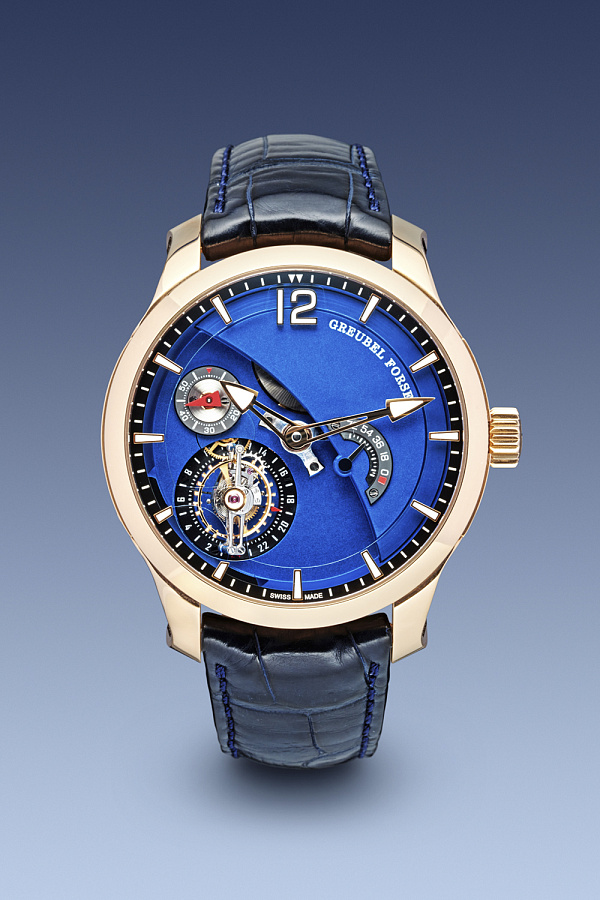 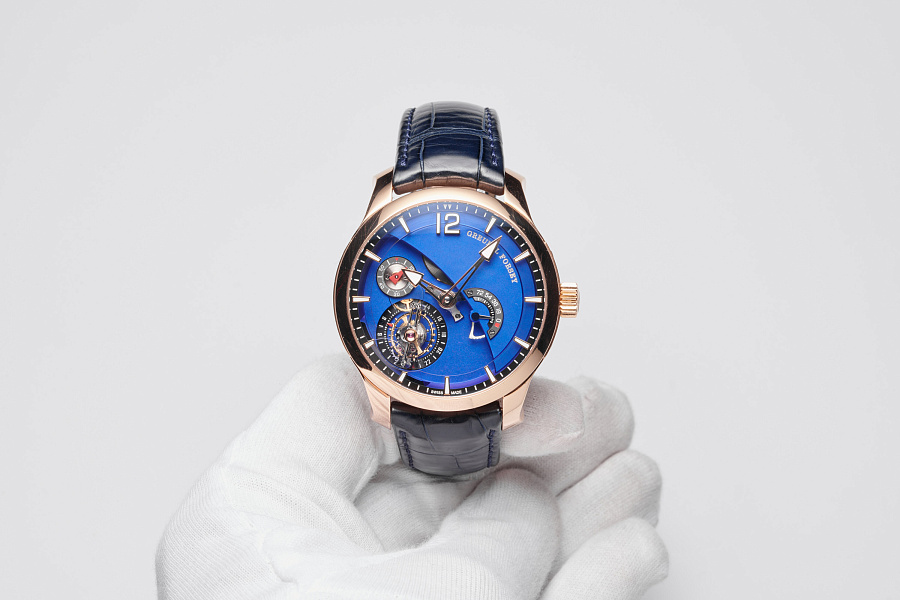 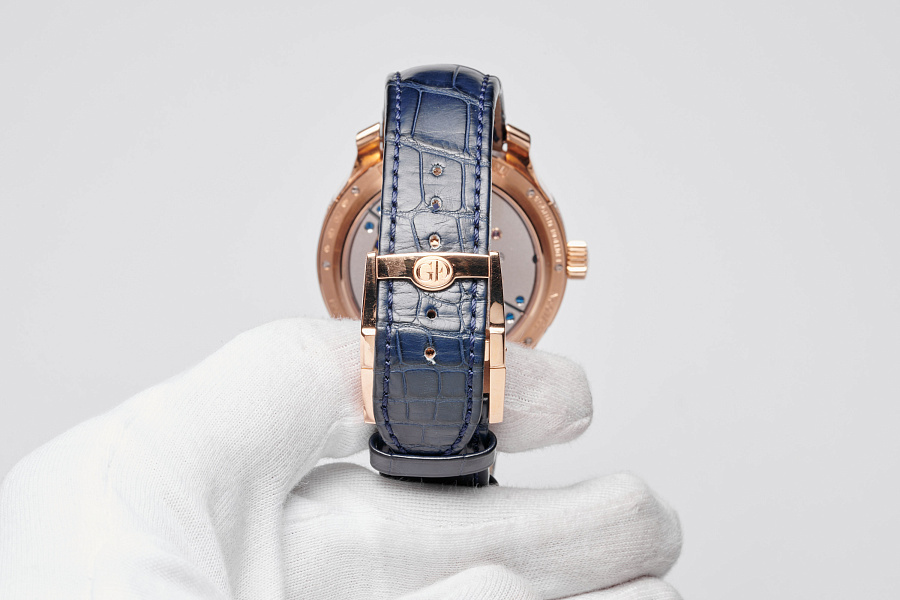 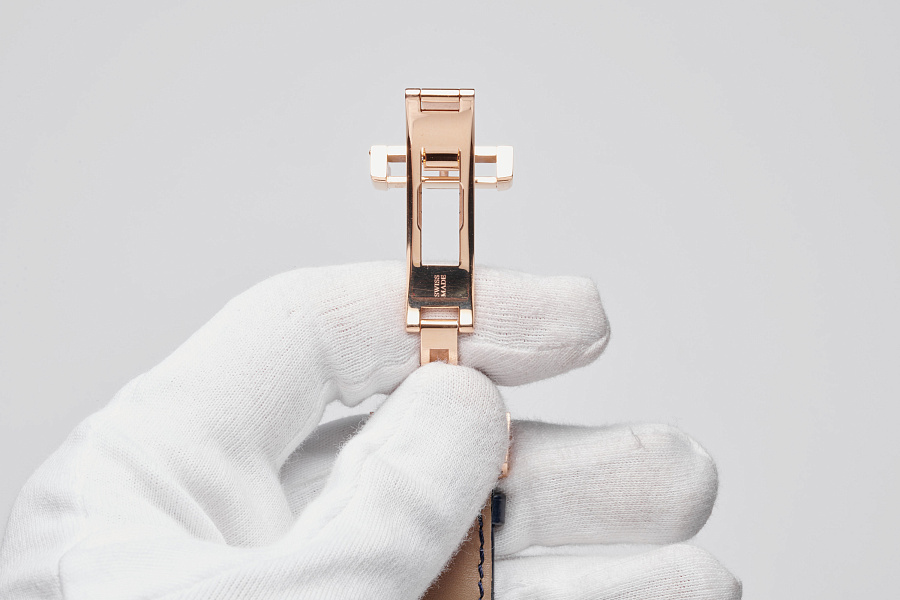 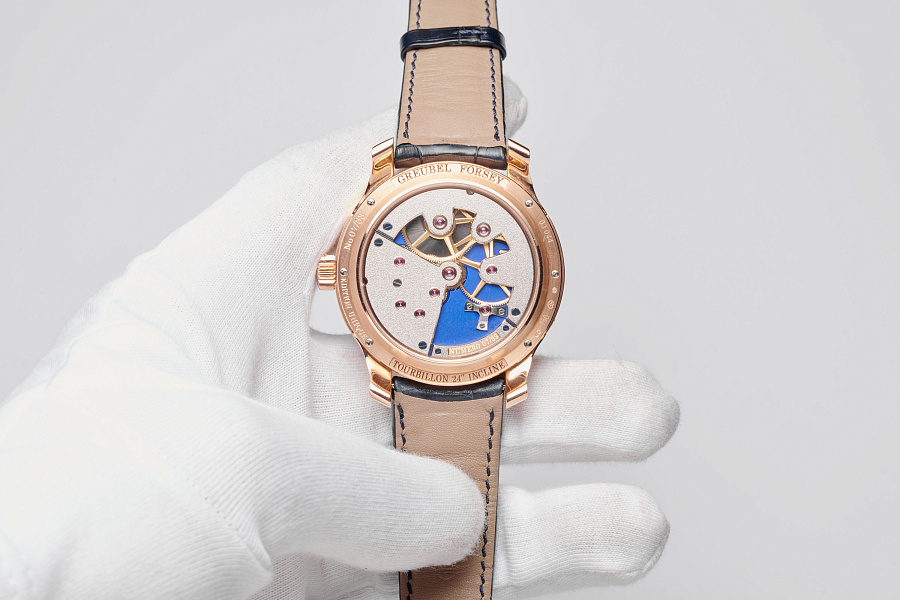 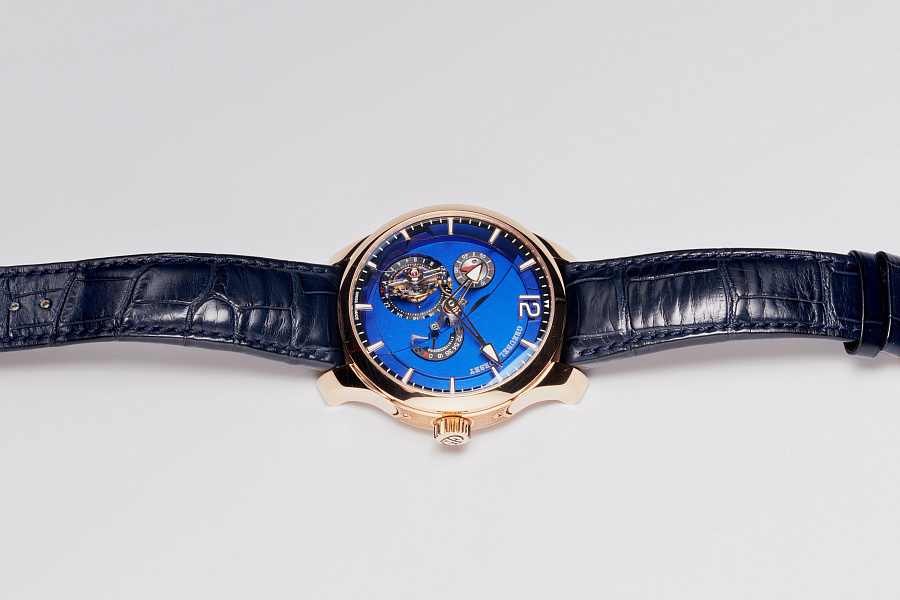 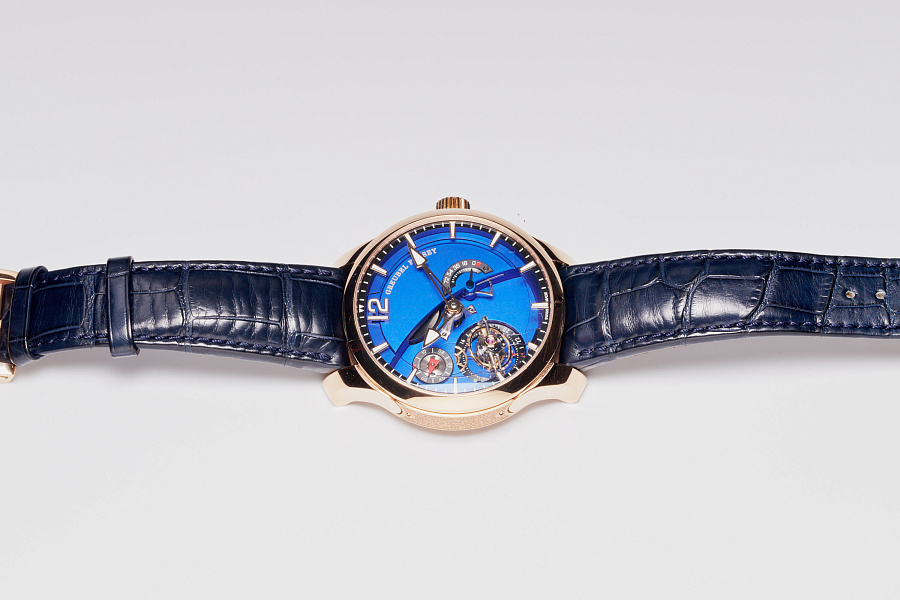 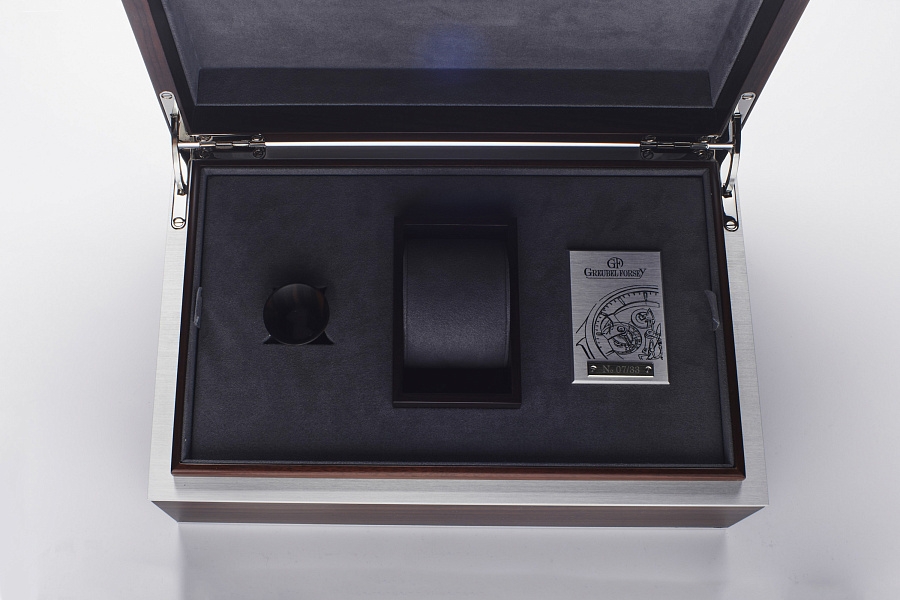 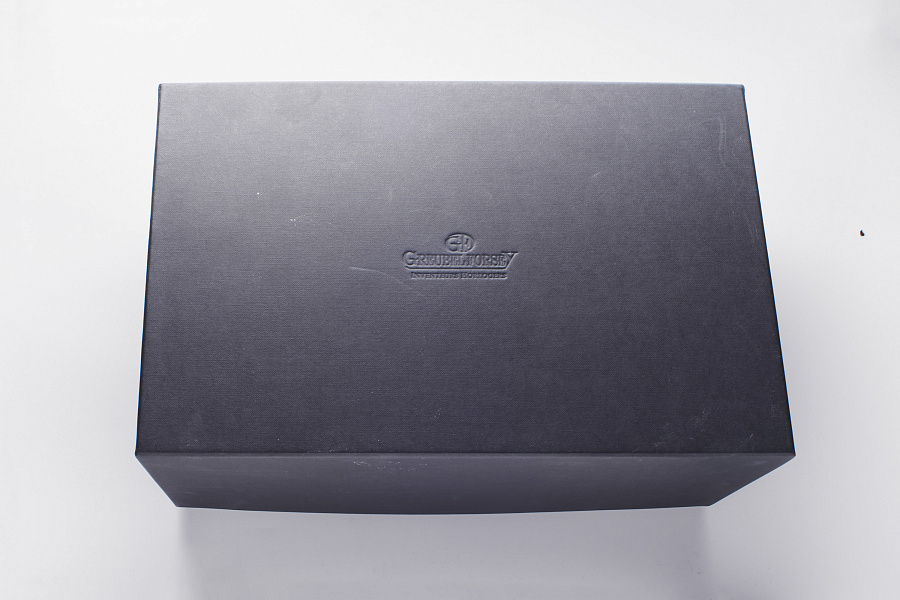 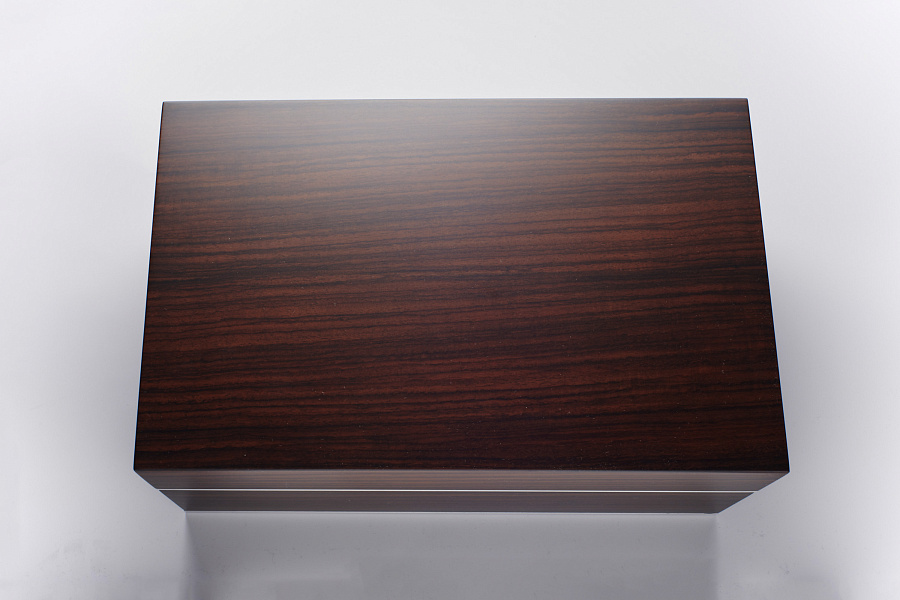 The peculiarity of Greubel Forsey is that it produces exclusively collectible watches. This specialization forces the brand to follow very strict standards in all aspects of watchmaking – in the development of movements with unique complications, almost flawless and recognized by experts as one of the world’s finest in the finishing and decoration of all parts, and in the creation of a branded design. In less than two decades, the brand has achieved recognition and a high reputation, and many of its models released during this period will continue to appeal as monuments to the renaissance of fine watchmaking that the industry enjoyed in the 2000s and 2010s.

The present example closes the list of models of the imposing version of the Contemporain design with blue movements (dials).

The T24Si model, with a 24-second inclined tourbillon, was introduced in 2006 – just two years after the brand was founded. A specific feature of the movement developed by Greubel Forsey was the balance shaft, which is inclined by 25 degrees relative to the tourbillon axis and which, according to the inventors, contributed to better chronometric quality. In addition, the 24-second period of the tourbillon was at the time the fastest in the industry for a traditional gearing scheme. From the point of view of the collector and connoisseur of high watchmaking art, the fast-rotating tourbillon’s visual impact was an indisputable advantage of this design. Early T24Si models were made in the original Greubel Forsey style, which since 2004 has been perceived as a classic of this brand. The new Contemporain style emerged in 2012 with the launch of the platinum Tourbillon 24 Secondes Contemporain, a reinterpretation of the inclined 24-second tourbillon. The titanium mainplate of the movement is exposed on the dial side and features a ‘royal’ blue oxide treatment, enriched with fine frosted hand finishing, a kind of brand signature. The arcuate deep step of the main plate on the side of the dial is used for the exhibition setting of the tourbillon, the axis of which is fixed on top in a transparent sapphire V-shaped bridge.

The finishing, made according to the standards of haute horlogerie, is one of the undoubted advantages of this model.

The design of the present reference, introduced in 2013, was made on the same principles. Together with the 2012 platinum model and the Diamond Set Greubel Forsey Tourbillon 24 Secondes Contemporain high-jewellery model in white gold, released in just a few pieces, the present example closes the list of models of the imposing version of the Contemporain design with blue movements (dials). The release of Tourbillon 24 Secondes watches with blue calibers (dials) was not resumed, which allows us to perceive the present lot as a very attractive collectible.

The finishing, made according to the standards of haute horlogerie, is one of the undoubted advantages of this model. The bridges, in nickel silver with a nickel-palladium finish, are frosted and straight-grained with hand-polished bevels, with the extremely laborious fine polishing of internal sharp corners – a job that many other brands prefer not to do. The chapter ring is made as a transparent sapphire ring, while the small seconds dial and power reserve indicator are in gold. The 18k rose gold case features side plates depicted with a message from the founders of the brand in miniature letters, engraved in relief.

The Greubel Forsey Tourbillon 24 Secondes Contemporain Edition Unique would appear to be an excellent purchase, a real must-have for the collector who desires an extremely fine, rare and impressive limited-edition complicated wristwatch from a world-famous brand, one of the important newcomers to the haute horlogerie watch market. The combination of impeccable technical workmanship, exquisite artisan finishing of the movement, and its unusual and recognizable design, adds to the appeal of this lot.