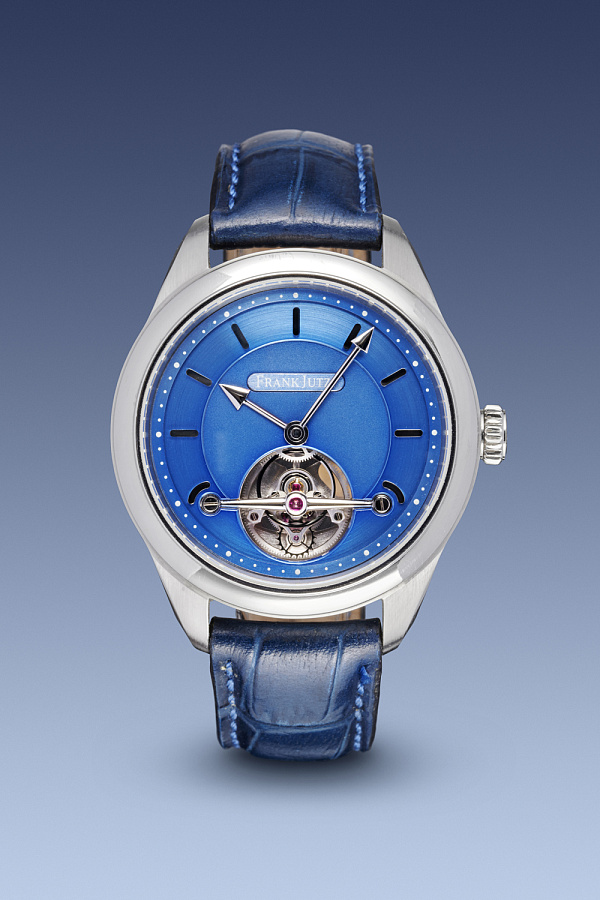 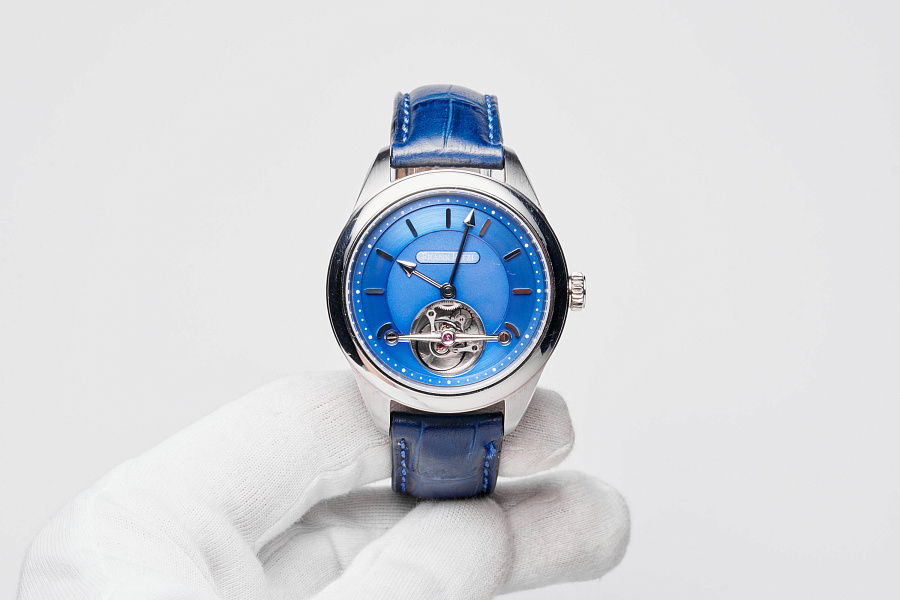 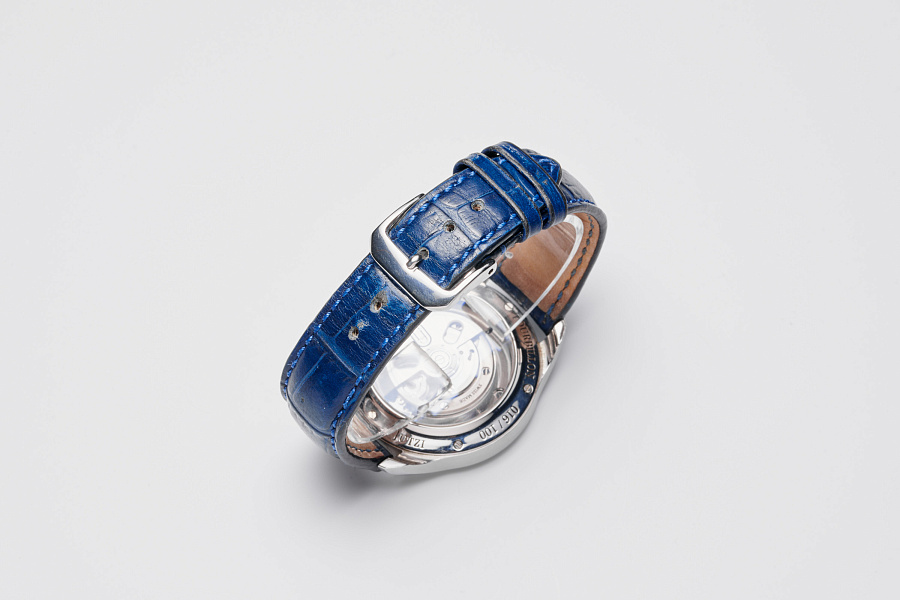 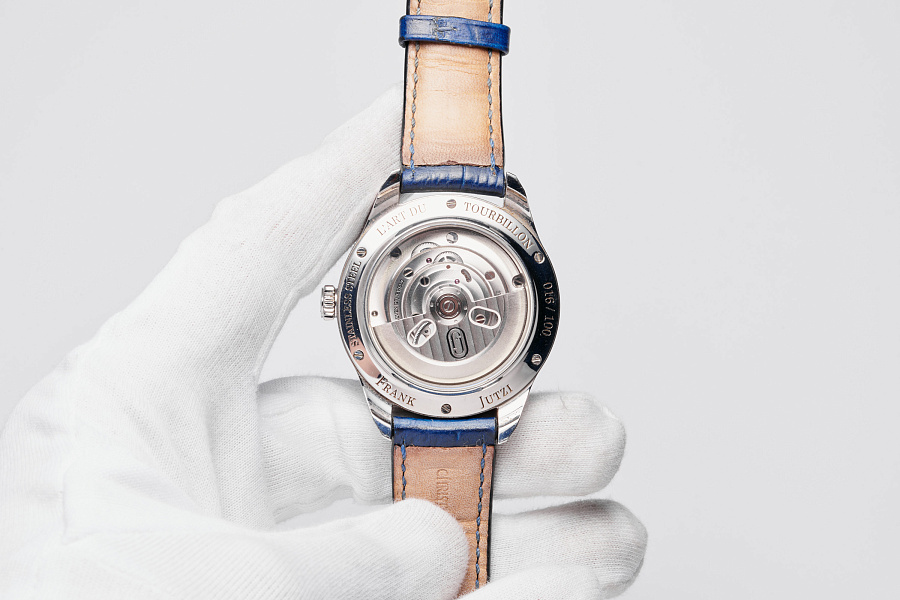 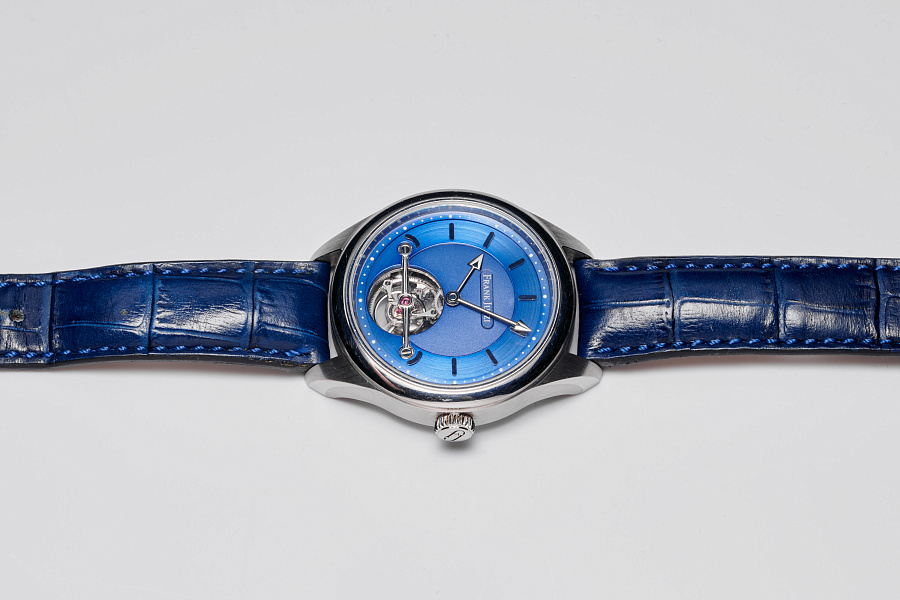 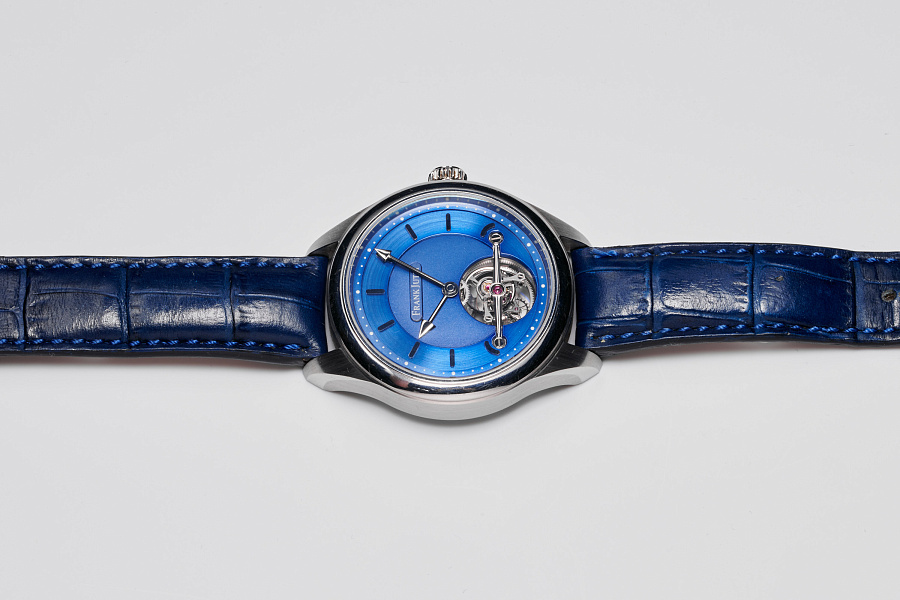 Frank Jutzi, the Swiss independent clock- and watchmaker, took his first steps in the profession by creating an astronomical clock with a skeletonized movement. In 1985 he opened his own studio for the restoration of antique clocks, gaining the experience that led to him entering the world of independent watchmaking. In 1998 he exhibited a two-month operating grandfather clock with a transparent movement at the Académie des Horlogers Créateurs Indépendents (AHCI) booth in Basel Fair, gaining the status of AHCI candidate. In 2000 he was accepted as a member of the Académie as an acclaimed master of unusual and mysterious clocks, and collectible watches. His studio is located in rural Wichtrach in the neighbourhood of Bern. His first tourbillon wristwatch appeared in 2001 when he participated in the widely known ‘Seven Masters’ project of the Egana Goldpfeil Group, where he was one of seven selected members of the AHCI who took part.

The classic design of the case and movement is bestowed with a spectacular multilevel dial and intrinsic Frank Jutzi polished and sculptured arrow Wichtrach ploughshare-style hands.

The tourbillon is considered one of the greatest challenges for any watchmaker. This ingenious principle, invented by Abraham-Louis Breguet more than two centuries ago, was conceived to compensate for the negative effect of Earth’s gravity on the regulator of the watch movement. Frank Jutzi has expressed his fascination of watch mechanics in a variety of tourbillon clocks and watches. L’Art du Tourbillon, a limited series of automatic wristwatches in 18 carat gold or stainless steel, was embodied with great respect to the traditions of Swiss watchmaking art while resolutely reflecting his own style and approach to watchmaking. The classic design of the case and movement is bestowed with a spectacular multilevel dial and intrinsic Frank Jutzi polished and sculptured arrow Wichtrach ploughshare-style hands. The origin of the particular shape of the hands is in the ancient heraldic coat of arms of the town of Wichtrach – the ploughshare being regarded not only as a rural symbol, but also as the emblem of a birth of the life. That is why Frank Jutzi pays special attention to the fine finishing of the symbolic hands of L’Art du Tourbillon watch, as well as to the traditional steel tourbillon bridge set from the dial side of the watch, taking into account the symbolic value of the tourbillon as the finest watchmaking complication.

The classic and modest 36mm round stainless steel case, attractive and finely made multilevel textured blue dial with branded Wichtrach ploughshare-style hands, and the transparent caseback revealing the high-quality self-winding caliber, make L’Art du Tourbillon Limited Edition watch not only an appealing collector’s item, but also a sophisticated everyday wearer, provoking interest and being a real conversation starter. The present lot would be an excellent purchase for the collector who desires a rare and complicated watch of an independent watchmaker, a piece of history of modern haute horlogerie.