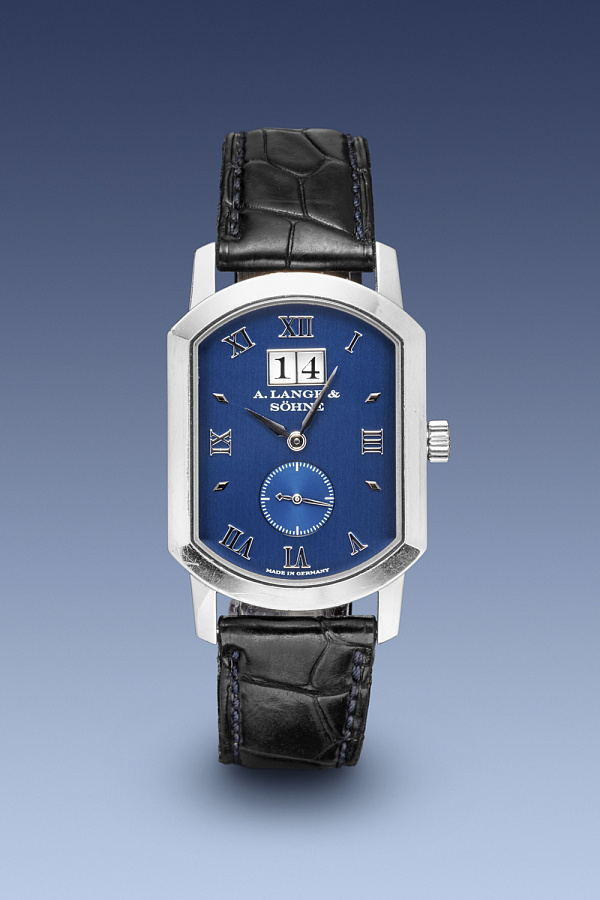 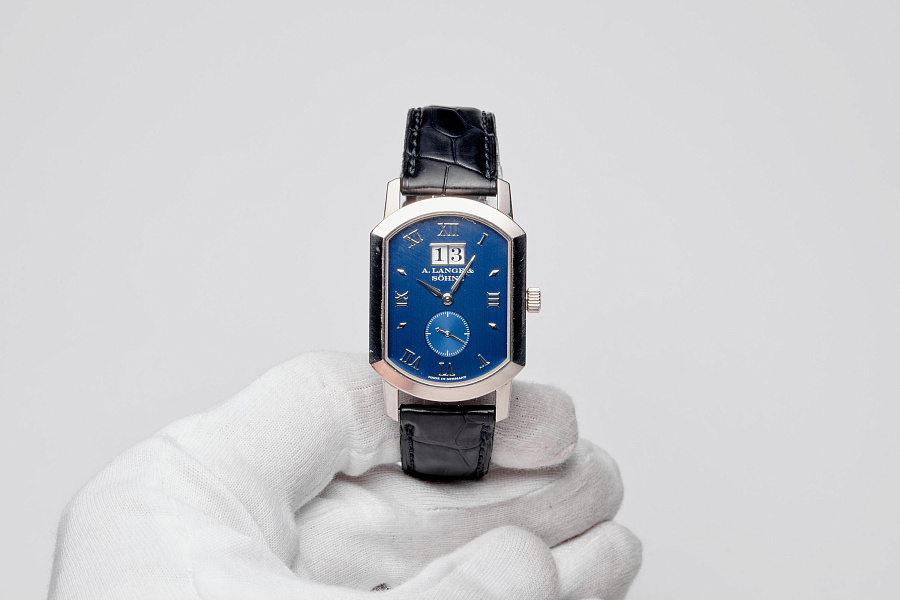 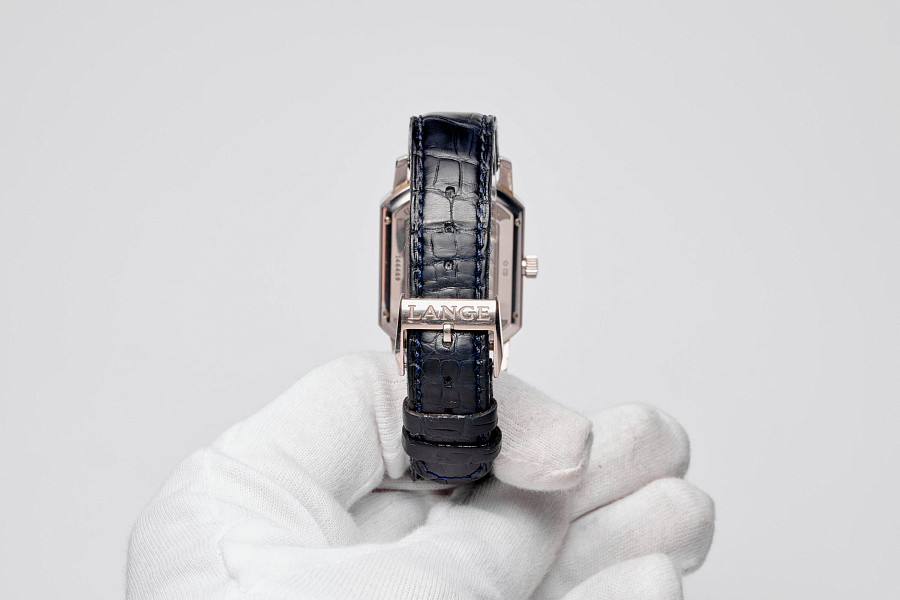 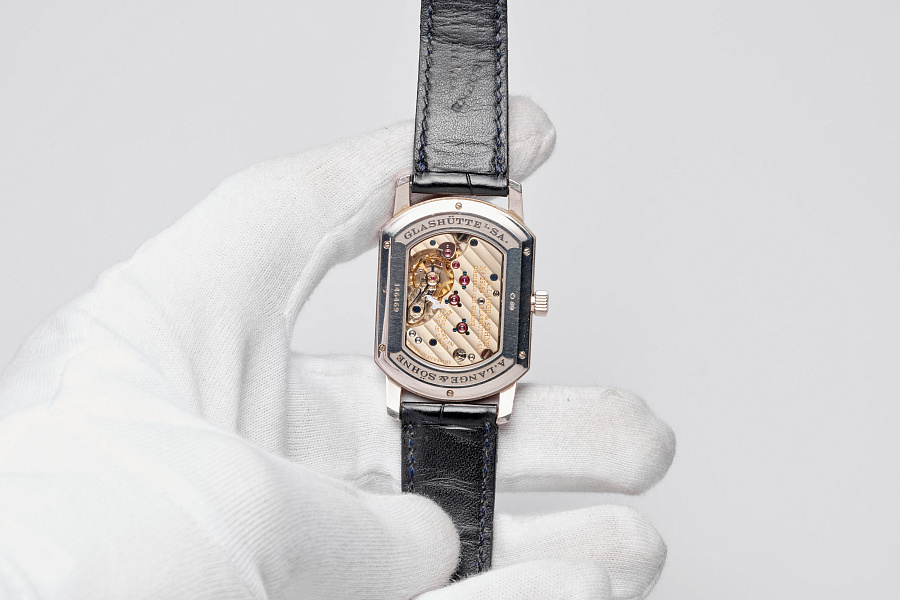 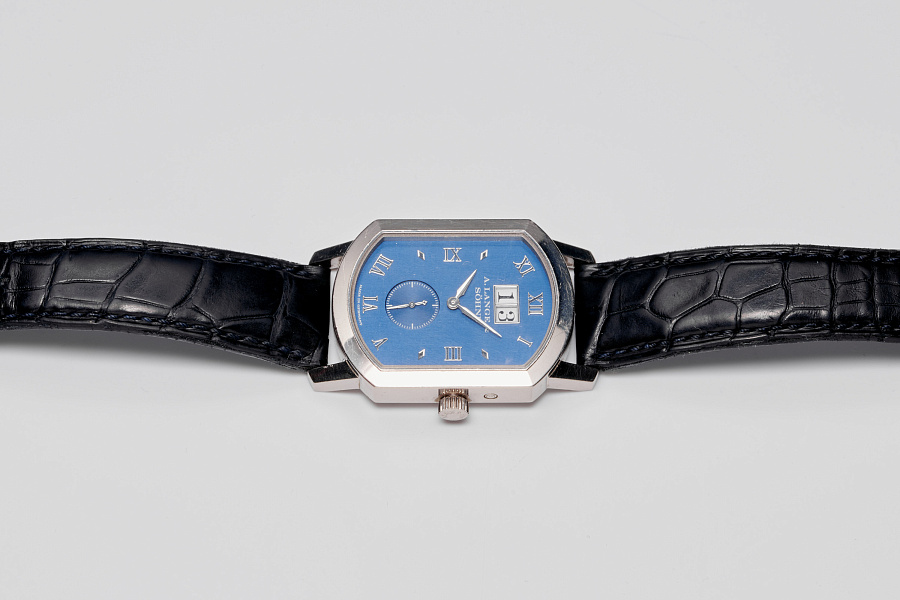 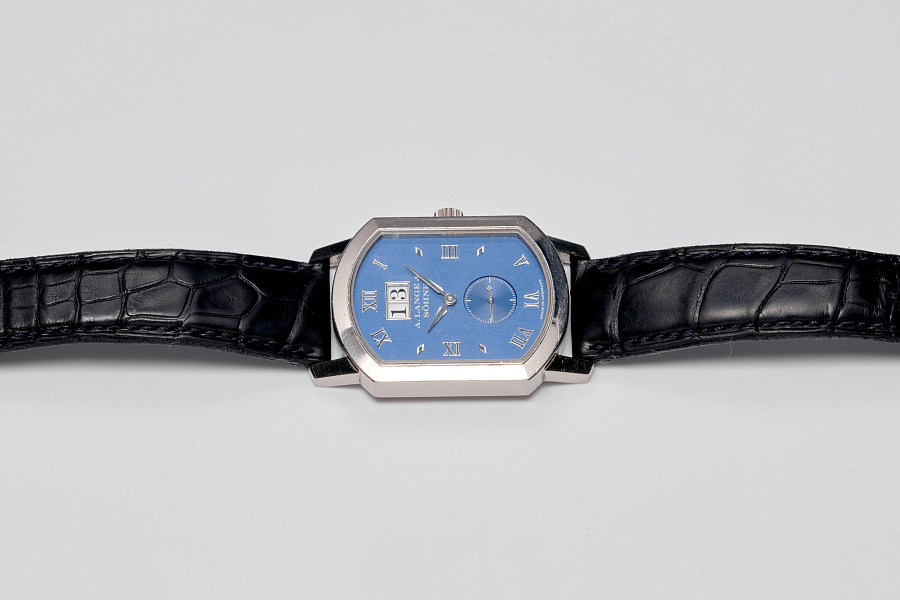 The Arkade watch is one of the inaugural four models presented by the revived German watch brand at its first historical presentation on October 24, 1994. The original Arkade models are women’s watches with a small and unusually-shaped 22.2 x 29mm case in the form of a rectangle with two arched parts at the top and bottom. This watch had several remarkable features, thanks to which it will remain in the history of watchmaking as a watch that certainly deserves the attention of a collector and connoisseur of watchmaking art. In addition to its unusual form, the movement is shaped to match the case – a sign of high class typical for Lange. The superior level of watch mechanics and finishes in all parts is also typical for Lange, as well as the stunning ratio of the large date display in relation to the case.

All of the above applies equally to the larger 29.5 x 38mm Grand Arkade collection launched in 2002. It was presented in several references (platinum and three colours of gold, as well as several jewellery models), intended by the brand for a male audience, or for ladies who preferred large watches. The market situation, where buyers preferred A. Lange & Söhne’s round classic and complicated watches, together with the brand’s relatively weak position in the women’s watch market, forced it to discontinue this collection in 2005. However, for a true connoisseur, these circumstances contribute to rather than hinder the appeal of the Arkade and Grand Arkade watches. Clearly, the costs of small-scale production did not allow the brand to keep the price of these watches at an acceptable level. They were perceived as unreasonably expensive, so both demand and production were low. The obvious rarity of them and the equally obvious high level of workmanship justify their collector’s appeal.

The present reference was produced for a limited period, from 2002 to 2005. Moreover, the vast majority of the Grand Arkade’s release came in pink and yellow gold, while the blue-dial Grand Arkade Ref. 106.027 was comparatively rare. Ref. 106.027 is nowadays very rarely found on the market of previously-worn timepieces, and therefore should be considered as having the highest perceived value as a collector’s item.

The obvious rarity of them and the equally obvious high level of workmanship justify their collector’s appeal.

In addition to the collectible aspect, one should also note the undoubted attractiveness of the design, with its white gold case and vivid blue dial with a slightly recessed sub-dial for the indication of the seconds. The Grand Arkade is powered by the same hand-wound 42-hour power reserve caliber L911.4 of Arkade watches, which was developed during the revival of the manufactory in the early 1990s and was used as a base caliber in the Grand Arkade and Arkade collections until 2010. One of the advantages of this caliber is its unique design and finish, which make it easy to distinguish A. Lange & Söhne watches from other high-end Swiss-made watches. This includes the signature three-quarter plate construction, with the mainplate and bridges made from nickel silver without plating and giving a nice-looking patina (which is easily noticeable on the movement of the present example); a big classic balance wheel with regulating screws; and screwed gold chatons, considered one of the most visible and valued hallmarks of Lange’s watchmaking artistry. The meticulous finishing with Glashütte stripes, blued screws, polished bevels, a swan neck micrometer regulator, and engraved and gilded inscriptions, makes the movement very eye-catching, while the traditional hand-engraved balance cock makes each Lange watch feel like one of a kind.

The Grand Arkade ‘Blue Dial’ Ref. 106.027 should be regarded as an excellent purchase for the collector who desires an outstanding, rare and attractive mechanical wristwatch from a world-famous traditional watch brand, the undisputed market leader in German high watchmaking. The combination of rare design features, including the spectacularly-shaped case, the juxtaposition of the white gold execution and the vivid blue dial, along with the big date indicator, typical for Lange watches of the modern era, make the present lot highly desirable. The exquisite finishing of the movement’s parts and its typical Lange appearance will impress the heart of any connoisseur, and A. Lange & Söhne’s reputation in these aspects should be recognized as impeccable.