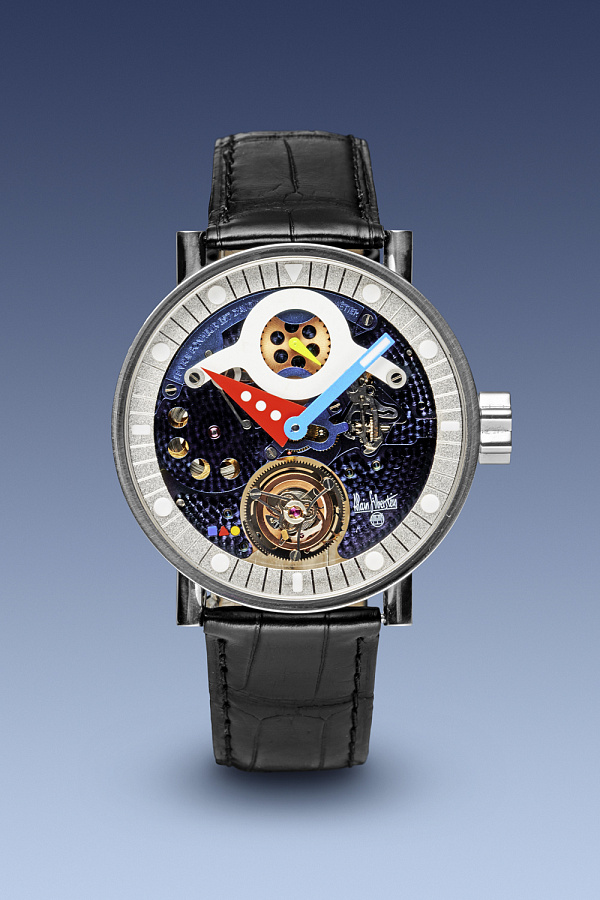 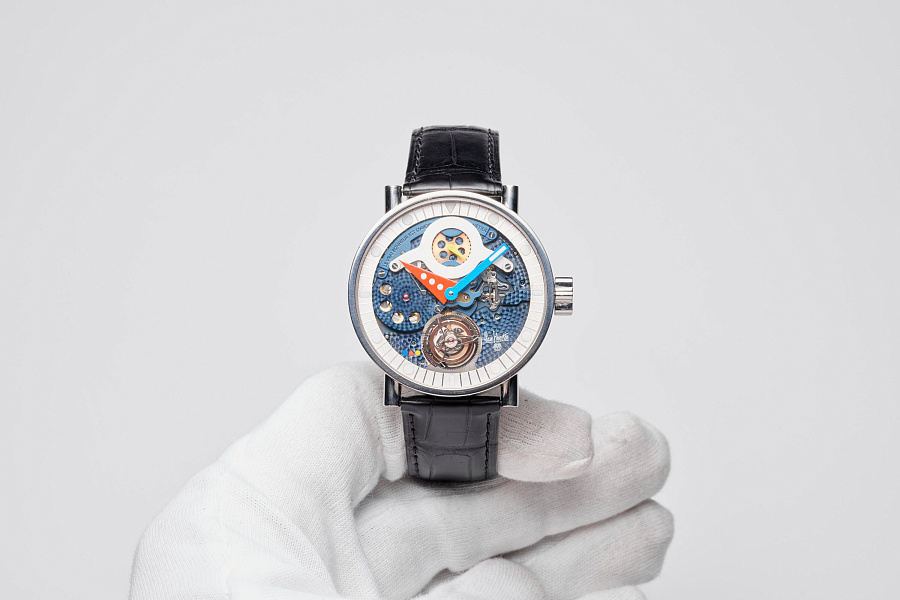 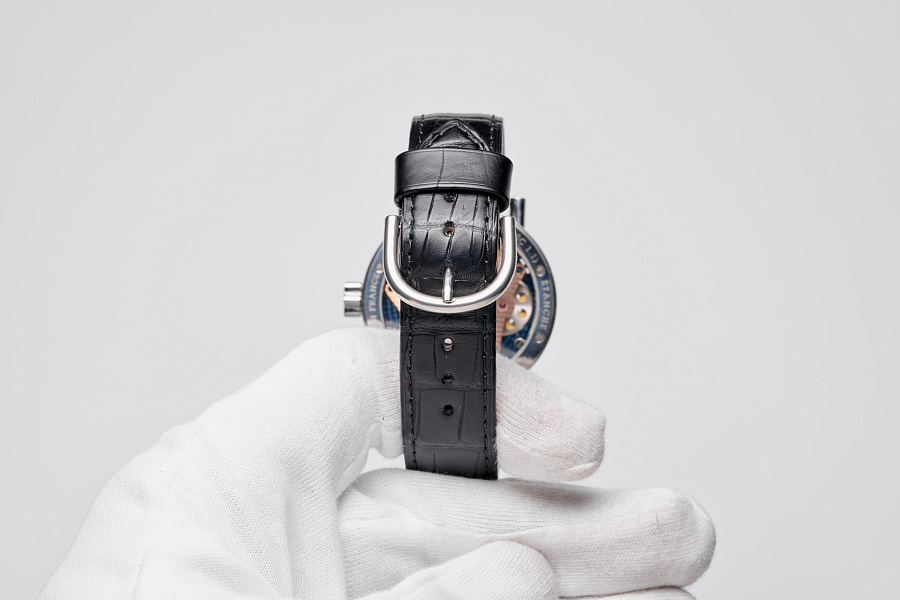 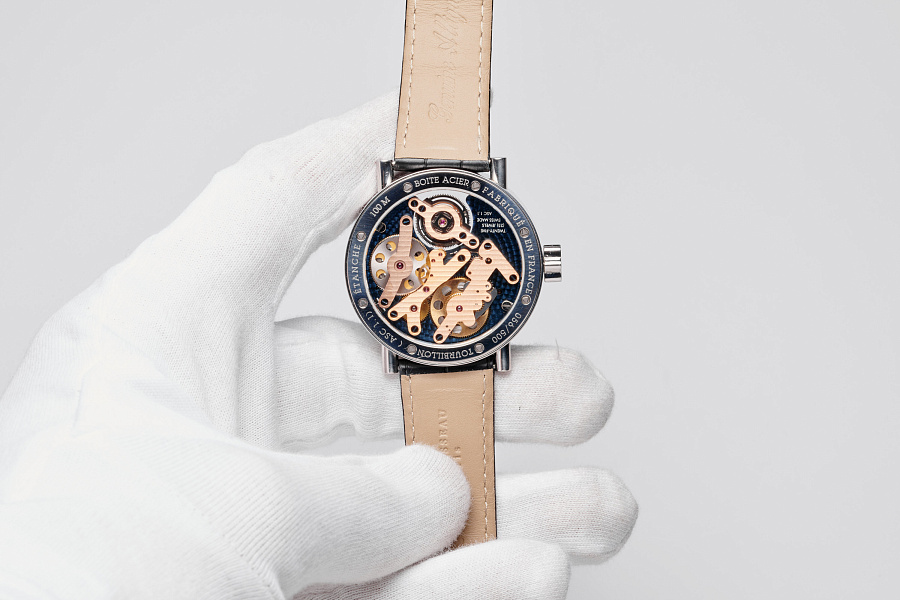 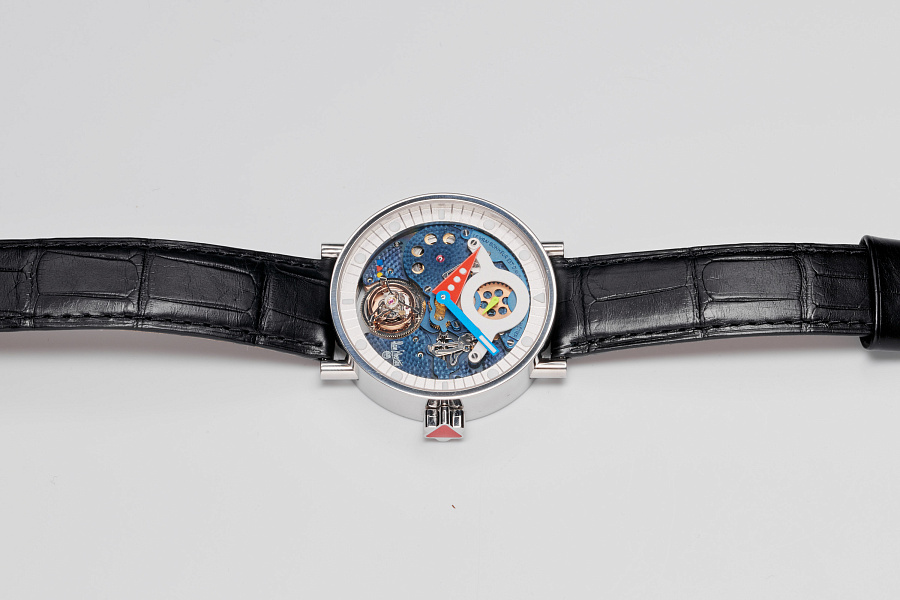 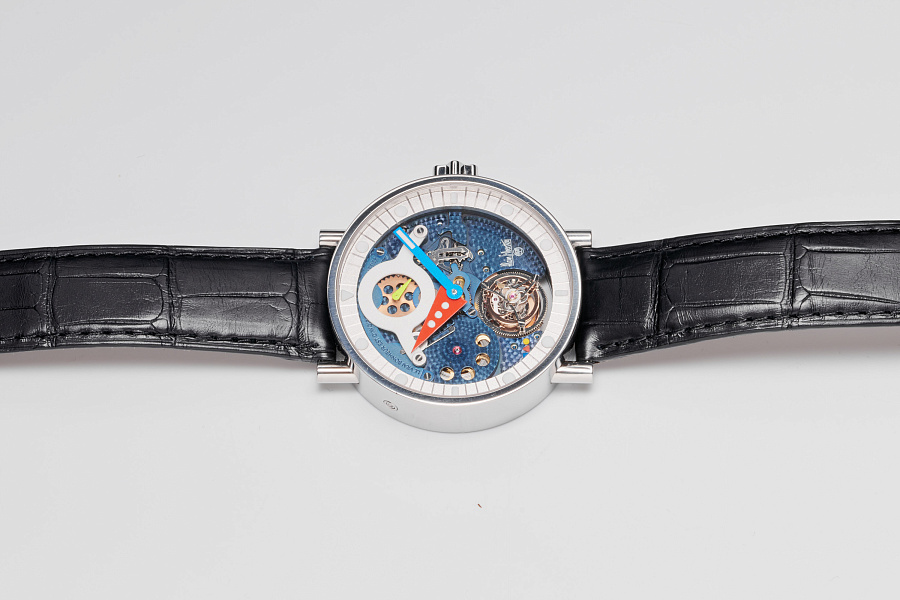 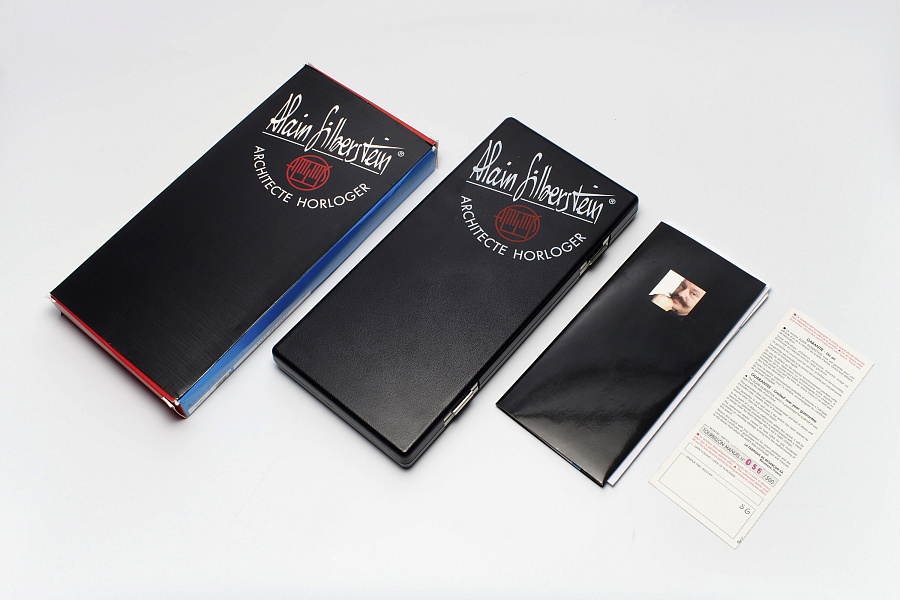 Alain Silberstein watches have had a strong charisma since the brand was founded, based on the unique vision of Alain Silberstein in his interpretation of the Bauhaus style, inspired by the art of Wassily Kandinsky. The typical design for the brand includes the use of the primary colours blue, red and yellow, and basic geometric shapes such as the circle, square and triangle. In addition, Alain Silberstein was prone to experimentation and risky ventures, which include the present limited edition. The Alain Silberstein brand went out of business in 2012.

The immediate impetus for the launch of the present limited edition was the widely promoted plans of the Swiss movement manufacturer Progress Watch to set up the production of a large volume of affordable tourbillon movements, which would allow the production of a Swiss-made tourbillon watch worth about 20,000 francs. Such watches were immediately nicknamed the ‘people’s tourbillon’. Caliber 6361, the Progress Watch tourbillon movement, leveraged many Eta 2892-A2 components, a situation that in 2001 caused conflict with Eta and the Swatch Group. Internal difficulties and liquidity problems hindered further production and the company declared bankruptcy later that year. Progress Watch was purchased in 2003 by new investors and renamed Swiss Time Technology (STT). The company diversified and turned their focus away from affordable tourbillons. During this time, the 6361 tourbillon caliber was further developed and renamed to cal. 13.21, with a longer power reserve and other modifications. STT was subsequently purchased by Bovet in 2006, so the original tourbillon movements produced were no longer available to purchase by former clients.

The production period of the Tourbillon Volant was short, the number of pieces produced was small, and the extraordinary design and the rare blue execution of the present example certainly add to the appeal of this lot, a piece of history of modern haute horlogerie.

The caliber 6361/13.21 in Alain Silberstein’s modification has a special design with an entirely opened dial and bridges in an extravagant shape reminiscent of Chinese characters. The mainplate and some bridges of the present example are decorated with perlage and blue PVD, which gives the watch an unexpectedly fresh look.

In our research, we were unable to find any examples that were numbered 100 and over in the limited edition. Moreover, we were not able to find duplicated numbers of steel watches similar to the present lot but in a different execution, such as a rhodium-plated or with a blackened caliber. Therefore, we think it’s reasonable to assume that the original 500-piece limited edition comprised various versions, including the present blue version. Phillips auctioneers also speculate that “the production run of these flying tourbillon was never completed, making these an uber rare timepiece by the eccentric brand that never settles to think inside the box”.

These assumptions are at least consistent with the rarity of the appearance of various versions of the Tourbillon Volant on the market, so we are inclined to agree with the opinion expressed by Phillips auctioneers and consider this limited edition watch to be extremely attractive as a collector’s item.

The Alain Silberstein Tourbillon Volant Blue PVD Limited Edition would be an excellent purchase for the collector who desires a rare and complicated mechanical watch of a small independent watchmaking brand, eminent producer of unconventional and playful watches. The production period of the Tourbillon Volant was short, the number of pieces produced was small, and the extraordinary design and the rare blue execution of the present example certainly add to the appeal of this lot, a piece of history of modern haute horlogerie.