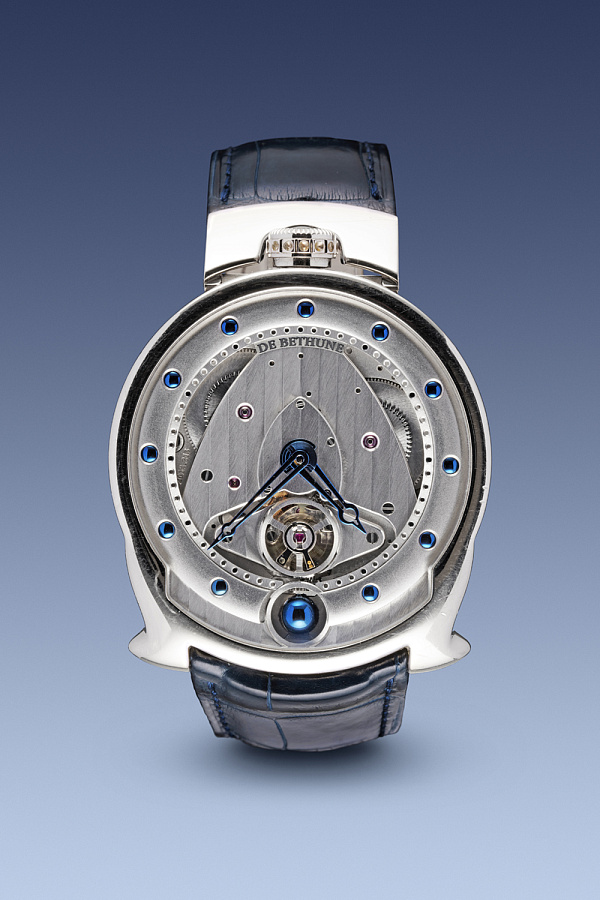 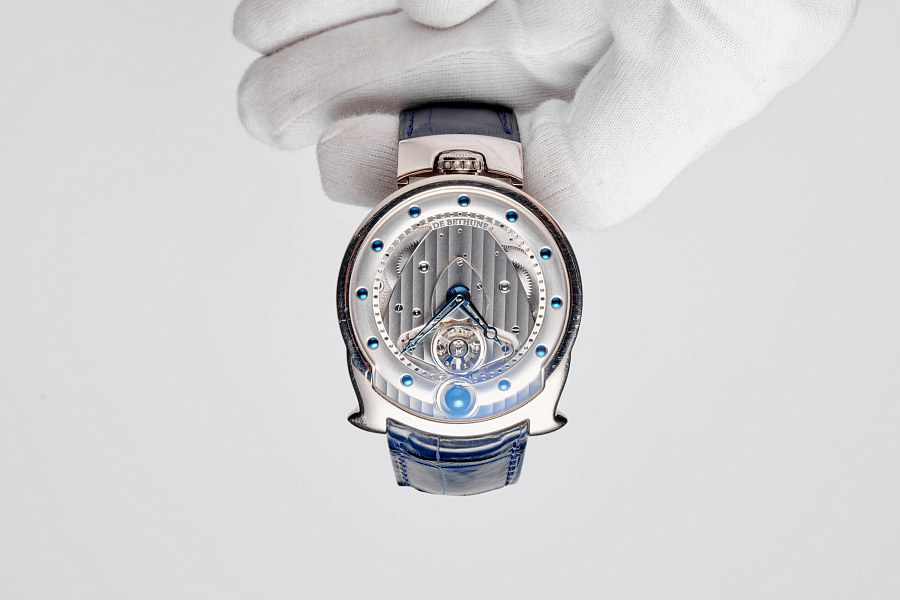 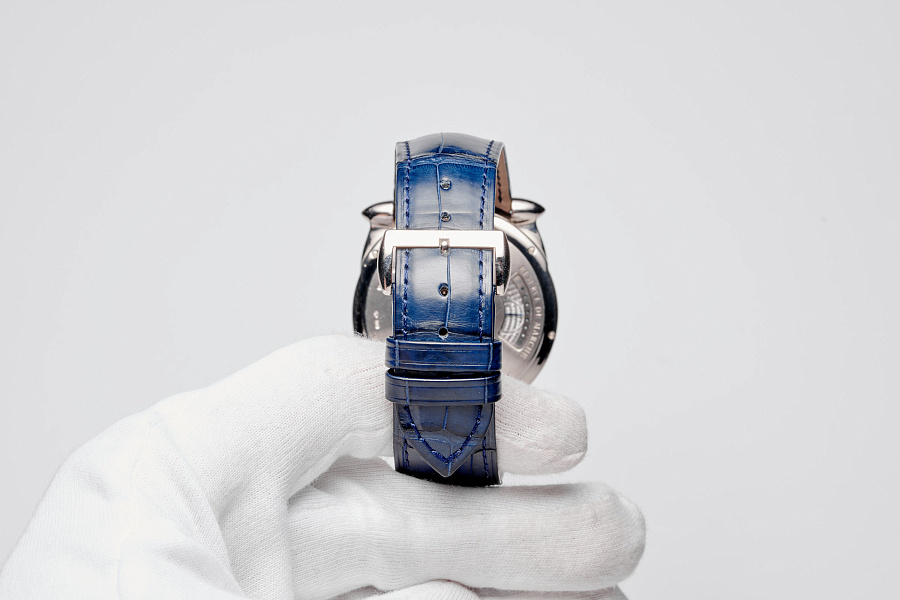 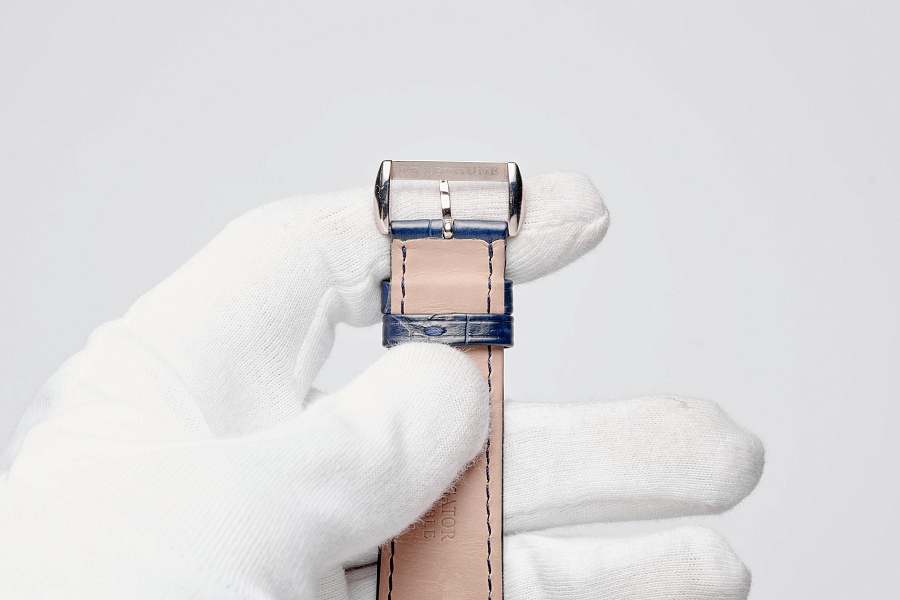 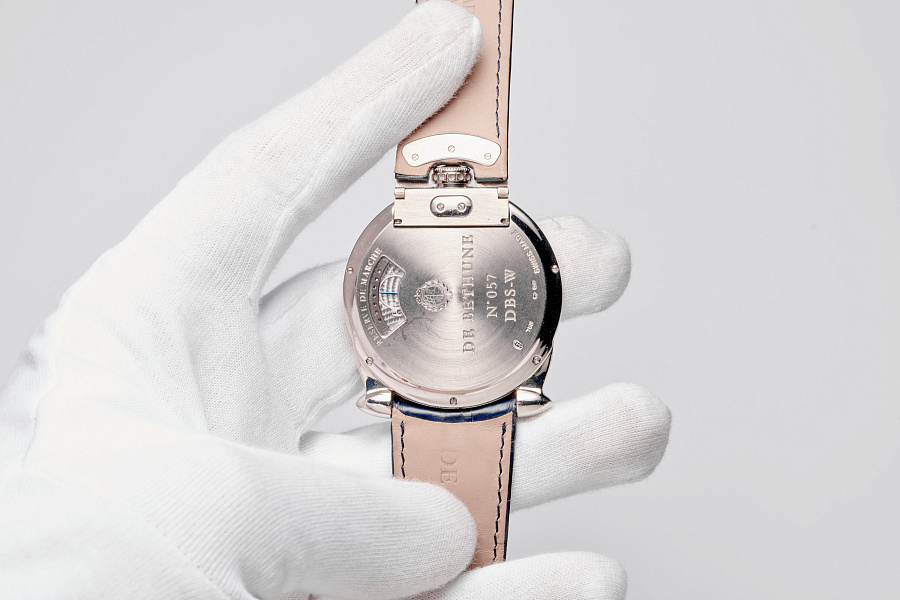 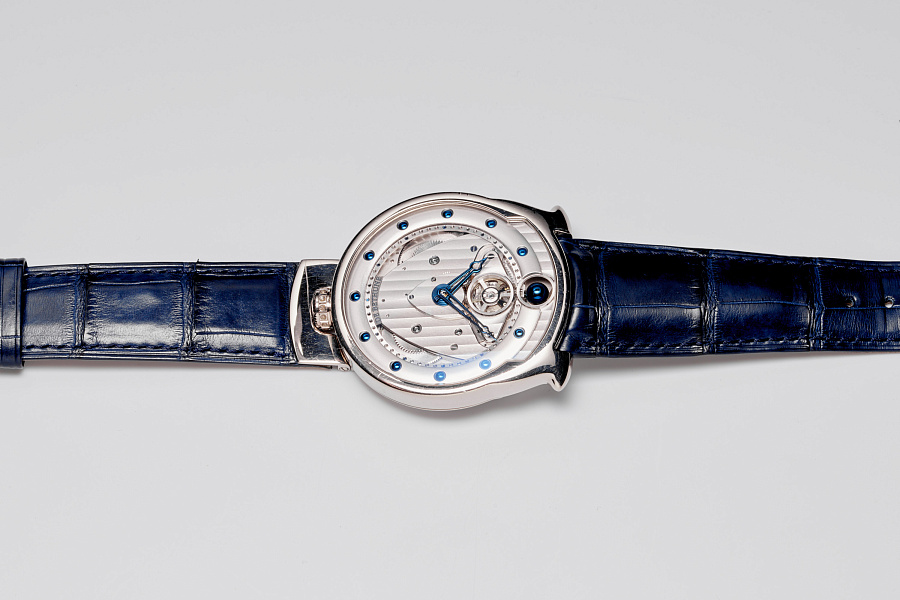 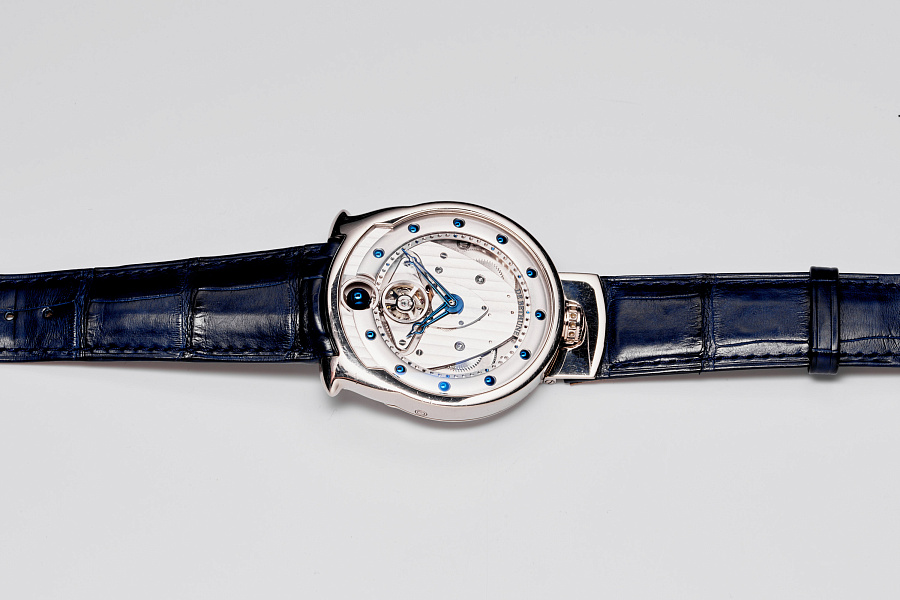 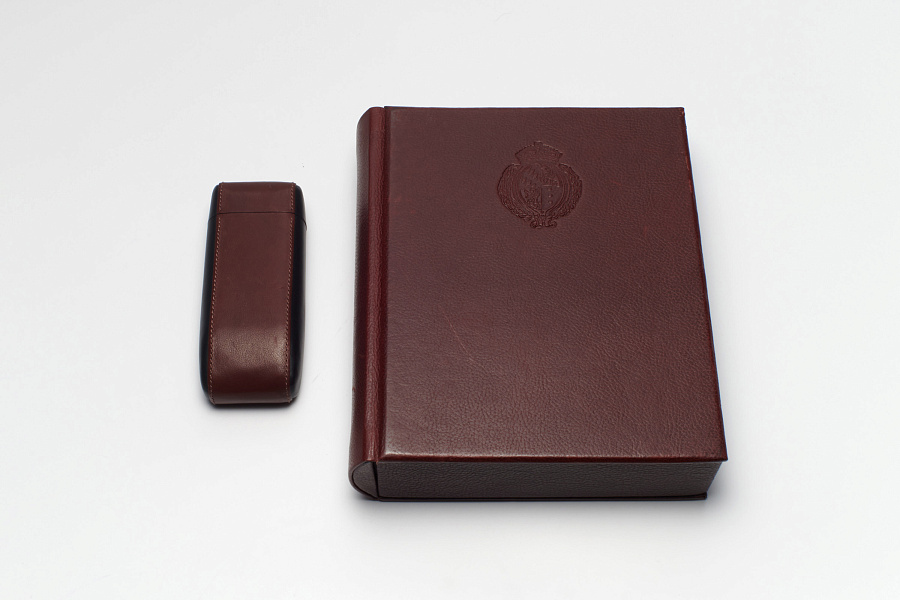 Throughout the history of the De Bethune brand, despite not being a long one, there have been many beautiful watches that are considered excellent collectibles. One of the early references, the release of which is currently known mainly to collectors and connoisseurs, is the DBS, the brand’s first avant-garde style wristwatch, introduced in 2005. Many design ideas were implemented in this collection, such as an unusual horse-shoe shape of the case, an in-house caliber with a visionary aesthetic open from the dial side, avant-garde hands, a unique style of dial markings and a unique design of the crown, to name just the most significant. To this very day they define the image of the brand’s watch collection. Therefore, the early references of the DBS collection, in our opinion, should be considered as historically important.

In particular, this applies to the present example as a representative of the first-generation reference DBS-W, issued in the footsteps of the platinum DBS Pièce Unique working prototype, which was submitted by De Bethune to the charity auction Only Watch 2005, held by Antiquorum.

From a technical point of view, the present watch differs from the DBS models of the second generation in the design of the balance unit. The first-generation DBS watches were developed before the implementation of the branded scheme with a triple shock resistance system, flat steel fixing springs and a resilient balance bridge, invented by Denis Flageollet and patented in 2005. In the present example, the balance bridge has a characteristic rhombus shape with an overlaid round skeleton part for beat adjustment, under which the balance is installed. As a result, the balance is barely visible. This is generally not consistent with subsequent designs of the balance unit, which were further developed by De Bethune, particularly in the second-generation DBS models (nine such references are known to exist). Note that the first-generation DBS has a simple monometallic balance, as the present example, which De Bethune later rejected in favour of sophisticated balances designed by Denis Flageollet, including in the second-generation DBS models.

A must-have for the discerning collector interested in acquiring one of the cornerstones of modern horology.

The first-generation DBS watches are notable for their avant-garde dial design. This refers to the dial’s transparency – so that the movement is fully visible; to the markings with blued steel hemispheres; and to the unusually-shaped hands, which are made as an allusion to the so-called Breguet hands, realized in a modern avant-garde style. It should be noted that DBS uses avant-garde ‘pomme de Breguet’ blued steel hands of the first generation with characteristic fan-shaped counterweights, which here have a stepped profile. Subsequently, De Bethune abandoned stepped counterweights in favour of flat counterweights.

Designed for the DB15 and DB16 models (launched in 2004), the movement’s signature architecture, featuring a centre bridge inspired by the Star Trek logo, was first revealed from the dial side of a DBS watch. The Star Trek design gives the DBS watch, as well as all subsequent releases made according to the same design, an impressive, charismatic character.

The spherical moonphase indicator, developed by De Bethune for its collection in 2004 and immediately realized in the DB15 series of perpetual calendar watches, is perceived as one of the symbols of the brand’s collection, and appears in a variety of versions. In this reference, this complication is presented in the most modest manner, with the dial carrying only the hands for the time display and a spherical moonphase indicator. A three-dimensional moonphase consisting of two hemispheres made of platinum and flamed-blued steel, is set at 6 o’clock, where the dial has an accented protrusion.

DBS ‘The First Generation’ Ref. DBS-W watches are very rare on the market, which is not a surprise in view of the small production run due to the transition to the production of watches of the second generation. Therefore, it would be an attractive purchase for the collector and De Bethune watchmaking expertise aficionado, with an opportunity to obtain a very rare, charismatic and historically important mechanical timepiece from this famous independent watch brand, one of the undoubted leaders in the haute horlogerie watch market. The present lot may well be considered a must-have for the discerning collector interested in acquiring one of the cornerstones of modern horology.

The keen collector should note that also offered for purchase in this sale is an impressive selection of De Bethune collectible wristwatches, including extremely rare ‘all blue’ DB28 Kind of Blue ‘Golden Hands’, DB28 Grand Sport ‘Grand Sailor’, the rare and desirable DB26 Perpetual Calendar ‘The Last’, as well as other fine and notable timepieces of the brand.