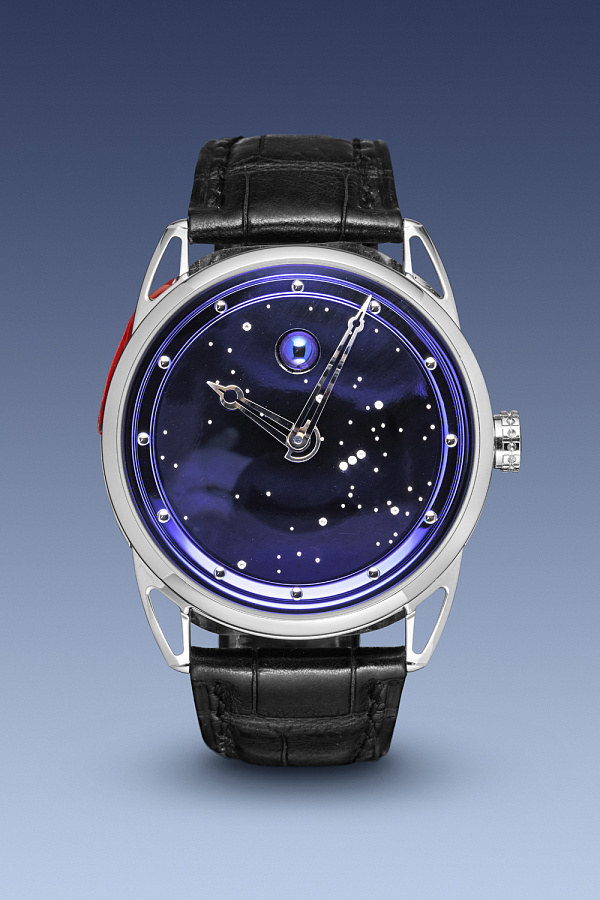 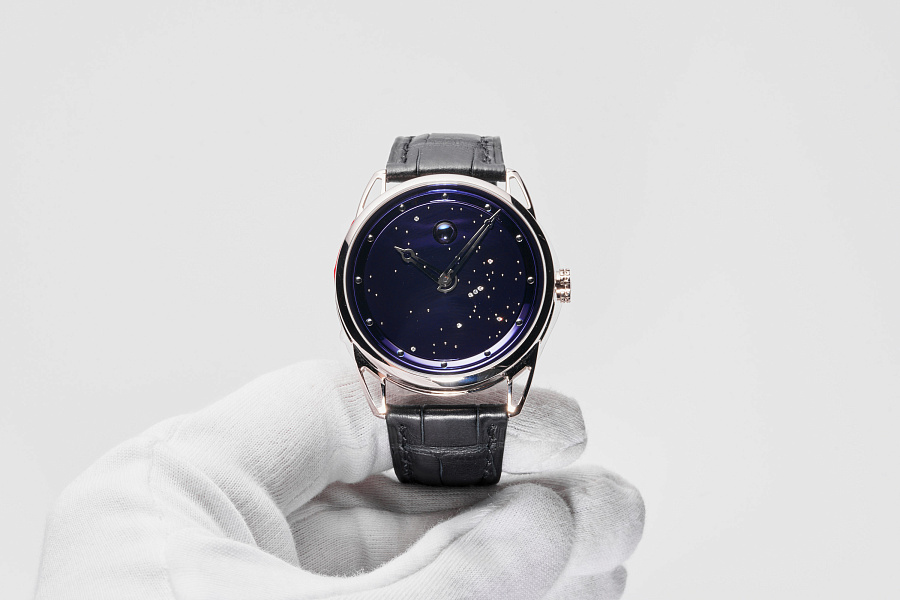 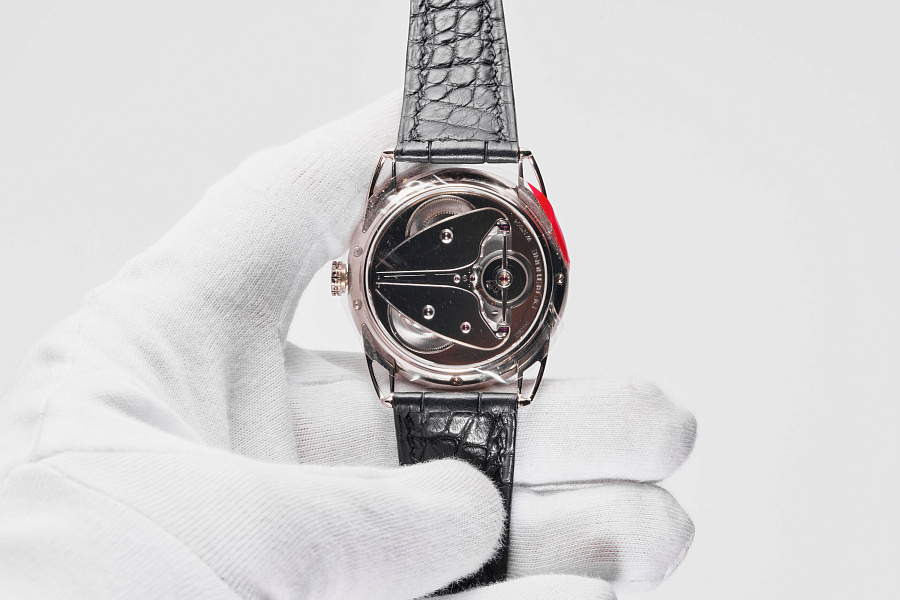 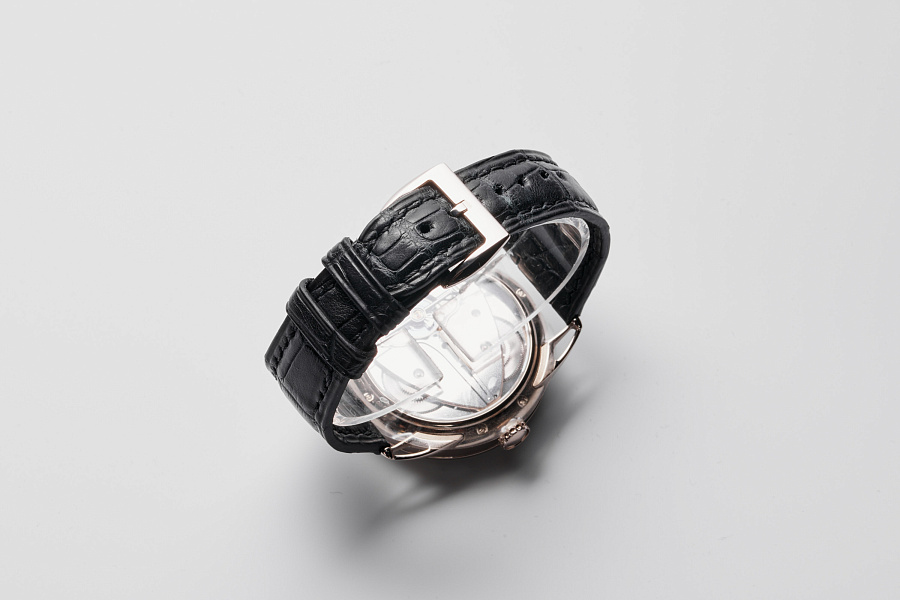 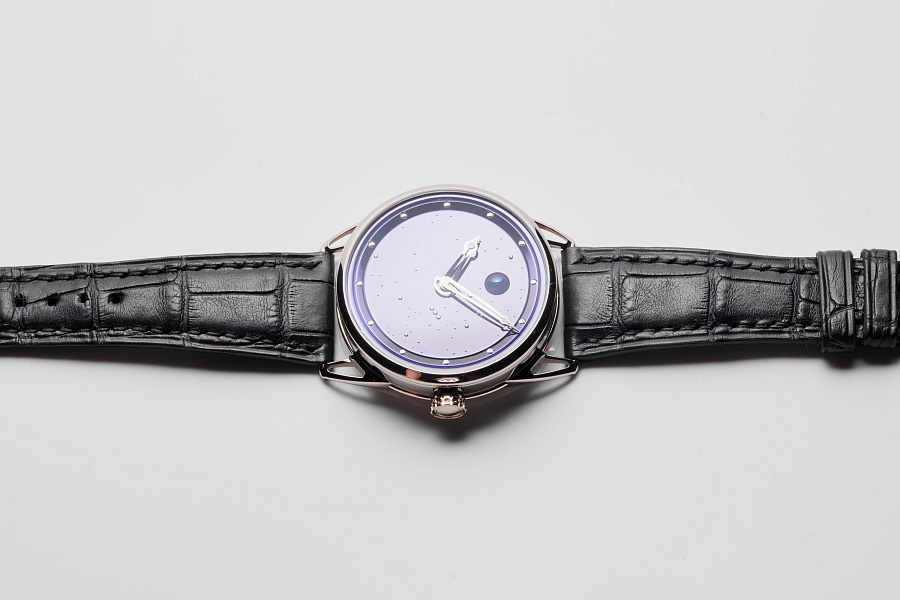 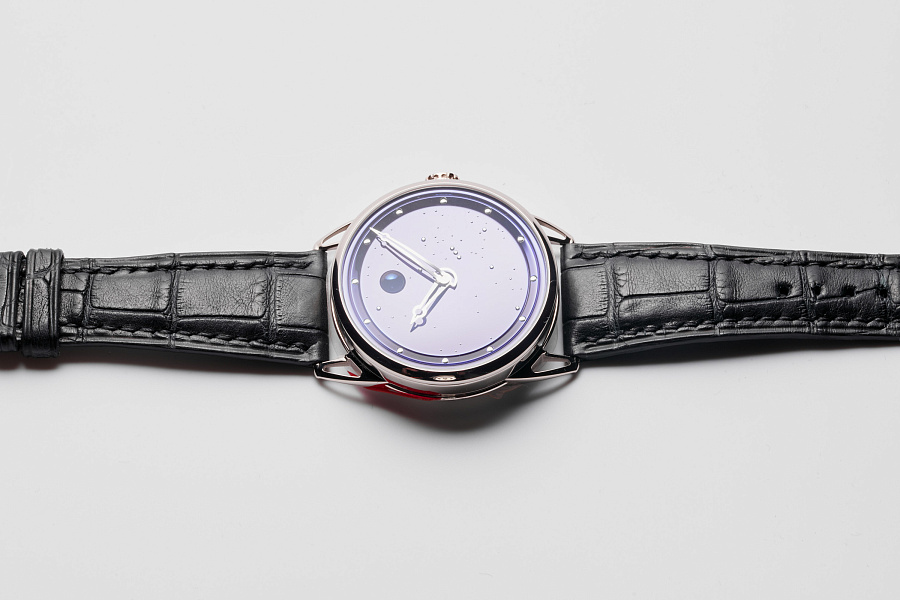 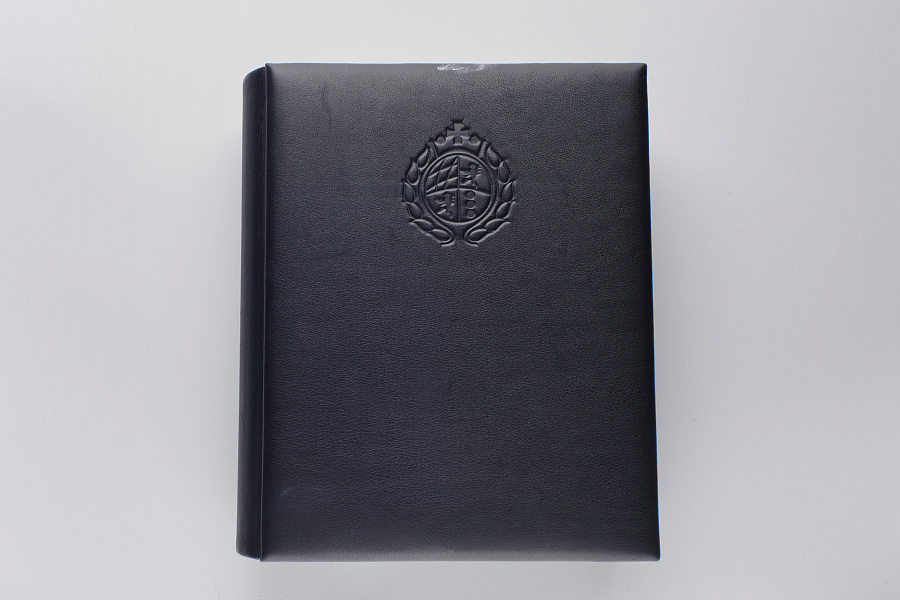 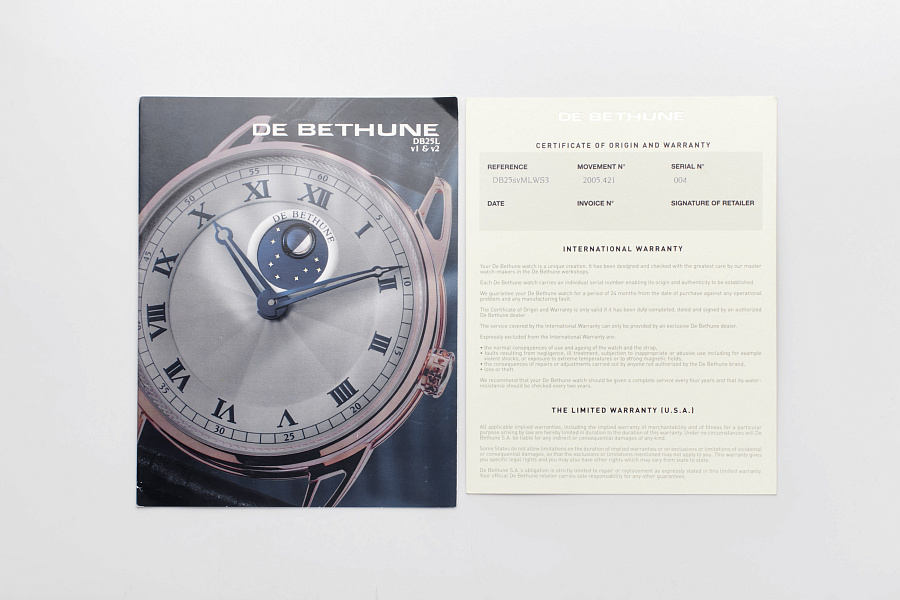 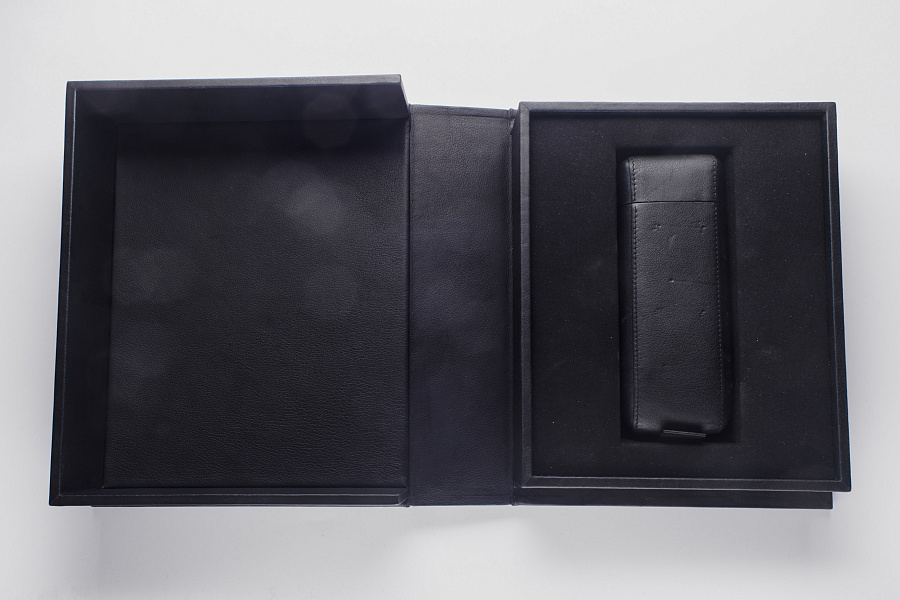 The DB25 Moon Phase Starry Sky Ref. DB25SVMLWS3 was launched in 2013 as a smaller (40mm vs. 44mm) version of the DB25 Moon Phase Starry Sky Ref. DB25LWS3V2 18k white gold moonphase model of the ‘hollowed lugs’ DB25 collection. The 44mm DB25 Moon Phase Starry Sky was introduced in 2010 and was quite popular compared to the majority of De Bethune releases, with the brand reporting 103 pieces having been produced since then. Both the 40mm and 44mm models were equipped with stunning blued and polished titanium dials resembling a starry midnight sky. A significant difference between the two models was the modified caliber DB2105, which in the 40mm model did not have a power reserve indicator on the reverse side of the movement, while the DB2105V1 caliber 44mm model was equipped with such an indicator. The movement of the present reference is finished in the characteristic De Bethune style, with a shield-shaped barrel bridge of so-called ‘Star Trek design’ and a distinctive mirror-polished mainplate and bridge.

DB25 Moon Phase Starry Sky Ref. DB25SVMLWS3 watches are extremely rare on the market, even in the standard version, while the present example with nonstandard-designed hands is even rarer, and possibly unique.

The DB2105 caliber, visible through the sapphire caseback, is an entirely in-house caliber. Having an impressive 6-day power reserve, it was developed in 2010 and embedded with patented and exclusive De Bethune innovations such as a silicon annular balance encircled by a white gold ring, a hairspring with flat terminal curve, and a unique triple shock resistance system with flat steel fixing springs and a polished tourbillon-type horizontal bridge.

Standard on both references are curved hour and minute hands, crafted from polished stainless steel. Their shape is one of the typical De Bethune designs, a kind of avant-garde reinterpretation of the classic ‘pomme de Breguet’ style. Usually in this reference, both hands feature counterweights in the form of a fan. However, in the present example, the appearance of the hands is very unusual for this reference – the minute hand is without a counterweight, while the hour hand has a skeleton fan-shaped counterweight. Therefore, we describe the present lot as a ‘Single Fan’. This design is rarely used in the De Bethune collection – similar hands (albeit in blued steel) were a standard option in the time-only DB25 Ref. DB25SVAWS1 and Ref. DB25SVARS1 models produced since 2013.

DB25 Moon Phase Starry Sky Ref. DB25SVMLWS3 watches are extremely rare on the market, even in the standard version, while the present example with nonstandard-designed hands is even rarer, and possibly unique. We have been unable to find information confirming the existence of other watches in the same execution.

The DB25 Moon Phase Starry Sky ‘Unique Hands’ Ref. DB25SVMLWS3 would be an extremely attractive purchase for the collector and De Bethune watchmaking expertise aficionado, with an opportunity to obtain a very rare, probably unique, beautiful decorative mechanical timepiece from this famous independent watch brand, one of the undoubted leaders in the haute horlogerie watch market. The combination of impeccable technical workmanship, manifested in the manufacture of an unusual manual-winding caliber, an exquisite artisanal finishing of the decorative ‘starry sky’ dial, and the branded spherical moonphase indicator, undoubtedly adds to the appeal of this lot.

The keen collector should note that also offered for purchase in this sale is an impressive selection of De Bethune collectible wristwatches, including the extremely rare ‘all blue’ DB28 Kind of Blue ‘Golden Hands’, DB28 Grand Sport ‘Grand Sailor’, the rare and desirable DB26 Perpetual Calendar ‘The Last’, as well as other fine and notable timepieces of the brand.