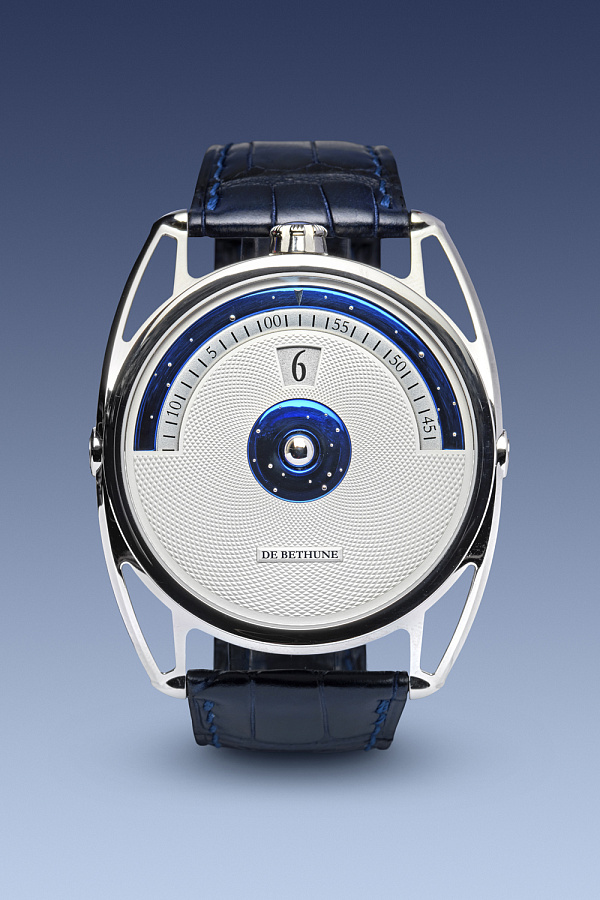 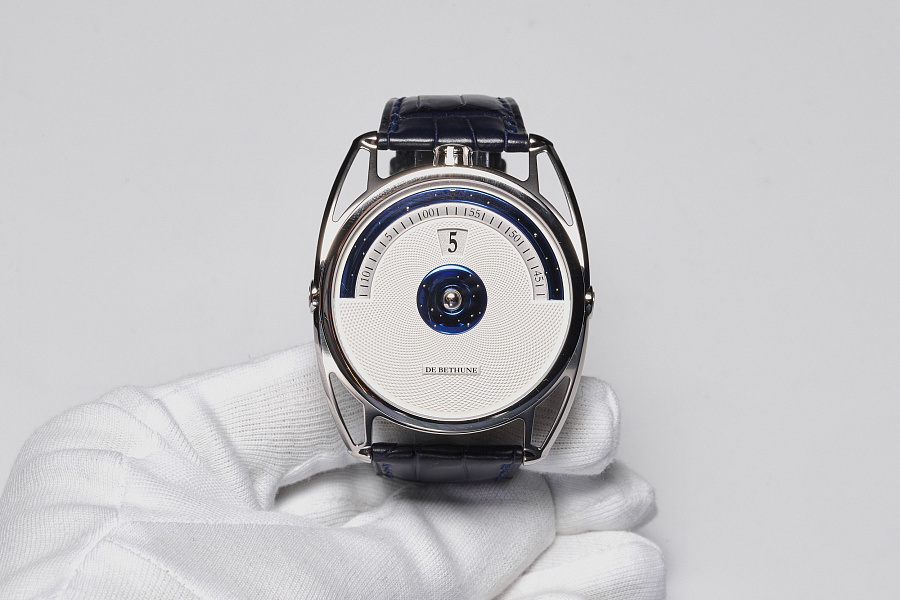 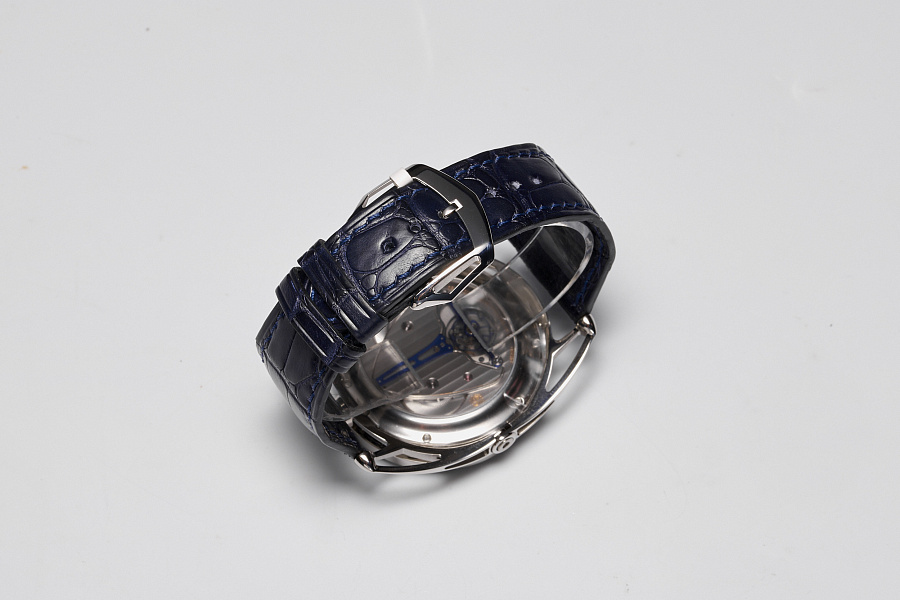 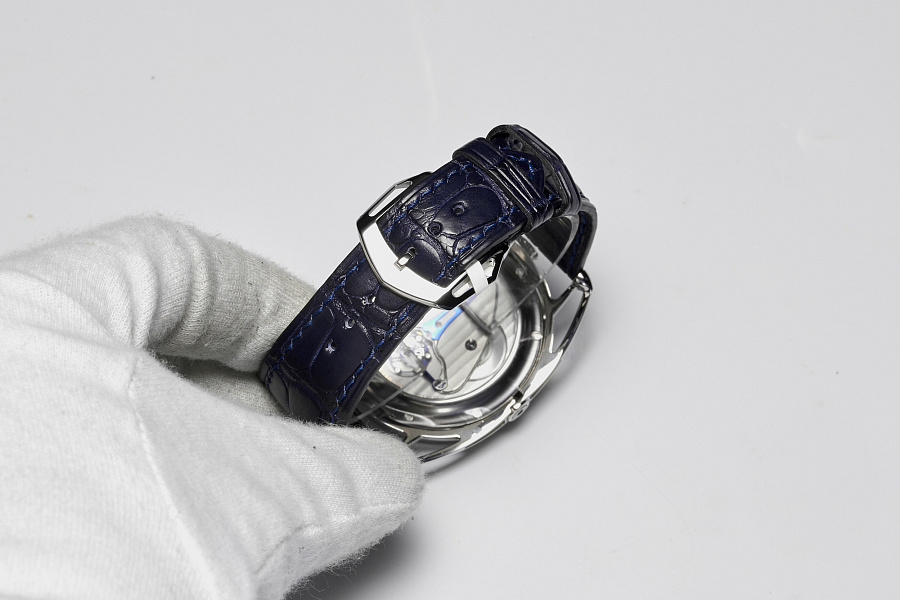 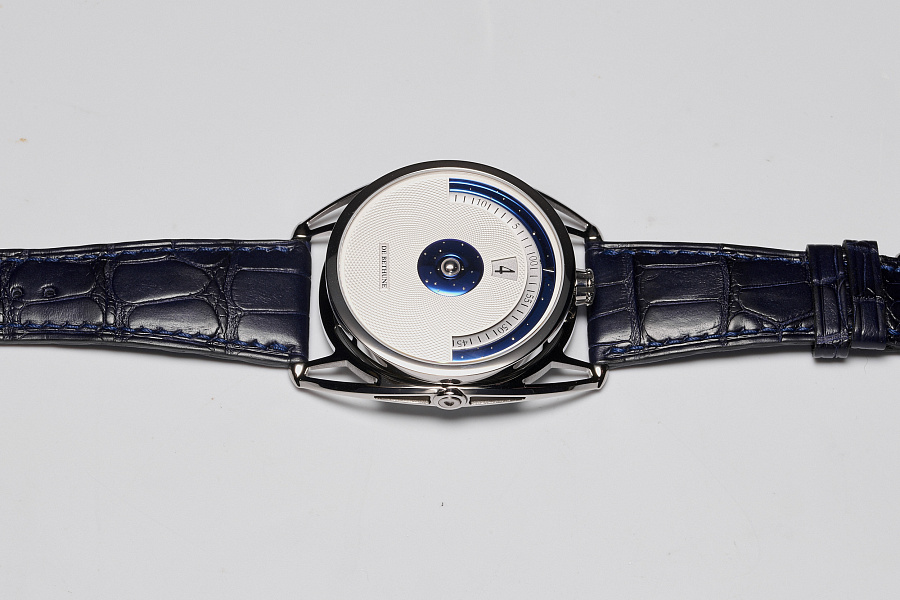 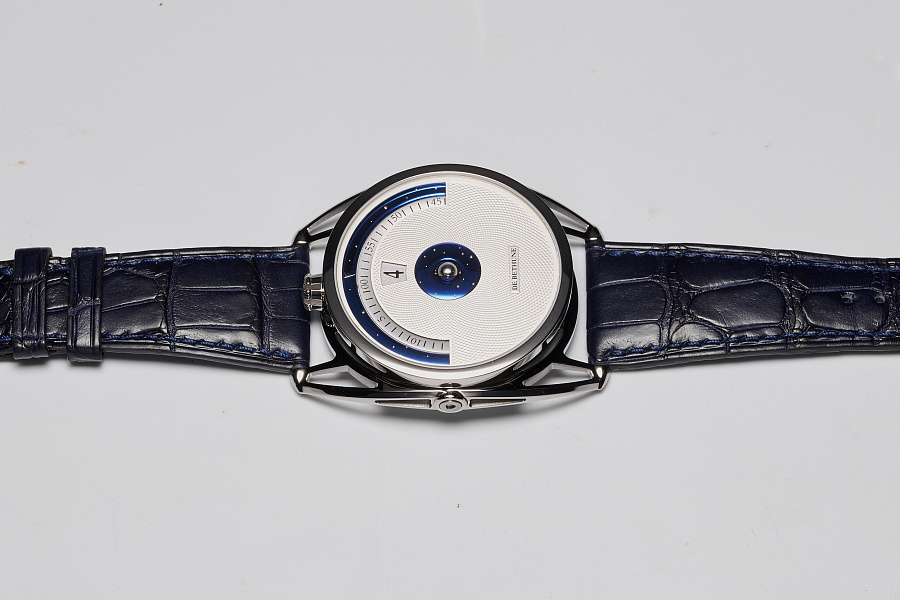 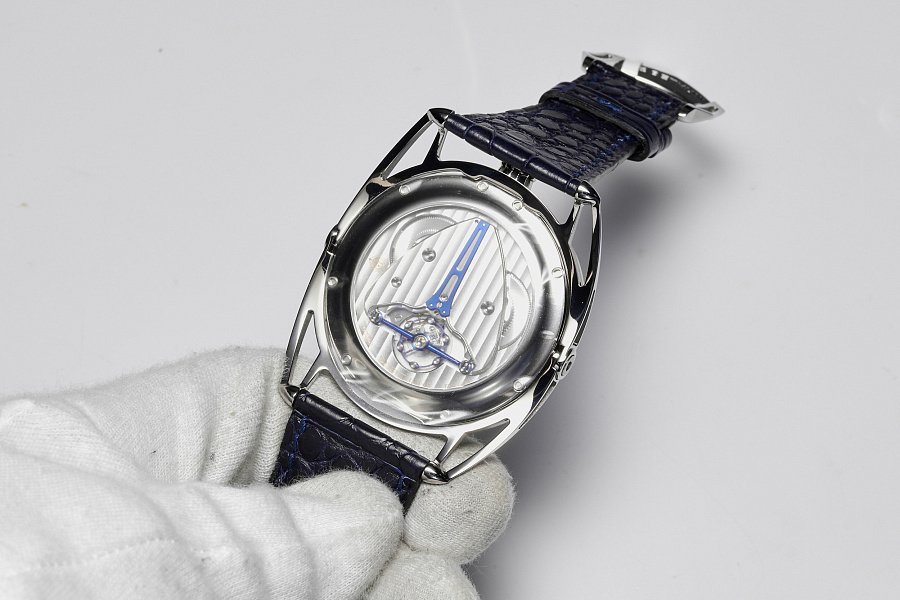 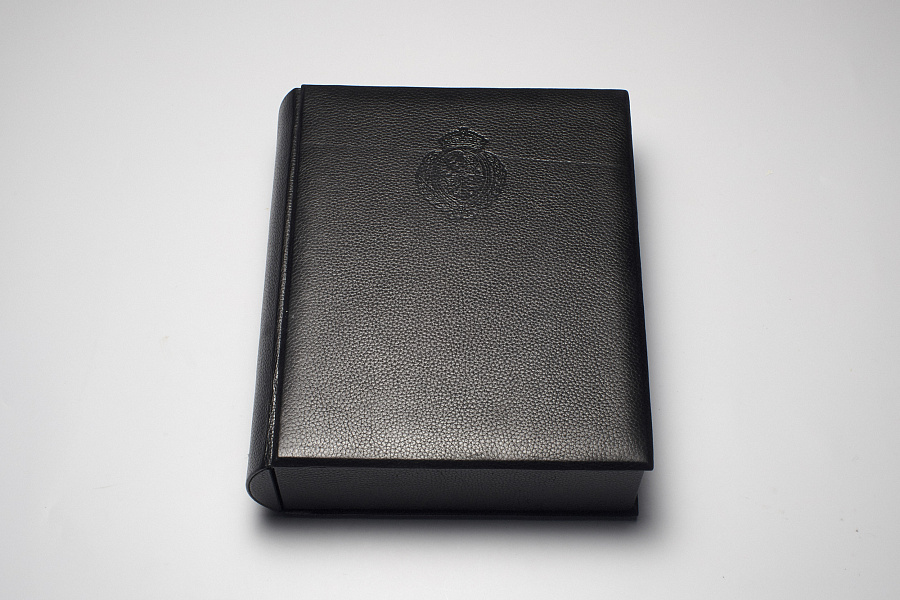 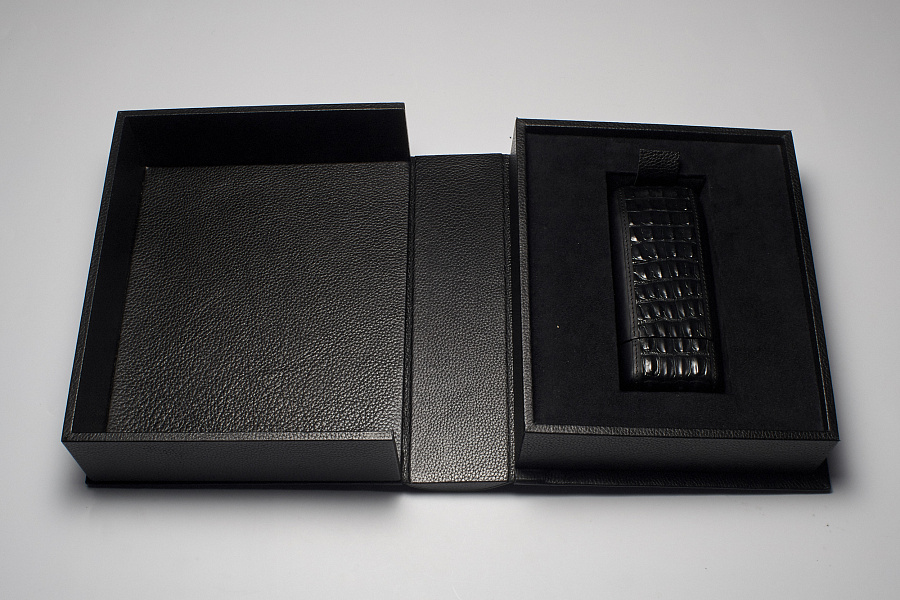 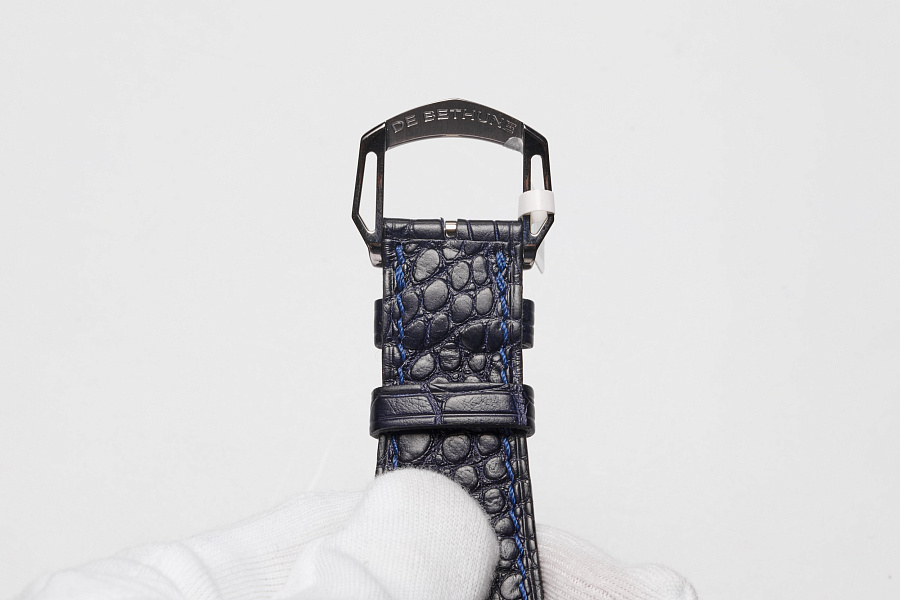 An extremely rare, fine, unusual and attractive wristwatch of the Swiss watch brand De Bethune, founded in 2002 by the Italian vintage watch dealer David Zanetta and French watchmaker Denis Flageollet. Estimated production period: 2016–2021. Case in polished titanium, diameter 45mm, 11.6mm thick, mobile (‘floating’) lugs in titanium with pivoting system, sapphire caseback. Dial adorned with a hand-guilloché barleycorn motif and white gold stars on the peripheral segment from 9 to 3 o’clock and on the central disc to depict a starry sky. Hand-wound caliber DB2144 with double barrel and 5-day power reserve. The back of the movement is engraved with the brand logo, reference, brand name and watch number in numbered edition. Functions – jumping hours at 12 o’clock, minutes on a rotating ring on the upper dial section, spherical moonphase indicator at the centre, accurate to within one day every 122 years. Black De Bethune leather strap with De Bethune pin buckle in polished titanium. Numbered edition. De Bethune reports only 32 pieces made since 2014.

De Bethune’s first attempt in the genre of a watch with digital time indication in apertures was the DB Digitale, launched in 2006 in an exotic DBS case design with a jumping hour, minute indication in a revolving ring, American-style instantaneous triple calendar and signature spherical moonphase display on the back. In 2014, the brand replaced the DB Digitale models with the newly developed DB28 Digitale Ref. DB28DN/S (the present lot), while 2014 also saw the release of the Dream Watch 5 digital time indication concept watch, and in 2015, the brand proposed the limited-edition DLC-blackened stainless steel DB27 Digitale International Polo Watch (10 pieces). As the sales figures kindly published by De Bethune show, all of these digital window watches, including this reference, were produced in extremely small quantities, and therefore each of them is of considerable collector’s interest, undoubtedly including the present example. We found that the DB28 Digitale is almost impossible to purchase on the pre-owned watch market.

De Bethune’s first attempt in the genre of a watch with digital time indication in apertures was the DB Digitale, launched in 2006 in an exotic DBS case design with a jumping hour, minute indication in a revolving ring

As for the present lot, it should be added that, according to our knowledge, its execution differs from the standard version, information about which is available in open sources including the brand’s website. The caliber DB2144 of this watch initially was supplied as standard with a silicon annular balance encircled by a white gold ring, and this is how it is still presented on the brand’s website. The present example features a balance of another design, patented in 2016 and first used by the brand in the DB28 Kind of Blue watch the same year, featuring a titanium balance with white gold weights. We were quite surprised to discover in the present example another unusual feature of the movement – the same as in the DB28 Kind of Blue watch offered in this sale – and that is the barrel wheel on the right side of the caliber being skeletonized, with spokes, while in the original caliber design it is solid. Of course, in the DB28 Kind of Blue watch this movement part is visible from the side of the dial, while in the present example it is visible from the reverse (movement) side. All our attempts to find information about this feature have failed, so we have reason to assume that either this is a unique timepiece or a particular caliber design option, emerging at certain period of the Ref. DB28DN/S production span.

The present De Bethune DB28 Digitale Ref. DB28DN/S, which we may describe as DB28 Digitale Mk2 because of the unique execution features, as opposed to the standard version DB28 Digitale Mk1, would be regarded as an excellent chance to buy a DB28 Digitale watch in a very special and extremely rare, and even probably unique, Mk2 execution version. The combination of impeccable technical workmanship, an important and unusual complicated caliber with a digital time indication complication, exquisite artisanal finishing of the movement, the special and very rare design of the case in titanium with floating lugs and a charismatic hand-guilloché dial featuring fine finishing, undoubtedly adds to the appeal of this lot.