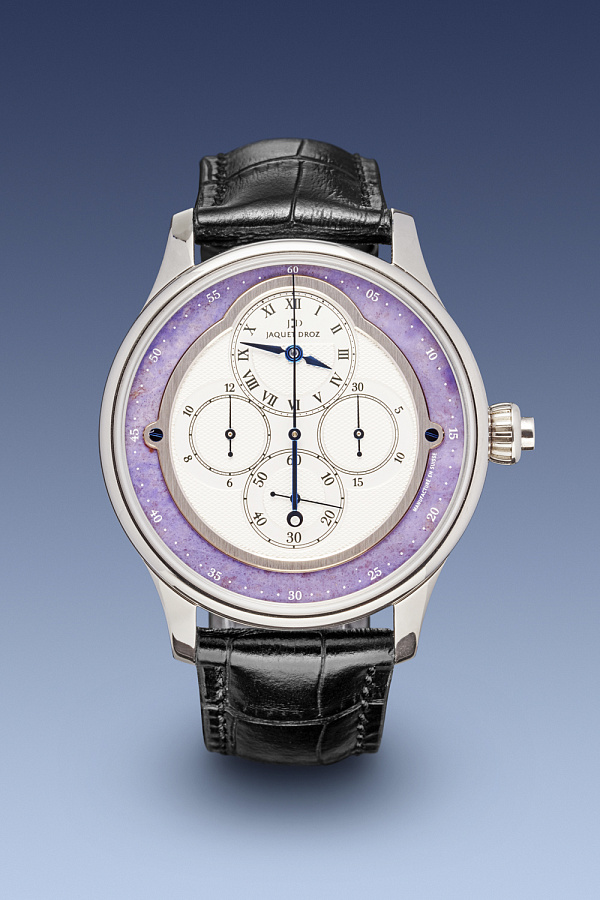 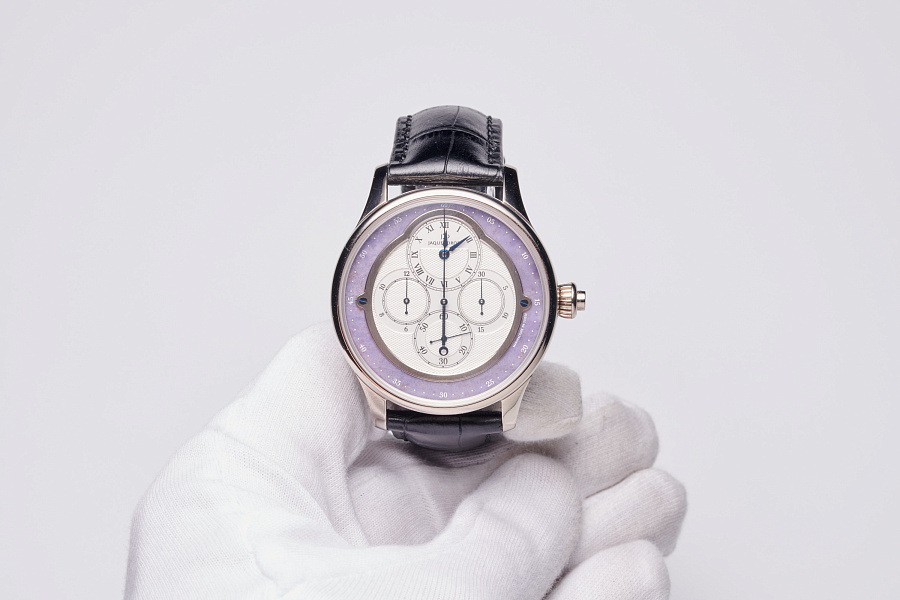 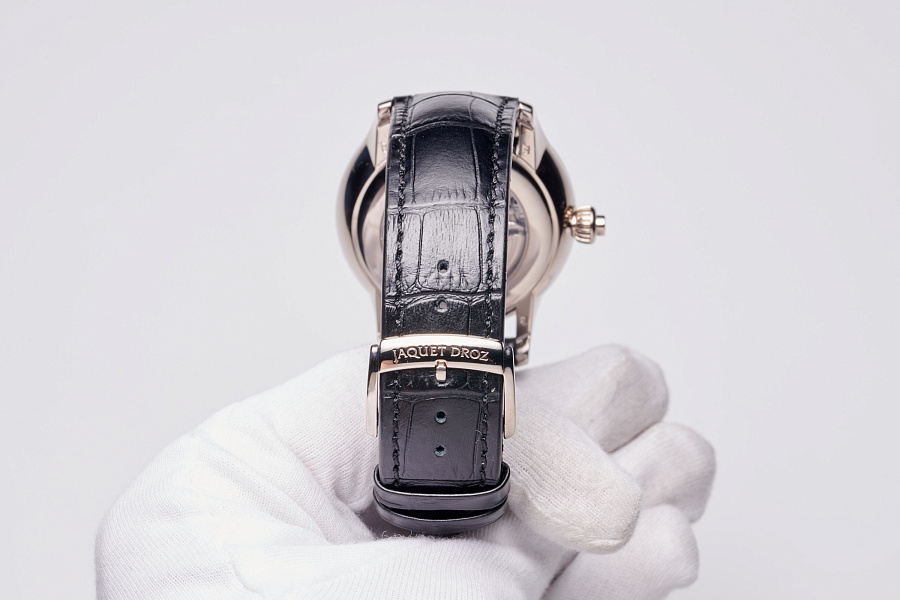 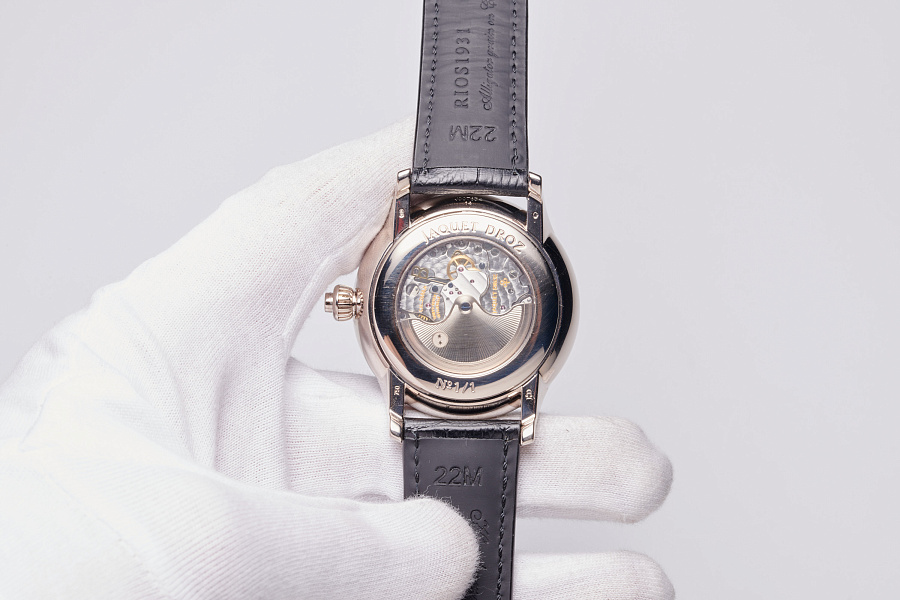 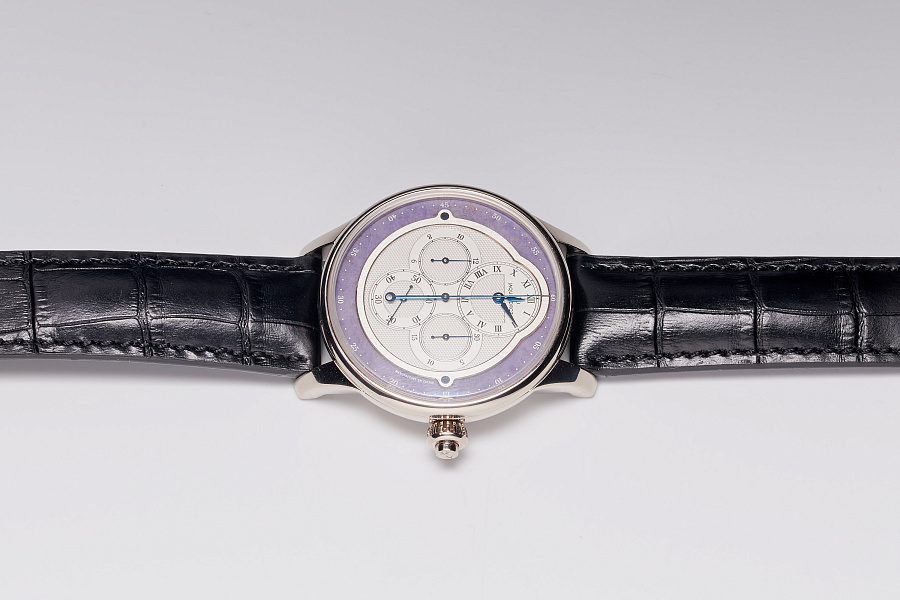 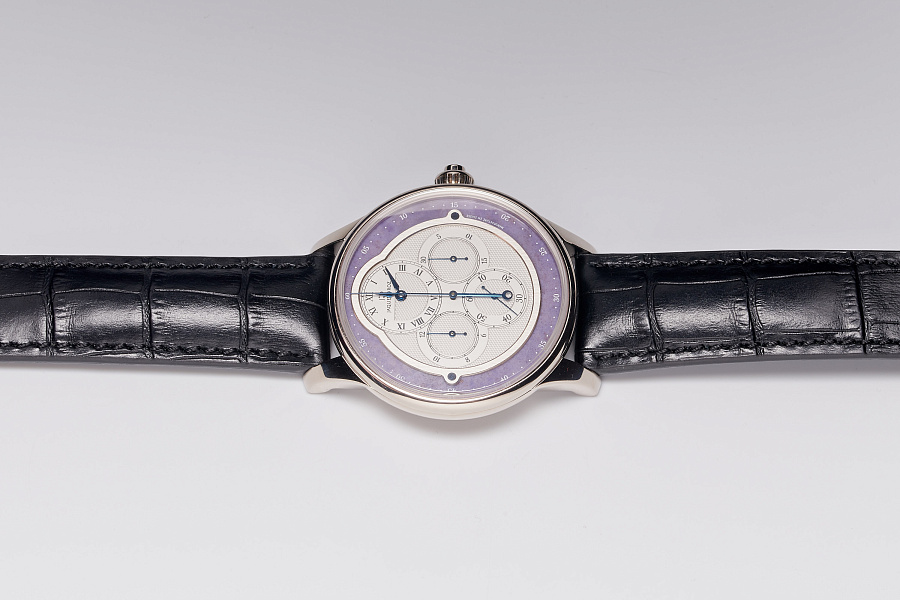 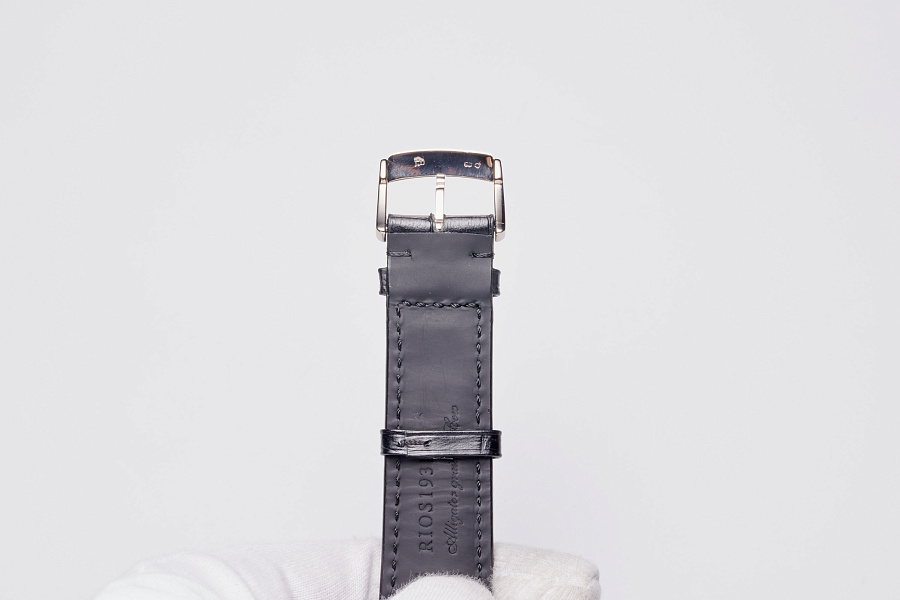 In 2004, the Chrono Monopoussoir Ref. J00763 was the first chronograph in the Jaquet Droz collection, totally relaunched in 2002 as a consequence of the purchase of the brand by the Swatch Group in 2000. The Ref. J00763 dial had an unusual layout inspired by the recently taken Grande Seconde design, which defined the style of the relaunched collection. With the Frédéric Piguet factory of Le Brassus, the production unit of the Blancpain brand, being the exclusive supplier of movements for Jaquet Droz in the Swatch Group stable, it is hardly surprising that Jaquet Droz received a personal modification of the flagship automatic caliber 11.85 – one of the best automatic chronographs on the market.

The present lot belongs to the number of the rarest Ref. J00763 Jaquet Droz chronographs, with just one piece made, and according to our knowledge, it has never previously appeared at auction.

The caliber modified for Jaquet Droz received the designation 2688.M, differing from the basic 11.85 version by the presence of a solid 22k gold rotor with a sunray relief pattern and the signature of the brand, and the sub-dial of hours and minutes shifted upwards. In addition, the date window was omitted. The brand released numerous versions of Ref. J00763, including decorative ones. The dial was decorated with materials including fire enamel, rutilated quartz, obsidian, lavender jade (as the present example), so-called ‘granite vibre’ mined in the canton of Jura, and fossilized coral. Typically, the release of this kind of models was limited to 8 or 88 copies, while only a few were produced as a unique piece – like the present lot. Currently, the production of monopusher chronographs based on caliber 2688.M has been discontinued.

The present lot belongs to the number of the rarest Ref. J00763 Jaquet Droz chronographs, with just one piece made, and according to our knowledge, it has never previously appeared at auction. The unusual branded arrangement of the dial, made of rare lavender jade stone of a fine lilac colour harmoniously complemented by a white gold case and an applied screw-fixed white gold frame, undoubtedly adds to the appeal of this lot. Watches with mineral-stone dials are very rare, and we are not aware of any other chronograph with a lavender jade stone dial. Therefore, the Jaquet Droz Chrono Monopoussoir Jade Lavande Unique Piece Ref. J007634215 would appear to be a unique chance for the collector to purchase an extremely rare chronograph watch of a respectable brand, known for its superb collectible clocks and watches from the 18th century. The attractiveness of the present watch comes from its unique design, excellent and elaborated hand finishing of the case, dial and movement, as well as the rarest combination of a chronograph function and mineral stone dial.

Jaquet Droz is one of the oldest and most respected watch brands in the world, founded by the Swiss watchmaker Pierre Jaquet Droz in 1738. The brand’s activity was interrupted in 1810. There have been several attempts to revive it since then, the latest, and so far, successful, attempt being the restart of the brand in 1989. This was undertaken by the Bahrain investment company Investcorp, which at that time also owned Breguet, Chaumet, Ebel and Nouvelle Lémania. In 2000, the Jaquet Droz brand was acquired by the Swatch Group, which remains the owner to this day. From 2001 to 2009 the brand was managed by Manuel Emch. He initiated a complete relaunch of the collection, which took place in 2002 and was based on the charismatic design of the Grande Seconde, which has its origins in a pocket watch of 1784 with a distinctive dial design featuring an oversized small seconds hand, created by Pierre Jaquet Droz himself. The watches produced during the period of Manuel Emch’s management – from 2002 to 2009 – are, in our opinion, the most interesting in terms of collecting. It was during this period that reference J00763 was launched, although the present lot was produced a couple of years later.