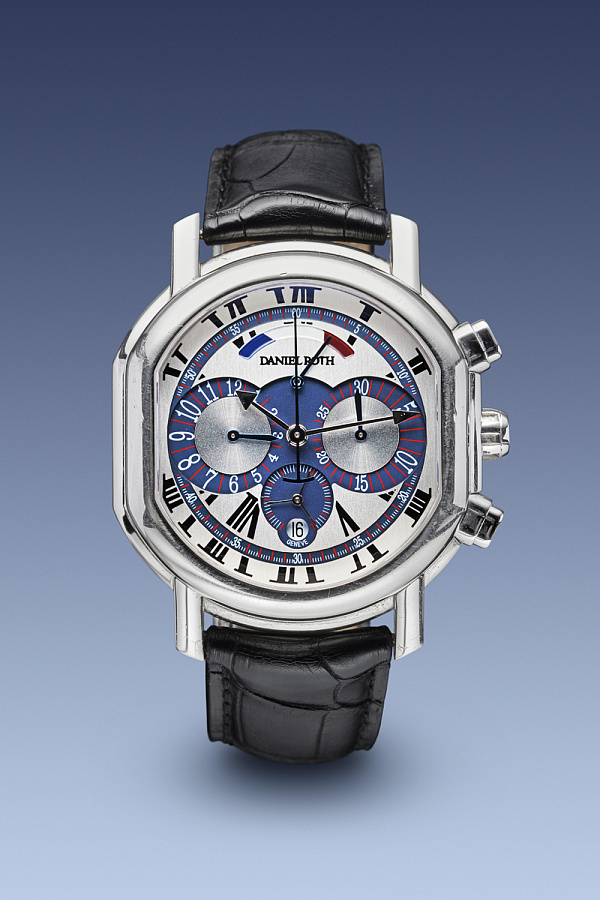 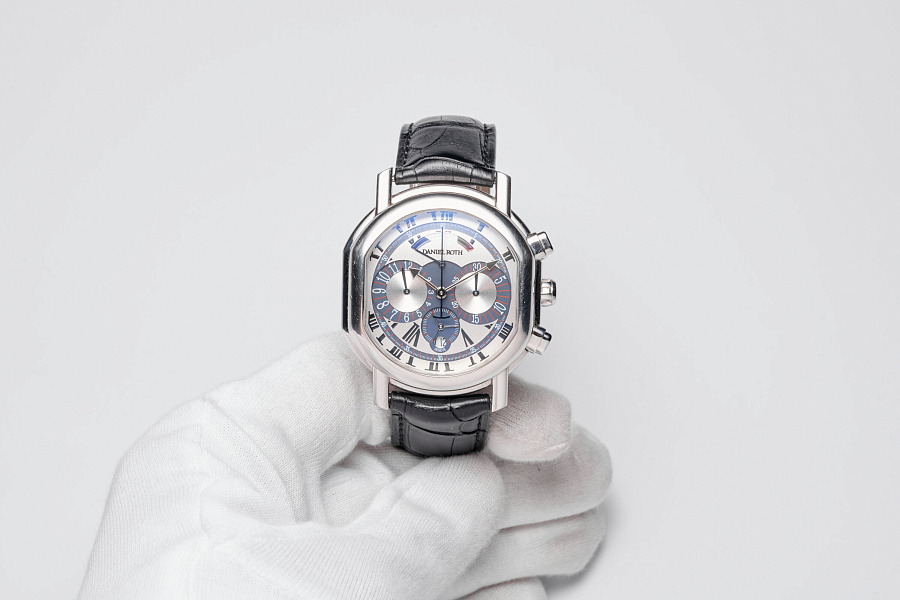 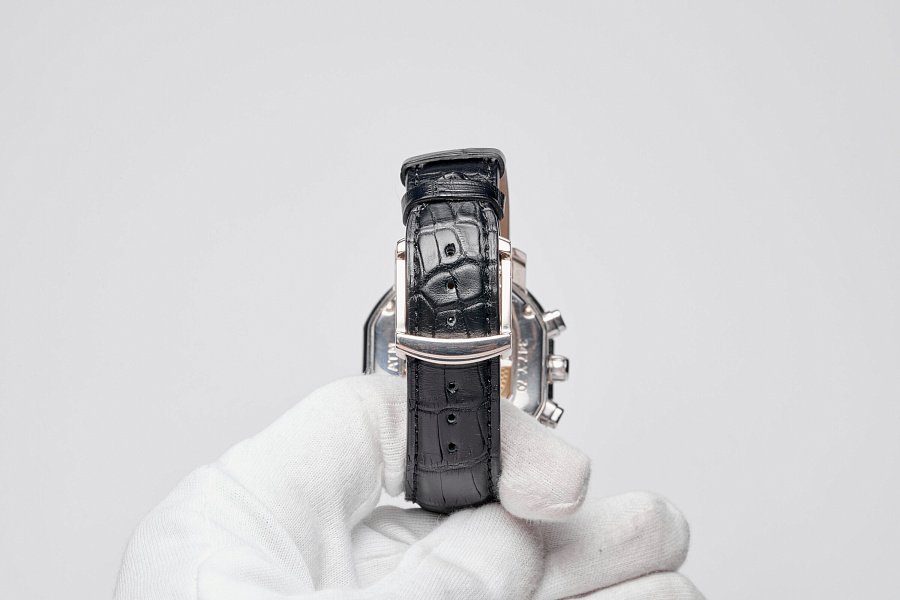 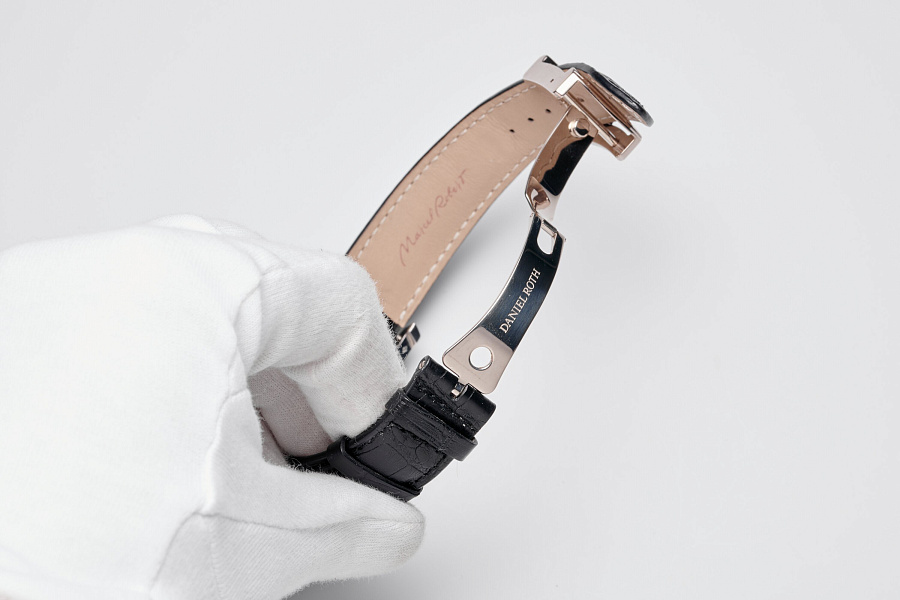 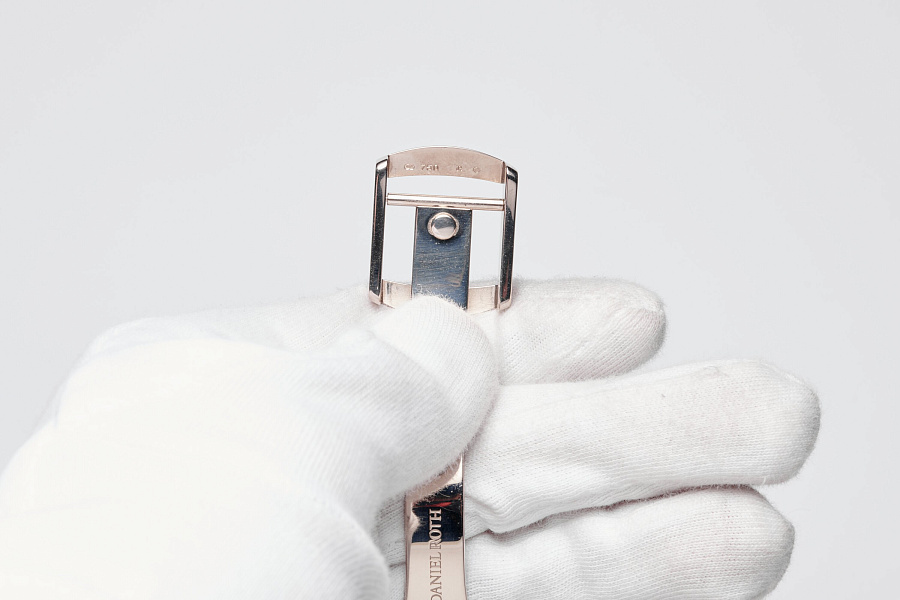 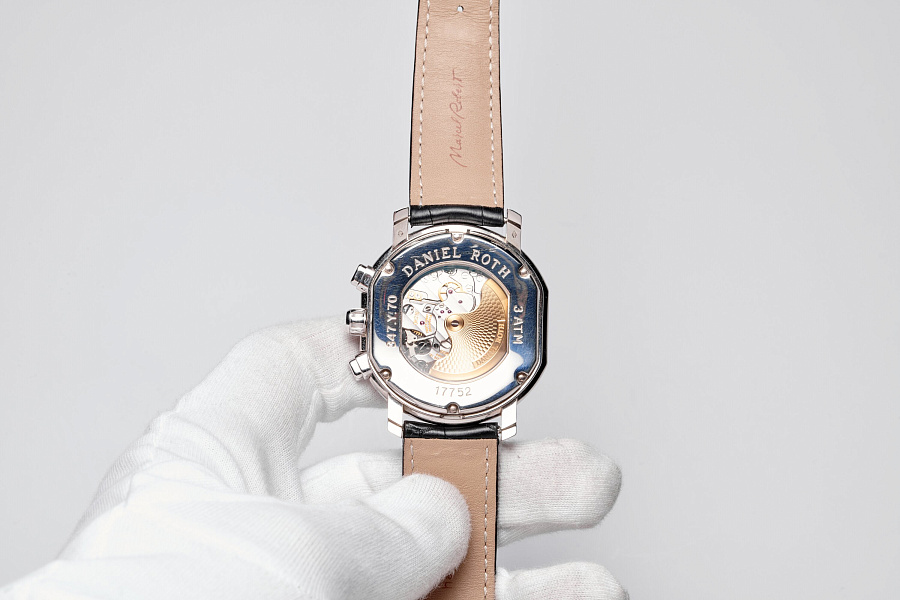 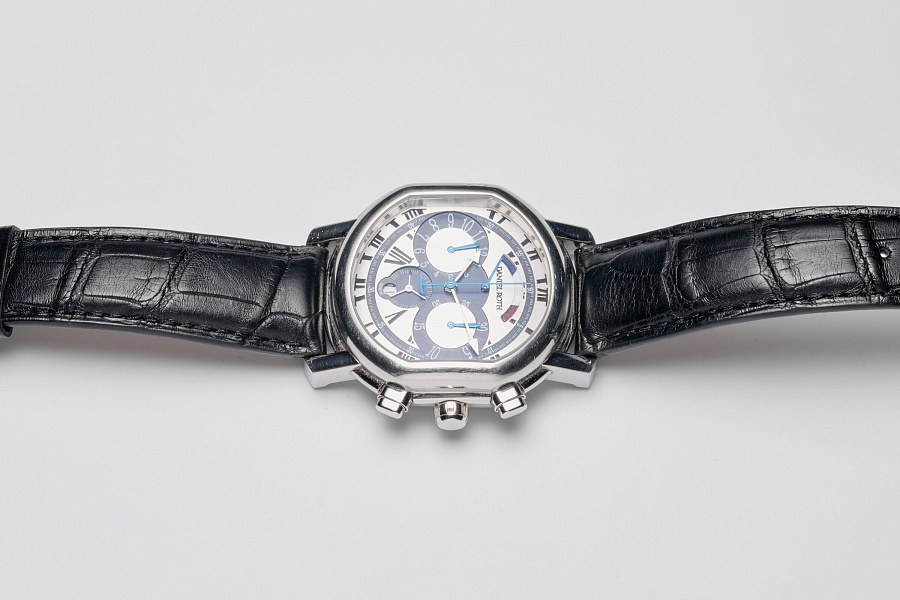 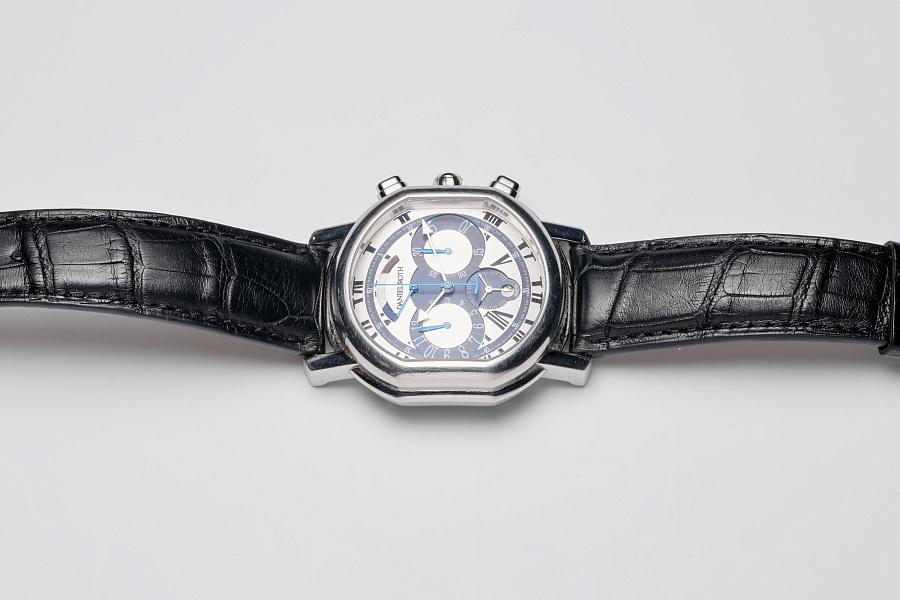 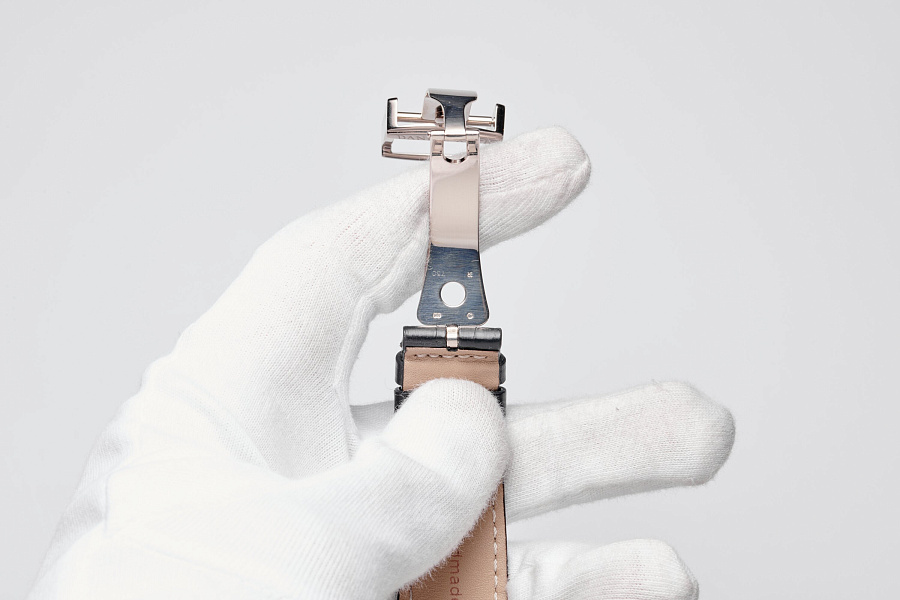 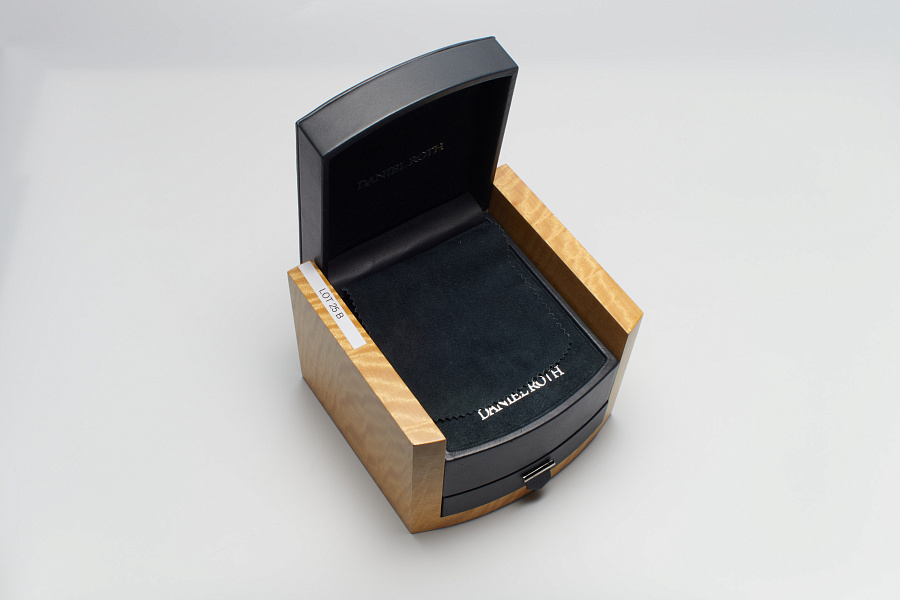 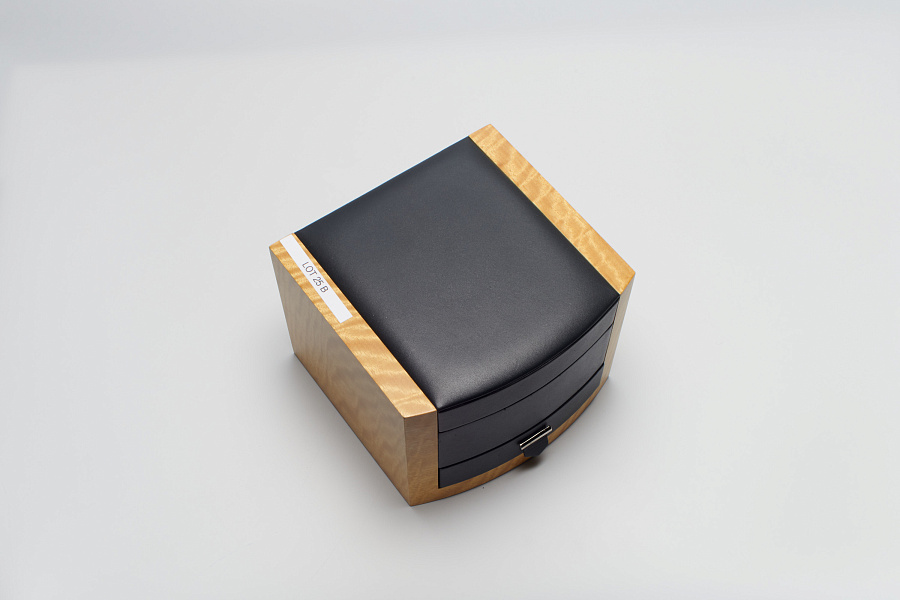 Throughout its timeline, the Daniel Roth brand used many high-end chronograph calibers in their collection, including hand-wound or automatic movements of both vintage and modern production from Nouvelle Lémania, Zenith, Girard-Perregaux, Frédéric Piguet, as well as in-house movements.

Based on a Frédéric Piguet 1185, the DR210 caliber of the present lot features an unusual torque indicator which doesn’t display the remaining power reserve, but serves as an indicator of the optimal/non-optimal torque. This type of display is most well-known due to its use in some Richard Mille and Audemars Piguet complications calibers, developed by the Renaud et Papi movements factory. While the indicator’s hand resides at the centre portion of the torque indicator, it is at optimal torque. The red portion means that the mainspring is unwound to a point that the amplitude of the balance isn’t optimal. The red portion means that the mainspring is close to being fully wound, so torque is again suboptimal. The DR210 caliber, equipped with such an indicator, is a rare example of a modified Frédéric Piguet 1185 movement-blank, which increases the collector’s value of this lot, and also means that this watch has a useful practical function that informs the wearer about the movement’s winding state. Finished to a high standard, the caliber reveals appealing and finely elaborated haute horlogerie traditional finishings and rhodium plating, creating a beautiful contrast to the rose-gold-toned gilded engraved inscriptions and solid gold rotor featuring a fine guilloche pattern.

The present lot, featuring the DR210 caliber developed on the base of a Frédéric Piguet 1185 movement-blank, is one of the rarest Daniel Roth chronographs, keeping in mind that modification with a torque indicator is a rarity itself.

The Academie Ellipsocurvex Chronomax collection was launched circa 2005 in platinum (as the present example), in white gold with ‘sandwich’ dial, and with a flat guilloché dial (Ref. 347.Y.60), the same in rose gold (Ref. 347.Y.40), and two additional diamond-set versions in both types of gold and with ‘sandwich’ dials. The present example belongs to the earliest period of production of this reference, as evidenced by the early number marking the movement – 000015. Platinum Academie Ellipsocurvex Chronomax models are found on the secondary market much less often than those in gold, which only increases the attractiveness of this lot as a collectible.

According to our knowledge the present lot, featuring the DR210 caliber developed on the base of a Frédéric Piguet 1185 movement-blank, is one of the rarest Daniel Roth chronographs, keeping in mind that modification with a torque indicator is a rarity itself. Therefore, the Daniel Roth Academie Ellipsocurvex Chronomax Ref. 347.Y.70.763.CM.BD would appear to be an extremely attractive purchase for the collector due to its rare design, caliber features, and platinum execution. It is easily recognizable and instantly memorable, and represents one of the most spectacular pages in the chronology of excellent wrist chronographs by this remarkable watchmaker and the brand he founded.