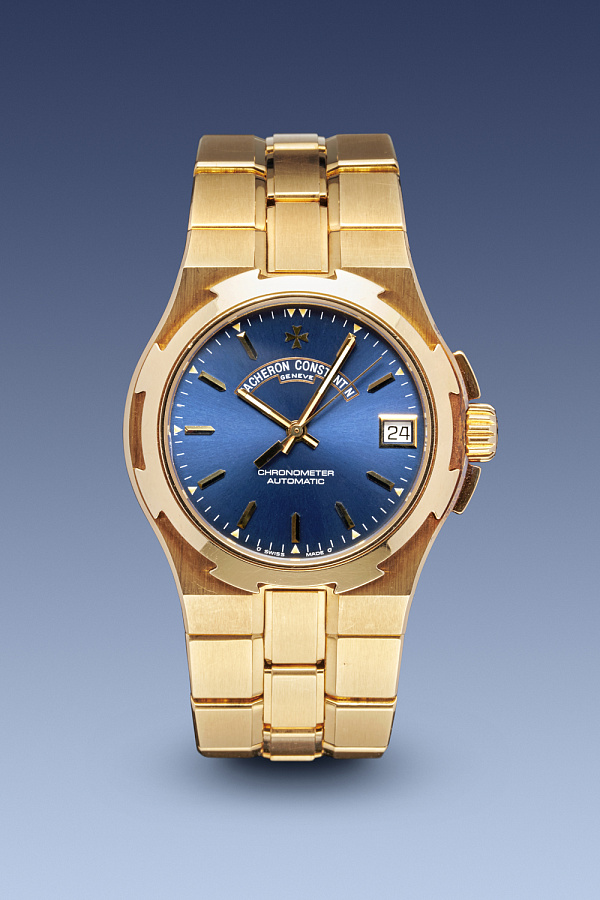 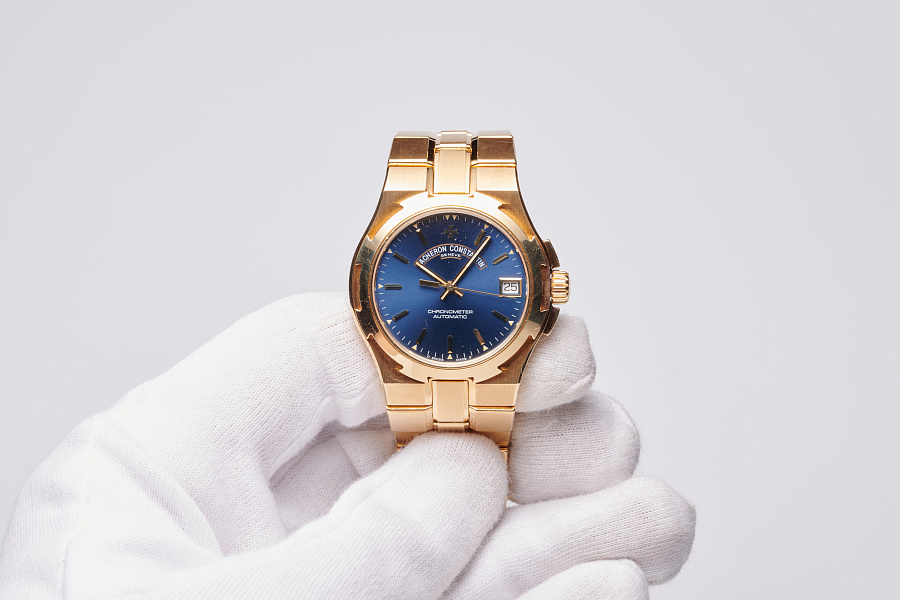 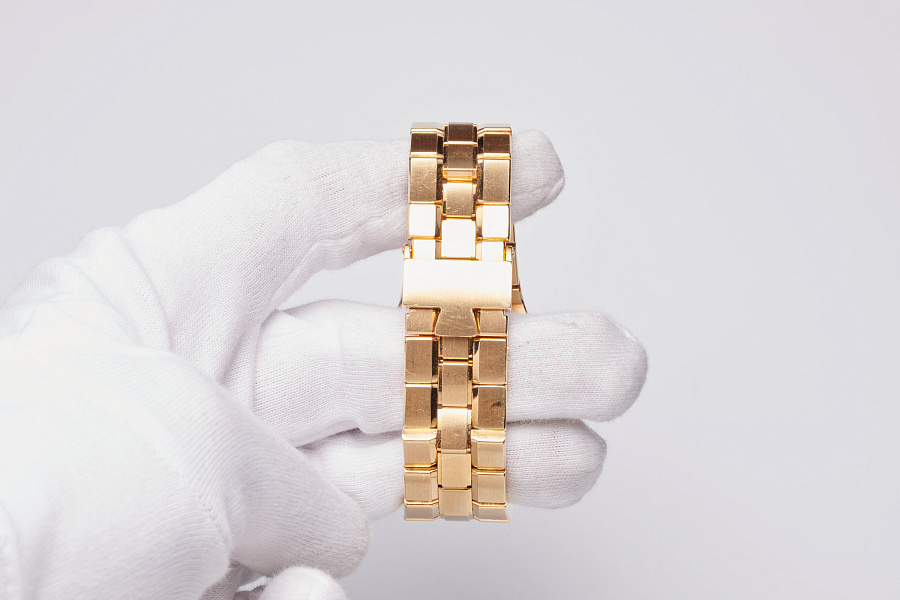 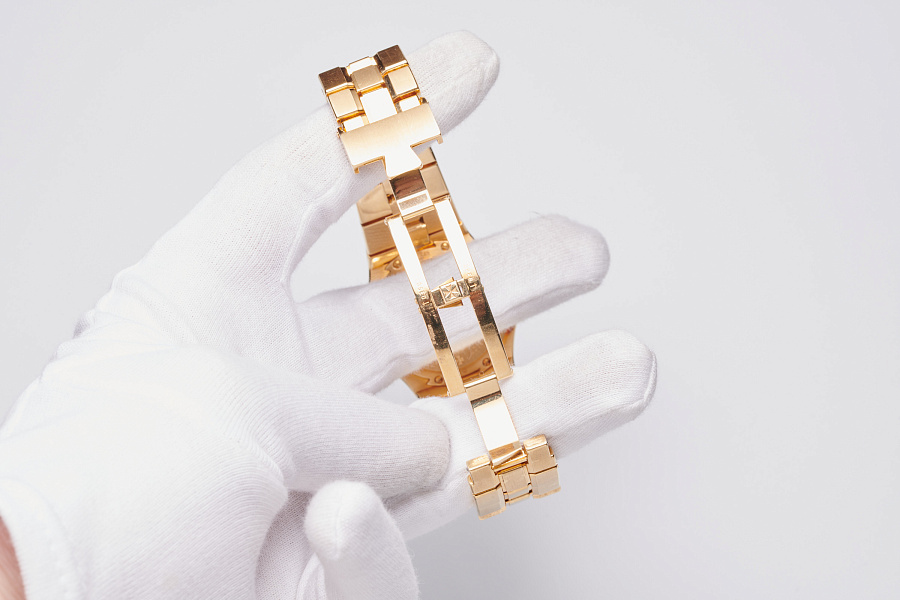 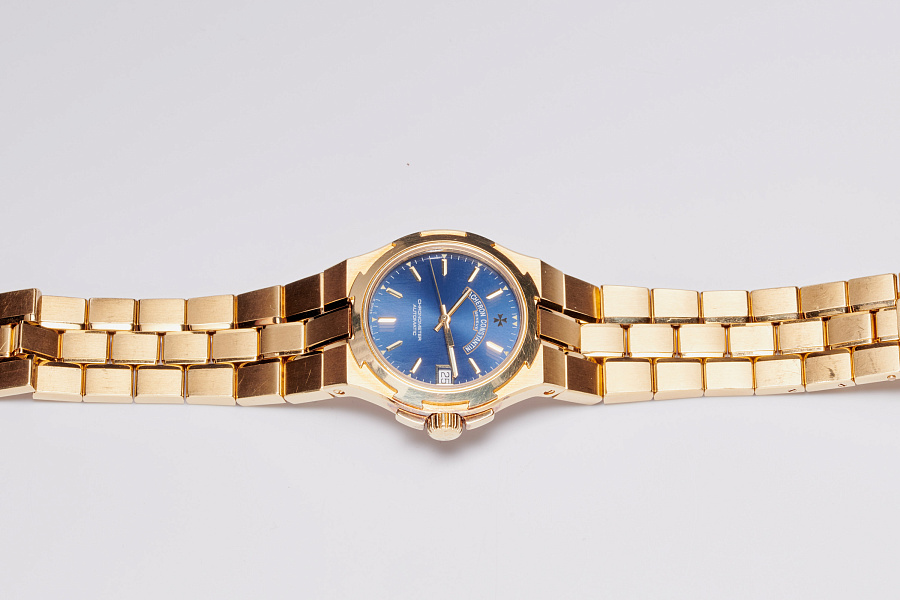 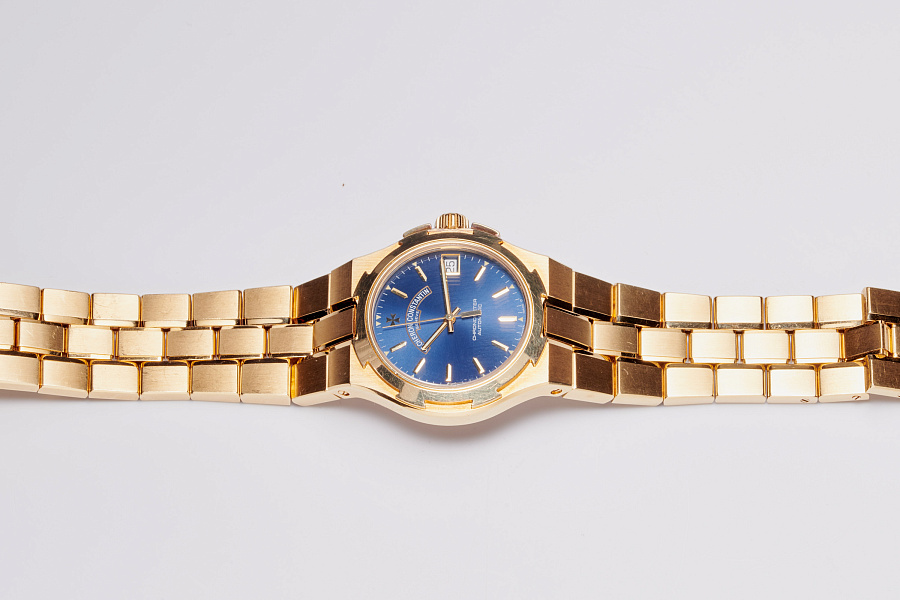 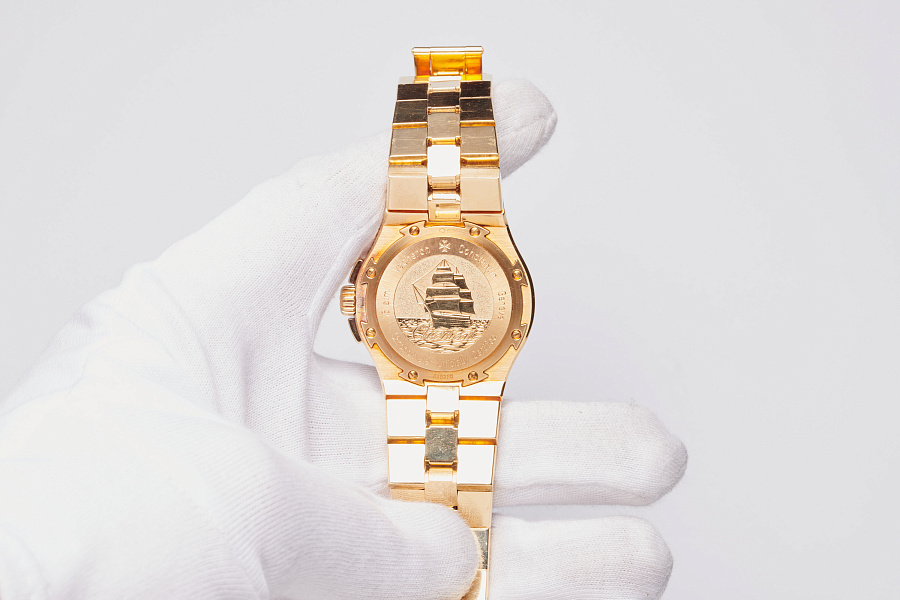 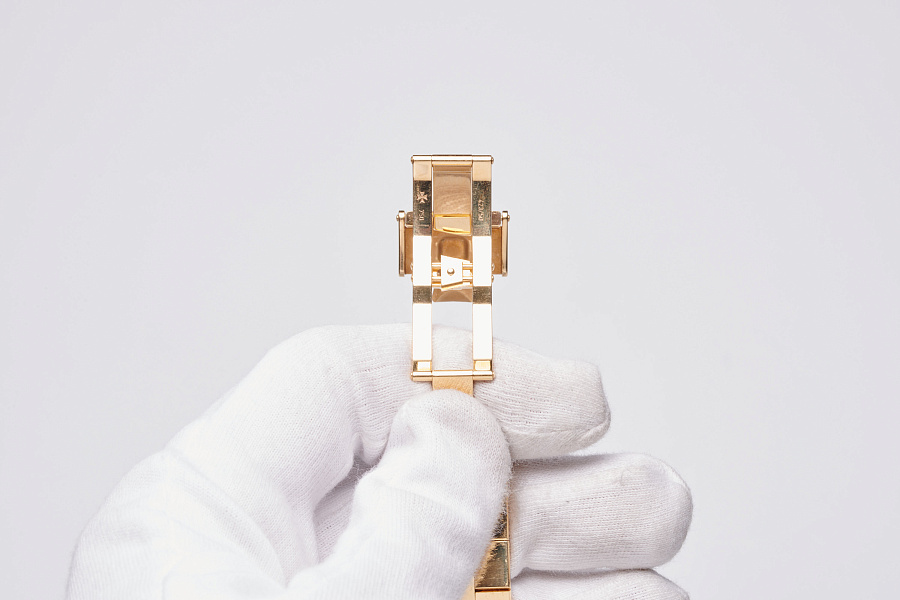 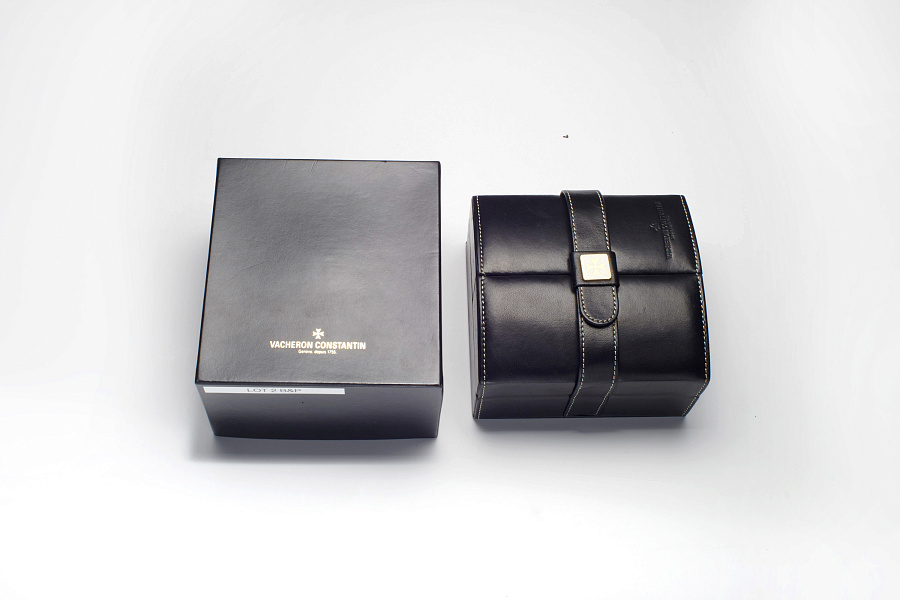 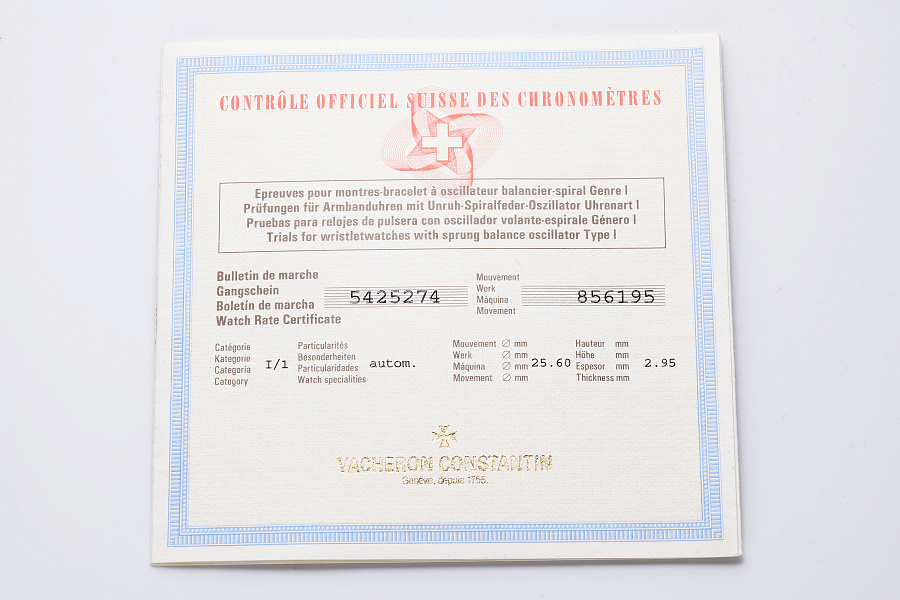 The Overseas collection of luxury sport watches was introduced by Vacheron Constantin in 1996 as a successor to the previous sporty and elegant Phidias collection, and on a bracelet of an integral design. Since 1996, the Overseas collection has proven its appeal both as a high-end everyday watch and as a collector’s item. Although there is no data on the number of pieces released, which is typical for Vacheron Constantin, there is a fairly detailed timeline of released models and their varieties, compiled by watchbrotherslondon.com. Also, in general terms, there is an understanding of which self-winding Overseas executions are rare and therefore especially attractive.

The collection’s early automatic Ref. 42050 models were predominantly offered in stainless steel, while the yellow gold models were much rarer, in no small part due to their high cost. The present example, the 35mm yellow gold Ref. 42050 with a blue sunburst dial, equipped with the self-winding caliber 1310, belongs to the earliest first-generation Overseas I collection production span. It can be argued that the self-winding Overseas watches of the early period are the most interesting to collect. Caliber 1310, based on the ultra-flat movement-blank 3100 supplied by Girard-Perregaux, and COSC-certified, was used only in the initial period. Furthermore, caliber 1311, the movement of the second-generation Overseas I, was developed in order to make it more rigid – the thickness of the mainplate being increased by 0.3mm. The change in caliber denoted the reference – upgraded models are referred to as Ref. 42052. Externally, the watch did not change. Yellow gold Ref. 42050 models with white dials appear to be the most common, followed by rarer blue dials, as the present example, and even more rare black dials.

The present example, the 35mm yellow gold Ref. 42050 with a blue sunburst dial, equipped with the self-winding caliber 1310, belongs to the earliest first-generation Overseas I collection production span.

Another important feature of the present example, typical for the first-generation models, is the ‘sigma’ dial, which signifies that the hour markers and hands are made of solid gold. ‘Sigma’ dials occasionally appear in Ref. 42052, albeit rarely. The present example also uses the plain spelling of ‘Geneve’ without the grave accent that appears in some first-generation examples.

The luxury solid gold bracelet of the present lot is fitted with a slide-lock triple folding clasp and an interesting second locking mechanism via the half Maltese cross flip-lock security device. This execution also corresponds to the first generation of Overseas I, and undoubtedly adds to the attractiveness of the present lot.

The Overseas is a superb luxury sports watch created by Vacheron Constantin as an alternative to similar watches from other prestigious brands. Vacheron Constantin goes up against them with a unique design of its own, with the collection’s signature features. The present lot belongs to the earliest release period of the Overseas collection and is therefore the most interesting as a collector’s item. The characteristic features of this lot are authentic, and fully correspond to the early period. Therefore, the Overseas I Chronometer Automatic ‘Early’ Ref. 42050/423J would appear to be a very attractive purchase for the collector who seeks a self-winding mechanical wristwatch of a branded sporty design from a world-famous traditional watch brand, one of the market leaders in haute horlogerie and complicated timepieces. The present watch features a Vacheron Constantin 18k yellow gold bracelet fitted with half Maltese cross-shaped triple folding clasp that significantly increases the perceived value of the present watch and underscores its sporty chic character.