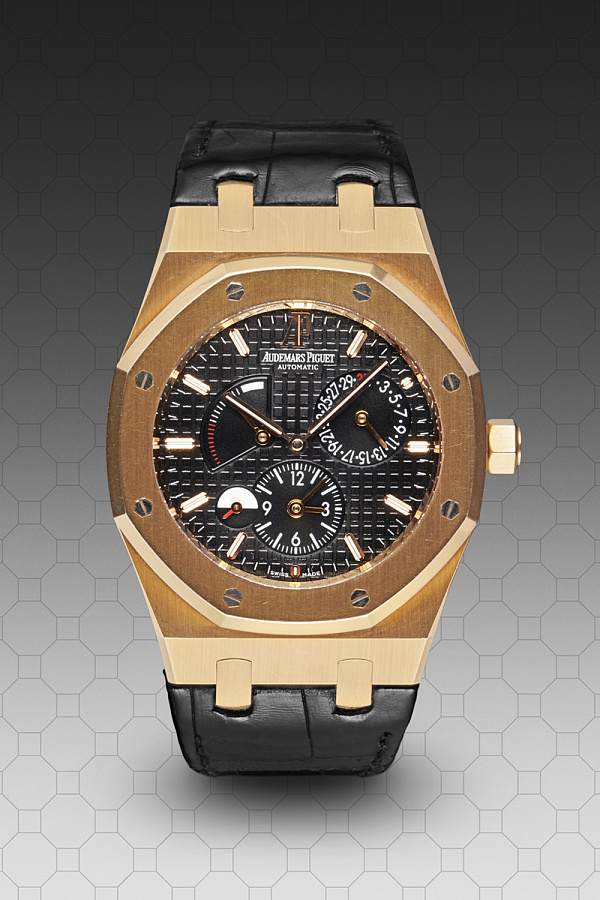 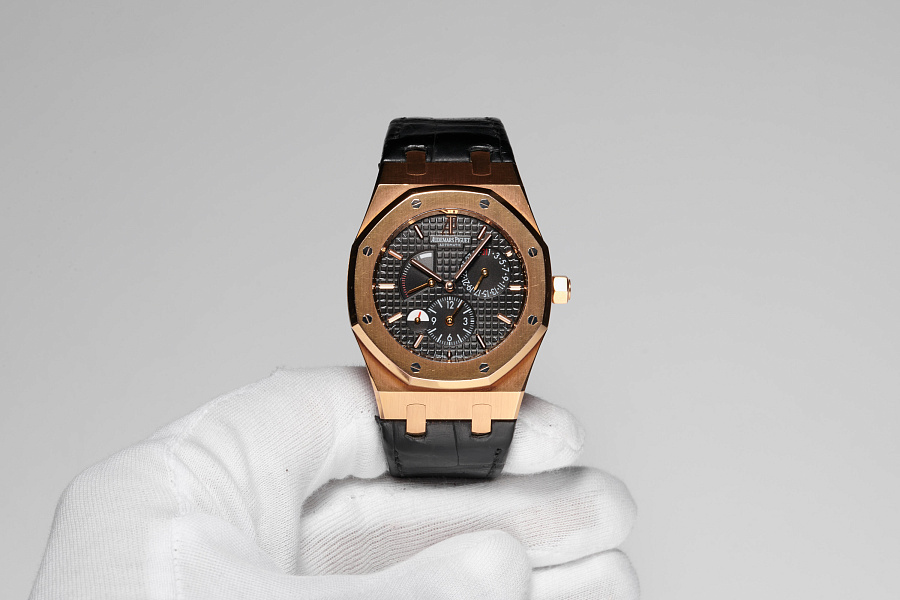 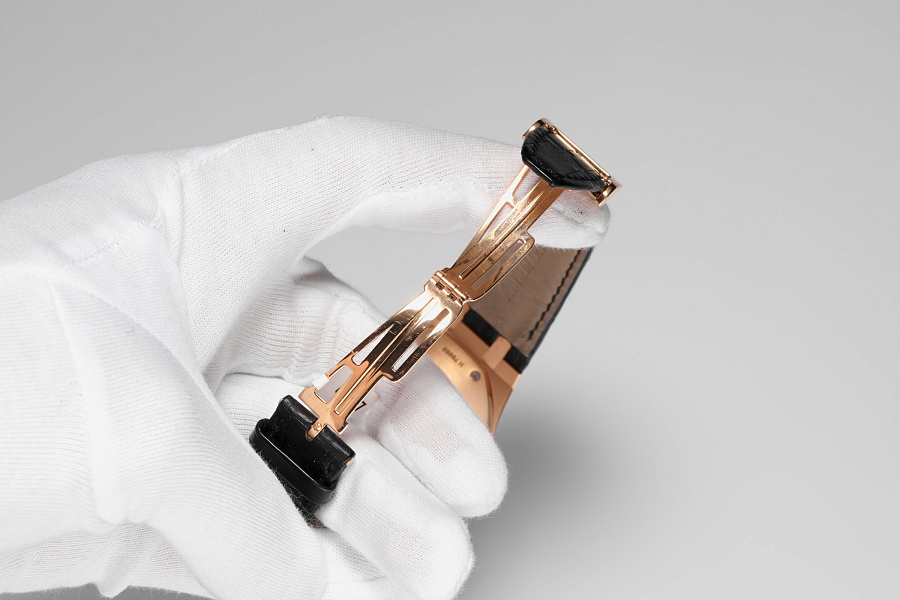 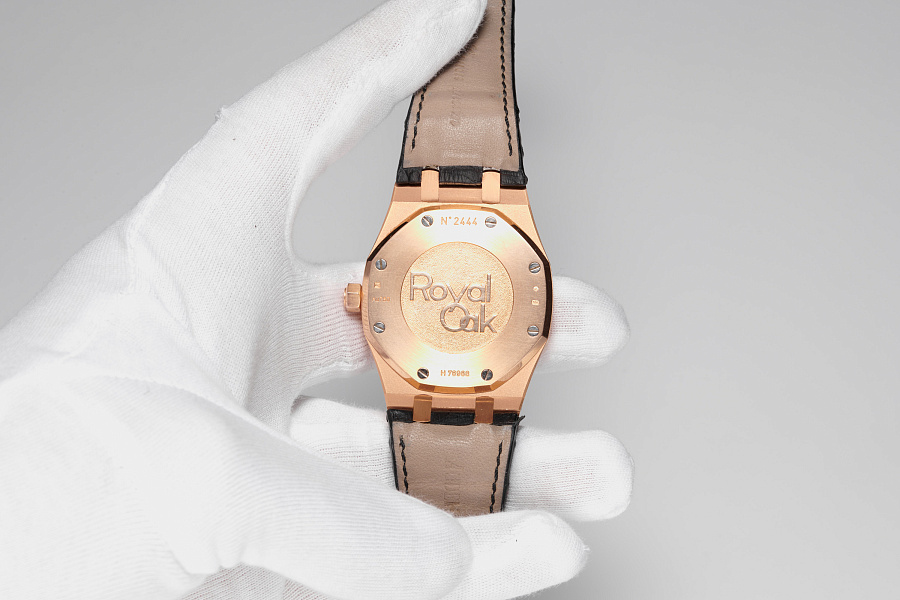 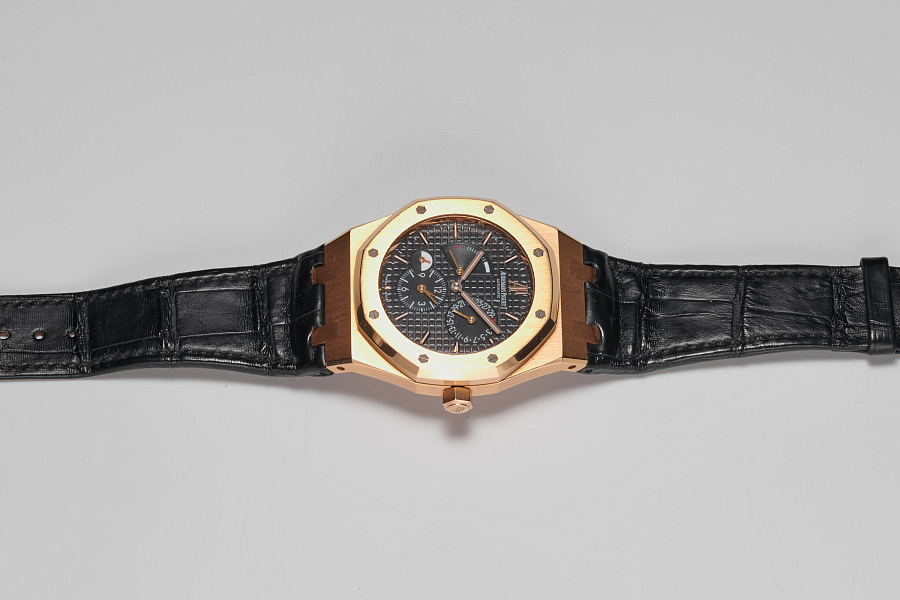 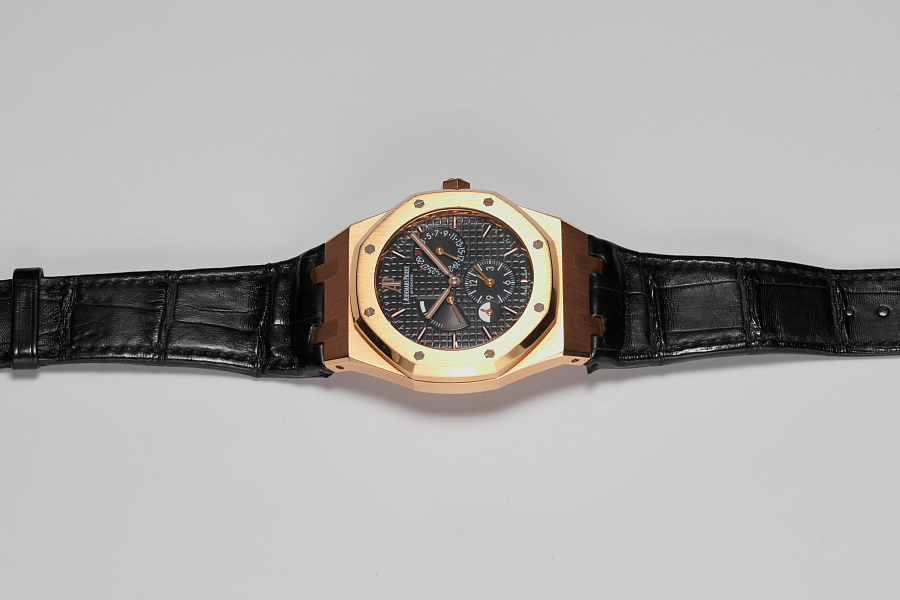 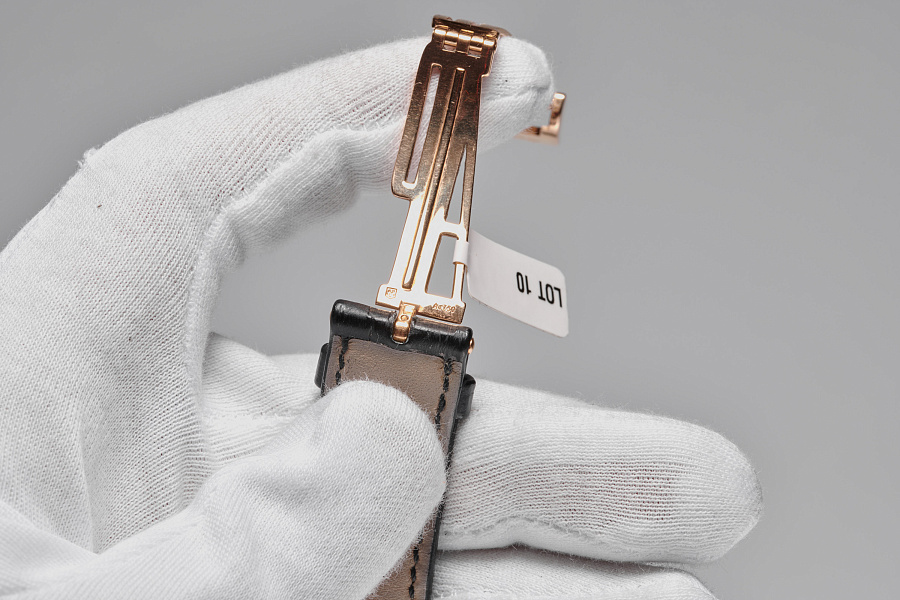 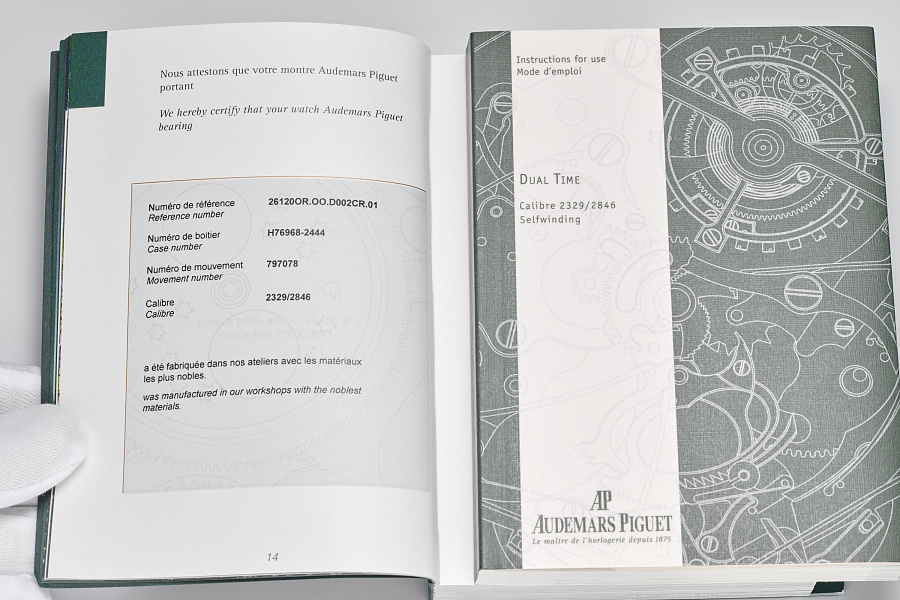 Reference 26120 is the Royal Oak Dual Time produced from approximately 2007 to 2015 as an update of the previous Dual Time Ref. 25730 models – the first Royal Oaks with a GMT function. The case of Ref. 26120 was enlarged to 39mm (Ref. 25730 featured a 36mm case) – to the standard Royal Oak “Jumbo” size. The watch received a modified Royal Oak bracelet and a newly-designed triple folding clasp with two buttons on the sides or a leather strap with classic Audemars Piguet “AP” double folding clasp, as in the present example. The updated dial features an enlarged “Grande Tapisserie” relief pattern, and four sunken subdials for the date, power reserve, second time zone (GMT) and its day/night indicator. The logo with the inscription “Automatic” below it is placed on a raised flat plate just below the “AP” applique at 12 o’clock. The gold baguette appliques and hour and minute hands are wider and longer compared to the previous Ref. 25730, both of a new Royal Oak design, and with luminous coating – following a change in the style of Royal Oak dials in 2005. Ref. 26120 uses the caliber 2329/2846, an updated version of the previous caliber 2229/2845, featuring an additional day/night subdial for the GMT function. Both calibers had been developed by the brand in collaboration with Jaeger-LeCoultre, long-term partner and supplier of Audemars Piguet. The Ref. 26120 caseback was updated as well, with a medallion and embossed “Royal Oak” inscription instead of the flat caseback of Ref. 25730 with “Royal Oak” engraving.

A beautiful and remarkable rose gold and black appearance, featuring an updated version of the self-winding caliber with full GMT function makes the present lot a perfect daily wearer.

Reference 26120 was the first and at present the last substantial modification of a Royal Oak Dual Time watch, created by Audemars Piguet in 1990. During its production span, Ref. 26120 was available in different variations and was mostly produced in stainless steel on a bracelet, as well as in pink gold on a leather strap, as in the present lot. White gold and yellow gold models on a leather strap are extremely rare. Several dial colour options were also offered – matt silvered, dark blue as in the original Royal Oak “Jumbo”, and black, as in the present lot. According to our knowledge, there was one dial design variation during this period, with a smaller continuous power reserve subdial scale (when compared to the common design with equal dashed red, dashed white and continuous sections). This dial design variation appeared during the final period of the reference 26120 production span. Therefore, we describe it as “The Late”.

The Royal Oak Dual Time ‘The Late’ Ref. 26120OR.OO.D002CR.01 is an excellent purchase for the collector who desires an attractive, extremely rare and complicated mechanical wristwatch from a world-renowned traditional watch brand, one of the undisputed leaders in the haute horlogerie watch market. A beautiful and remarkable rose gold and black appearance, featuring an updated version of the self-winding caliber with full GMT function – meaning hours, minutes and day/night of a second time zone – makes the present lot a perfect daily wearer. For a discerning collector it may be regarded as a must-have due to the advantage of owning such a rare dial design variation.