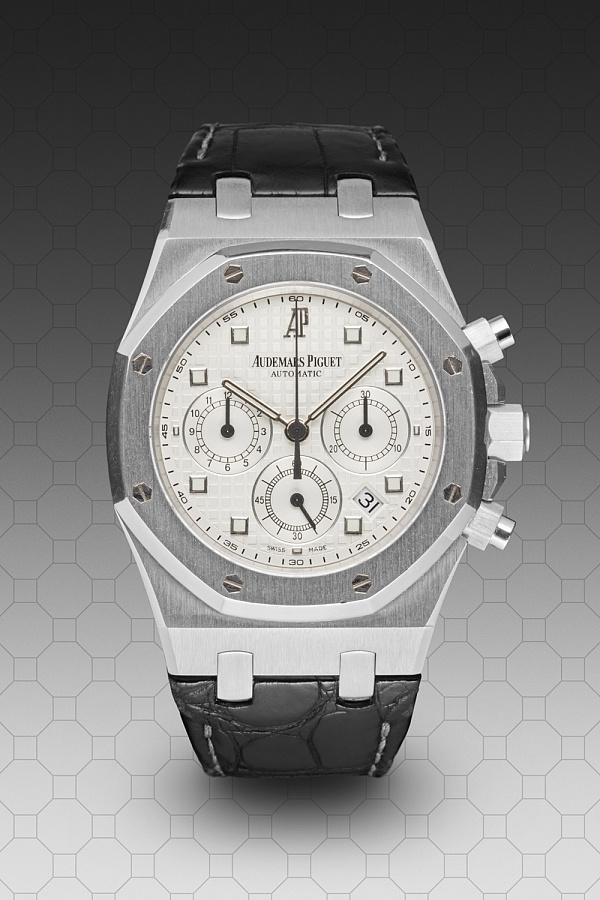 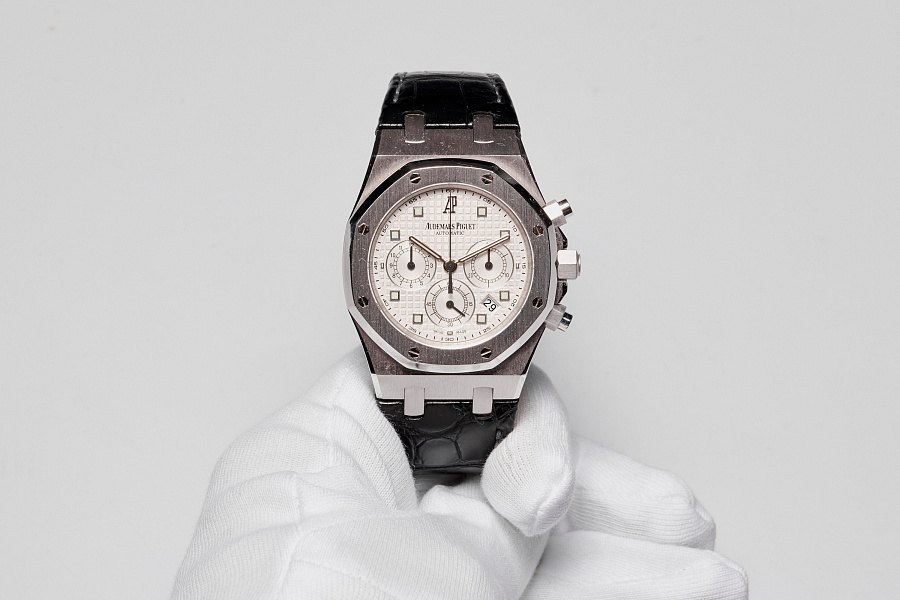 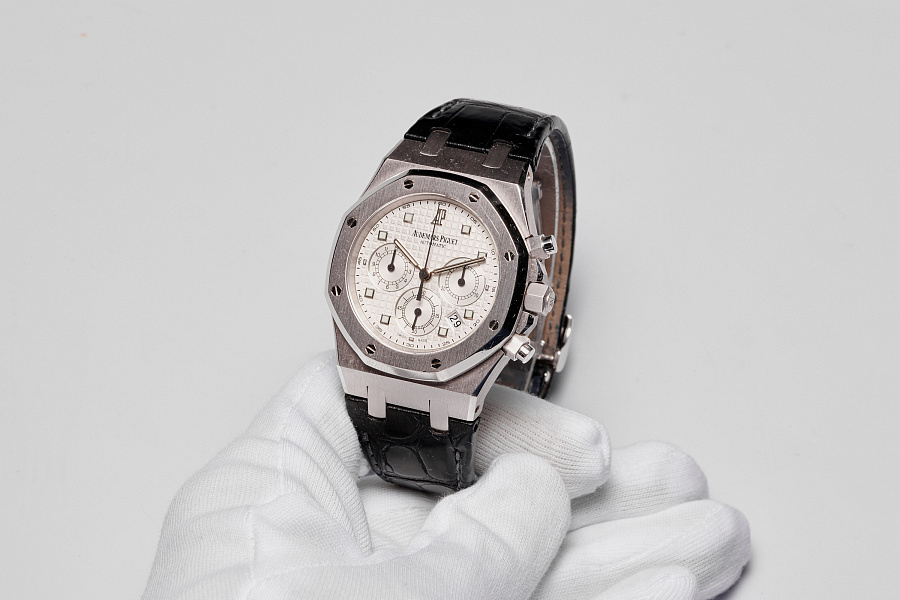 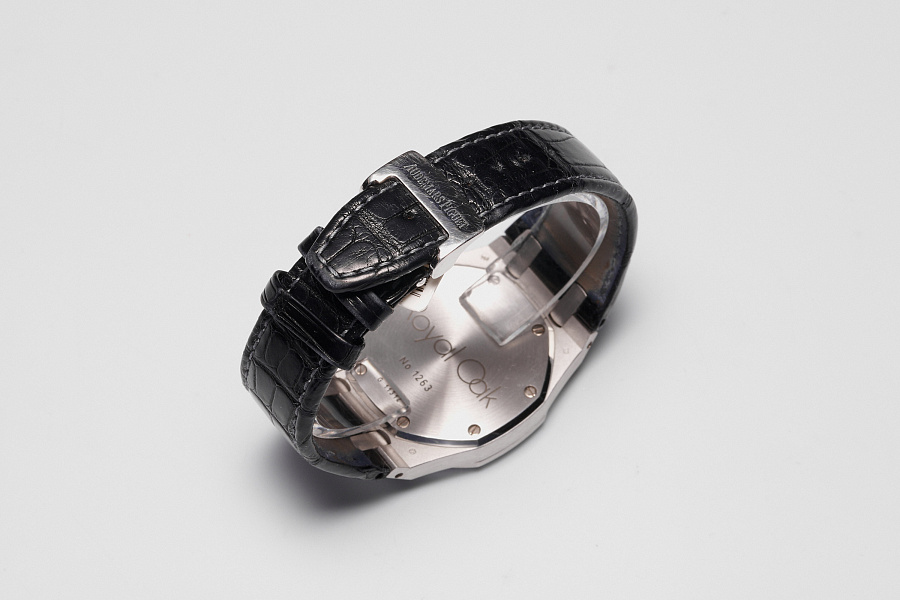 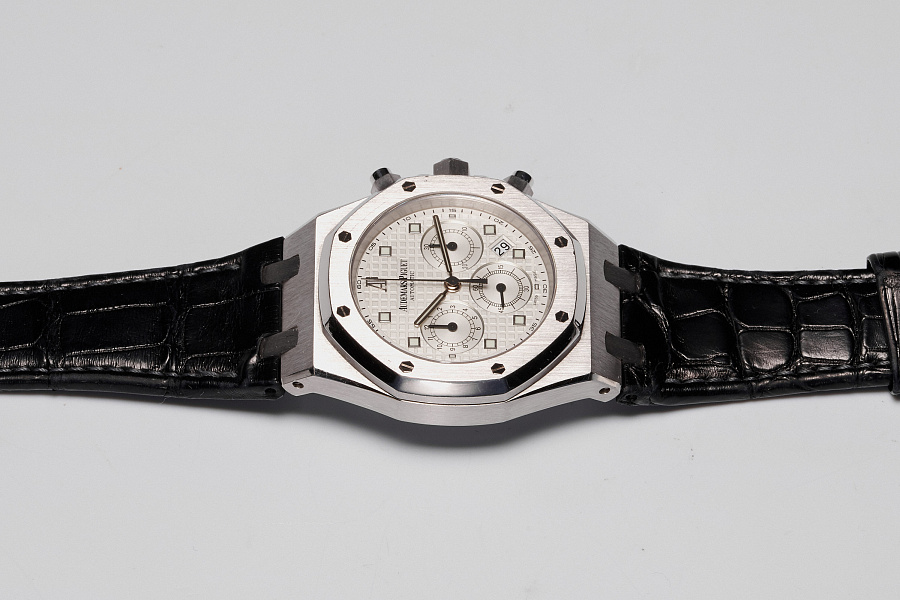 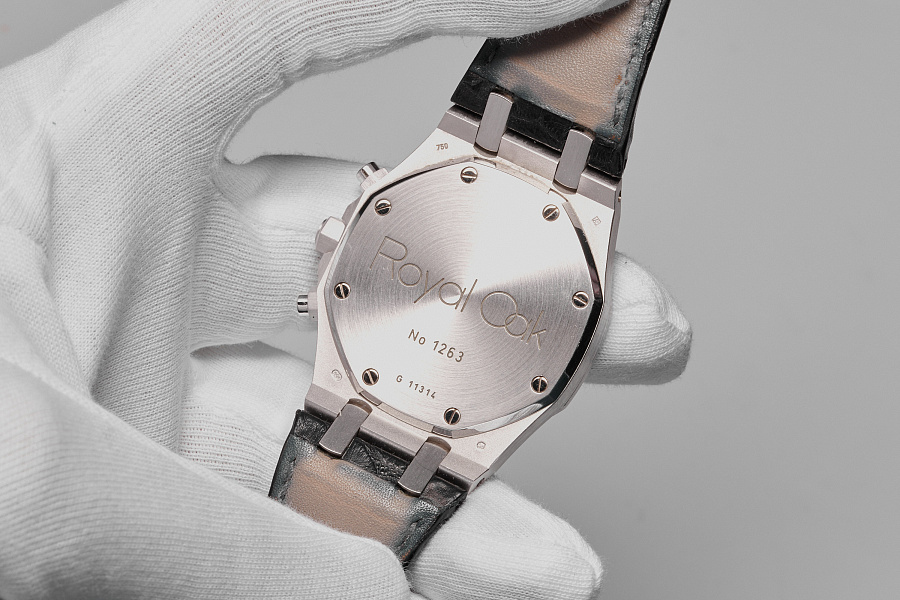 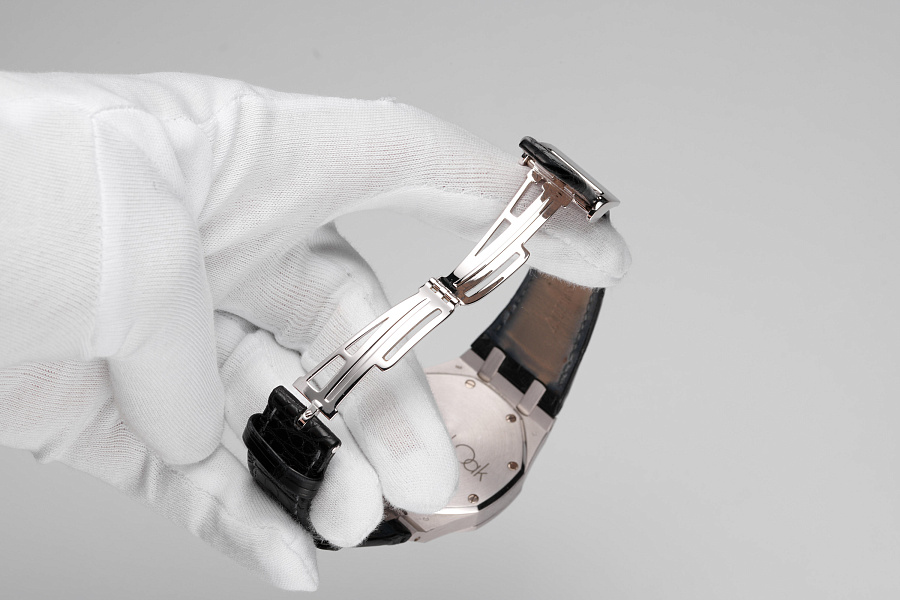 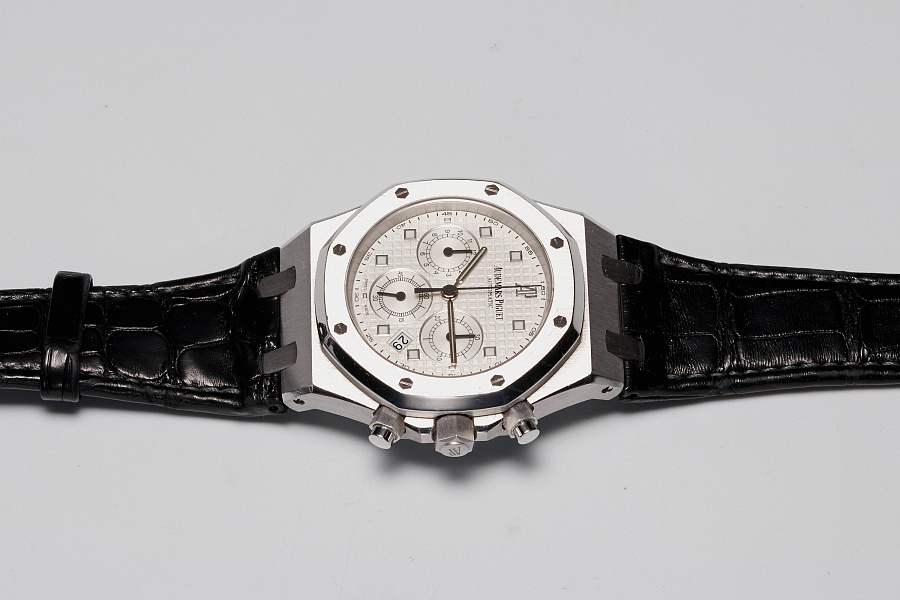 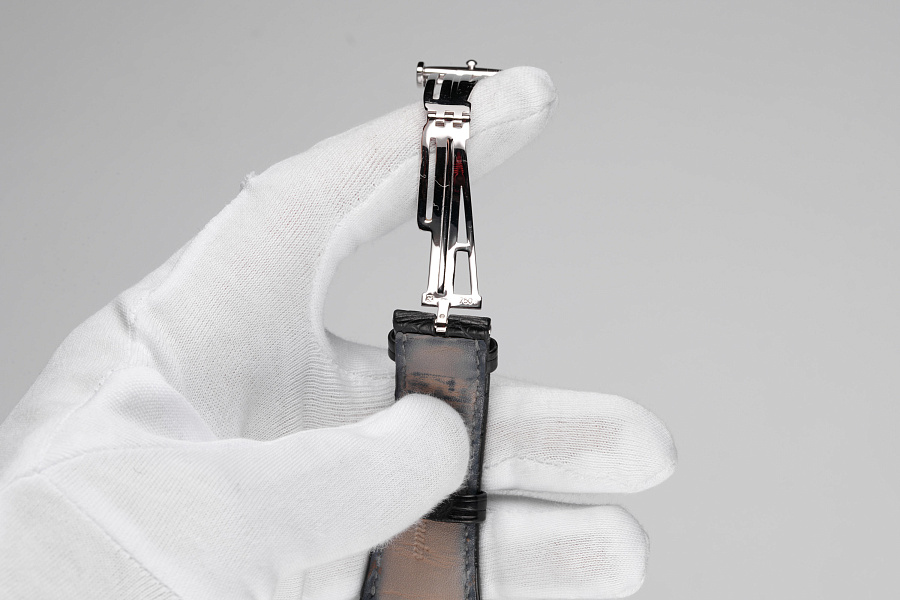 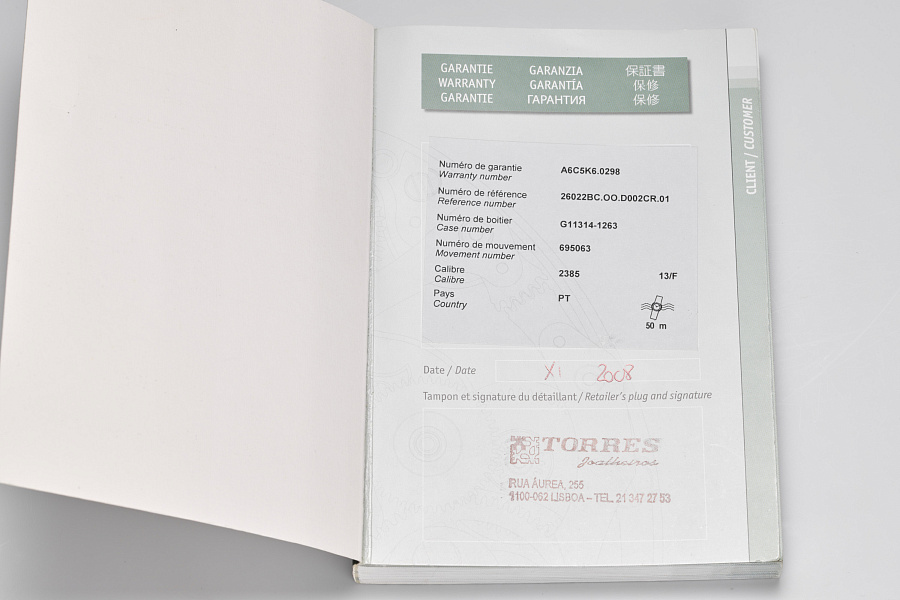 The present reference 26022 was produced by Audemars Piguet as a precious-metal Royal Oak Chronograph on either a leather or rubber strap, most likely launched circa 2004. Reference 26022 is widely accepted as a precious metal version of the second-generation Royal Oak Chronograph Ref. 26300 launched in 2008. However, there are reasons to believe that the production of reference 26022 began several years earlier, perhaps as far back as 2005 (Ineichen Auctioneers sold in 2022 a Ref. 26022OR example dated 2005, while Phillips mentions 2004 as the launch date). Multiple versions of model 26022 with yellow gold, rose gold, and white gold versions designated as Refs. 26022BA, 26022OR, and 26022BC, respectively, were produced until at least 2012, and are divided into two types. The first, early type of reference 26022, to which the present lot belongs, has a specific dial design with square luminous hour markers. The prototype of this dial is some examples of reference 25960, early precious-metal versions of the first-generation Royal Oak Chronograph Ref. 25860, launched in 1997. This design took its final form in 2005 with the release of La Boutique Paris Limited Edition Ref. 26035PT. The first-type design dials differ from those of reference 25960 by the use of wide Arabic numerals of the peripheral second/minute markings, contrasting to the normal-width numerals of the majority of Royal Oak Chronograph versions. In 2008, Audemars Piguet made an upgrade to reference 26022, most probably technically similar to the changeover from Ref. 25860 to Ref. 26300 (the replacement of the two-part case with a three-part one). With this modernisation, the designation of the reference 26022 has not changed, but the dial design was modified – reference 26022 of the latter period has the dial of the second type, which generally reminds one of the original design of the Royal Oak Chronograph Ref. 25860 with luminous baton indexes designed by Gérald Genta and a luminous triangular index at 12 o’clock. Production of the second-type 26022 continued until 2012, when the collection was relaunched in a 41mm case (Ref. 26320).

With a solid 18k white gold case on a black leather strap, lucid silvered dial decorated with an enlarged ‘Grande Tapisserie’ pattern, and tangible square hour markers, uncommon for the Royal Oak collection, this extremely charismatic watch represents a spectacular page in the history of the Royal Oak Chronograph collection.

The present example is undoubtedly a testament to this intriguing story with a case number that allows it to be attributed to the latest period of the existence of the first type of reference 26022, additional confirmation of which is a guarantee certificate dated 2008, the year of transfer to the second-type reference 26022.

Royal Oak Chronograph Ref. 26022 uses the self-winding caliber 2385, typical for Royal Oak Offshore Chronographs, which had been developed by the brand in collaboration with movement-blank producer Frédéric Piguet as a personalized version of its legendary caliber 1185. The watch case is fitted with screw-lock pushers and a screw-down crown, making it waterproof to a depth of 50 meters. The chronograph pushers are easy to unscrew and the requirement to apply smooth and pleasant pressure to activate the chronograph is a nice and very useful technical feature of caliber 2385 and its prototype Frédéric Piguet 1185.

With a solid 18k white gold case on a black leather strap, lucid silvered dial decorated with an enlarged ‘Grande Tapisserie’ pattern, and tangible square hour markers, uncommon for the Royal Oak collection, this extremely charismatic watch represents a spectacular page in the history of the Royal Oak Chronograph collection. Therefore, the Royal Oak Chronograph Ref. 26022BC.OO.D002CR.01 Type 1 would be an excellent purchase for the collector who desires an attractive, rare and highly collectible chronograph wristwatch from a world-renowned traditional watch brand, one of the undisputed leaders in the haute horlogerie watch market.