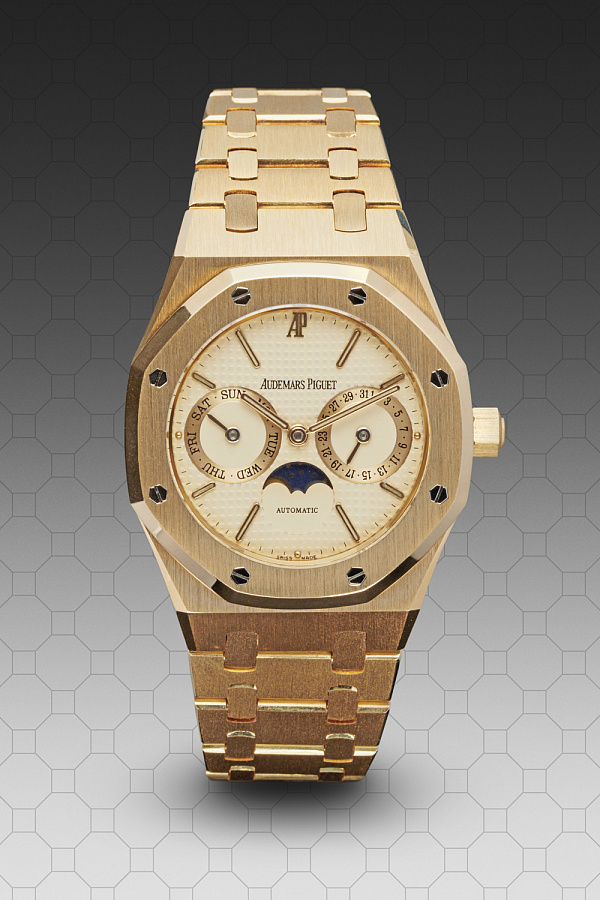 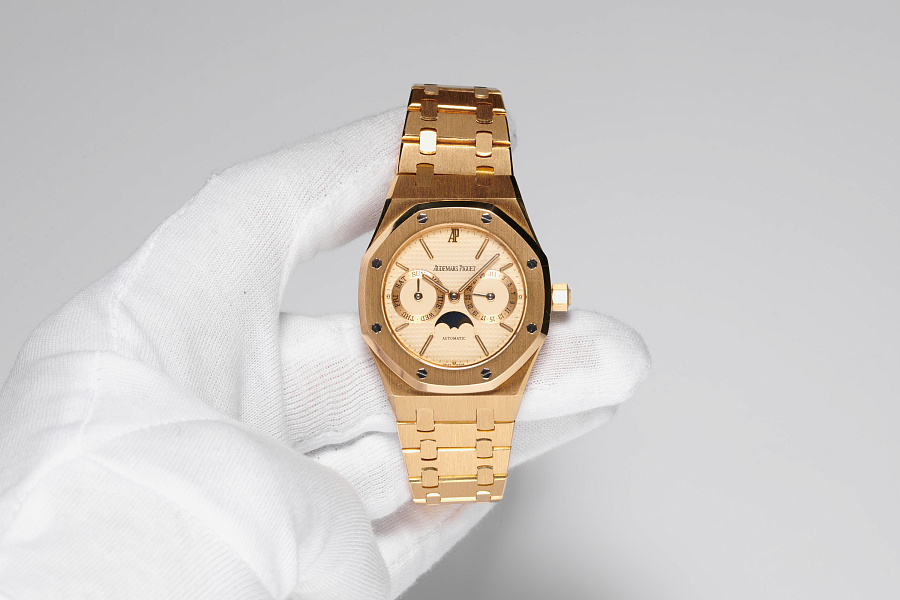 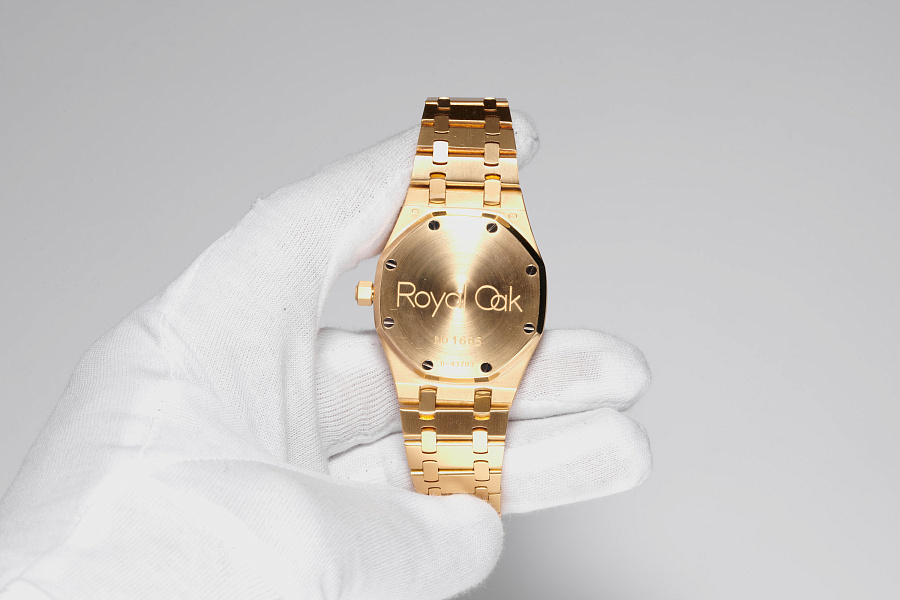 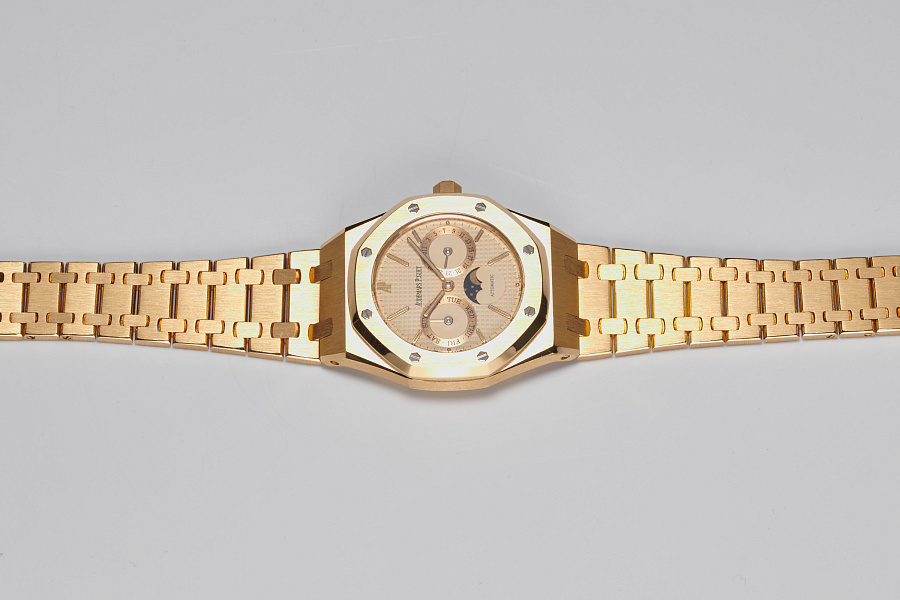 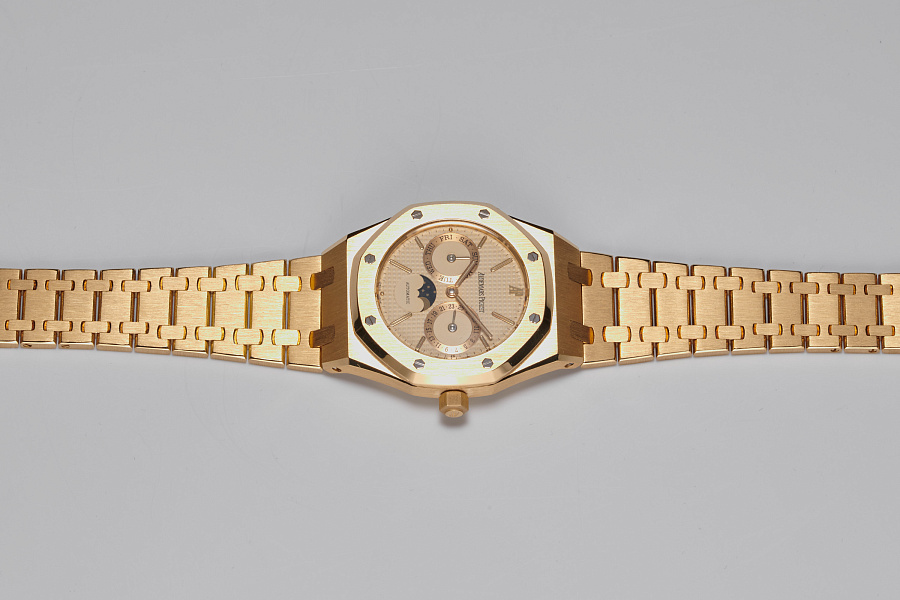 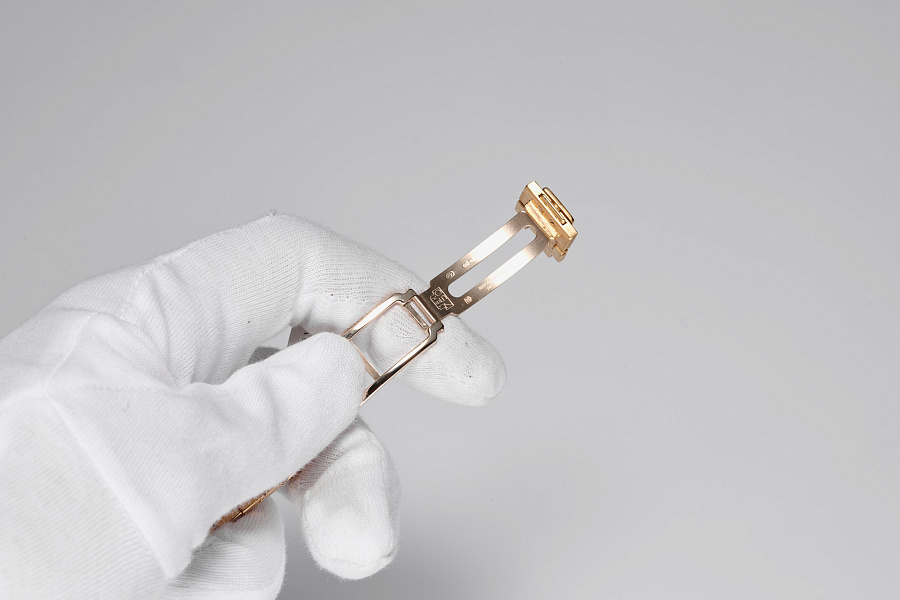 Audemars Piguet introduced the 36mm reference 25594 in 1985, as an evolution of reference 25572, ‘The Owl’, with added moonphase complication. From a technical point of view, such a set of complications should be recognized as a ‘small’ complication. However, a crowded structure of the dial, with three counters, is formed, which in general creates an appearance which is certainly pleasantly harmonious, and, similar to the dial of the perpetual calendar, is more complex in terms of caliber mechanics then simpler day-date models. All in all, reference 25594 should be considered a very successful design, although it falls short of such bestsellers as the ‘Jumbo’, three hands and date self-winding references, and chronographs. The 25594 production span lasted until the mid-2000s, with the brand offering a variety of execution versions, mostly in stainless steel, steel and yellow gold, and to a lesser extent in yellow gold. Reference 25594 has been completely discontinued, unlike the 25572, which received an upgrade in the early 2010s with the 39mm reference 26330, which certainly makes the 25594 a classic collectible, an intriguing chapter in the illustrious history of the Royal Oak collection. Caliber 2124/2825 of the present example is based on a caliber 889 movement-blank supplied by Jaeger-LeCoultre, long-term partner and supplier of Audemars Piguet, with the addition of a day-date and moonphase calendar module. For subsequent 25594 generations the caliber was upgraded to the 2224/2825 version.

The present reference 25594 Mk2 example has a distinctive full-gold appearance, hugely popular in the 1980s and in the beginning of 1990s.

Our thorough research of the 25594 execution versions shows that overall, the design evolution is consistent with the evolution of the classic 36mm three hands and date self-winding reference 14790. Due to the limited information available on watch production dating and numbering, it is not possible to offer definitive dating of the generations, which clearly requires further study with the assistance of the brand. Unfortunately, secondary market operators often find it necessary to hide numbers, making research difficult. However, three main generations appear – Mk1, Mk2 and Mk3. Mk1 follows the generally recognized early generation Royal Oak dial with a small logo, small original ‘Tapisserie’ pattern, and is divided into two types, with Type 1 characterized by the hour and minute hands and indexes of a stick shape, and Type 2 with Royal Oak’s original long narrow and rounded baton hands and indexes. Ref. 25594 Mk2 corresponds to the appearance of the new logo, while leaving the small original ‘Tapisserie’ pattern. Ref. 25594 Mk3 gets an enlarged ‘Grande Tapisserie’ pattern with a new logo and Arabic numerals on the 5-minute markers of the peripheral scale. Similar to reference 14790, we have defined two types of Mk3 dials: Type 1 is characterized by the flat lettering “Automatic” and round applied indexes at 2, 4, 6, 8, and 10 o’clock, while in Mk3 Type 2 there is the word “Automatic” in capitals similar to the logo, and wide short baton indexes at 2, 4, 8 and 10 o’clock.

The present reference 25594 Mk2 example has a distinctive full-gold appearance, hugely popular in the 1980s and in the beginning of 1990s. Its harmonious dial with characteristic small lettering of the logo (‘small logo’) and small original ‘Grande Tapisserie’ pattern is a feature of the second-generation execution (Mark 2). The distinctive full-gold vintage looks especially emphasized by a slightly patinated silvered dial getting light-cream tint, and definitely attracts modern collectors as one of the signature Royal Oak small-complication timepieces of the epoch.

Nowadays, due to the incredible popularity of Audemars Piguet Royal Oak watches, medium-sized Royal Oak references getting significant interest in this item as a collectible and as an investment. The present lot is a notable example of the classic yellow Royal Oak Day Date Moonphase reference 25594 of Mk2 dial execution, one of the most luxurious versions of this reference with a slightly patinated dial, which undoubtedly makes this watch even more desirable. Therefore, the Royal Oak Day Date Moonphase ‘Golden Nugget’ Ref. 25594BA.OO.0789BA.01 Mk2 would be an excellent purchase for the collector who desires a splendid, exquisite and rare small-complication medium-sized Royal Oak, produced by a world-renowned traditional watch brand, one of the undisputed leaders in the haute horlogerie watch market.