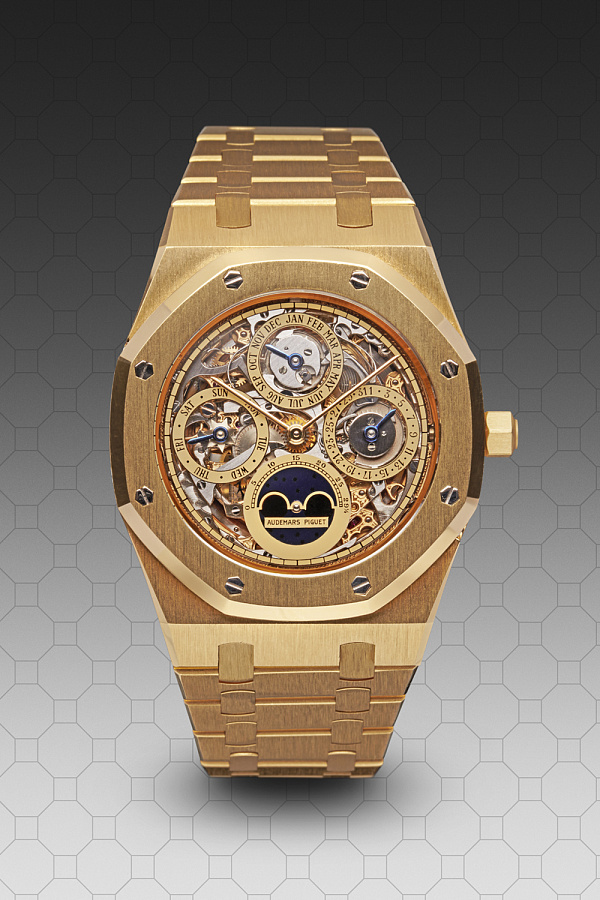 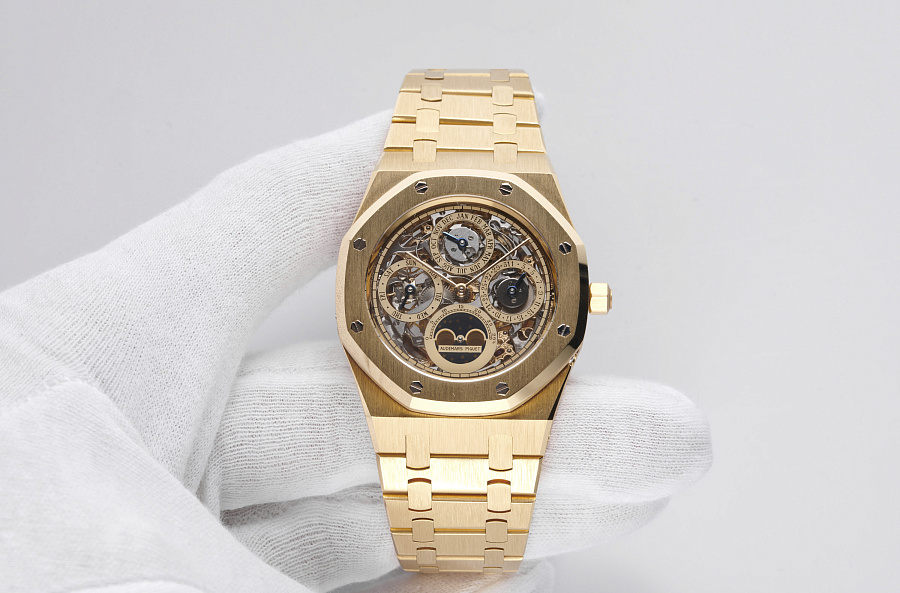 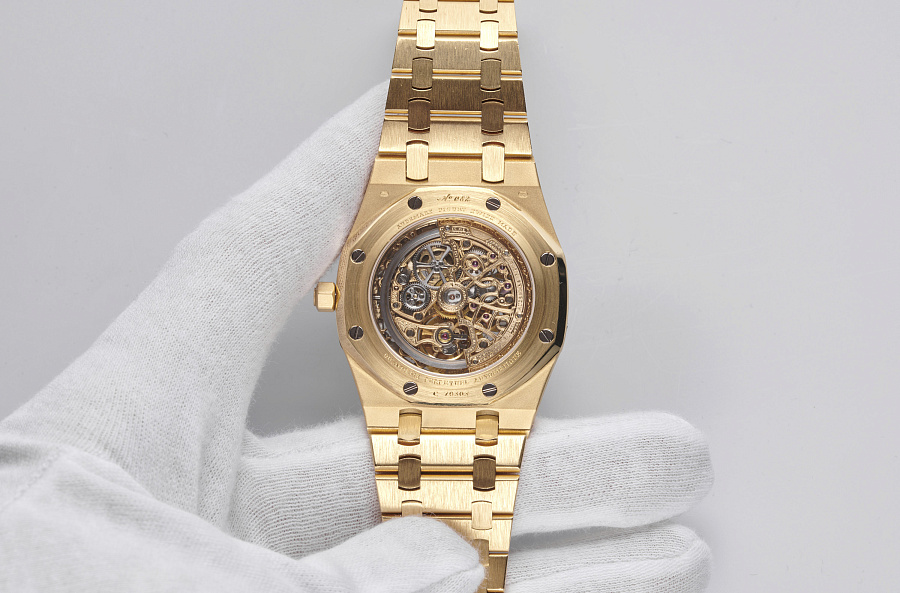 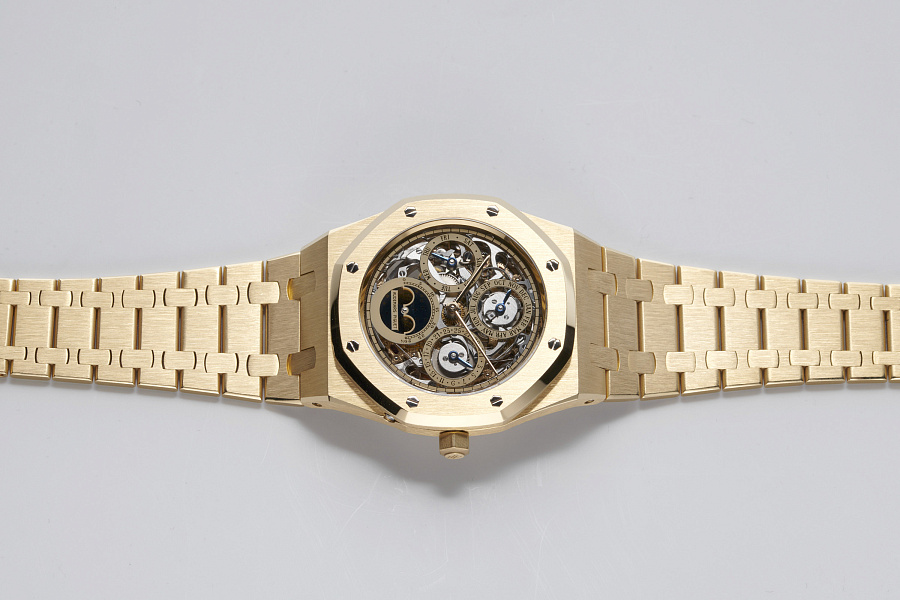 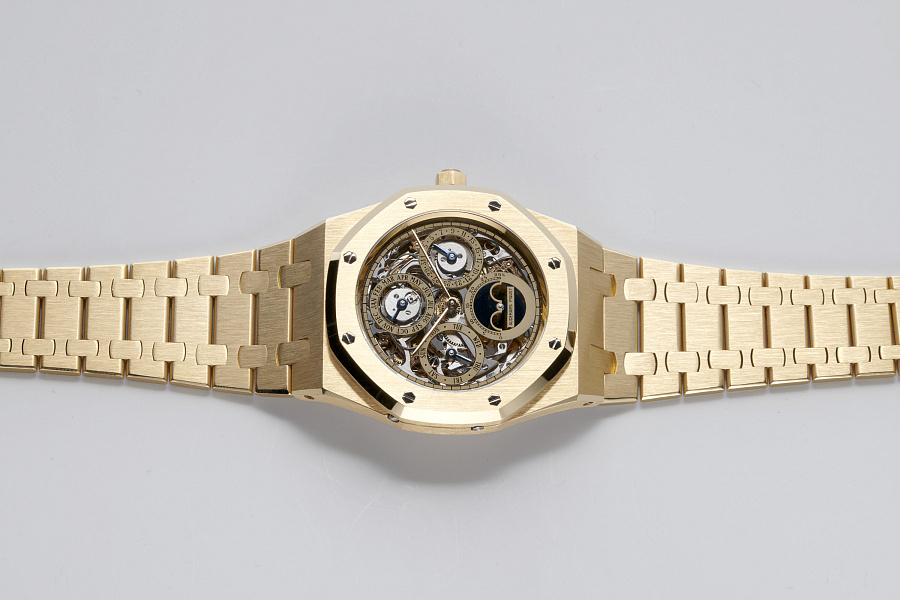 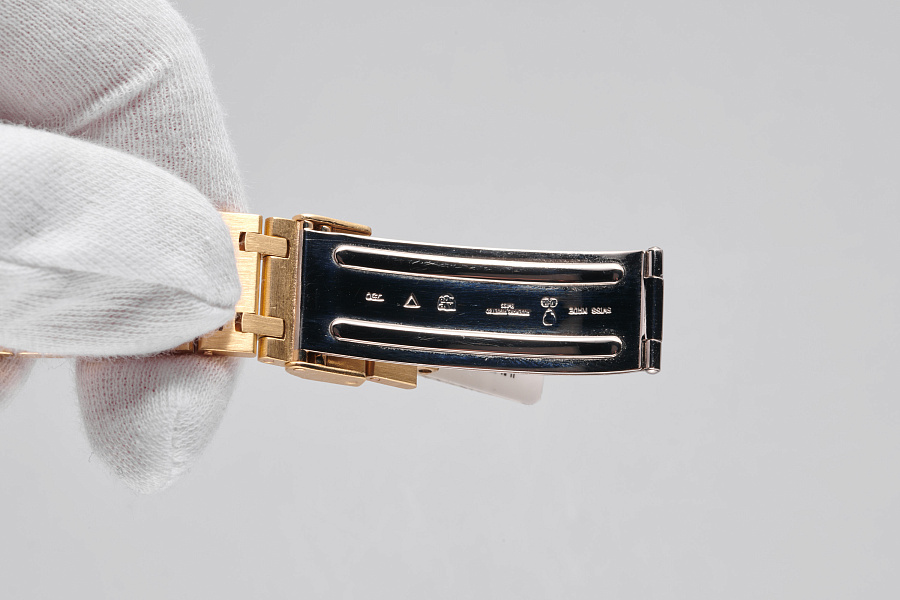 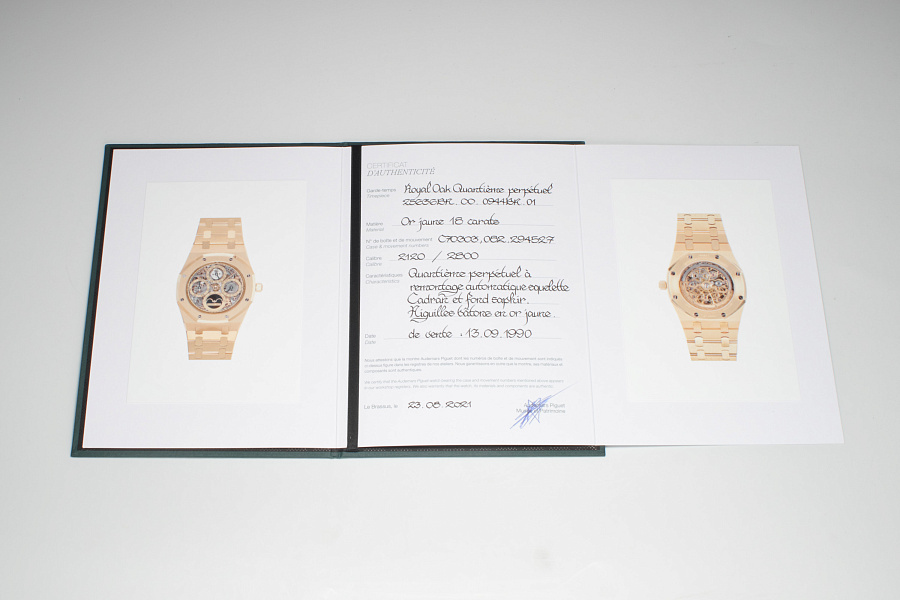 Reference 25636 was the first open-worked Royal Oak Perpetual Calendar watch. It was launched in 1983, the same year as the first Royal Oak Perpetual Calendar. Both were produced on the basis of the self-winding ultra-thin caliber 2120/2800, which had been developed by the brand in 1977. In the book “Audemars Piguet 20th Century Complicated Wristwatches”, the brand reports that 126 pieces of Ref. 25636BA were issued from 1983 to 1993, an average of 12 pieces per year, while the extremely successful basic round model 5548 of a classic design had a circulation of 2,183 over the same period (2,066 of which were in yellow gold). However, the brand continued production of reference 25636 further, probably for a few years. The newer design suggests the presence of the so-called ‘big’ logo, introduced by the brand also in 1993. We found items produced after 1993 with a combination of the ‘big’ logo and caliber 2120/2800SQ (which means the absence of a leap year indicator), which we indicate as the second-generation Ref. 25636. However, examples combining the reverse, that is the ‘small’ logo and caliber 2120/2802SQ (with the presence of a leap year indicator), were not found. The findings indicate an earlier transition to a new version of the dial with a ‘big’ logo, followed by a transition to the upgraded movement 2120/2802. However, one cannot exclude the possibility of a second version, which would have excellent prospects as a collectible.

The absence of a leap year indicator on the dial emphasizes the historical relevance of this model and distinguishes it from perpetual calendars of the modern era. Another significant feature of the present lot is the dial with the so-called ‘small’ logo.

The present example is powered by caliber 2120/2800 in an open-worked version of 2120/2800SQ. The small thickness of the movement made it possible to produce remarkably thin and elegant watches, which is especially significant given the complexity of the function of the perpetual calendar itself. With a thickness of 3.95mm, it remained the thinnest perpetual calendar movement with a central rotor of an automatic winding system until 2018. The basic automatic movement is based on a movement-blank supplied by Jaeger-LeCoultre, while the calendar module is based on a kit from the Dubois Dépraz factory. Both are long-term partners and suppliers of Audemars Piguet.

Caliber 2120/2800SQ is the first version of such a movement by Audemars Piguet; it differs from subsequent versions in that it was not equipped with a leap year indicator, although it was Audemars Piguet who, in the 1950s, invented this function for calendar wristwatches. The absence of a leap year indicator on the dial emphasizes the historical relevance of this model and distinguishes it from perpetual calendars of the modern era, which as a rule feature such an indicator. Another significant feature of the present lot is the dial with the so-called ‘small’ logo. It has the characteristic small logo letters, a feature of the early dials used by Audemars Piguet until 1993. Therefore, the present example certainly belongs to the classic period of Ref. 25636, as evidenced by its features and both the early model number in the series and the marking of the case from the C-series (1980 to 1986). Appearing at auctions quite rarely, these timepieces are highly coveted by collectors.

The Royal Oak Perpetual Calendar Open-worked ‘The First Generation’ Ref. 25636BA.OO.0344BA.01 is an excellent purchase for the collector who desires an attractive, very rare and highly collectible complicated mechanical wristwatch from a world-renowned traditional watch brand, one of the undisputed leaders in the haute horlogerie watch market. The present watch is the first open-worked perpetual calendar in the Royal Oak collection. Ref. 25636BA is a classic collectible that communicates a certain era in the development of the Royal Oak collection – from 1983 to 1993, when the classic leap year indicator was absent on the perpetual calendar dial, thus emphasizing the historical significance of this model and distinguishing it from the perpetual calendars of modern production, which as a rule have such a pointer. For the collector, undoubtedly the most interesting feature of this watch will be the ‘small’ logo dial of the first generation, characteristic for the production of that period. Ref. 25636BA very rarely appears at auctions since the total number of pieces produced is limited, with production discontinued in 1993, which undoubtedly increases the attractiveness of the present lot.