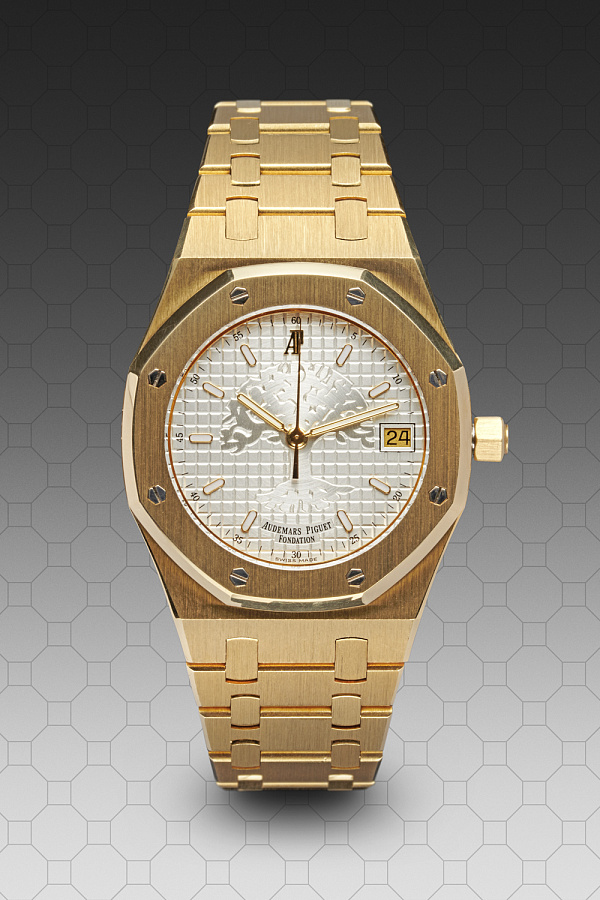 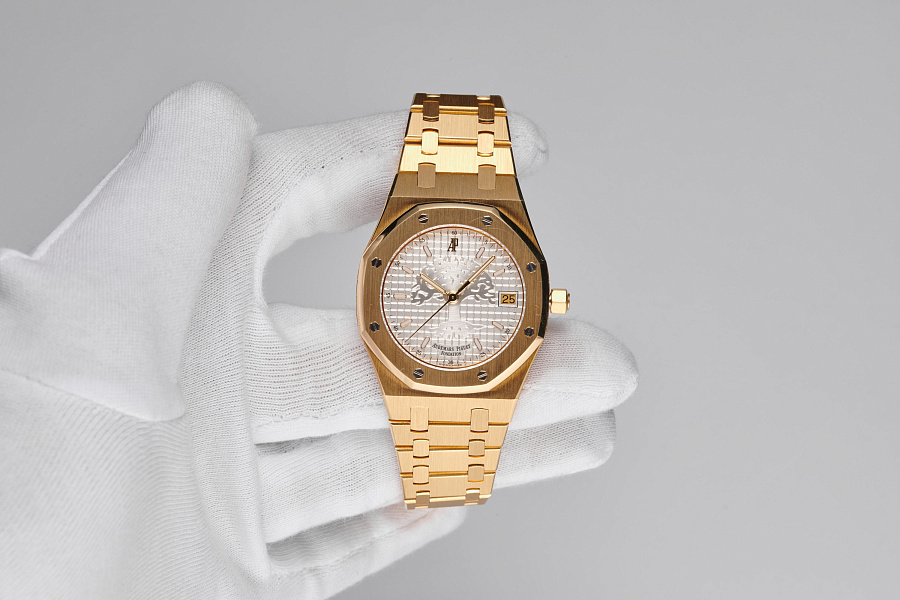 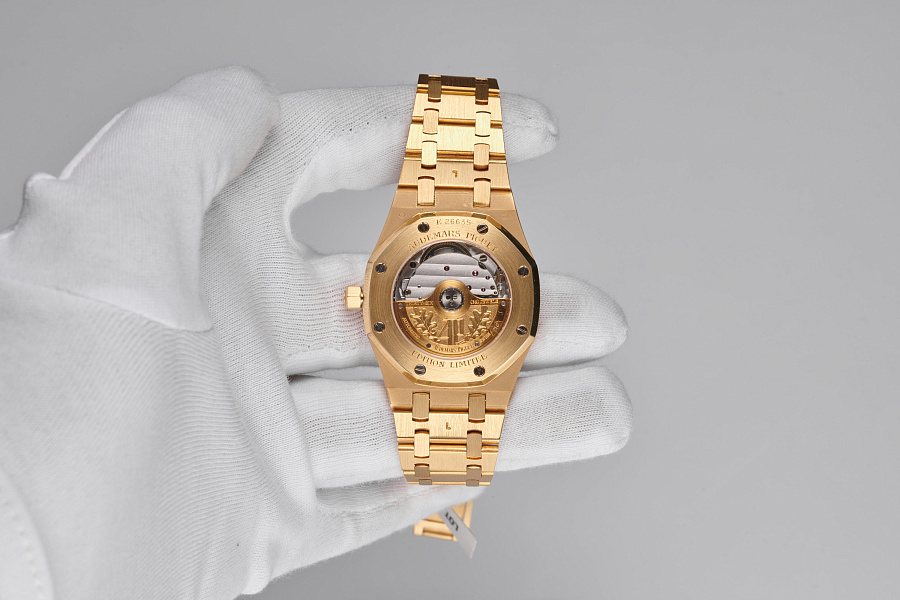 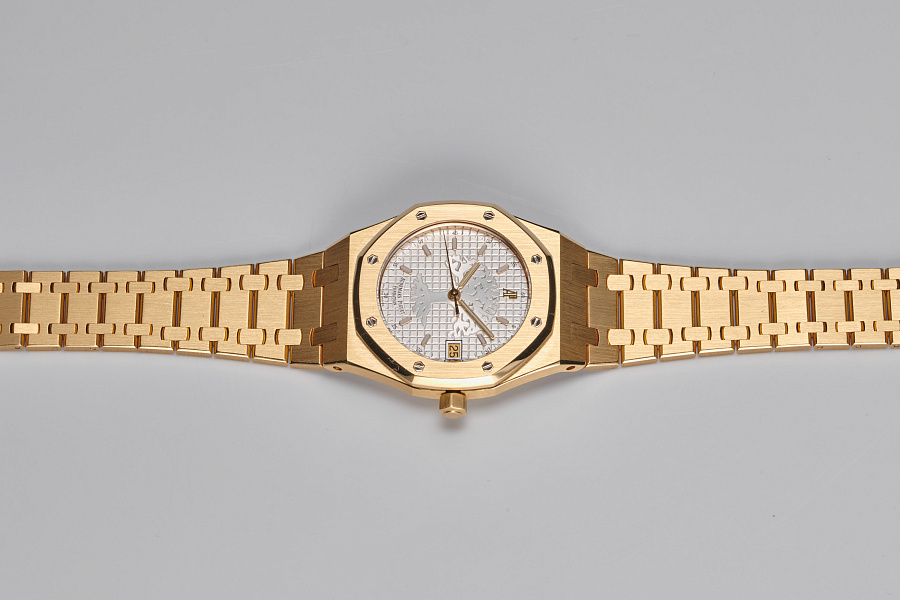 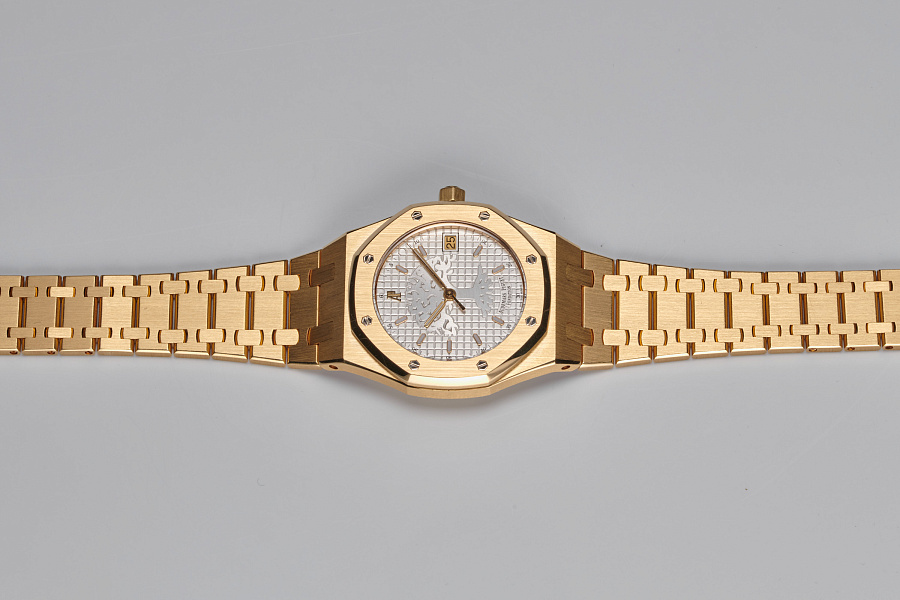 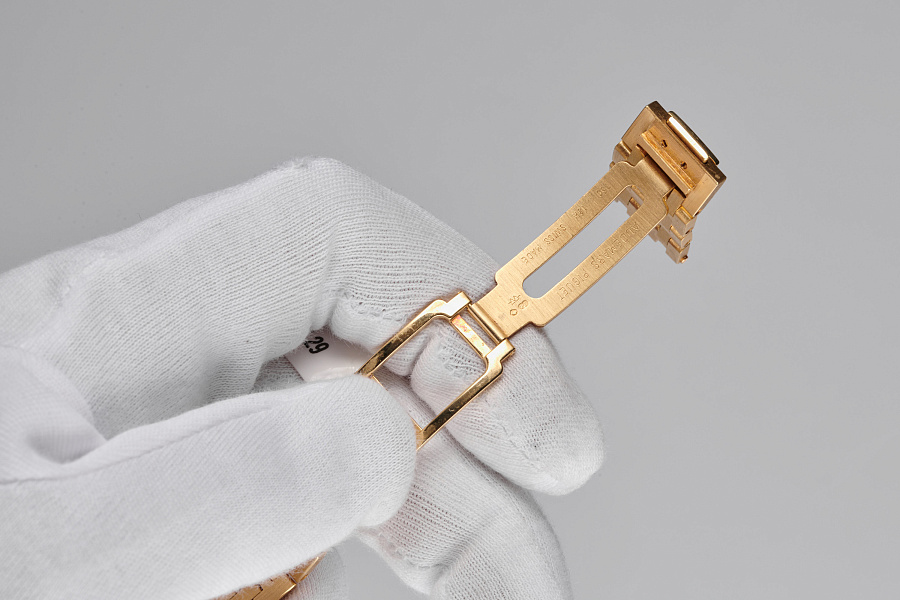 The sale of three commemorative limited editions, issued by Audemars Piguet in collaboration with the environmental NGO Time For Trees, led to a portion of the proceeds contributing to reforestation around the world. These limited editions are notable due to the unique dial configurations, as well as other rare features. The present limited-edition reference 15100BA was launched in 1999, together with the steel model 15100ST, also presented in this sale (lot 45). The release of both series was timed to coincide with the 125th anniversary of the brand, celebrated in 2000. Both followed the first series – the stainless-steel reference 14990ST of 1997 (limited edition of 250 pieces), featuring a dark-blue dial with an original small ‘Tapisserie’ pattern, and exhibition caseback with an oak tree engraved on the rotor.

The present reference 15100BA is a notable example of a medium-sized Royal Oak, produced as a variation of a basic 14790 reference in full 18k yellow gold execution and featuring a unique dial design with enlarged ‘Grande Tapisserie’ pattern and circular brushed oak tree image engraved at the centre. The caseback has a transparent window allowing one to discover the self-winding caliber 2225, which has a decorative oscillating weight with ‘AP’ brand symbol and two oak leaves engraved. The present reference, as well as steel 15100ST and the original ‘Time for the Trees Foundation’ reference 14990ST, are very rare and therefore outstanding 36mm Royal Oak references. The exhibition caseback gives a rare opportunity to see the self-winding caliber 2225, which is based on a caliber 889 movement-blank supplied by Jaeger-LeCoultre, long-term partner and supplier of Audemars Piguet.

An extremely rare, charismatic, and unusual medium-sized Royal Oak, which has an engraved image of an oak tree on the dial that is extremely appropriate for the Royal Oak collection

The present lot is a notable example of a rare limited-edition medium-sized Royal Oak with a dial that serves to evoke a ‘green’ environmental theme. Nowadays, due to the incredible popularity of Audemars Piguet Royal Oak watches, medium-sized Royal Oak references are gaining significant interest as collectibles and as investments. Therefore, the Time for the Trees Foundation Édition Limitée Ref. 15100BA.OO.0789BA.01 would be a very attractive purchase for the collector who desires an extremely rare, charismatic, and unusual medium-sized Royal Oak, which has an engraved image of an oak tree on the dial that is extremely appropriate for the Royal Oak collection, and produced by a world-renowned traditional watch brand, one of the undisputed leaders in the haute horlogerie watch market.