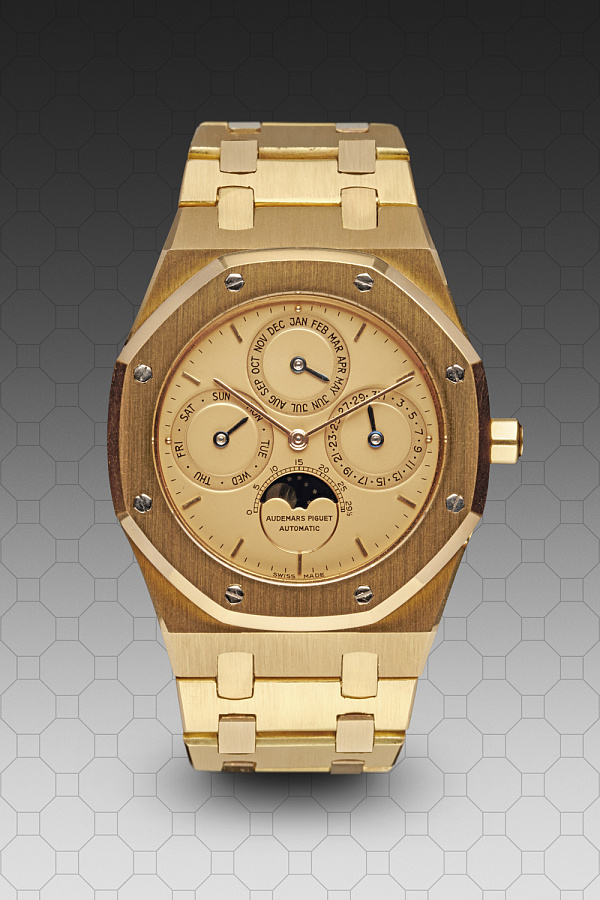 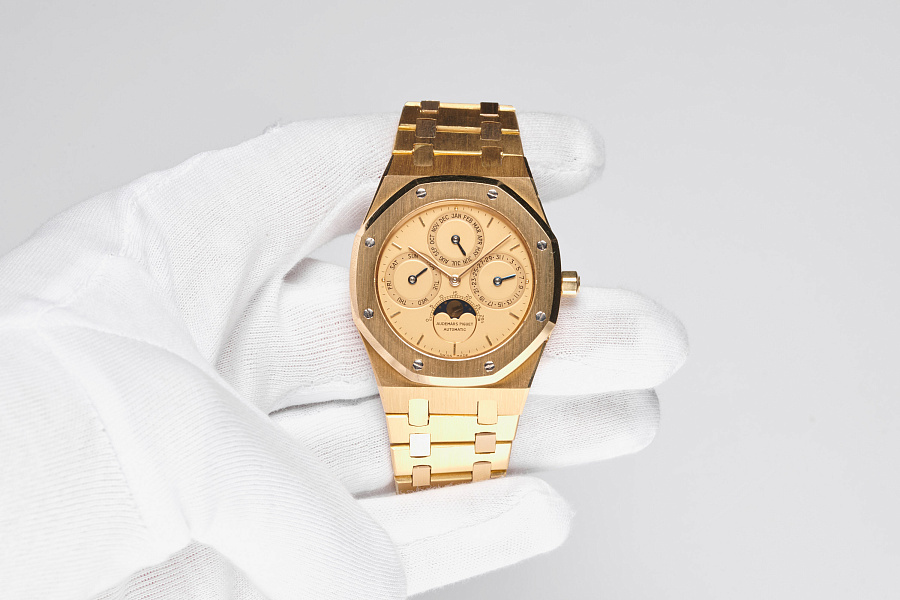 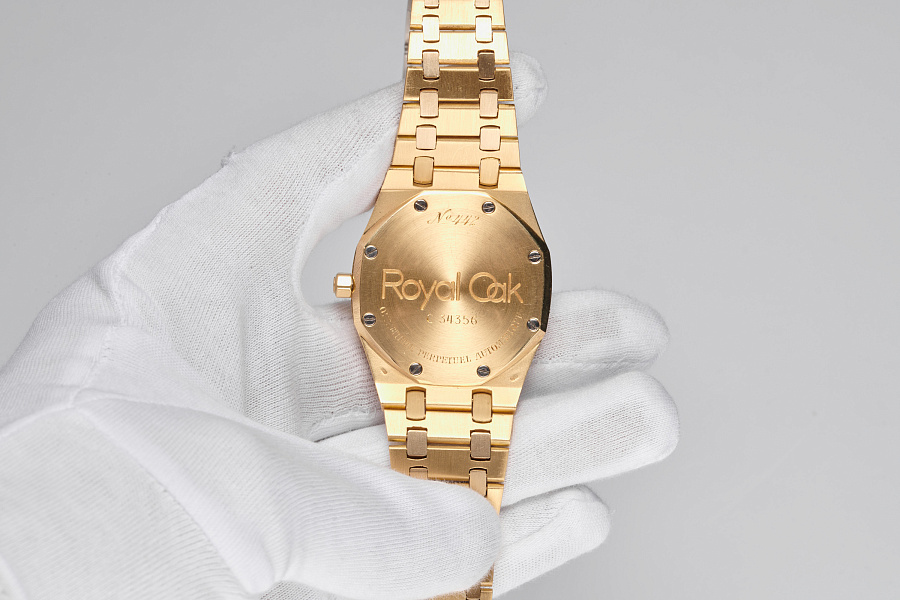 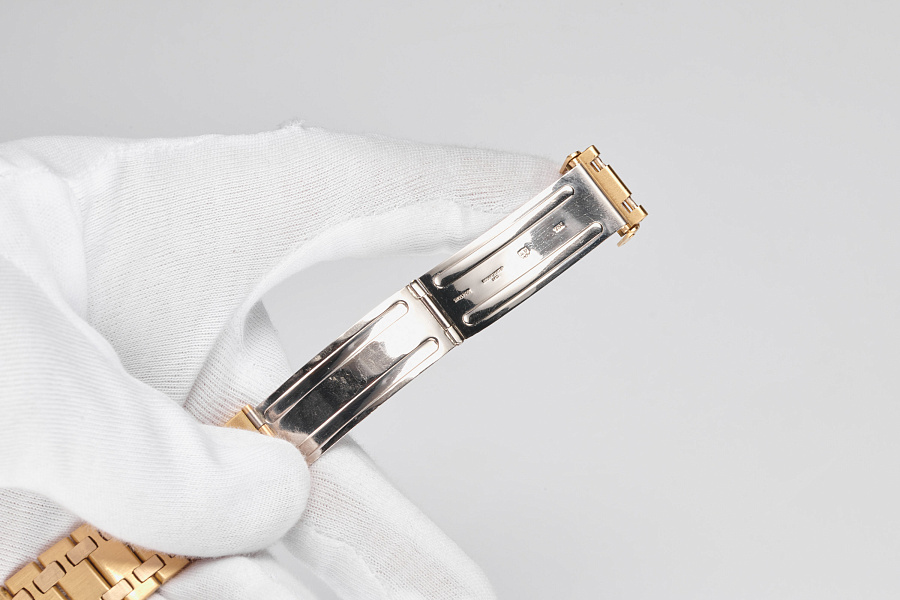 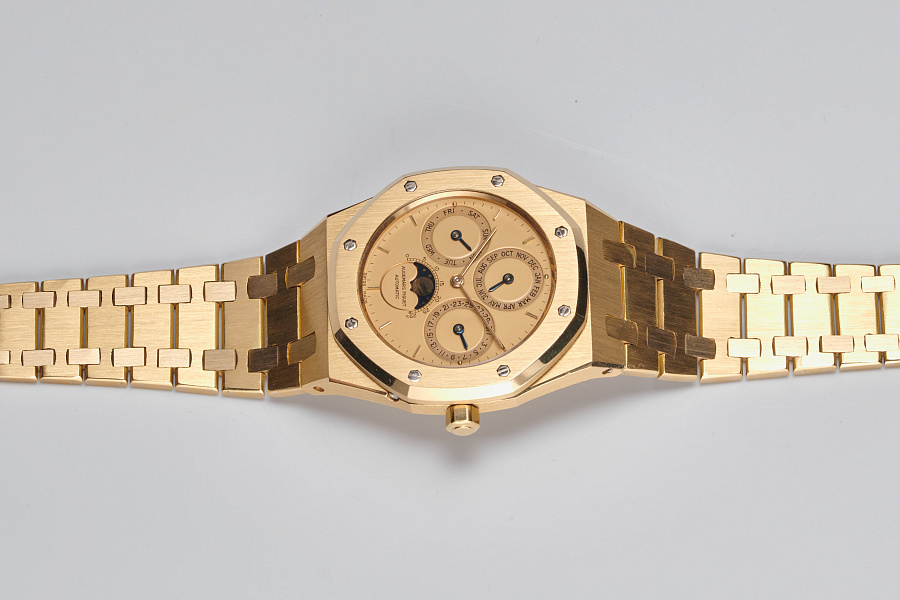 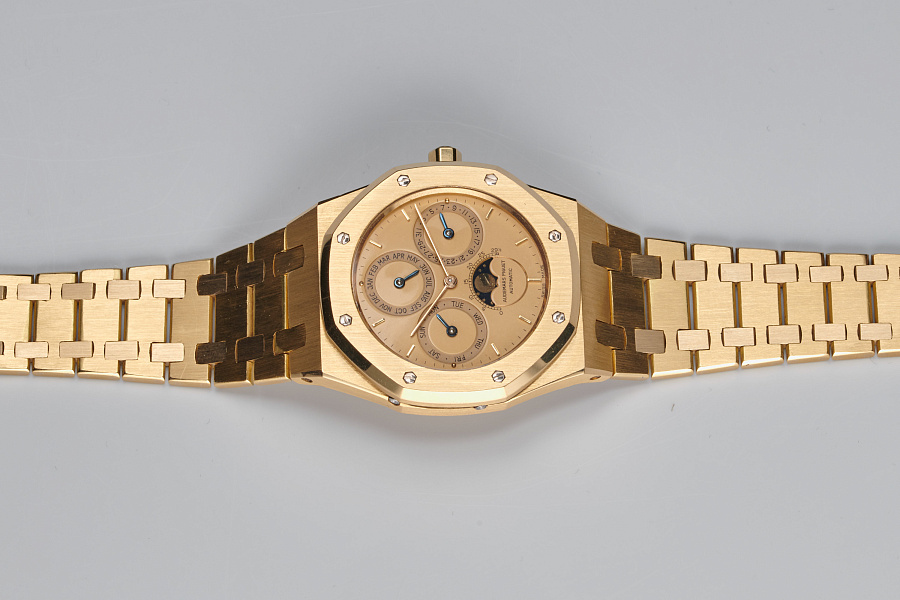 The characteristic feature of the present reference is its caliber 2120/2800 – the first Audemars Piguet automatic perpetual calendar in series production, and the second automatic perpetual calendar caliber ever produced. The small thickness of the movement made it possible to produce remarkably thin and elegant watches, which is especially significant given the complexity of the function of the perpetual calendar itself. Caliber 2120/2800 is the first version of such a movement by Audemars Piguet; it differs from subsequent versions in that it was not equipped with a leap year indicator, although it was Audemars Piguet who, in the 1950s, had invented this function for calendar wristwatches. With a thickness of 3.95mm, caliber 2120/2800, and its 2120/2802 and 5134 clones remained the thinnest perpetual calendar movement with a central rotor of an automatic winding system until 2018. The movement is based on a self-winding movement-blank supplied by Jaeger-LeCoultre, while the calendar module is based on a kit from the Dubois Dépraz factory. Both are long-term partners and suppliers of Audemars Piguet.

The distinctive 1980s vintage full-gold look attracts modern collectors as a signature timepiece of that epoch and due to the important perpetual calendar version becoming ever harder to obtain.

The present early C-series example has a distinctive full-gold appearance, hugely popular in the 1980s. Its beautiful matt yellow-gold-toned dial, with characteristic small lettering of the logo (‘small logo’) and no leap-year indication is a feature of the first-generation dials (Mark 1) that Audemars Piguet used in Royal Oak Perpetual Calendars until 1993. The distinctive 1980s vintage full-gold look attracts modern collectors as a signature timepiece of that epoch and due to the important perpetual calendar version becoming ever harder to obtain.

For the discerning collector, we additionally report that early Royal Oak Perpetual Calendars, including the present reference, offer a promising subject for thoughtful study. As far as we know, there are several varieties of Ref. 25654BA.OO.0944BA.01, making collecting even more fun. Here we should note the following, the most important varieties, which mainly relate to the execution of the dial. Firstly, there is either the old (‘small’) logo type of dial, by tradition designated as Mark 1, or the new logo (the surfacing examples with the new logo show that the production of the reference continued for some time after 1993, or we assume that these were replacement dials). Secondly, the hour markers at 3, 9 and 12 o’clock – in the first version these are larger gold pearls that are set on the edges of the counters (‘tight pearls’); in the second version, small gold pearls are spaced from the edges of the counters (‘loose pearls’); while in the third version, there are printed strokes (‘no-pearls’; note that the matte silvered dial design, the second main version of this reference, is used here). Thirdly, there are dials with calendar markings in either English, French or German. Additionally, other versions should be noted, including those with an unsigned (early, ‘flat’) or signed ‘AP’ (later, ‘signed’) crown, as well as a white gold first-generation Royal Oak double folding clasp or yellow gold second-generation double folding clasp.

The Royal Oak Perpetual Calendar ‘Golden Nugget’ Ref. 25654BA.OO.0944BA.01 C-series would be an excellent purchase for the collector who desires a charismatic, and rare perpetual calendar wristwatch from a world-renowned traditional watch brand, one of the undisputed leaders in the haute horlogerie watch market. The present reference is the earliest perpetual calendar in the Royal Oak collection, with which it began the use of complication calibers. Ref. 25654BA is a classic collector’s item that communicates a certain era in the development of the Royal Oak collection – from 1982 to 1993, when the classic leap year indicator was absent on the perpetual calendar dial. This epoch’s feature is further emphasized by the charismatic full-gold ‘Golden Nugget’ execution. For the collector, undoubtedly the most interesting feature of this watch will be the matte ‘non-tapiserrie’ Mark 1 yellow-gold-toned dial, with the so-called ‘small logo’, characteristic for the production of the early period. Other execution features, rare and typical for the early production period, undoubtedly increase the attractiveness of the present lot.