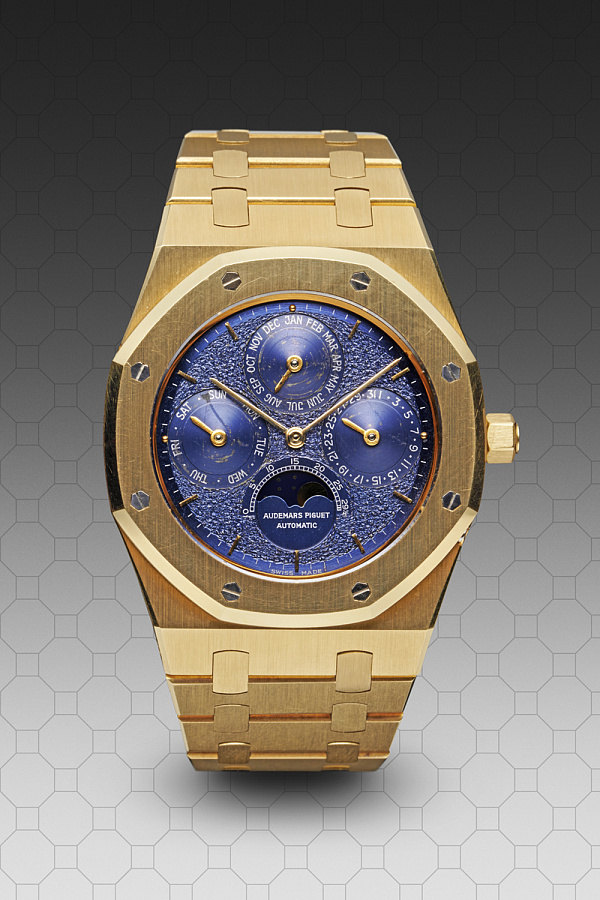 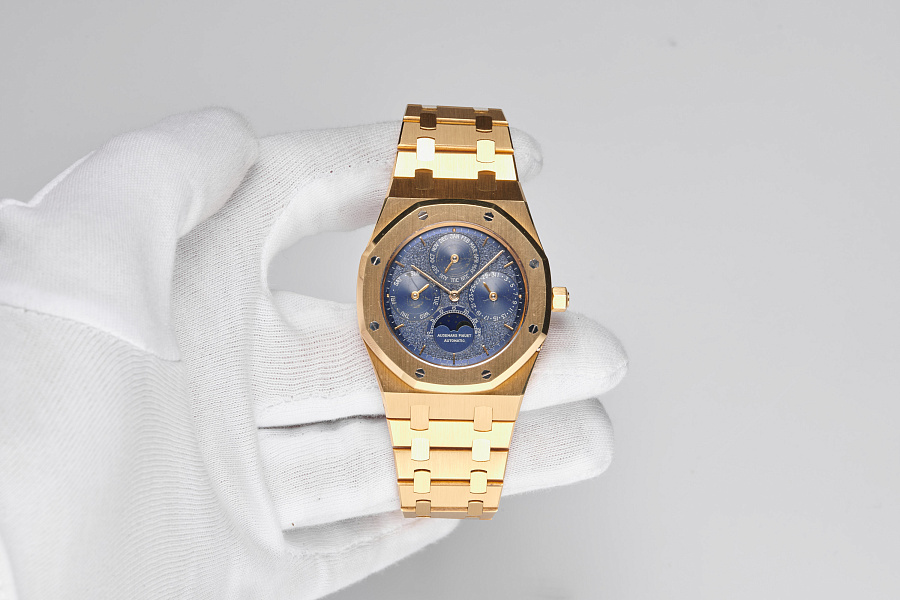 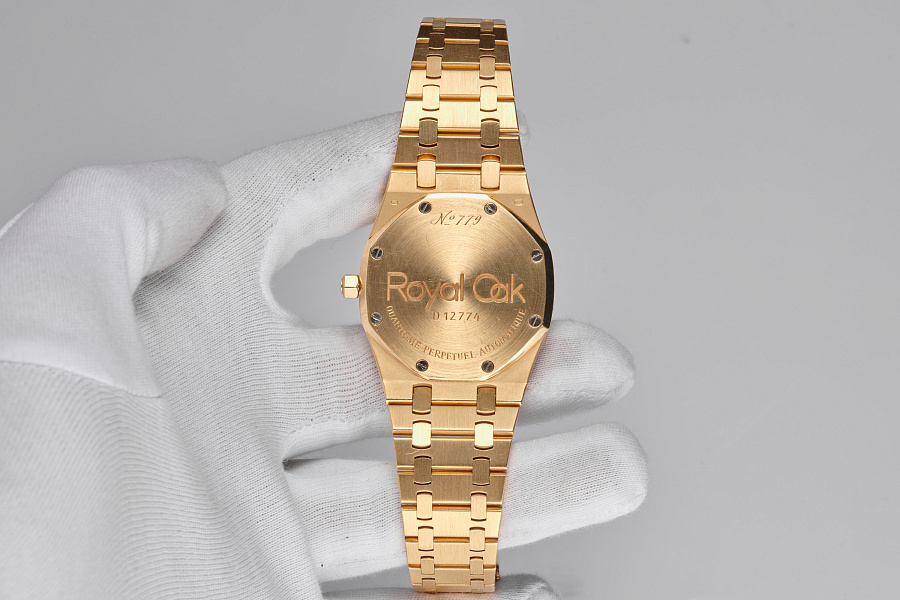 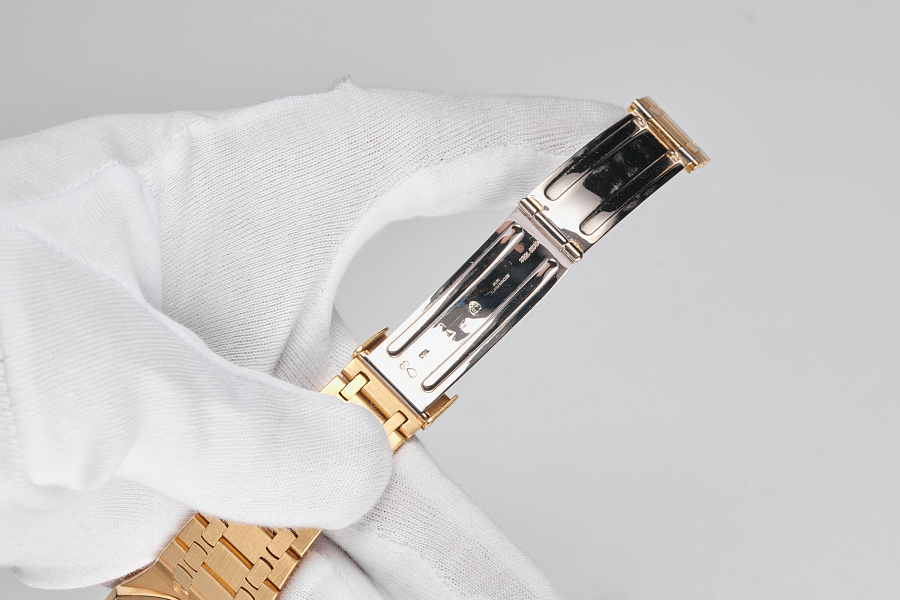 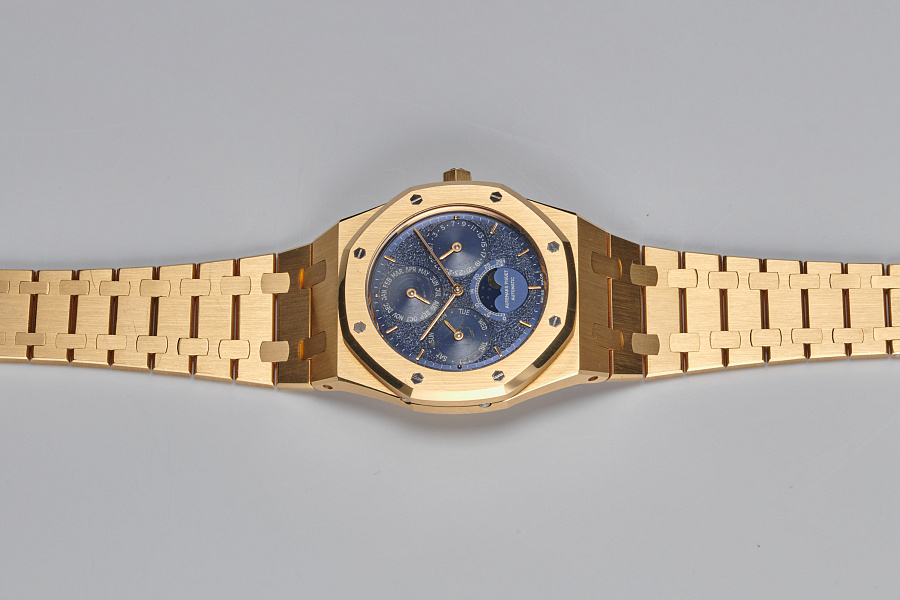 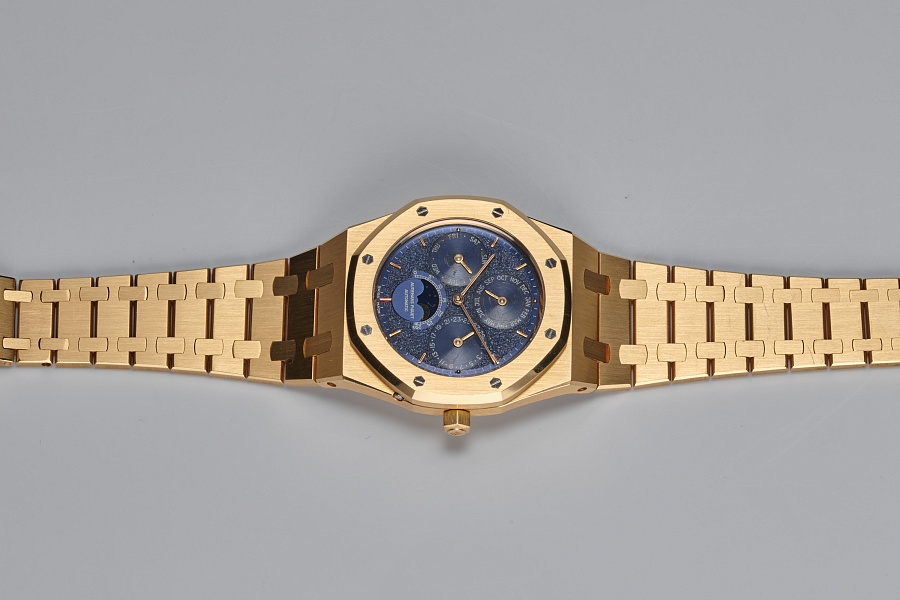 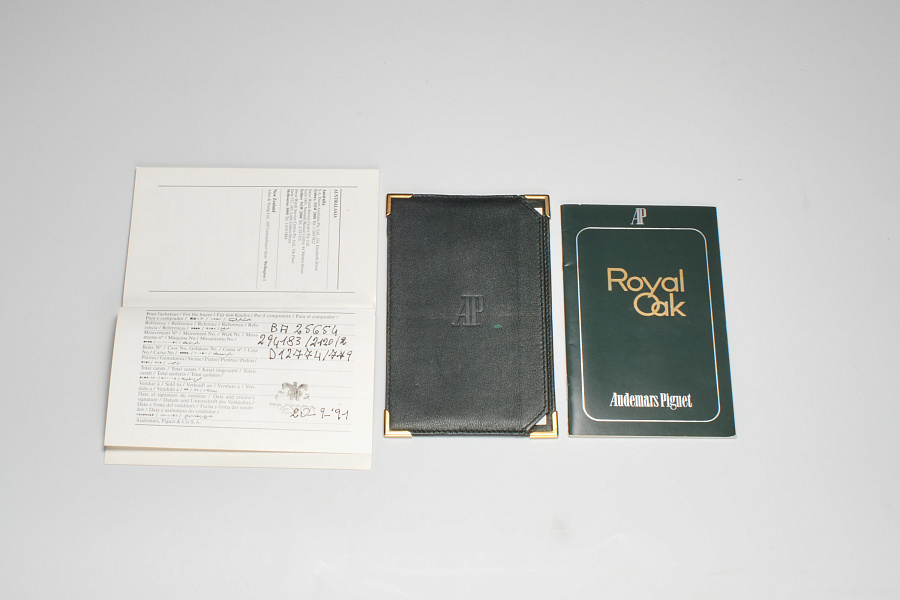 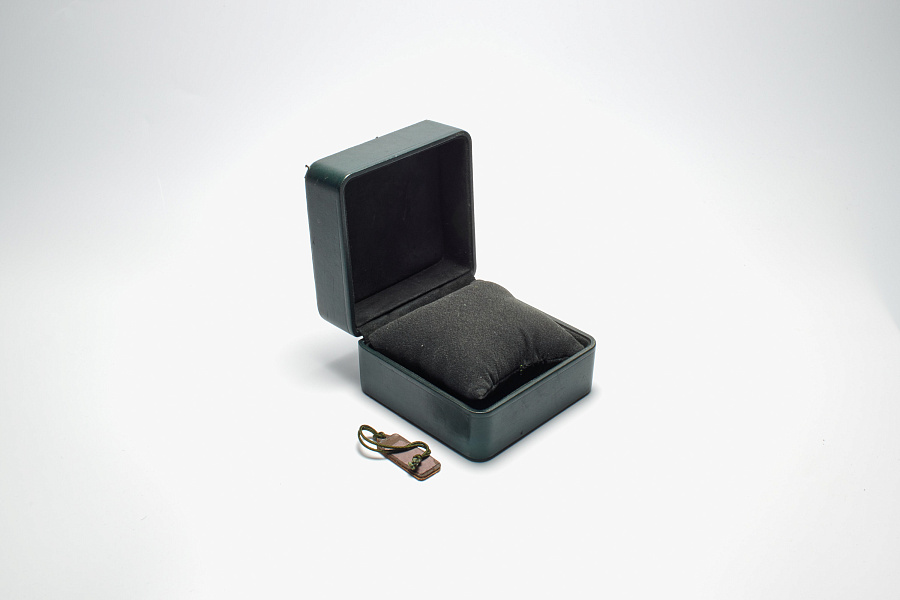 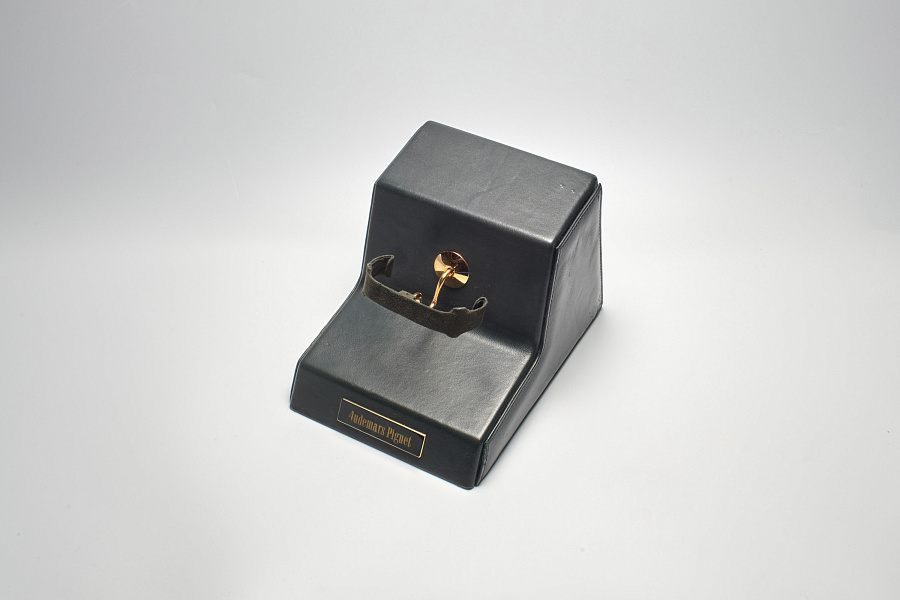 A fine hammered texture is rarely used to decorate a watch dial. The origin of this decor probably comes from the ancient technique of finishing the surface of copper and bronze objects a long-term processing of blows from a hammer or other hard-tipped tools. This technique made it possible to make the surface harder and more wear-resistant than that of raw metal, and it was further used by goldsmiths. Audemars Piguet fitted a few of their classic perpetual calendars – Ref. 5561/25561 (1980–1987) and Ref. 25657 (1982–1993, according to “Audemars Piguet 20th century complicated wristwatches” book) – with dark blue dials, finely hammered by hand. They use the now famous designation ‘Tuscan’ dial. There are only a handful of known instances where the ‘Tuscan’ dial has appeared in a Royal Oak watch, mainly of a white metal execution. Yellow gold Royal Oak Perpetual Calendars are even rarer – at present there are known to be only an example sold by Phillips and the present example, previously sold by Antiquorum.

The spectacular memorable design, exquisite finish and obvious extreme rarity of such watches make collectors show a very keen interest in them. One might say, the attention of collectors is riveted to them. A Royal Oak Perpetual Calendar with dark blue ‘Tuscan’ dial, similar to the present example but with serial and case numbers apart by seven digits, was recently sold by Phillips auctioneers and declared by them to be “the only known of its kind”, becoming a sensation and featuring in several publications.

Yellow gold Royal Oak Perpetual Calendars are even rarer – at present there are known to be only an example sold by Phillips and the present example, previously sold by Antiquorum.

Audemars Piguet produced the Ref. 5654/25654 Royal Oak Perpetual Calendars from 1982, two years prior to the date of the official launch, and the brand states 800 pieces were made from 1982 to 1993, with 422 of those being in yellow gold (Phillips reports 430 pieces in yellow gold), mainly with a matt yellow-gold-toned Mk1 dial (‘champagne’ dial), though some had a matt silvered dial, and as far as we know just a few timepieces with a notable dark blue ‘Tuscan’ dial.

The present example has a distinctive full-yellow-gold appearance, which creates a harmonious contrast to the dark blue ‘Tuscan’ dial. The dial, with characteristic small lettering of the logo (‘small logo’) and no leap-year indication is a feature of the first-generation dials (Mark 1) Audemars Piguet used in Royal Oak Perpetual Calendars until 1993. For the discerning collector, we additionally report that the present example features a ‘tight pearls’ dial variety, meaning the larger gold pearls are set on the edges of the counters at 3, 9 and 12 o’clock, contrary to the Phillips example version with the smaller gold pearls spaced from the edges of the counters (‘loose pearls’). Another difference is the scales and inscriptions on the dial produced with a white colour, contrary to the gilded font of the Phillips example, although the hands and indices are in yellow gold in both examples.

The Royal Oak Perpetual Calendar Yellow Gold ‘Tuscan’ Dial Ref. 25654BA.OO.0944BA.02 would be an excellent purchase for the collector who desires an extremely rare, important and charismatic perpetual calendar wristwatch from a world-renowned traditional watch brand, one of the undisputed leaders in the haute horlogerie watch market. The present reference is the earliest perpetual calendar in the Royal Oak collection, with which it began the use of complication calibers, and the present lot is one of just two currently known Ref. 25654BA examples fitted with the rare and distinctive ‘Tuscan’ dial. The other execution features, rare and typical for the early production period, undoubtedly increase the attractiveness of the present lot.