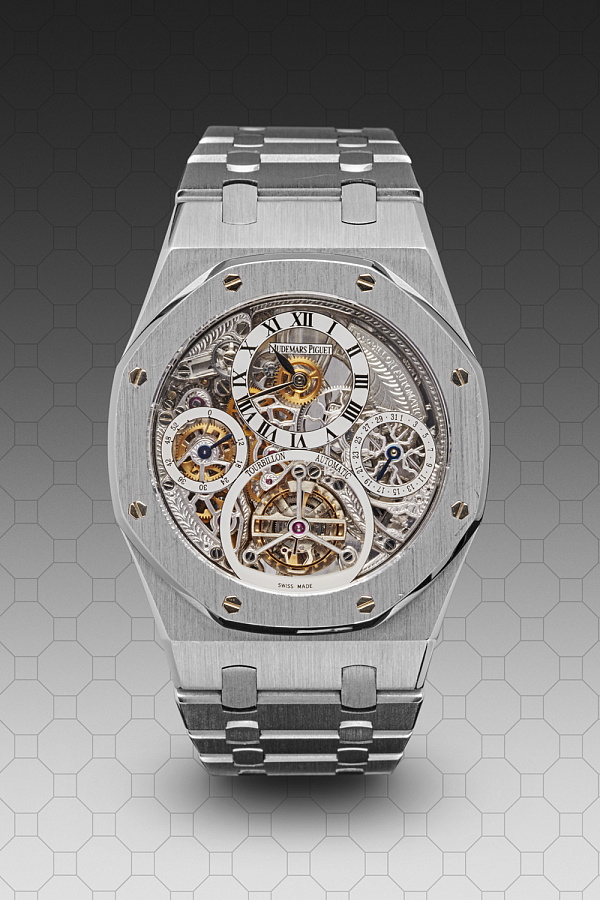 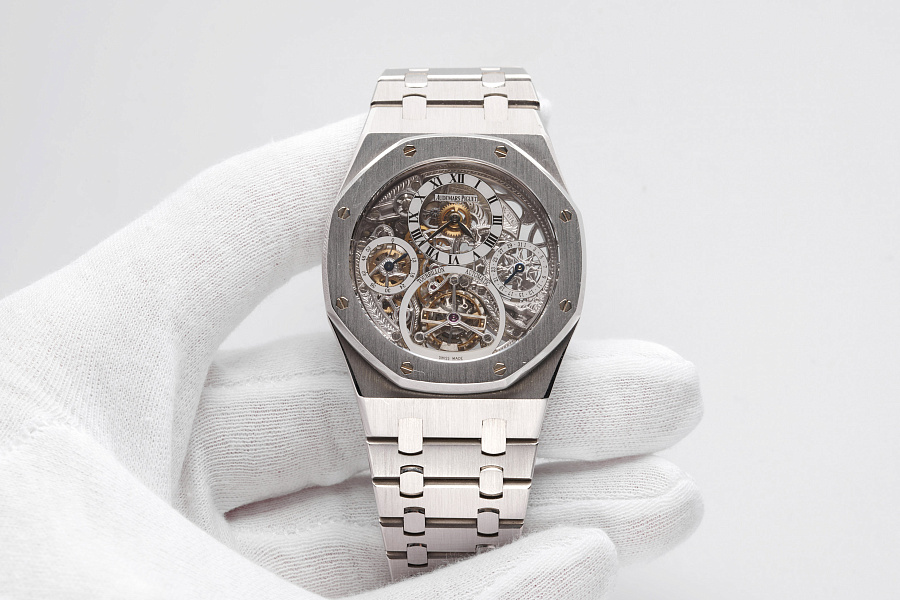 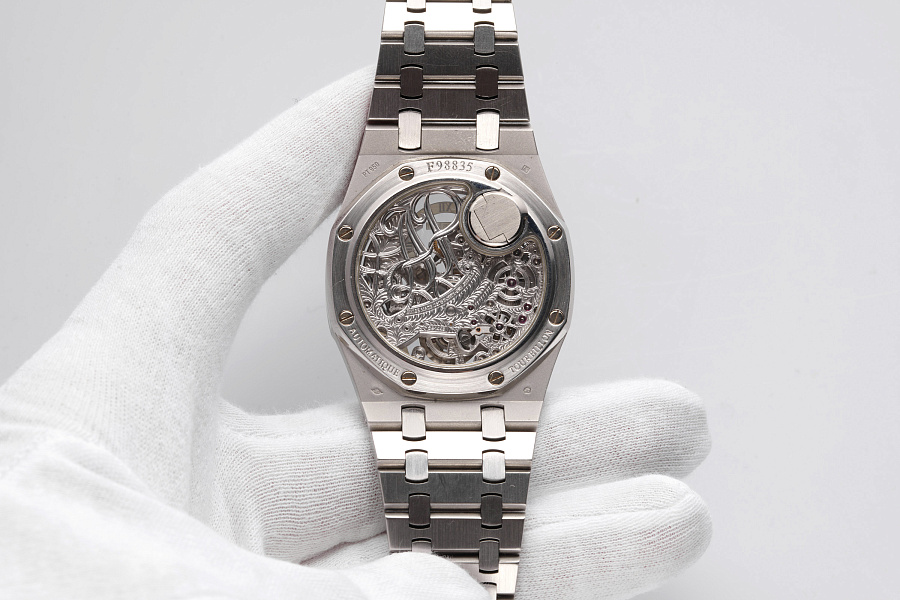 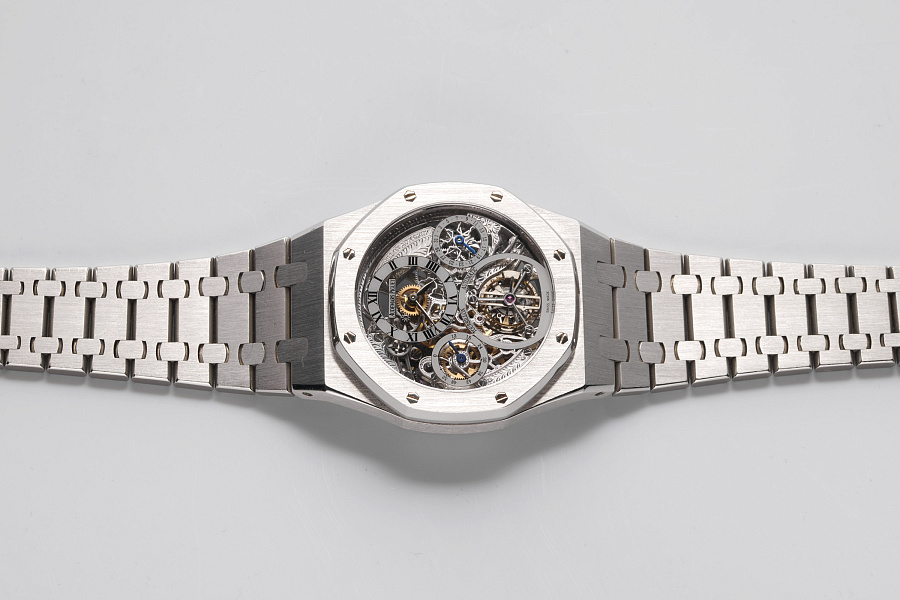 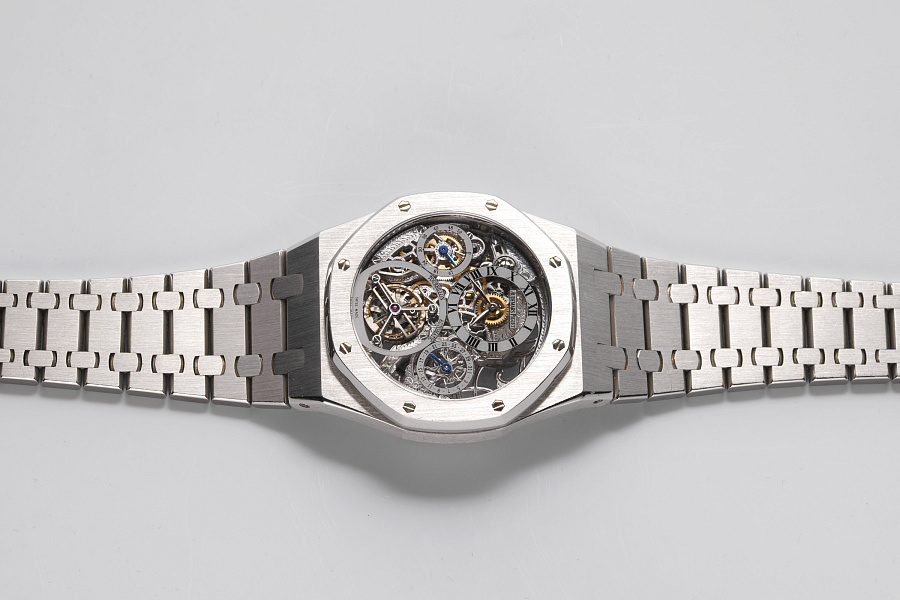 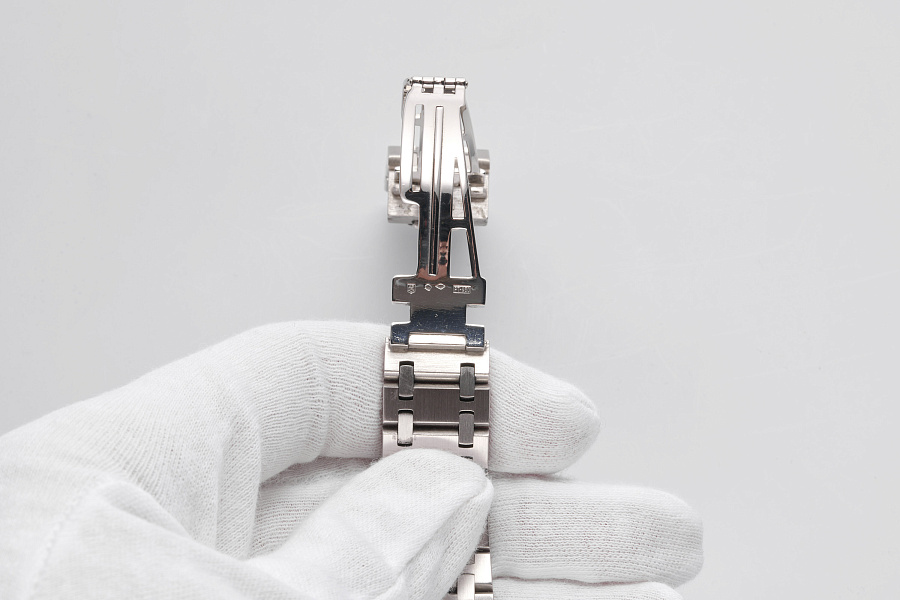 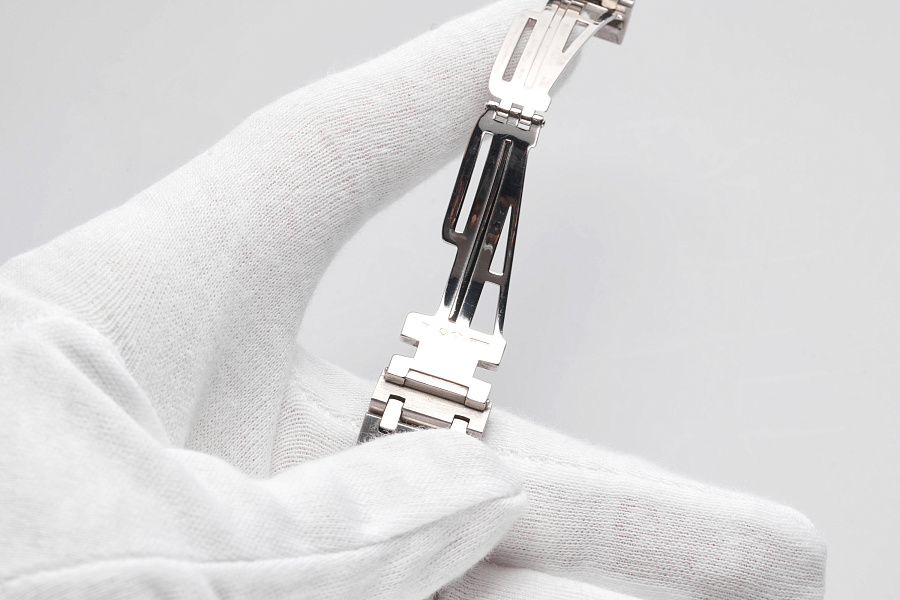 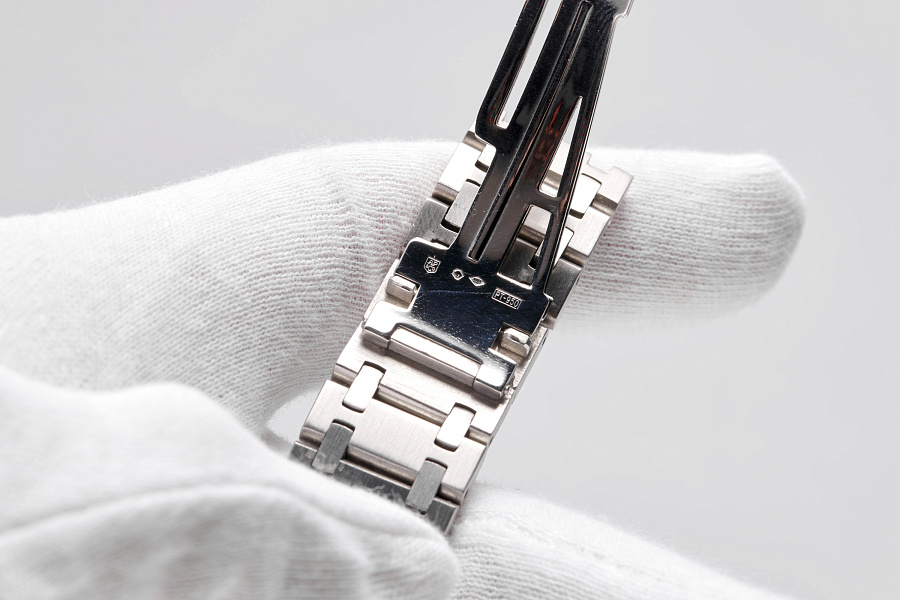 The self-winding caliber 2875, with a bumper winding system, lightweight titanium tourbillon carriage, and rare backwinder feature with the crown set on the caseback, was introduced by Audemars Piguet in 1993 in the world’s first wristwatch combining a tourbillon, automatic winding, and power reserve and date indicators. Caliber 2875 was built on the principles of the caliber 2870, the world-first wristwatch automatic tourbillon movement of serial production, the thinnest tourbillon movement of that time and still one of the thinnest in the industry, launched by Audemars Piguet in 1986. This includes the placement of the crown on the caseback and a hummer-type self-winding system. Compared to caliber 2870, 2875 has an enlarged, and therefore more spectacular, tourbillon, an additional power-reserve indicator and a pointer-type date sub-dial.

Caliber 2875 was first used in classic round-cased models in 1993. It was then introduced into the Royal Oak collection for the first time in 1997 for the 25th anniversary of the Royal Oak, when the brand launched the commemorative Ref. 25831. The Royal Oak 25831 was the first Royal Oak to feature a tourbillon, as well as being the first without a crown. Audemars Piguet produced Ref. 25831 in very limited quantities – 25 pieces in stainless steel, 5 pieces in 18k yellow gold, while in platinum 950 there were 5 pieces with a blue dial and 5 pieces with a salmon dial. Reportedly there was a unique piece in 18k rose and white gold created specifically for the Sultan of Brunei.

An utterly rare and hardly ever seen complicated mechanical timepiece from a world-famous traditional watch brand, a true must-have for the Royal Oak collector

Following that, in 1999, Audemars Piguet introduced the Royal Oak reference 25902, fitted with caliber 2875SQ, which became the first openworked self-winding Royal Oak tourbillon. Available were platinum Ref. 25902 (the present example), believed to be issued as a limited edition of 10 pieces, and a 18k rose gold model. One example of the latter surfaced at a Phillips auction (we have no information concerning its production limitation).

The present example is indeed an exceptional limited-edition watch, the latest Royal Oak with self-winding caliber 2875 and the latest Royal Oak without a crown, which is hidden on the caseback. This seemingly insignificant technical detail gives the present Royal Oak a unique sense of streamlining, allowing the perfect balance and symmetry of the dial to continue to the case as well. The rarity of the present example is further strengthened by the extraordinary execution of its caliber. This is a manifestation of the value of manual labour and the perfection of decor and finish, for which the venerable Audemars Piguet manufactory is famous. The transparent dial and sapphire caseback provide an opportunity to recognise the true watchmaking artistry displayed in the execution of the caliber. The elaborately chiselled, polished and engraved mainplate and bridges are adorned with floral and leaf scroll motifs, and the top of the mainplate is open-worked with the Audemars Piguet ‘AP’ monogram seamlessly embedded into the design.

The Royal Oak Tourbillon Automatic Ref. 25902PT.OO.1110PT.01, a limited-edition tourbillon wristwatch in platinum 950, has, according to the information we have, never come up for auction. It therefore would be an excellent chance for the collector to obtain an utterly rare and hardly ever seen complicated mechanical timepiece from a world-famous traditional watch brand, a true must-have for the Royal Oak collector. The appeal of this lot is greatly enhanced by the fact that the automatic tourbillon caliber 2875 was rarely used in the Audemars Piguet collection, with it now having been discontinued, while the artistic skeleton execution appears only in this reference, which was introduced just once, in 1999.