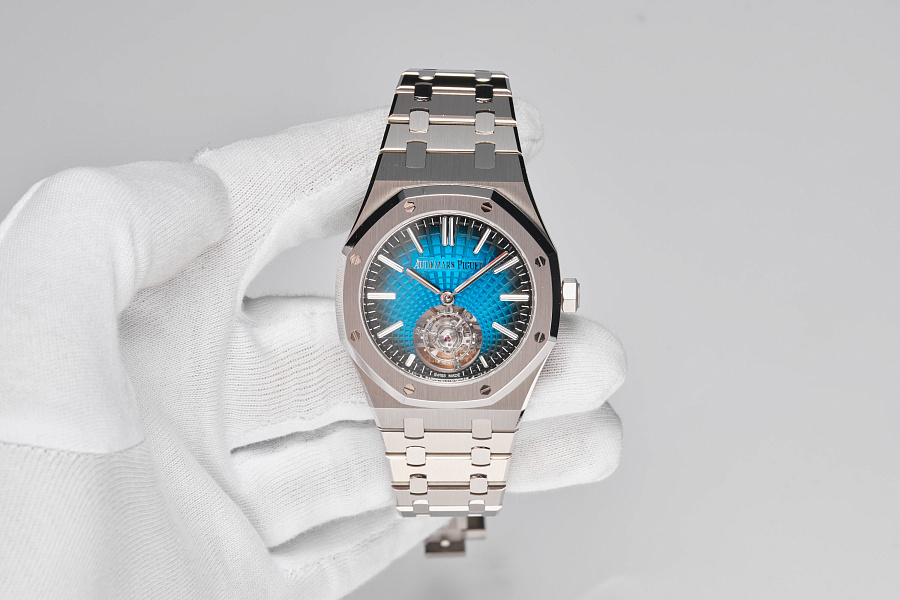 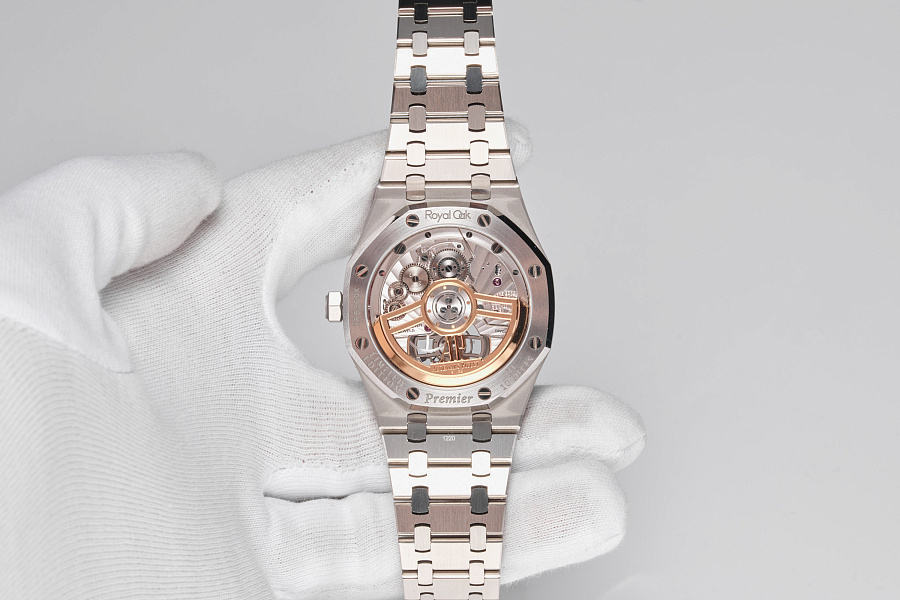 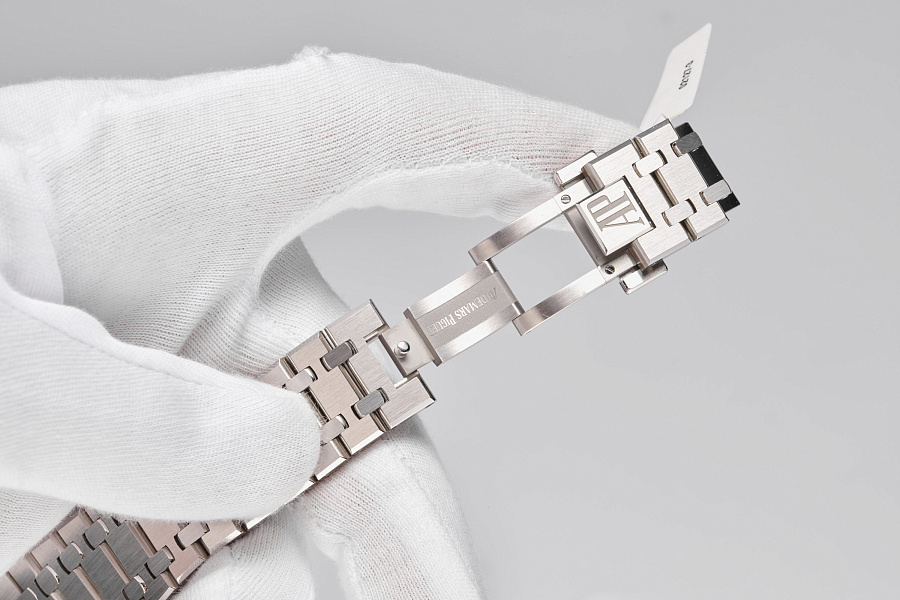 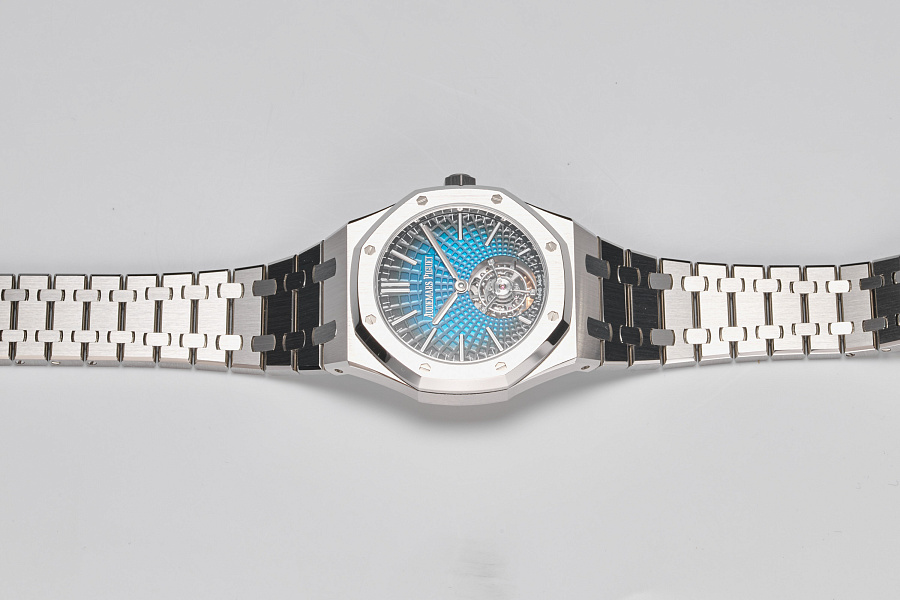 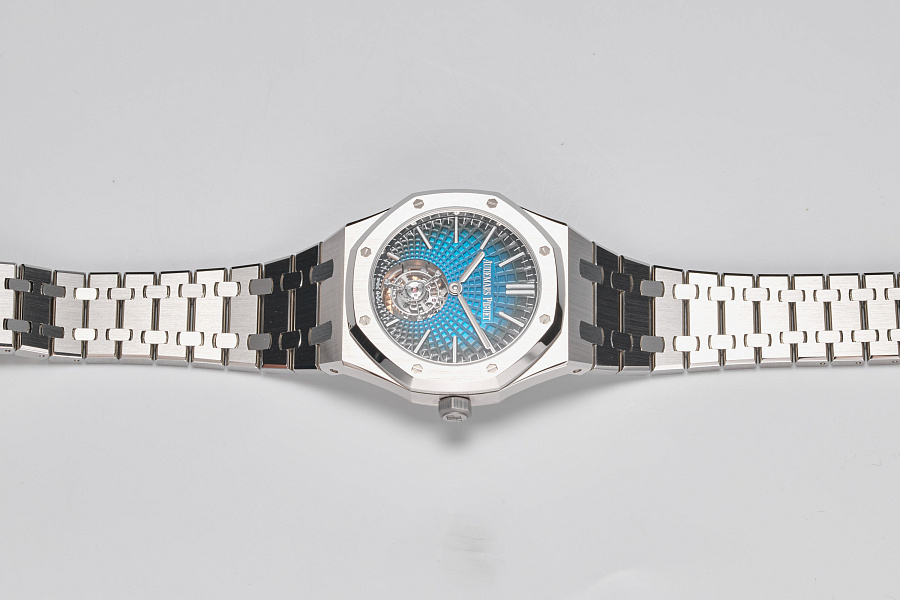 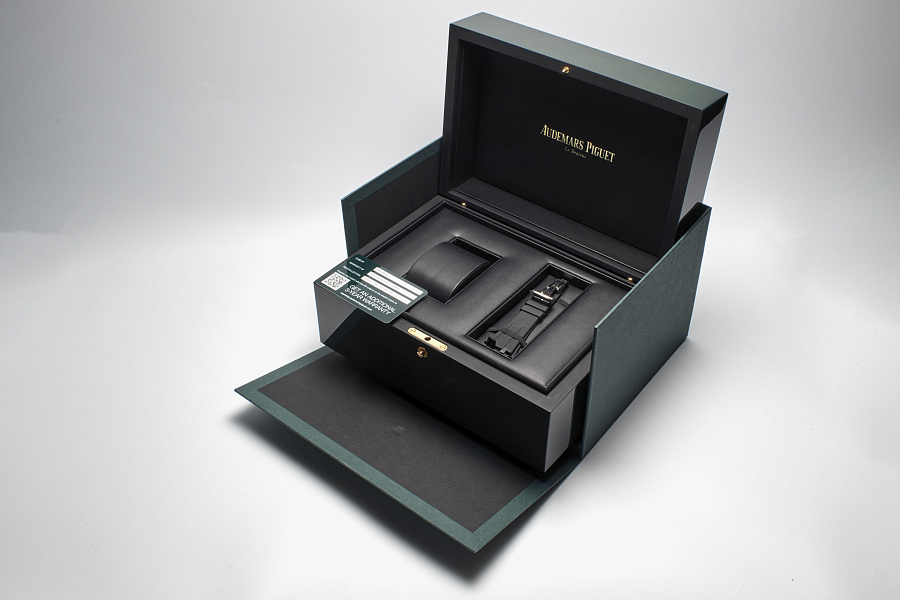 The tourbillon, a beautiful symbol of mechanical complication in modern fine watchmaking art, first appeared in an Audemars Piguet Royal Oak watch in 1997, when the brand celebrated the 25th anniversary of the Royal Oak by launching the commemorative Ref. 25831. The self-winding caliber 2875, with a bumper winding system, lightweight titanium tourbillon carriage, and rare backwinder feature with the crown set on the caseback, was introduced by Audemars Piguet in 1993 in the world’s first wristwatch combining a tourbillon, automatic winding, and power reserve and date indicator. This was then used in Ref. 25831.

The present lot features caliber 2950, newly developed in 2019 for the Code 11.59 Selfwinding Flying Tourbillon Ref. 26396 watch. This caliber allowed the brand in 2020 to return the self-winding tourbillon to the Royal Oak collection, releasing many versions at once including stainless steel, rose gold, titanium and platinum. At present, two Royal Oak Selfwinding Flying Tourbillon models feature a traditional ‘tapiserrie’ dial execution. The brand offers two titanium models with a flat textured dial, while the remaining models feature a fresh dial design with an embossed ‘Evolutive tapiserrie’ decor, a modern take on the classic ‘tapiserrie’ pattern with diverging rays and a focal point in the centre of the tourbillon. This was introduced on the hand-wound Royal Oak tourbillon models in 2018.

The Royal Oak Selfwinding Flying Tourbillon Premier Limited Edition, released in 2021, differs from all other Ref. 26530 and its clone models not only by belonging to an extremely small limited edition, which makes this model rare, but also by the execution of its dial. Especially for this limited edition, the brand gave the dial a unique coloration, which, according to our knowledge, had never been used by the brand in the Royal Oak collection before, certainly adding to the appeal of this lot. The standard ‘Evolutive tapiserrie’ embossed finish is complemented with a distinct gradient smoked effect, with a darker periphery than the centre of the dial, and a unique base tone that we can describe as moonstone-blue.

Another unusual and notable feature of the present watch is the applied Audemars Piguet logo, crafted from 24k gold using LIGA precision galvanic growth technology. It was first used in the Royal Oak watch in 2020 in Ref. 26530.

Caliber 2950, an Audemars Piguet in-house movement, is entirely decorated according to haute horlogerie standards, using traditional techniques including a Cotes de Geneve striped finish, circular and radial brushing, straight grinding, shafts polishing, and the traditional bevelling of the mainplate, bridges and open-worked oscillating weight with meticulous handwork shaping and polishing of the inner exterior and interior angles during bevelling. This is an extremely costly operation for a watch brand, where a lot of time and effort is required even without taking into account that needed in the process of handcrafting, finishing, assembling and adjusting watches.

The Royal Oak Selfwinding Flying Tourbillon Premier Limited Edition Ref. 26530ST is an extremely attractive chance for the discerning collector to purchase a super rare, charismatic and desirable Royal Oak tourbillon watch with extraordinary moonstone-blue dial colouring, produced by a world-famous traditional watch brand, one of the undisputed leaders in the haute horlogerie watch market. Due to its limited release the present lot acquires the status of the rarest collectible, which has good potential for future growth. The combination of impeccable technical workmanship, and exquisite finishing of the case, bracelet, caliber and the dial, characteristic of the brand’s watches, makes the present lot even more attractive, meaning it appears to be one of the most significant and attractive lots offered at the present sale of Ineichen auction house.