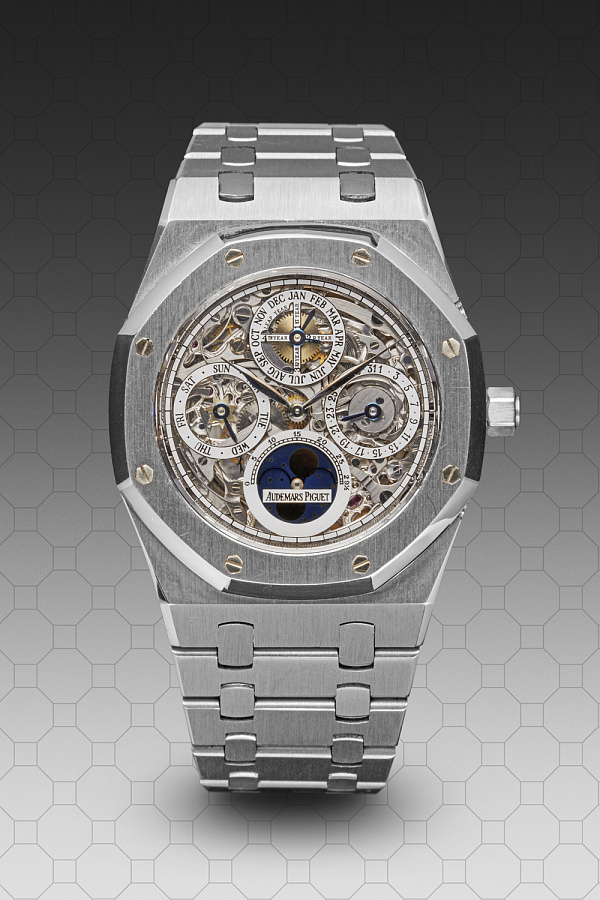 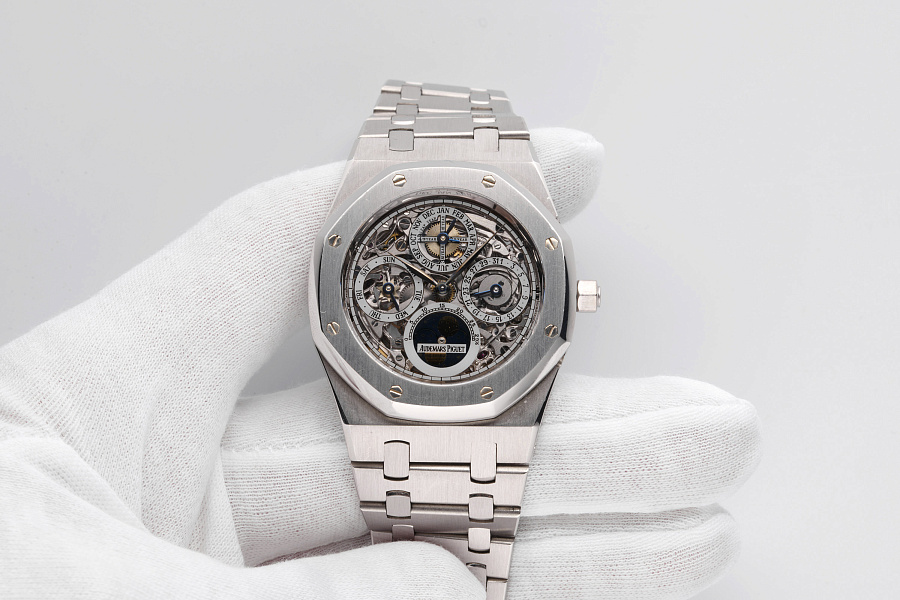 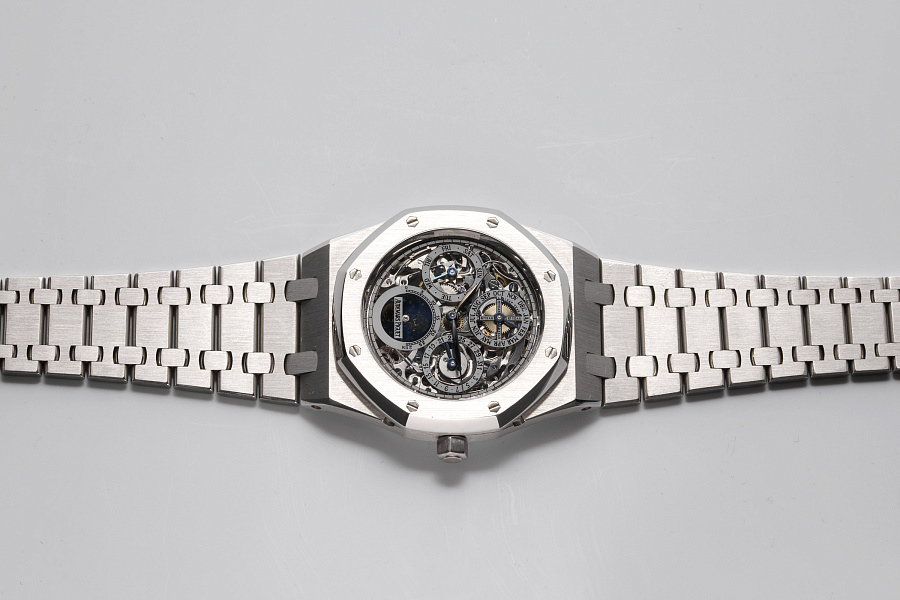 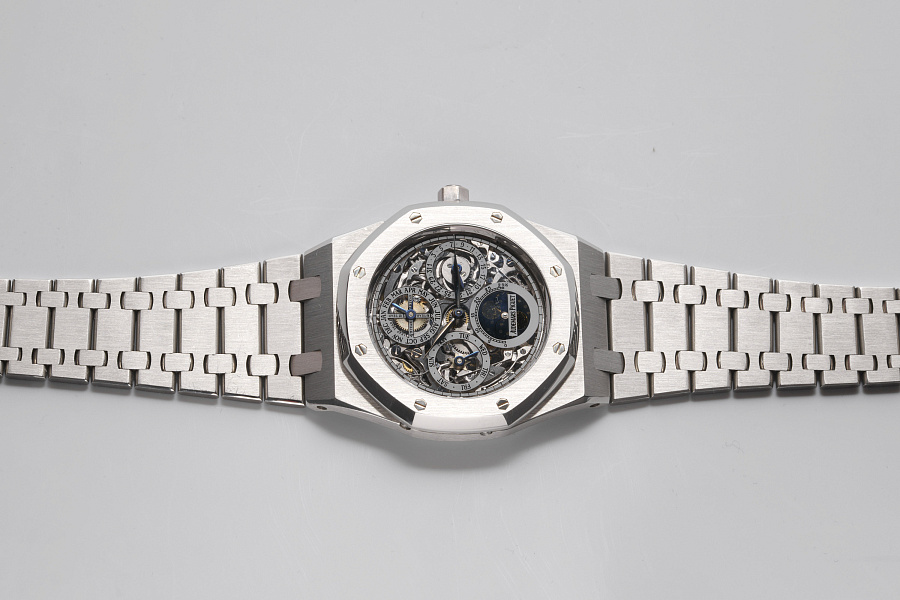 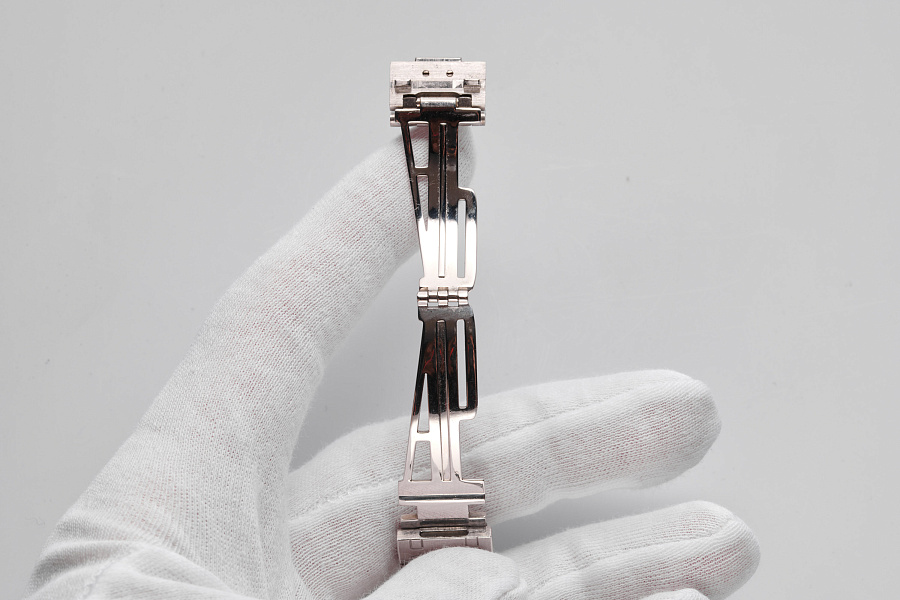 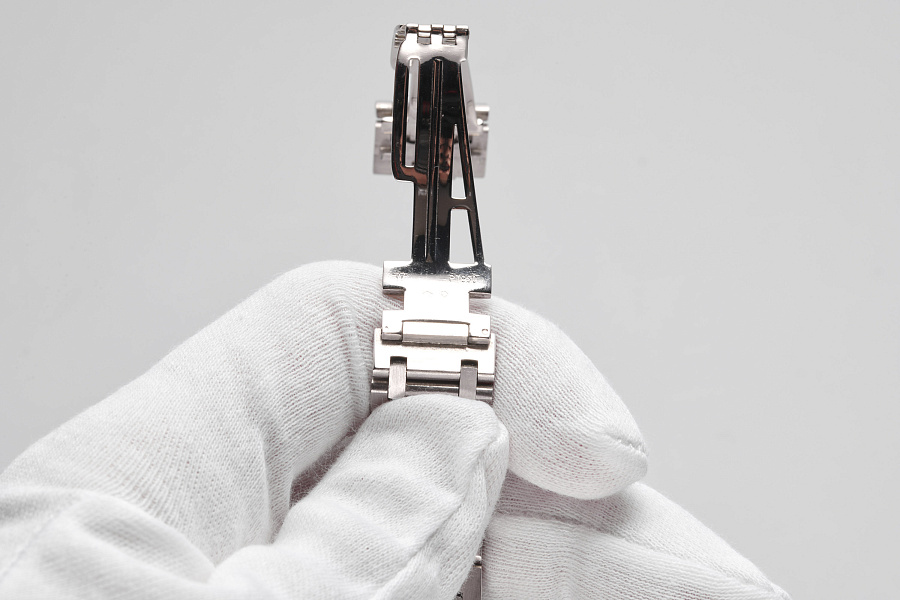 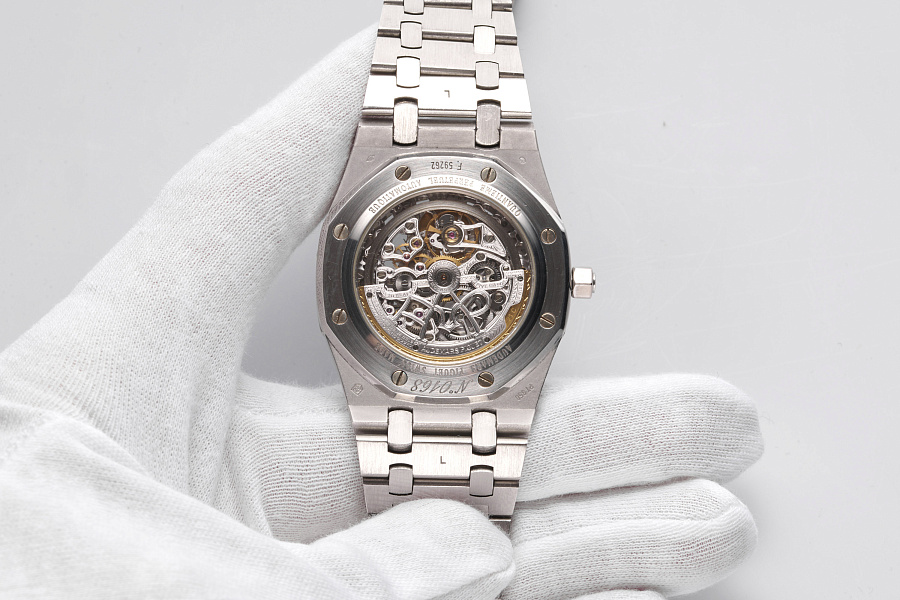 Audemars Piguet launched the present reference in the mid-1990s, most probably in 1997, as a replacement for the previous Royal Oak Perpetual Calendar open-worked reference 25636. The 25829 differs demonstratively from previous 25636 models by the presence of a leap year indicator, which is made in the form of an additional small hand on the month counter at 12 o’clock. The serial-production reference 25829 exists in stainless steel; platinum (as the present reference); yellow gold; pink gold; three models combining tantalum and platinum, pink gold or yellow gold; and as a limited series of 25 pieces in stainless steel and platinum. The present platinum Ref. 25829PT features an ultra-exclusive and extremely rare full-platinum execution with platinum case, bezel and bracelet. It was succeeded in 2015 by the latest generation of 41mm perpetual calendars, featuring a number of the week indication via a special pointed hand.

The present example is powered by caliber 2120/2802 in an open-worked version of the 2120/2802SQ. The small thickness of the movement made it possible to produce remarkably thin and elegant watches, which is especially significant given the complexity of the function of the perpetual calendar itself. With a thickness of 3.95mm, it remained the thinnest perpetual calendar movement with a central rotor of an automatic winding system until 2018. The basic automatic movement is based on a movement-blank supplied by Jaeger-LeCoultre, while the calendar module is based on a kit from the Dubois Dépraz factory. Both are long-term partners and suppliers of Audemars Piguet.

The characteristic feature of this design is its transparent dial, through which you can see the details of the complex calendar mechanism with a fine haute horlogerie finish. Of particular interest are the leaf-shaped hour and minute hands in blackened gold, which evidently only appear on the dials of the 25829 models.

Ref. 25829PT comes up for auction extremely rarely and will therefore be a very successful purchase for a collector looking to obtain an attractive, very rare and complicated mechanical watch from a world-famous traditional watch brand, one of the undoubted leaders in the haute horlogerie watch market. It is a classic collector’s item that communicates a certain era in the development of the Royal Oak collection – from 1997 to 2014, when the dial of the perpetual calendar had the classic leap year indicator, but was still without the central hand of the indicator of the week of the year, which is a customary feature of modern models made on the basis of clones of caliber 2120/2800. The collector’s value of this watch is undoubtedly enhanced by the transparent dial with leaf-shaped hands, which is unique to the models of the Royal Oak collection, as well as the ultra-rare, desirable and valuable platinum execution. The combination of impeccable technical workmanship, exquisite craftsmanship of the partially skeletonized and hand-engraved movement, unique design features and rarity makes this model one of the most attractive lots at Ineichen auction house today.