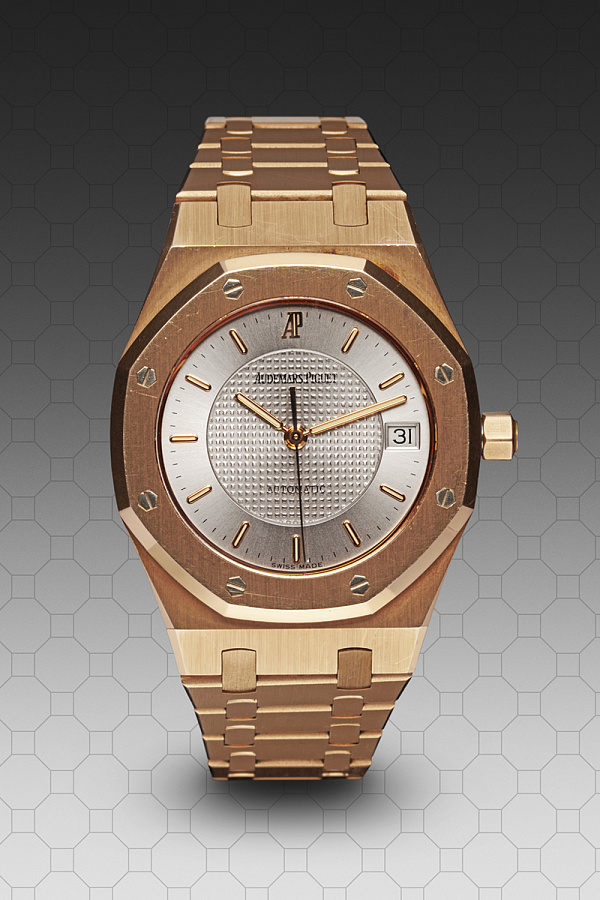 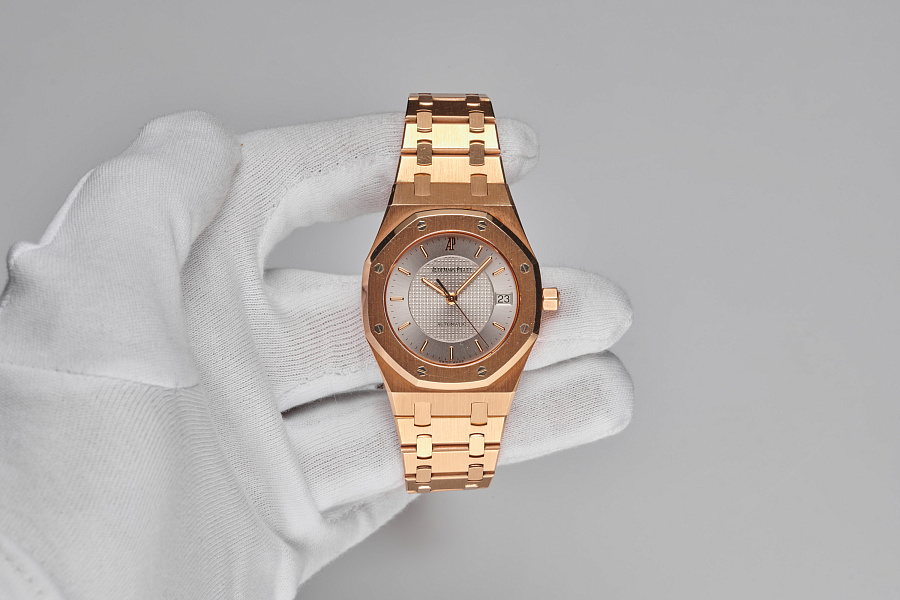 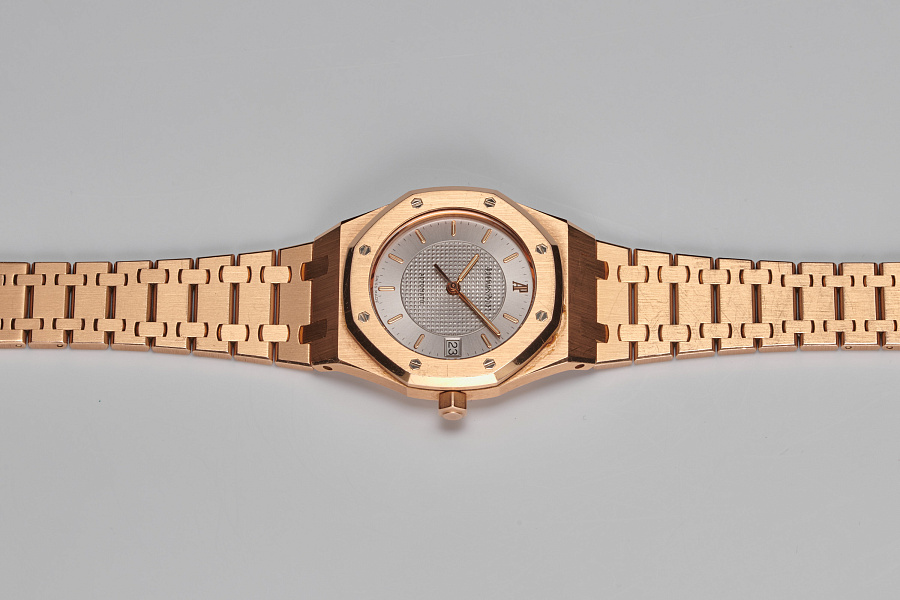 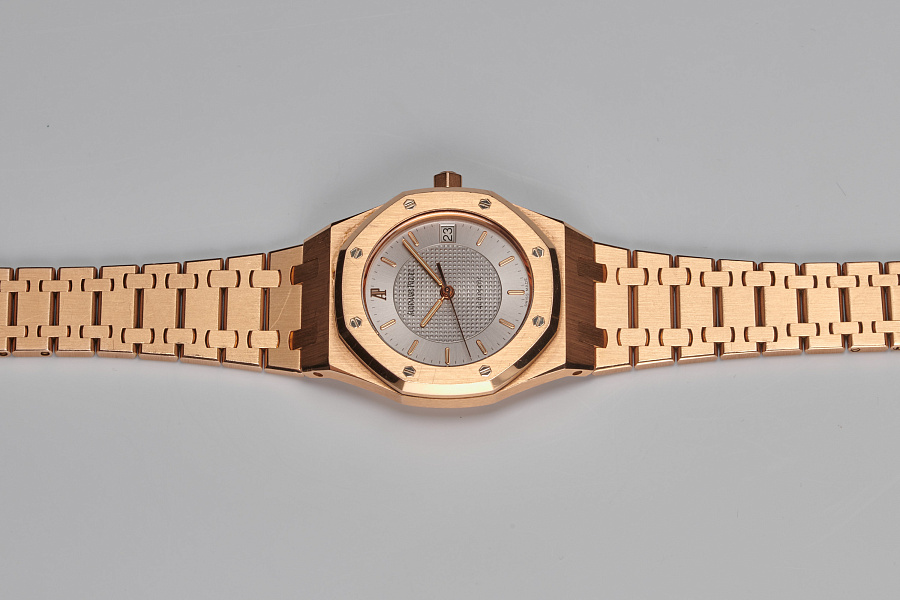 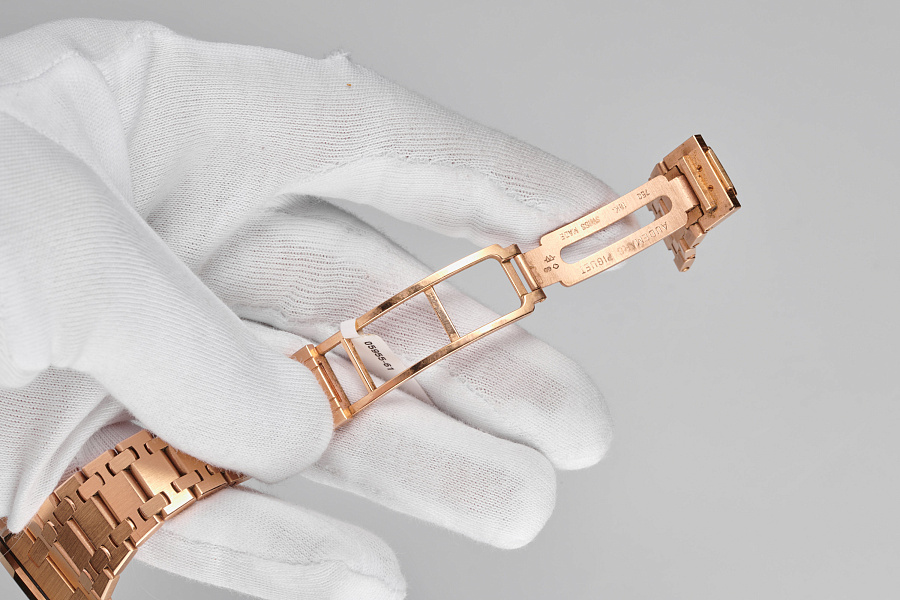 Three commemorative limited editions, issued by Audemars Piguet in a collaboration with and as a tribute to great golf player Nick Faldo, are notable due to their unique dial configurations, and other rare features. The present limited-edition reference 15097OR launched in 1997, is the second limited edition, which followed the first series reference 15090ST of 1992 (limited edition of 175 pieces). Then, in 2002, the brand presented the steel and platinum reference 15190SP (limited edition of 500 pieces) with an exhibition caseback (the rare 36mm 2225-caliber Royal Oak with this feature).

The present reference 15097OR is a notable example of a medium-sized Royal Oak, produced as a variation of a basic 14790 reference in full 18k rose gold execution and featuring a unique dial design with the original Gérald Genta Royal Oak rounded baton hands and indexes, and wide flat chapter ring, with sunburst finish. For this reason, the dial with a round central zone and an embossed ‘Tapisserie’ pattern gets what for a Royal Oak watch is an unusual golf ball look, very appropriate for the person to whom the limited edition is dedicated. The watch also features a solid rose gold caseback with a special engraving that does not include the name of the golfer, simply stating only “Limited edition”. It is equipped with the self-winding caliber 2225, based on a caliber 889 movement-blank supplied by Jaeger-LeCoultre, long-term partner and supplier of Audemars Piguet.

The present lot is a notable example of a rare limited-edition medium-sized Royal Oak, with a dial featuring the golf theme.

The present lot is a notable example of a rare limited-edition medium-sized Royal Oak, with a dial featuring a golf theme. Nowadays, due to the incredible popularity of Audemars Piguet Royal Oak watches, medium-sized Royal Oak references are gaining significant interest as collectibles and as investments. Therefore, the Royal Oak Ref. Nick Faldo Limited Edition Ref. 15097OR.OO.0789OR.01 would be an excellent purchase for the collector who desires a very rare, attractive, and notable medium-sized Royal Oak, produced by a world-renowned traditional watch brand, one of the undisputed leaders in the haute horlogerie watch market.