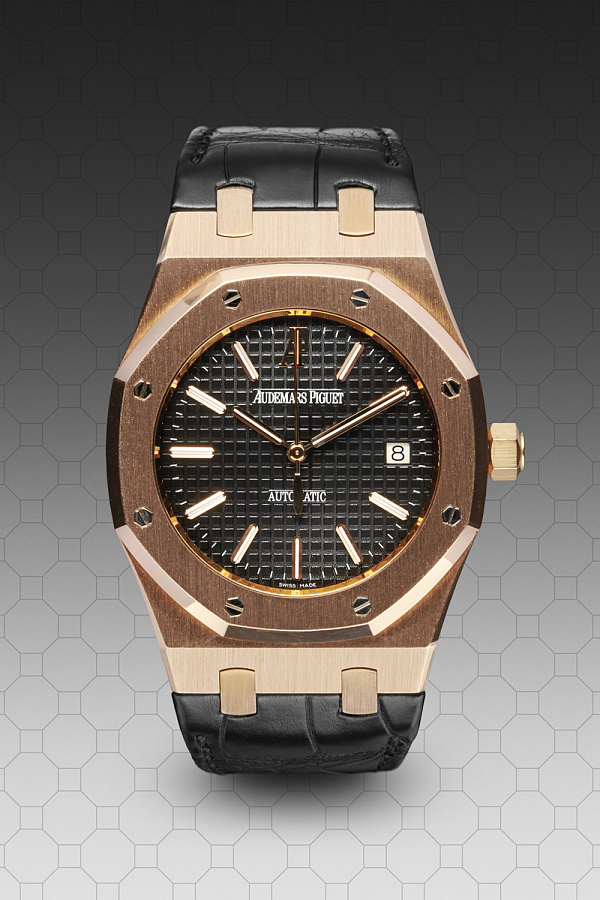 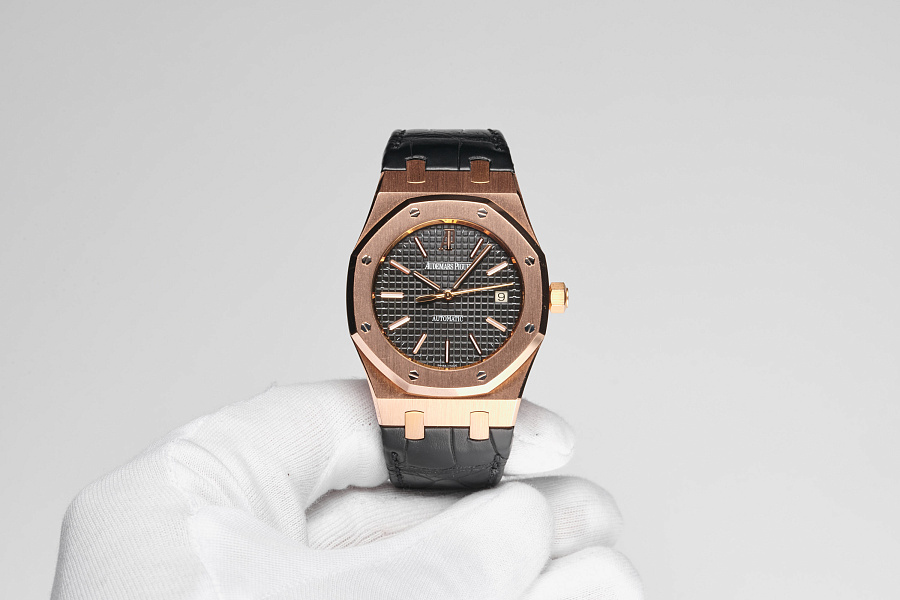 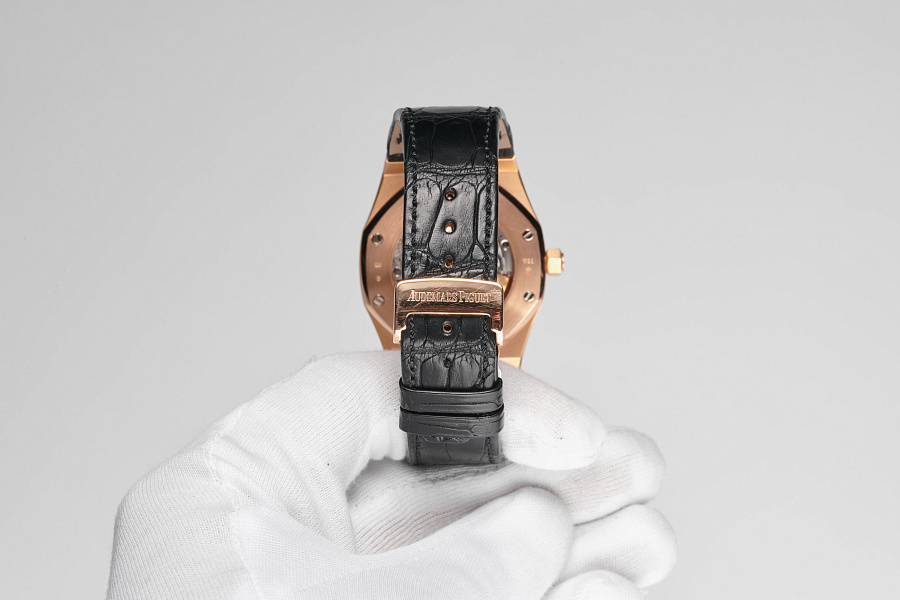 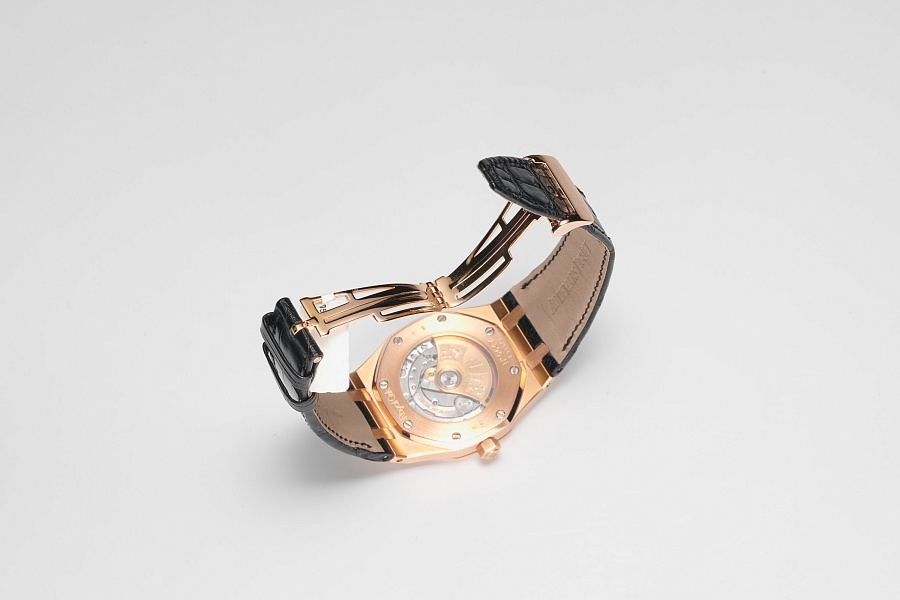 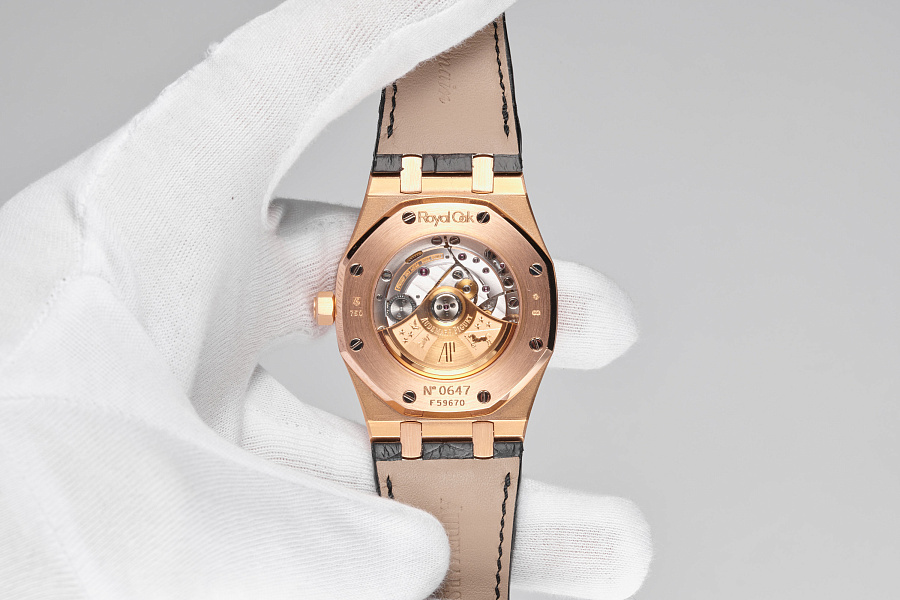 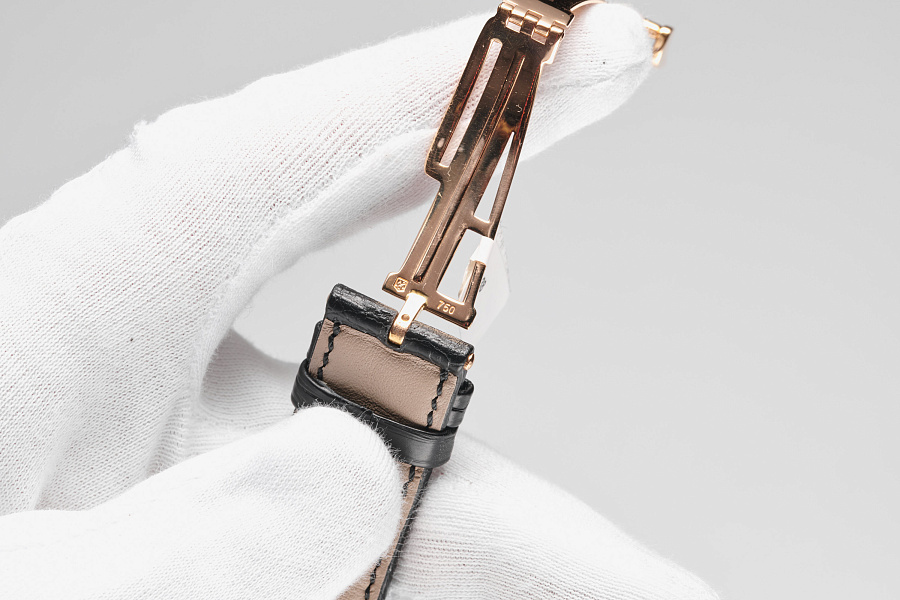 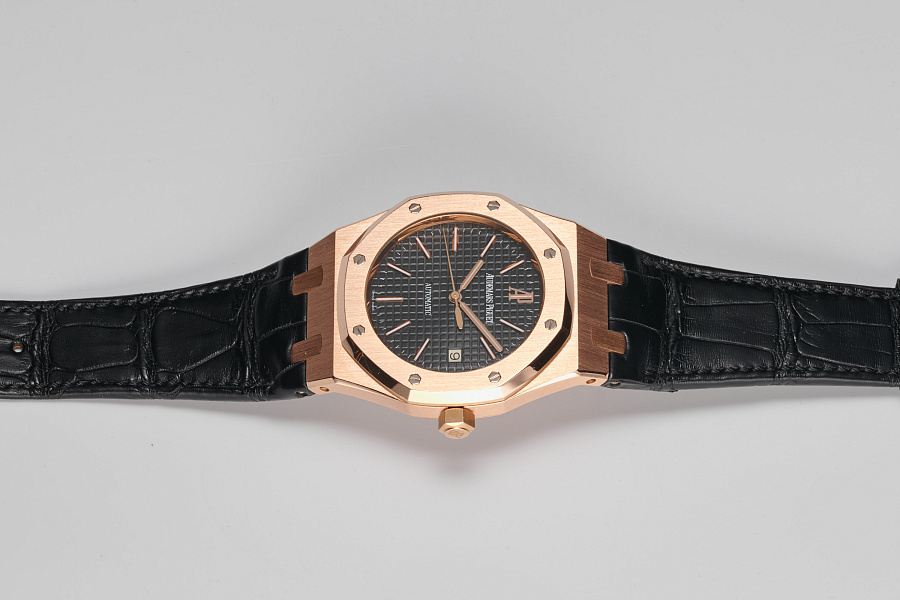 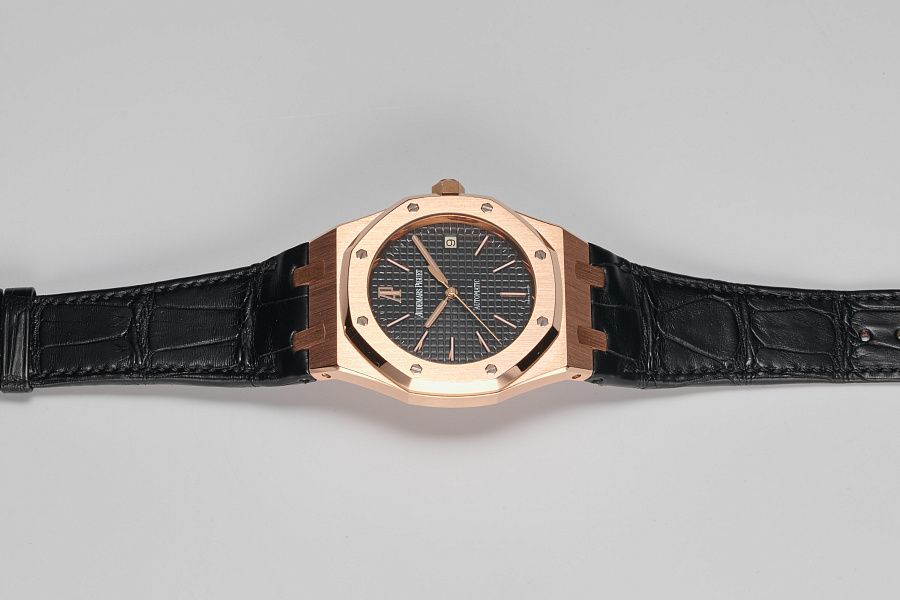 Ref. 15300ST is the first time-and-date Royal Oak with an in-house caliber, and features a transparent exhibition caseback, which gives a chance to catch sight of the now famous 3120, one of the best modern self-winding calibers.

It should be noted that a careful study of the reference 15300 in rose gold, which was produced for 8 years and is now available on the market, reveals very interesting varieties, which may be found in both of its sub-references, with the matt silvered dial (15300OR.OO.D088CR.02), and the black dial (the present lot, 15300OR.OO.D002CR.01), both on a leather strap with Audemars Piguet ‘AP’ double folding clasp (it seems there was no 15300OR on a bracelet produced). They were all about equally popular and produced in similar quantities. Rather than being a single Jumbo-like Royal Oak Self-winding watch, this watch proves to be an appeal to the thoughtful collector who appreciates difference and variety. When collecting the early Royal Oak Self-winding watches, the following variations in design should be considered. Firstly, the inscription “Automatic” on the dial, which has two clearly distinguishable types: one with a narrow ‘U’ (the most common) and one with a wide ‘U’ (rarer, about a quarter of examples). One noteworthy feature of this variety should be emphasized: the narrow U is exactly the same as the U from the Audemars Piguet logo, while the wide U looks noticeably different than in the logo. Secondly, the typeface that the aperture date is printed in: the serif typeface with notches looks very nice but is more common, while the sans serif typeface looks more modest and technical, but is less common. Finally, the last aspect we urge attention to be paid to is the position of the date aperture relative to the square shelfs of the ‘Grande Tapisserie’ relief pattern – the window may be aligned against the squares (which is less common), or nonaligned and shifted closer to the centre of the dial (more common). The information we have does not allow us to correlate these varieties with the watch release time – this could certainly be a subject of exciting research in the future.

The present example features a wide ‘U’, serif date and aligned aperture, this combination certainly increases its collector’s appeal.

Nowadays, due to the incredible popularity of Audemars Piguet Royal Oak watches, Ref. 15300 is seeing a fabulous increase in prices in the previously worn watch market, indicating significant interest in this item as a collectible and as an investment. Therefore, the Royal Oak Self-winding 39mm Ref. 15300OR.OO.D002CR.01 ‘Wide U’ would be an excellent purchase for the collector who desires a very attractive, sporty and rare self-winding wristwatch from a world-renowned traditional watch brand, one of the undisputed leaders in the haute horlogerie watch market. Ref. 15300ST is the first time-and-date Royal Oak with an in-house caliber, and features a transparent exhibition caseback, which gives a chance to catch sight of the now famous 3120, one of the best modern self-winding calibers. The present lot is a rare timepiece of the ‘Wide U’ variety, so we are sure it will attract an enthusiastic collector.