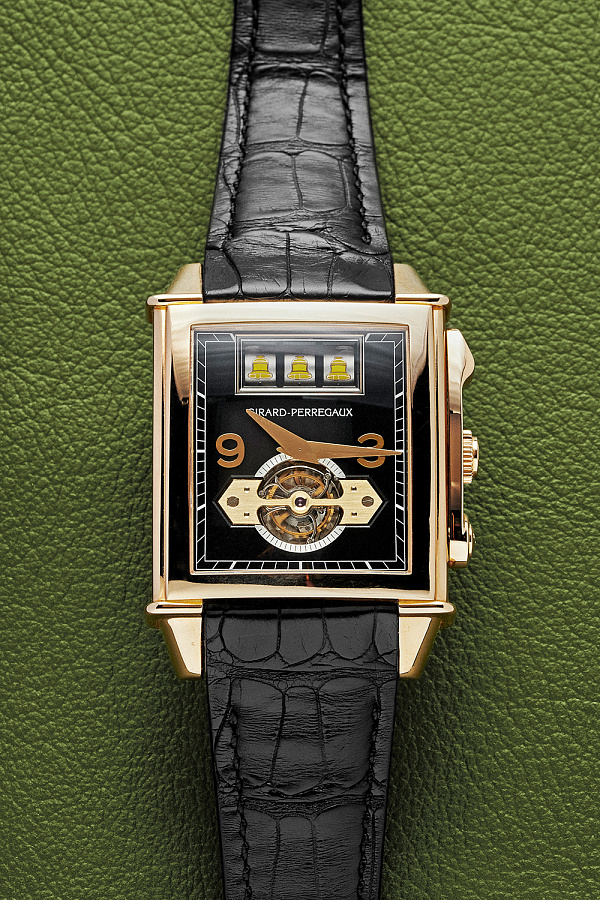 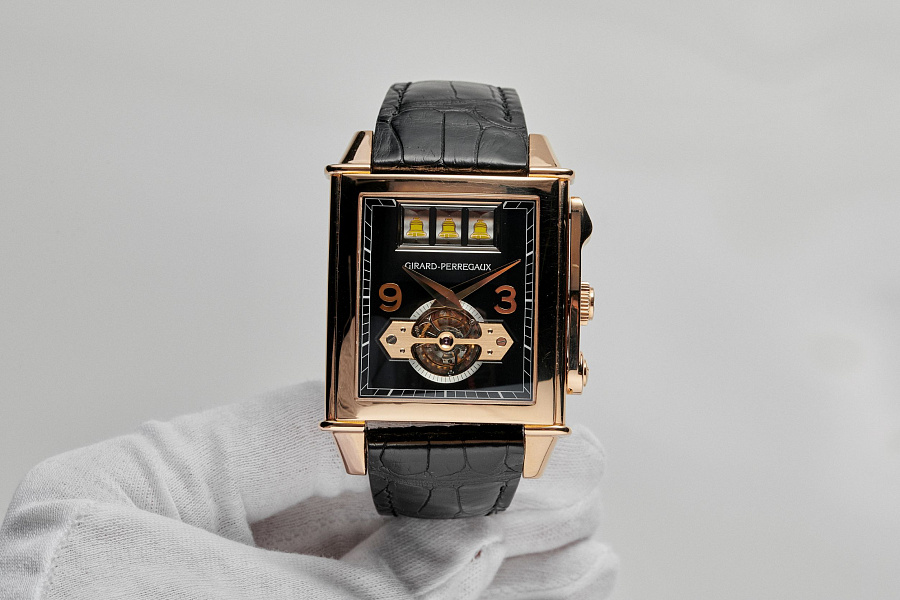 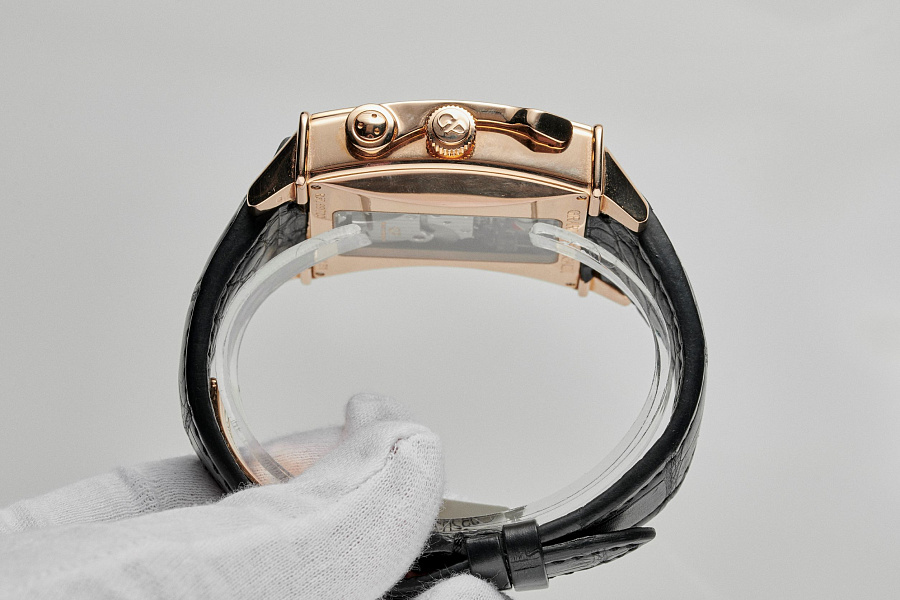 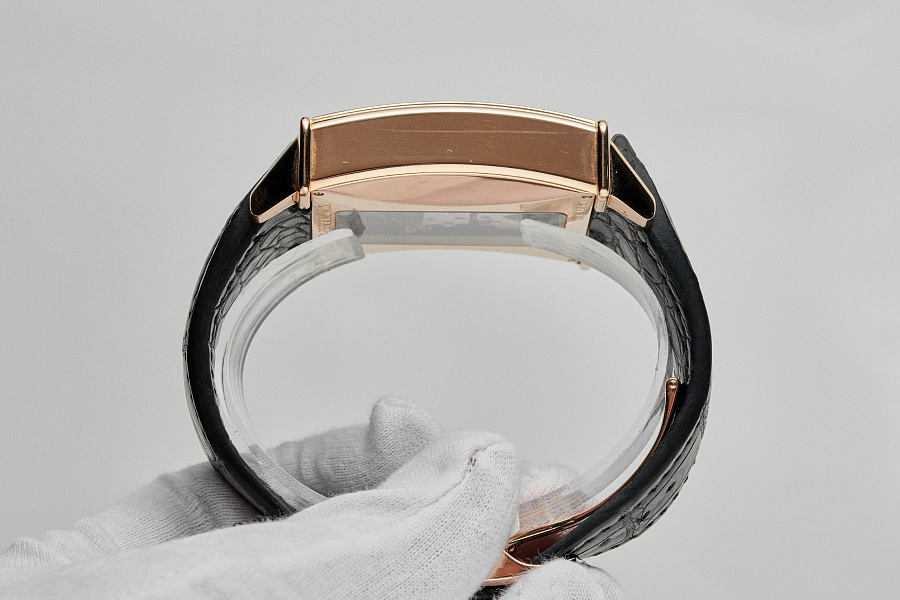 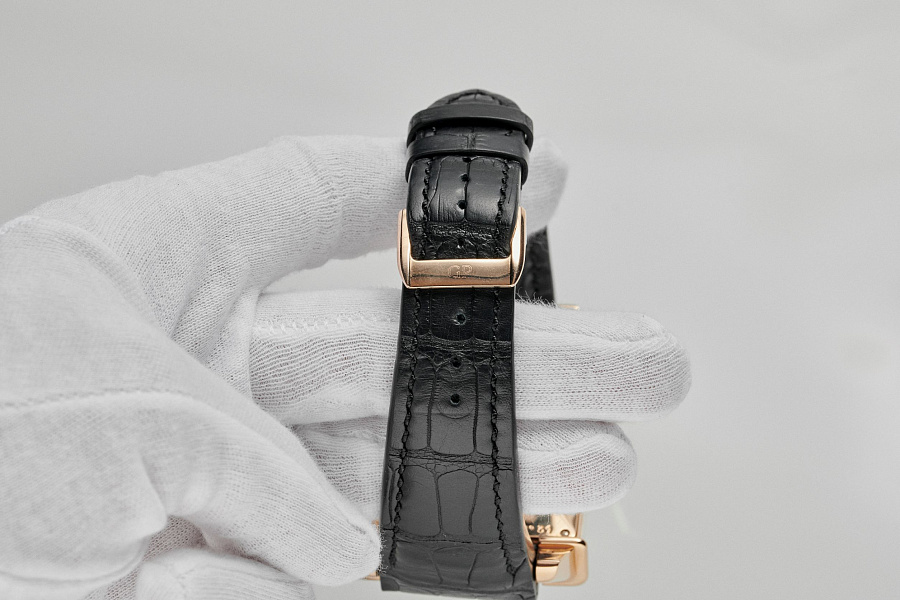 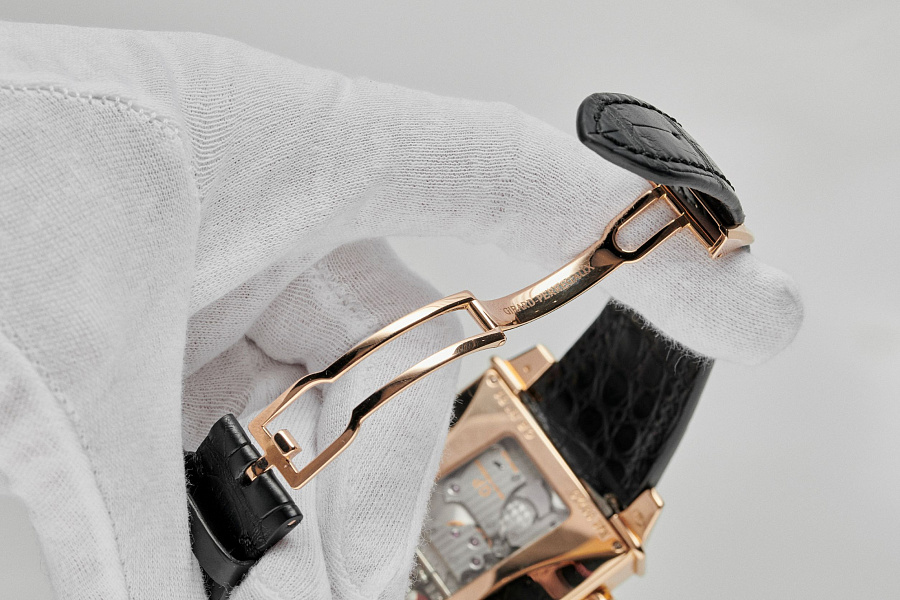 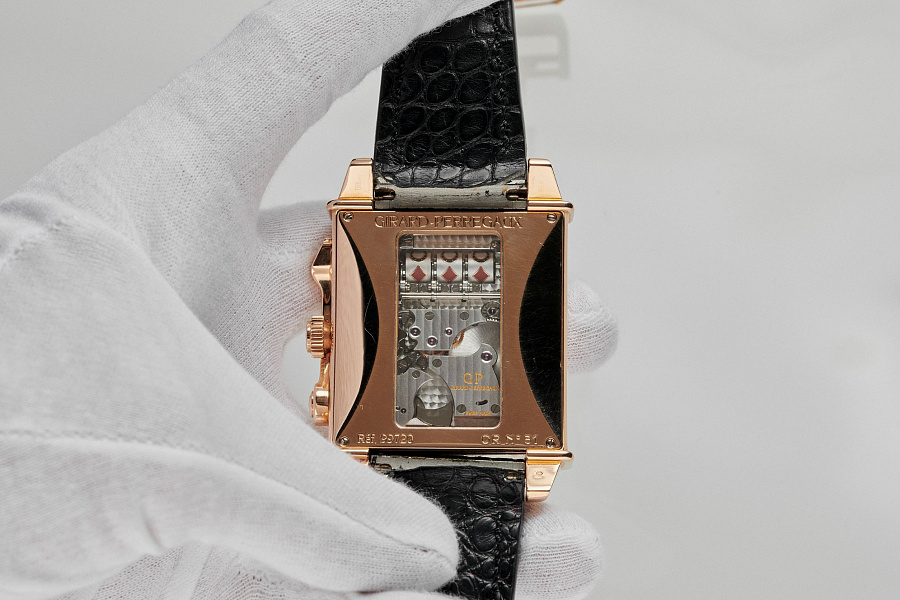 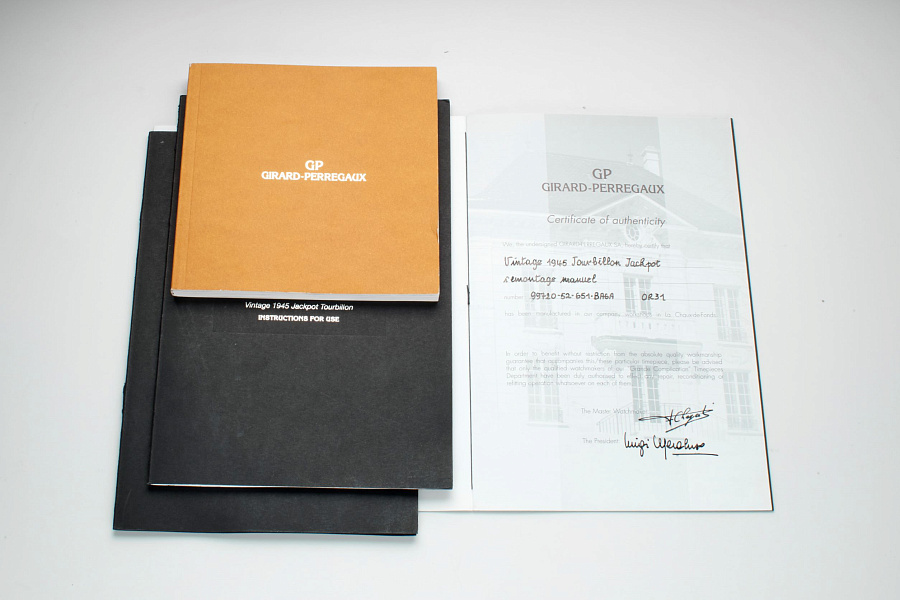 The Vintage 1945 Jackpot Tourbillon is one of the most extraordinary Girard-Perregaux wristwatches ever. The Caliber GPFAY08 of the present watch was developed as a re-creation of Charles Fey’s ‘Liberty Bell’ slot machine (designed in 1898), made in collaboration with Christophe Claret (note that the name of the inventor is incorrectly spelled 'FAY' in the designation of the caliber). The watchmaking atelier founded by Christophe Claret is a supplier of complications, mainly repeaters, tourbillons and sounding mechanisms, as well as being a manufacturer of watches with additional gaming complications. The tourbillon with a golden bridge of characteristic baroque design, which was registered by Girard-Perregaux as far back as 1884, is complemented by a chiming slot machine mechanism. Its three rollers are installed in the aperture at the top of the dial, each with five symbols – a heart, diamond, spade, horseshoe, and liberty bell for the jackpot. When the arm situated on the right side of the case is pulled, the slot machine starts. At the same time, it activates another mechanism, striking on the gong to mark the moments when each of the rollers stop.

The tourbillon with a golden bridge of characteristic baroque design, which was registered by Girard-Perregaux as far back as 1884, is complemented by a chiming slot machine mechanism. Its three rollers are installed in the aperture at the top of the dial, each with five symbols – a heart, diamond, spade, horseshoe, and liberty bell for the jackpot.

Girard-Perregaux announced the release of the Vintage 1945 Jackpot Tourbillon in rose gold with a black dial in 2007. Its production was not limited, but numbered. In 2009, the brand launched a white gold version again with a black dial. Our research shows that the rose gold version seems to be more common than the white gold version, insofar as the highest case number we found among the rose gold examples was 50, with a highest case number of 7 among the white gold ones. However, this is only an argument in favour of the assertion that more rose gold pieces were produced. We also believe that the number of pieces of the Vintage 1945 Jackpot Tourbillon in the end is likely to be no higher than one hundred. This corresponds to the level of complexity of the watch and its high official retail value.

The Girard-Perregaux Vintage 1945 Jackpot Tourbillon Ref. 99720-52-651-BA6A is undoubtedly an attractive collectible item as it is discontinued and features a unique set of complications, as well as high-end workmanship and a noticeable and memorable appearance. Therefore, the present lot would appear to be an extremely attractive purchase for the collector, offering the opportunity to obtain a very rare, extraordinary and playful tourbillon wristwatch with a unique chiming slot machine complication from a world-famous traditional watch brand, one of the undoubted leaders in the haute horlogerie watch market. This watch is an impressive showpiece of Girard-Perregaux craftsmanship, able to create its most famous iconic design in a wristwatch and its movement with a fine tourbillon of traditional haute horlogerie design, top-of-the-range finishing and signature gold bridge – a design which is still without comparison.