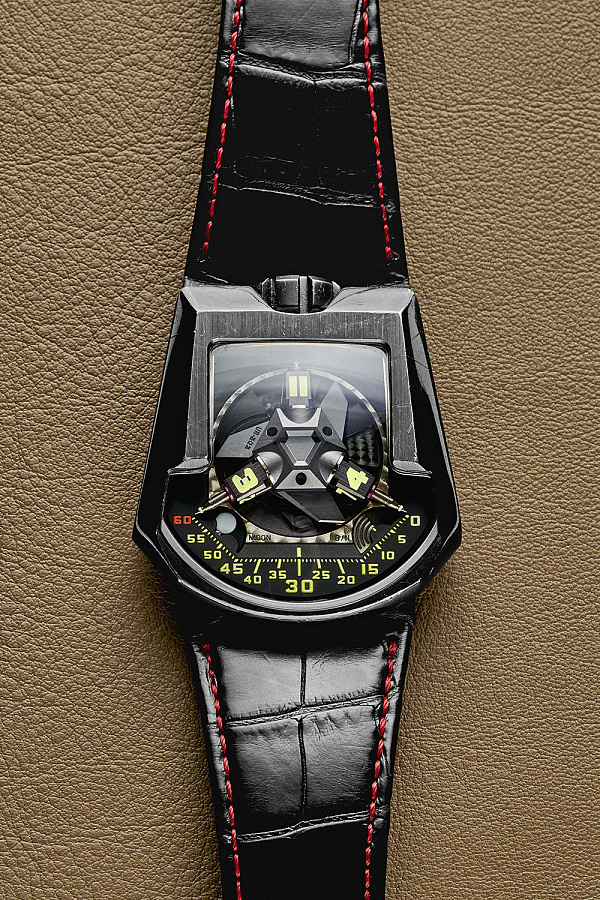 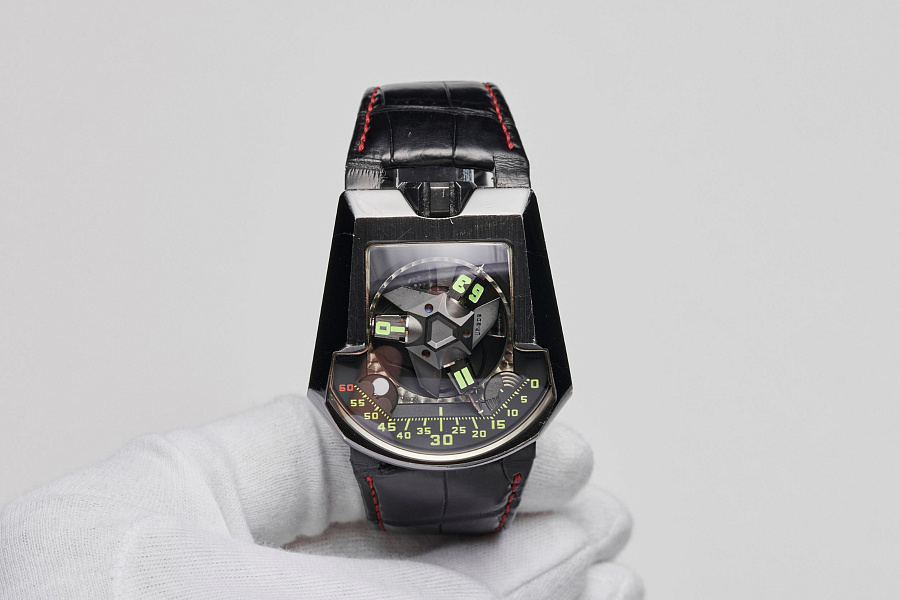 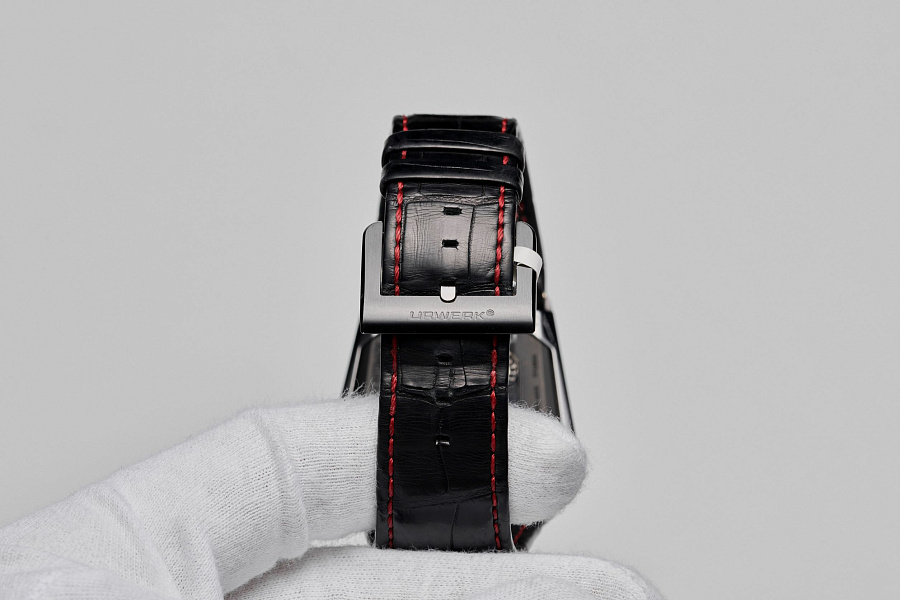 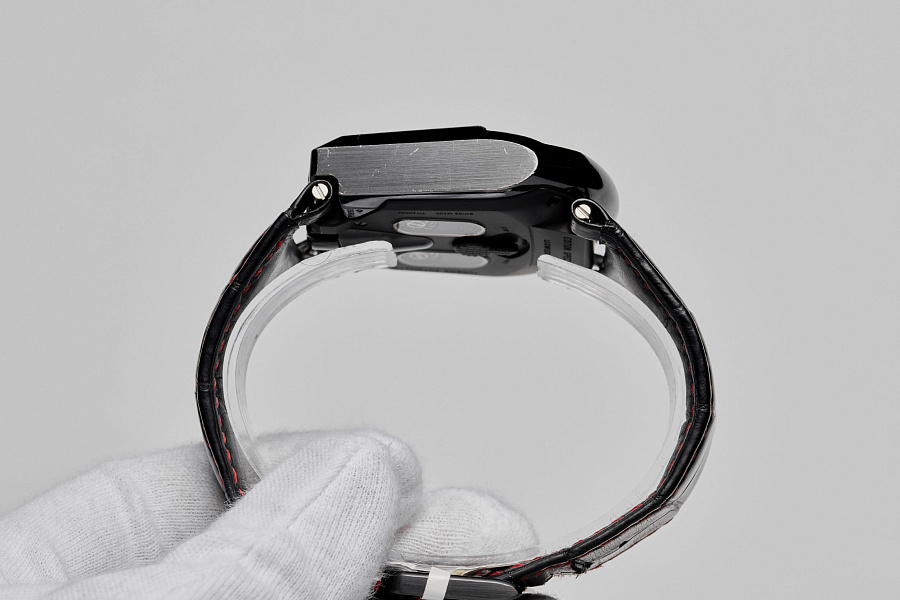 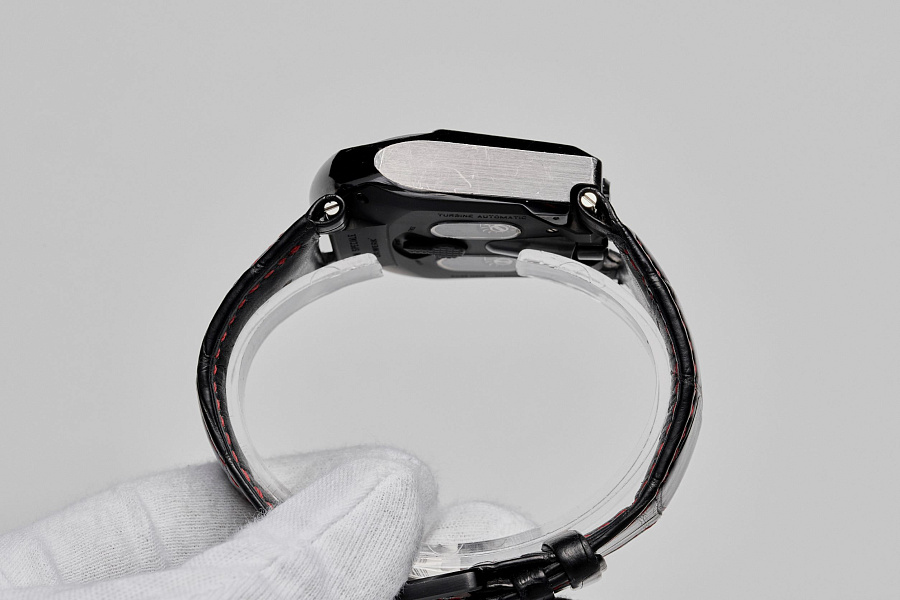 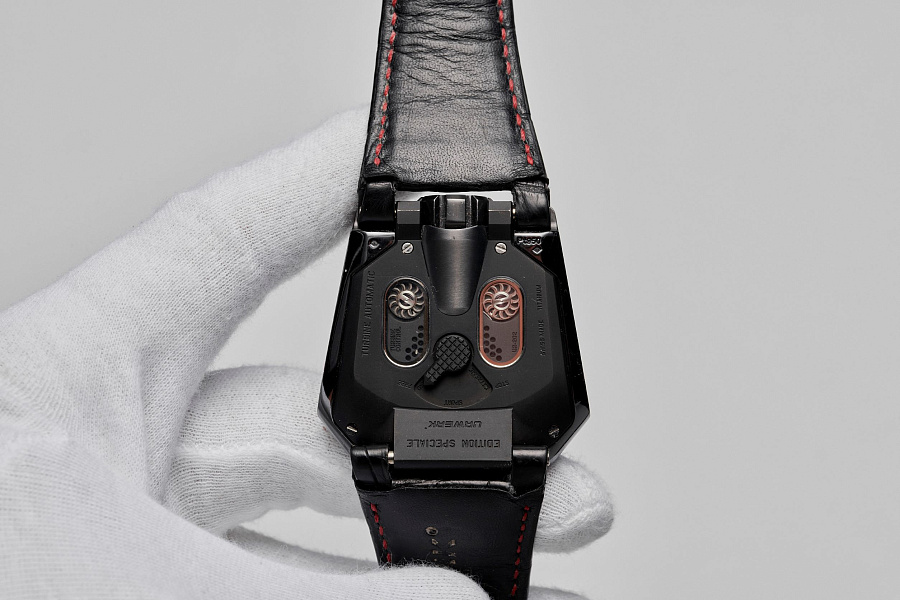 From the very beginning of its activity, Urwerk has developed the design of its wandering hour complication. The inaugural models UR-101 and UR-102, equipped with such a time indicator, were launched in 1997. Development of the UR-103 was carried out over several years, and the first timepieces were presented by the brand in 2003. This watch belongs to the first-generation UR-103.01, which is widely considered the starting point of the brand’s success.

Urwerk UR-202 is one of the most imposing designs of Urwerk, especially in the present all-black execution.

In 2005, Urwerk significantly upgraded the traditional flat satellite display of the UR-101, UR-102 and UR-103 models, complementing it with a 3D action. The brand undertook this development for the special Opus 5 project for the Harry Winston Rare Watches division, created in collaboration with Maximilian Büsser, then director of the division. Opus 5 was very well received by the market, encouraging Urwerk to implement the new complication in the UR-201 watch.  The new display designed for the UR-201, based on the Opus 5, represents an alternative implementation of the same idea. It consists of three cubes, having one hour numeral on each of the four longitudinal sides. The cubes travel alongside the 120-degree minute scale showing the current hour, and at the same time the minute by an expandable telescopic minute hand. It is believed that the basic movement for the caliber 7.01 of the UR-201, supplied by La Joux-Perret as a reworked version of the Eta/Peseux 7001 caliber, was discontinued by this company, and so Urwerk embarked on a search for a new base caliber that could pull the signature wandering hour complication. In fact, it was for the best – Urwerk moved from hand-wound calibers to self-winding ones. As early as 2008, a new model UR-202 Turbine Automatic was introduced, powered by a newly developed self-winding caliber 7.02, based on the Girard-Perregaux GP3000 caliber.

Together with the self-winding feature, caliber 7.02 featured an ingenious aerodynamic brake mechanism with two turbines and air flow regulation, which allowed the watch owner to adjust the efficiency of the self-winding module to the style of their physical activity. The selector has three positions: for ‘extreme’, ‘sport’ and ‘standard’ modes. Aerodynamic regulators were invented at the dawn of watchmaking; however, they were used very rarely in wristwatches, and before this invention, never in a self-winding system. In the UR-202, in addition to adjusting the efficiency of the winding, the aerodynamic regulator also acts as a shock absorber of the self-winding mechanism – in fact, it was invented by ancient clockmakers for this purpose.

The Urwerk UR-202 Turbine Automatic Black Platinum Edition Speciale is an extremely rare watch. The edition was limited to only 10 pieces in blackened platinum, which have surfaced only a few times on the secondary market. Therefore, the present example would appear to be a very attractive purchase for the collector. The Urwerk UR-202 is one of the most imposing designs from Urwerk, especially in the present all-black execution. The charismatic, eye-catching and futuristic design, rare wandering hour display in the updated 3D version, and innovative self-winding caliber featuring aerodynamic regulation will definitely make the present lot an extraordinary daily-wearer.