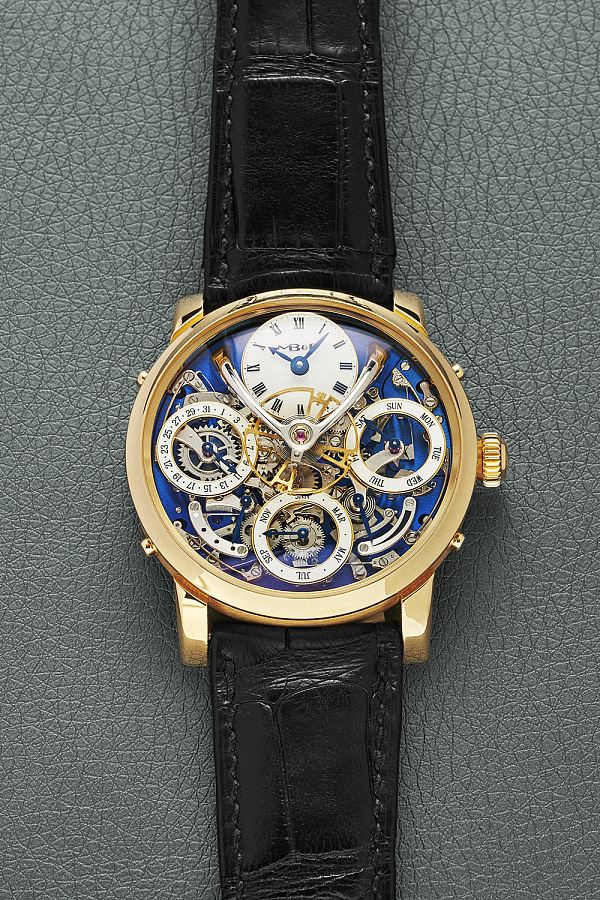 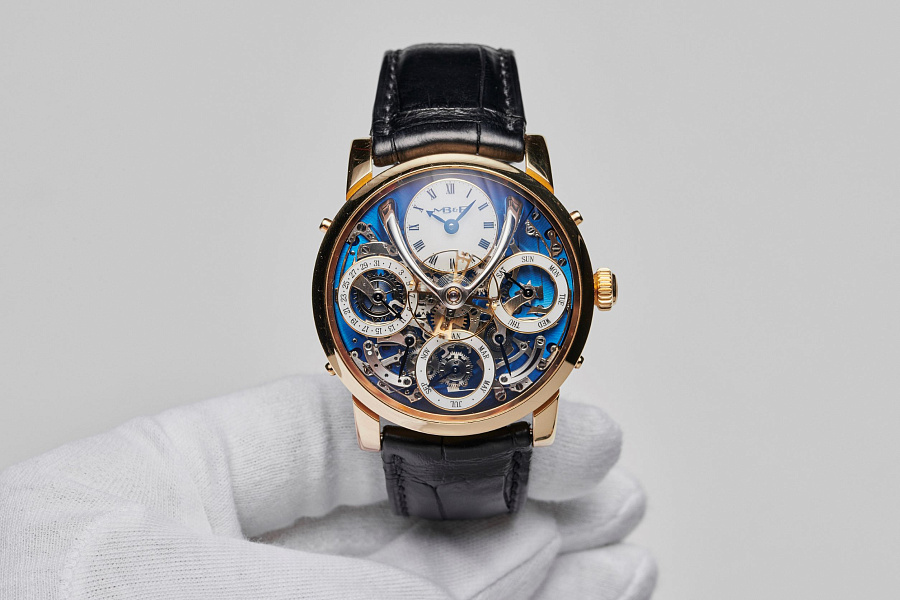 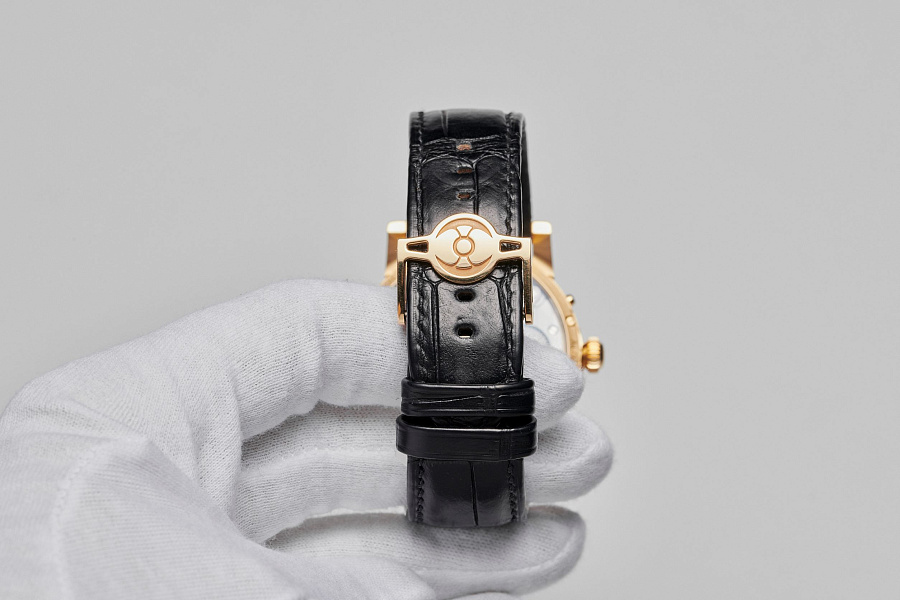 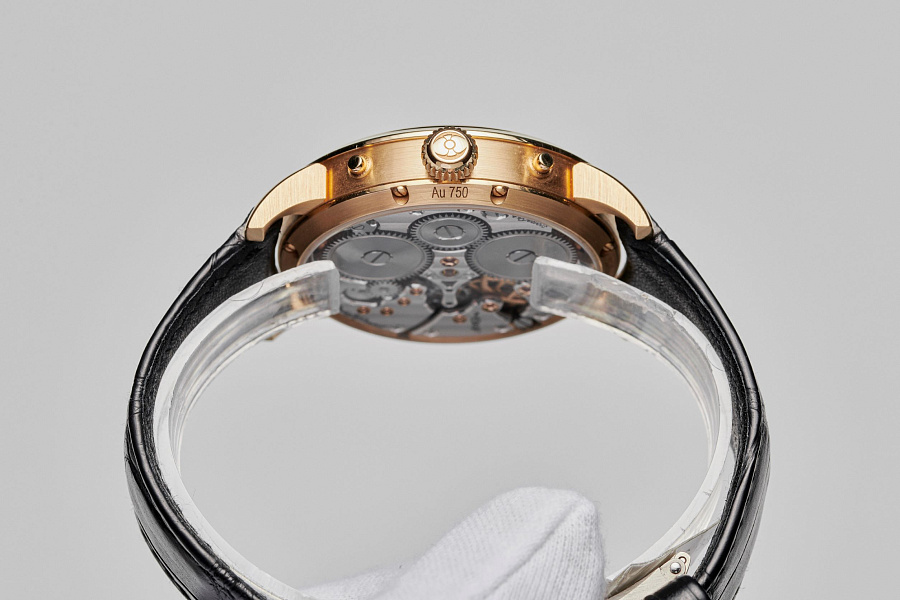 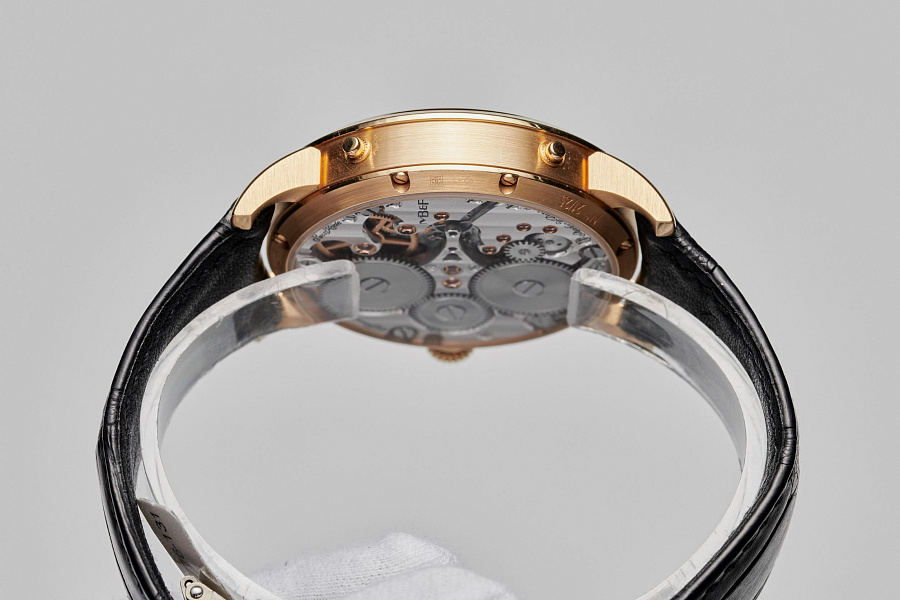 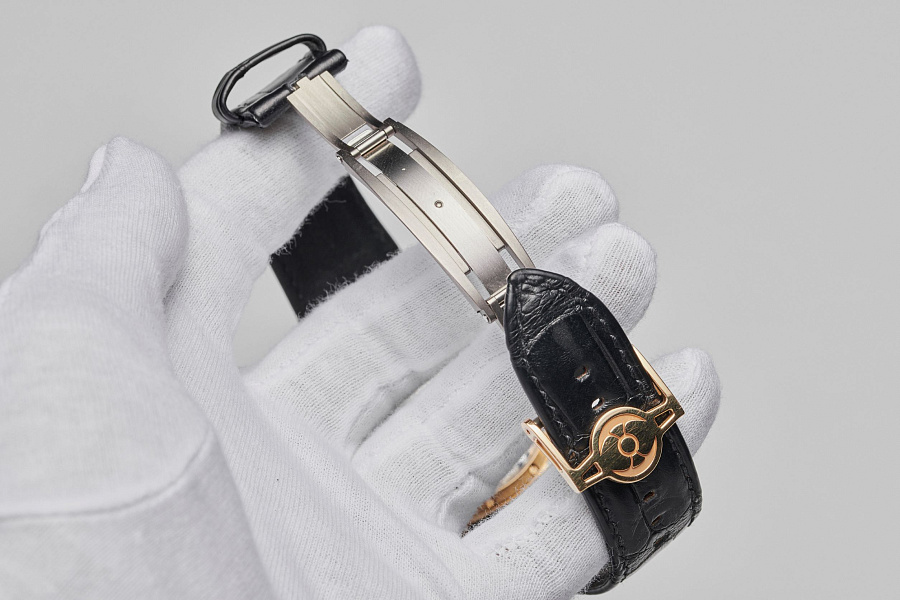 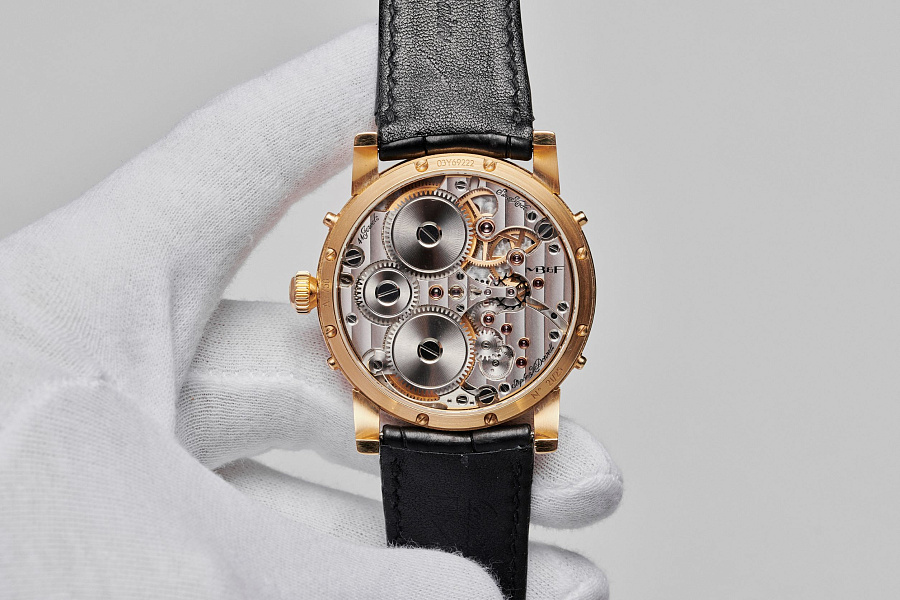 The Legacy Machine Perpetual, launched in 2015, is based on a new type of perpetual calendar developed by Northern Irish watchmaker and movement designer Stephen McDonnell. Unlike the traditional perpetual calendar, which calculates the lengths of the months based on the length of the longest months – 31 days – in McDonnell’s perpetual calendar, the length of the shortest month of 28 days is taken as the base duration. The change in concept was intended to make the calendar a little simpler, including a leap year corrector not found in traditional perpetual calendars. Nevertheless, the system of protecting the calendar device from breakage, built into the mechanism by McDonnell and important when trying to make a correction just as pointers switch, led to a serious complication of the mechanism as a whole. Typically, a perpetual calendar caliber has about 200 parts (for example, Patek Philippe’s caliber 240 Q, one of the best in this category, has 275 parts), while McDonnell’s perpetual calendar is assembled with 581 components. This is not only evidence of the great complexity of the mechanism, but also the reason for the high cost of Legacy Machine Perpetual watches and their focus primarily on an extremely narrow audience of collectors and connoisseurs of fine watchmaking. For the same reason, the release of almost all versions of the Legacy Machine Perpetual is limited.

The design of the Legacy Machine Perpetual is a continuation of the style of all previous MB&F Legacy Machine releases – with a round case, high domed sapphire crystal, and balance and spiral set in the centre of the dial under an arched bridge (a so-called ‘floating balance wheel’). In 2015, MB&F started the Legacy Machine Perpetual with the launch of two limited editions in 18k rose gold and 950 platinum, each with 25 pieces. Other varieties were offered in subsequent years – in particular, the present reference was announced in 2020. In 2021, an upgraded Legacy Machine Perpetual Palladium model (25 pieces) with flat rectangular calendar correctors instead of the cylindrical ones of earlier releases, appeared.

The complexity of the caliber becomes apparent from the very first glance of the watch, as the calendar mechanism is installed on the dial side of the caliber, and the dial is openworked.

The Legacy Machine Perpetual is one of the most visually appealing designs in the MB&F collection. The complexity of the caliber becomes apparent from the very first glance of the watch, as the calendar mechanism is installed on the dial side of the caliber, and the dial is openworked. Thanks to its extremely small production, as well as a charismatic, easily remembered and recognisable design, this watch, like other MB&F releases, finds ardent fans, and therefore rarely appears on the secondary market.

The present example is all the more attractive because of the yellow gold case, rarely used by watchmakers in the modern era, at least in comparison with other shades of gold. Particularly interesting is the combination of yellow gold with the dial, which uses a blue tone, the antagonist colour to yellow. This is definitely one of the best combinations in terms of contrast and attractiveness.

The watch features a high level of finish on the caliber components typical of the MB&F collection, including traditional techniques – Côtes de Genève striped finish of the bridges, colimassonage (snailing) finish of the mainplate, jewels set in gold chatons, chamfering and polishing, fine polishing of the screw heads, spherical polishing of the shafts and pins, and fine straight grinding of the calendar mechanism’s steel components. This certainly enhances the appeal of this lot.

The MB&F Legacy Machine Perpetual Limited Edition Ref. 03.YL.BL would appear to be a fine purchase for the collector thanks to its unique design, excellent and elaborated hand finishing of the case, dial and both sides of the movement, as well as the unique perpetual calendar mechanism, invented for MB&F by Stephen McDonnell, which evidently requires great skill and experience of the watchmaker who assembles it. Therefore, it is also a fine purchase for the collector who looks to obtain a complicated mechanical watch, one of the iconic timepieces of modern haute horlogerie. It is easily recognisable and instantly memorable. Its stand-out design is sure to move a person who strives to show independence in creating their own style.