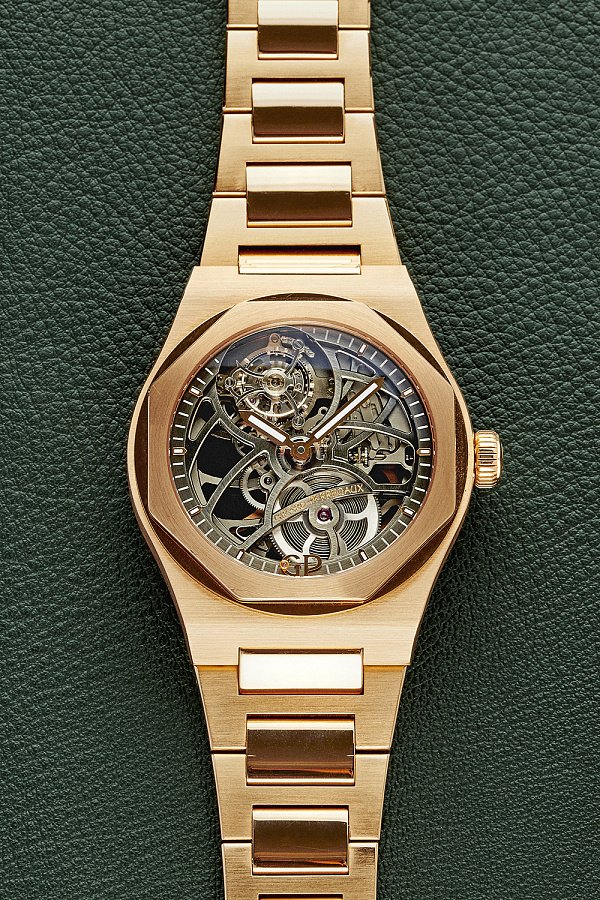 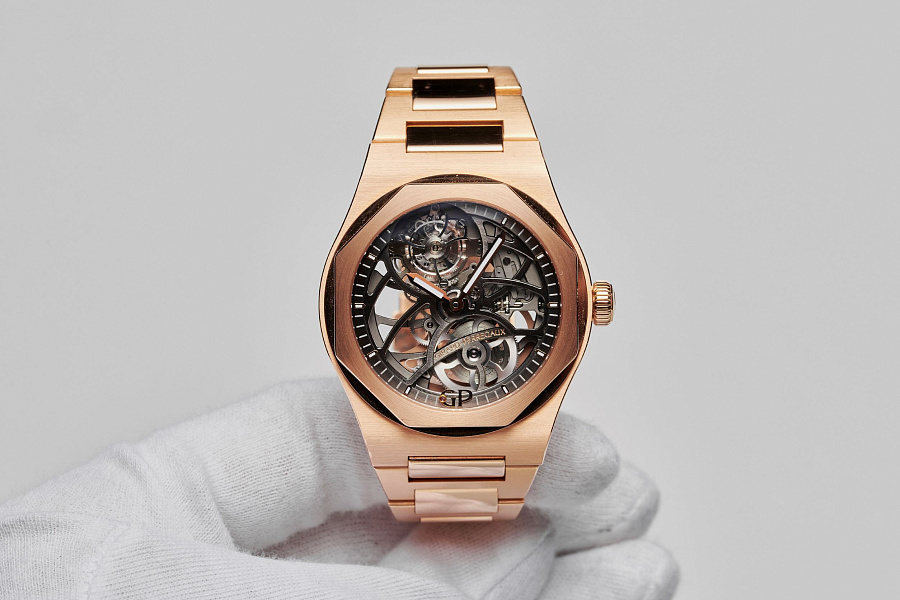 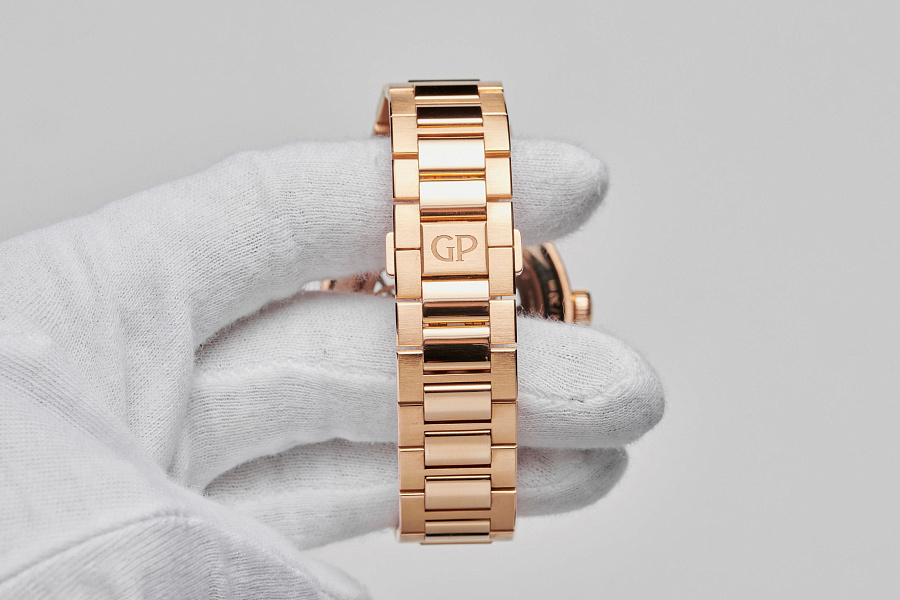 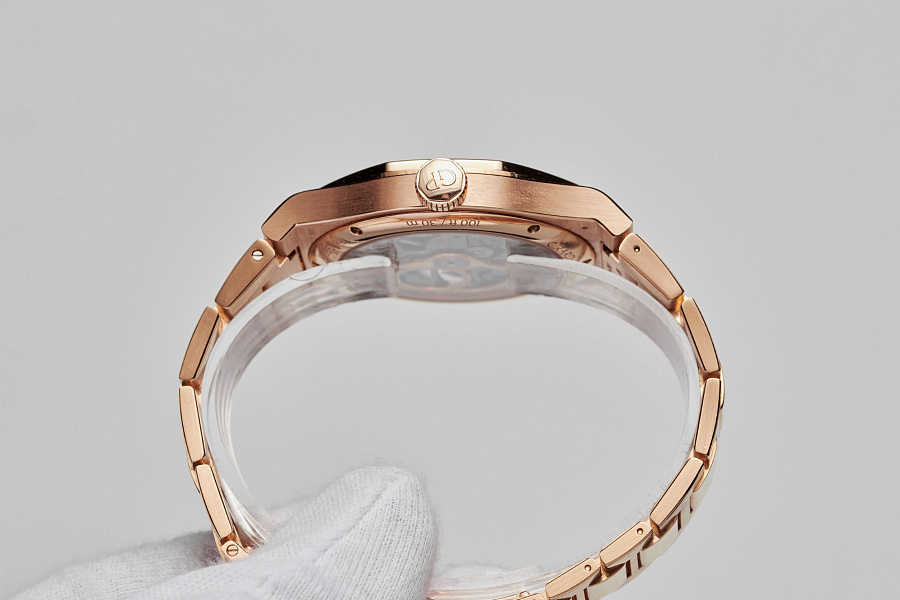 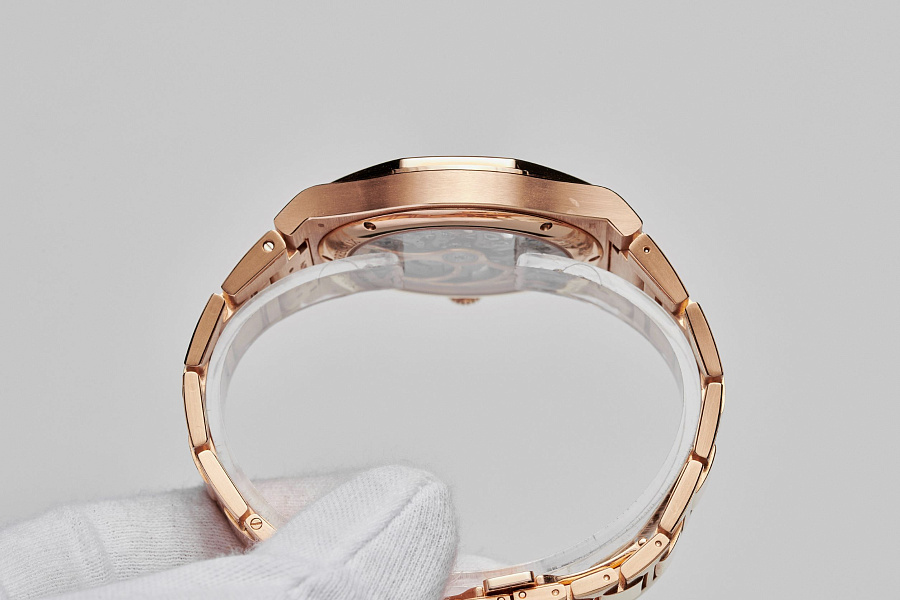 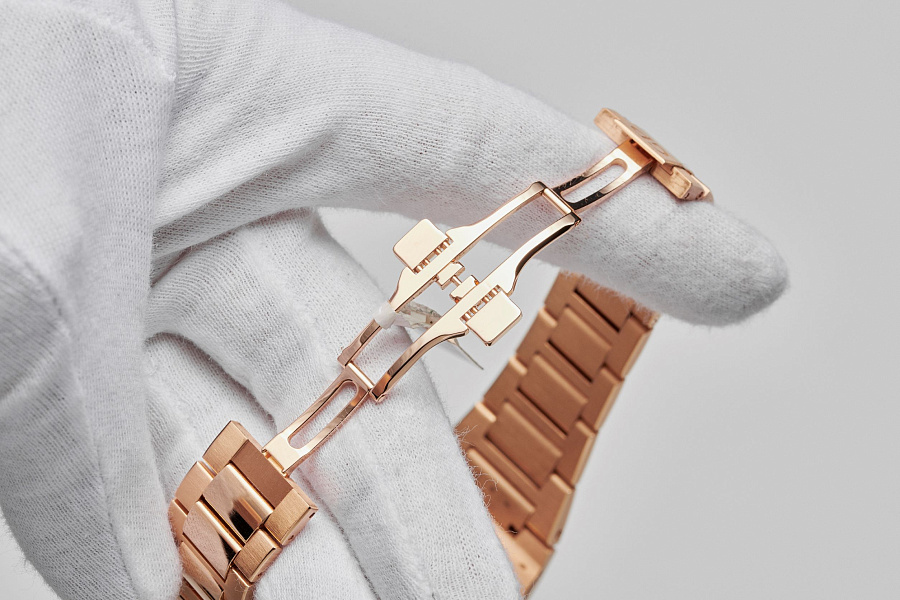 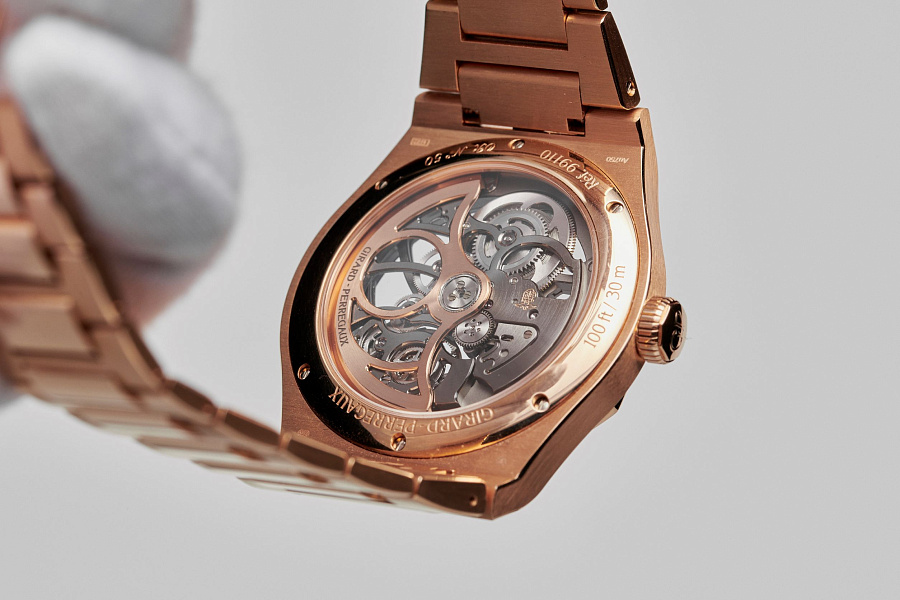 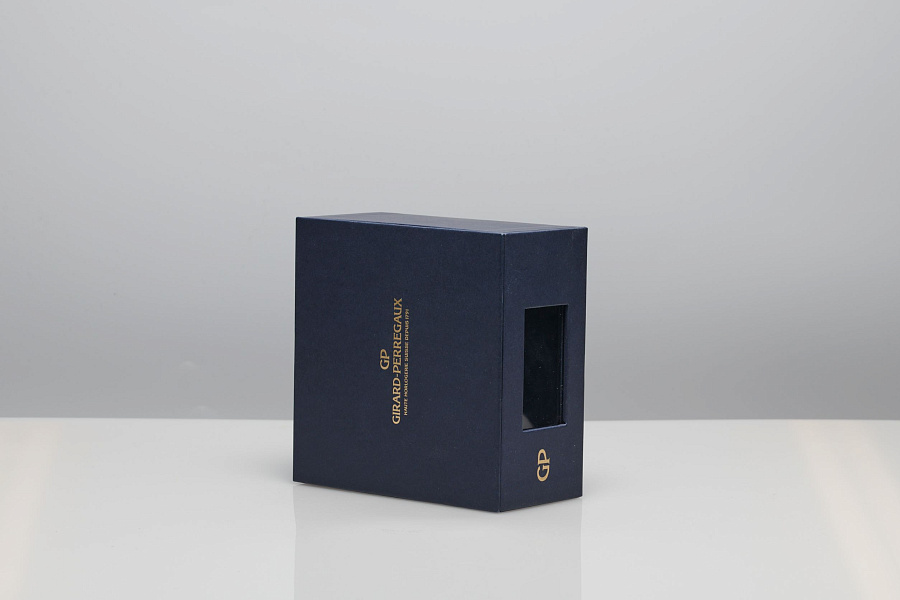 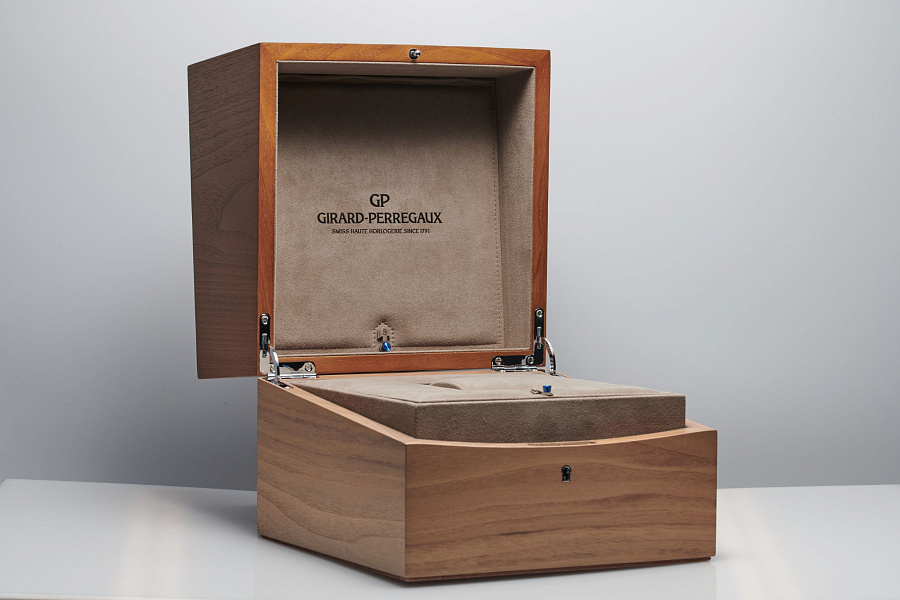 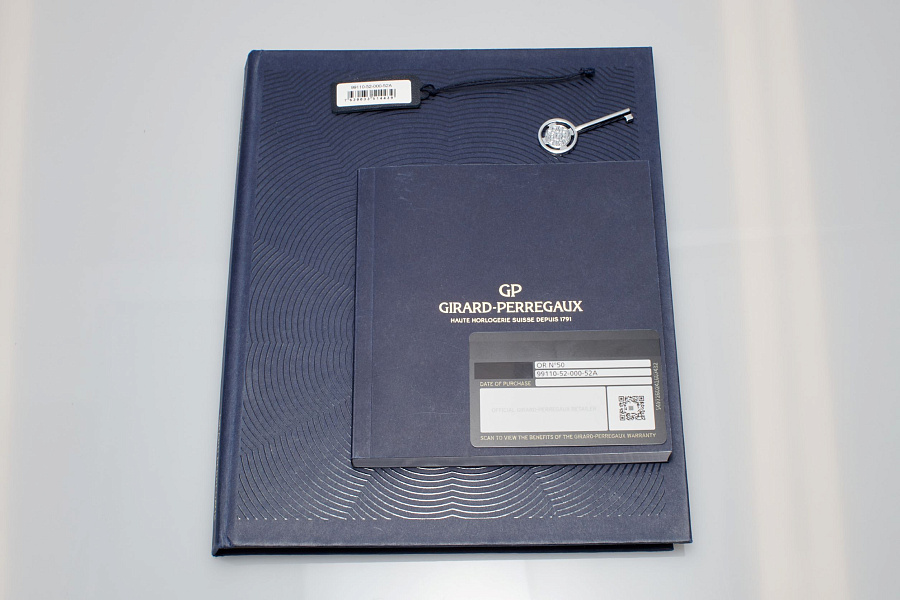 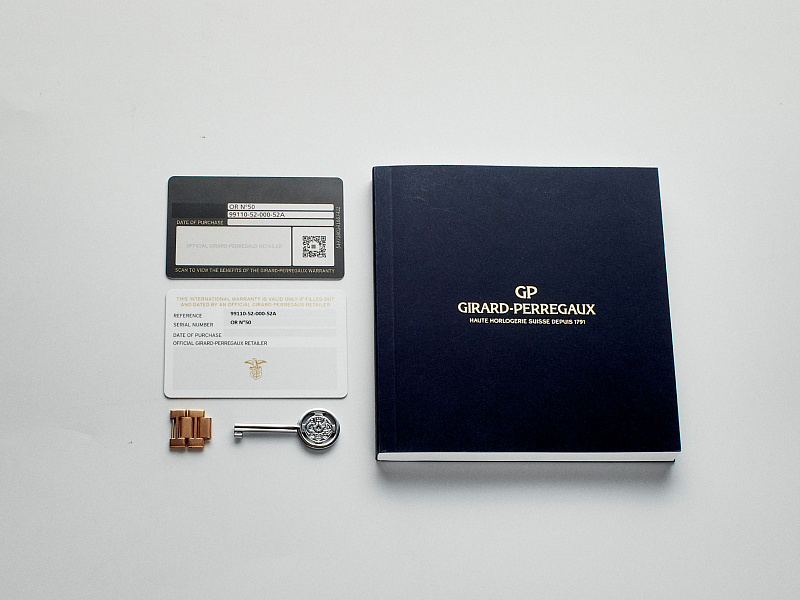 The Laureato Flying Tourbillon Skeleton numbered edition was launched in 2017, and available in either 18k rose gold (the present reference) or in 18k white gold as reference 99110-53-001-53A on a full-gold Laureato integrated bracelet with triple folding clasp. These references are produced in small quantities – as evidenced in particular by the small serial number of the present example – which increases their attractiveness as a collectible.

The Laureato collection is important in the history of the brand. Launched in 1975, it represented the latest in precision and thin quartz caliber technology, which was actively evolving. In the 1970s, Laureato were one of the few proponents of the currently extremely popular design of luxury steel sport models with integral bracelets, and since then the brand has regularly turned to this design. The most recent revival of the Laureato collection occurred in 2016, when two commemorative limited-editions were introduced for the 225th anniversary of the company. It was a vintage-inspired piece, at least as far as the distinctive case design goes. The watch was sized accordingly to modern tastes and powered by a mechanical self-winding caliber, while the original 1975 versions were fitted with a quartz movements. The fully-fledged comeback of the Laureato collection, as a pillar collection, happened in 2017, with a comprehensive range of 42mm, 38mm and 34mm watches, in steel, two-tone, titanium, ceramic or gold, with time-and-date movement, chronograph, tourbillon, and skeletonized calibres.

The GP09520-0001 caliber is produced exclusively in the skeletonized version. The finely skeletonized mainplate and the bridges are decorated with dark anthracite coating, a type of finish consistent with the chosen manner of skeletonization.

It should also be noted that the GP09520-0001 caliber is produced exclusively in the skeletonized version. The finely skeletonized mainplate and the bridges are decorated with dark anthracite coating, a type of finish consistent with the chosen manner of skeletonization. A 50-hour power reserve is provided by the open barrel at 5 o’clock, which is powered by an 18k rose gold oscillating weight, skeletonized in the same manner as the entire movement.

The traditional art of the skeleton watch, which has been present in watchmaking for many centuries, is characterized by a baroque style with finely trimmed skeletonized parts of the movement. Carving and engraving are used in abundance, so that the overall mechanism leaves the impression of a metallic lace. The style of skeletonization used by Girard-Perregaux in the development of the Laureato Flying Tourbillon Skeleton belongs to the relatively recent art déco period, when watchmakers of the finest watch brands began to abandon excessive detailing in favour of a more laconic and clearly-expressed image, with pure geometry dominating. This style is emphasized in the Laureato Flying Tourbillon Skeleton by the use of the dark anthracite metal coating of the mainplate and bridges, which gives the movement a somewhat technical character, as well as the costly use of manual labour in decorating all the components of the movement. The skeletonized mainplate, bridges and rotor are finished with fine straight grinding, chamfering and polishing, where special attention is paid to the impeccable hand finishing of the sharp internal angles. Only a few haute horlogerie brands undertake this extremely time-consuming operation, with most of them doing their best to avoid the additional cost of this work, which is nevertheless highly valued by connoisseurs and discerning collectors.

The 42mm Laureato Flying Tourbillon Skeleton, first introduced in autumn 2017, is a modern version of a luxury lifestyle sports watch that combines a comfortable wearing experience with an impressive presentation of the high-class skeletonized and complicated mechanical movement within. Girard-Perregaux produces it exclusively in 18k gold, and it may be regarded as one of the finest complicated timepieces of a luxury sports watch on an integrated bracelet.