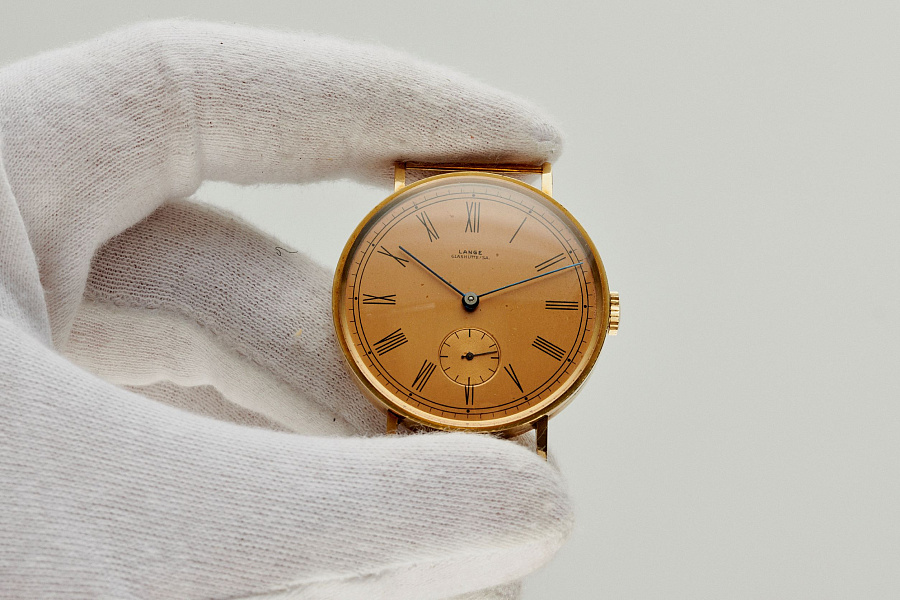 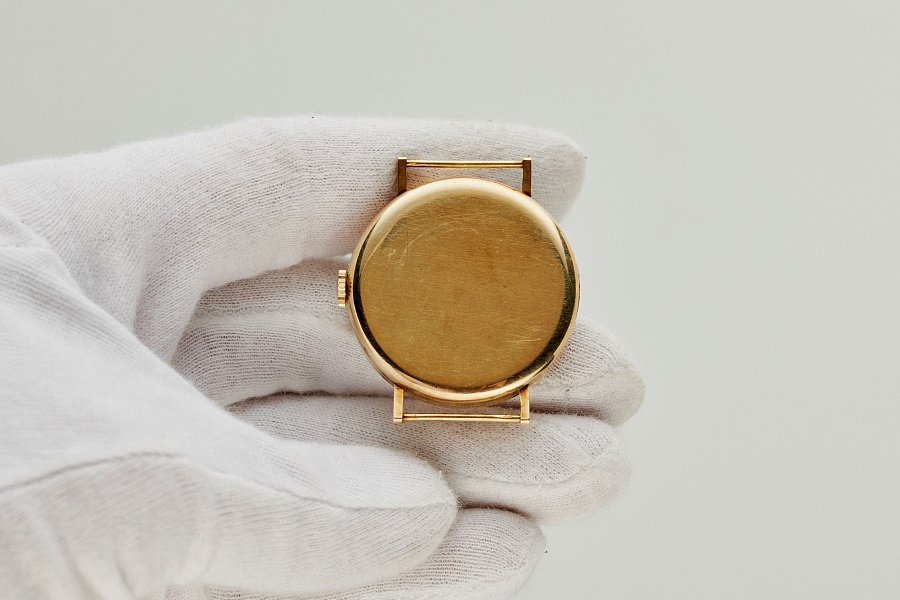 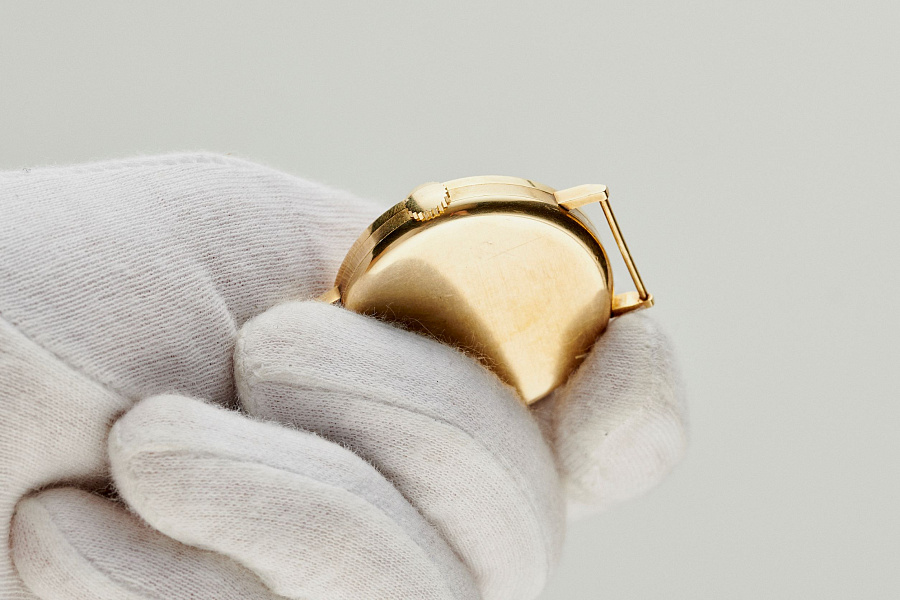 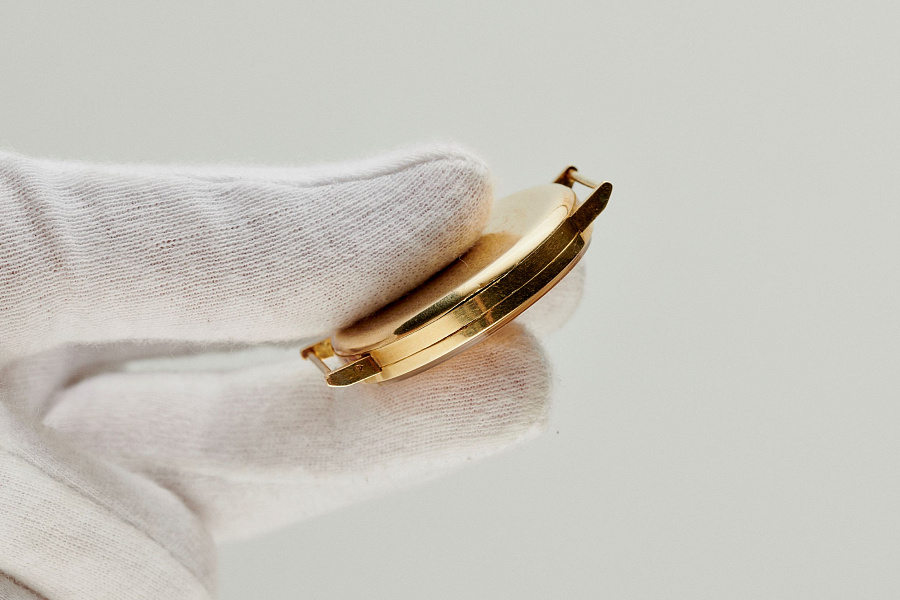 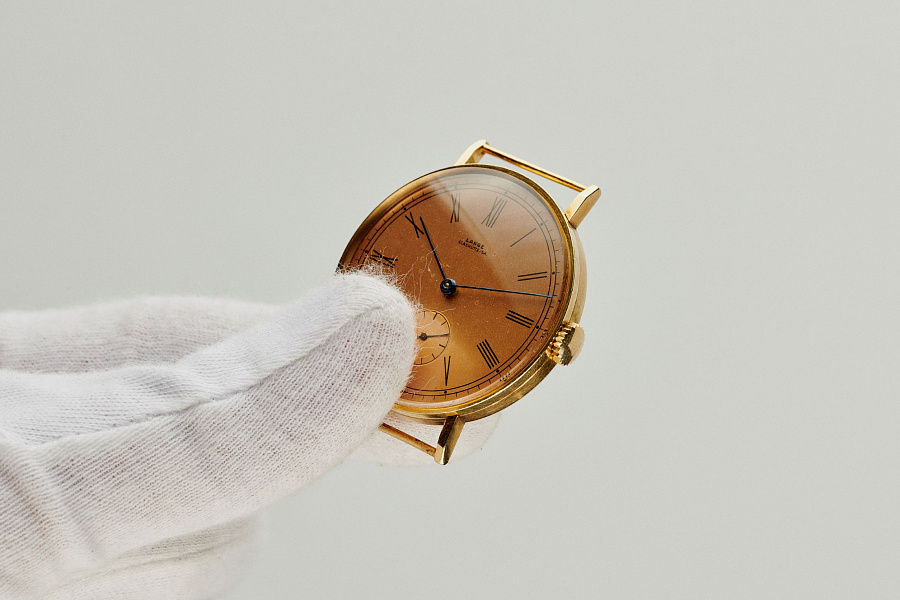 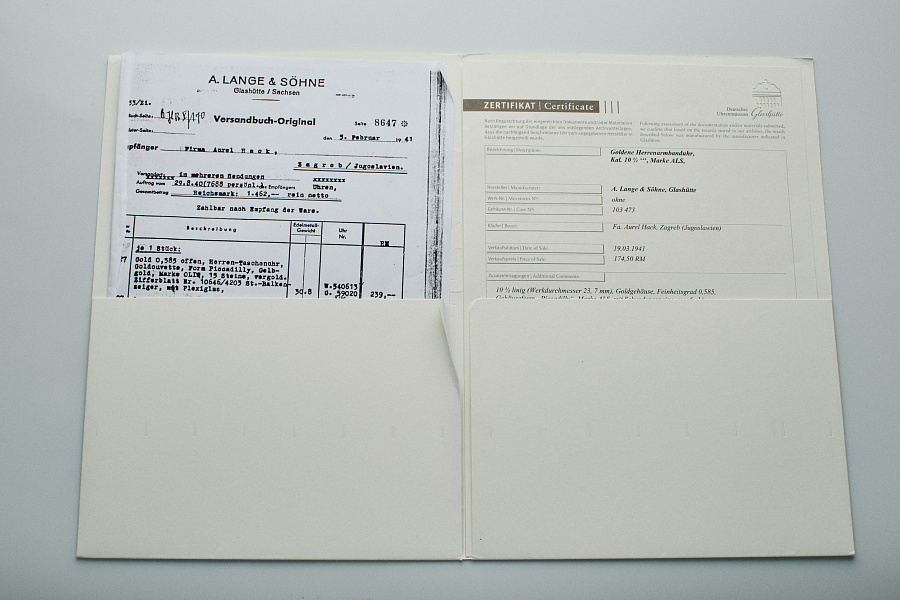 In the 1930s, Otto Lange, director of A. Lange & Söhne, launched the production wristwatch collection, all timepieces of which were signed as “Lange Glashütte/Sa.” or “Lange-Uhr Glashütte/Sa.” These were more accessible compared to A. Lange & Söhne’s high-end wristwatches of that period. In fact, Lange Glashütte/Sa. was a sub-brand of the world-renowned German brand name. The watches were powered by round or shaped calibers of Montres Altus, the Swiss movement-blank factory. The finishing of the calibers shows signs of high-quality workmanship, typical for Lange, including a blued Breguet hairspring, double spiral finishing (double solarisation) on the barrel ratchet wheel, a highly polished index lever and endstone cap, engraved and gold-plated inscriptions, fine chamfering work, Côtes de Genève decorated bridges, a perlage-embellished mainplate, finely finished screw-heads, and spherical polishing of pivots and pins. In particular, we would like to draw attention to the sharp internal corners with meticulous handwork shaping and polishing of the inner exterior and interior angles during bevelling, which are unthinkable in modern accessible watches. This is an extremely costly operation for a watch brand, where a lot of time and effort is required.

Reinhard Meis notes in his ‘A. Lange & Sohne. The Watchmakers from Dresden’ book, “the cases were usually in steel with a few in 14-carat gold” (p.314), which highlights the rarity and collectible value of gold examples, such as the present lot.

This wristwatch, as well as the other two Lange Glashütte/Sa. lots of this sale, in addition to belonging to the history of the famous brand from Saxony, are of interest due to their design. Today, this is usually defined as a northern European style with a minimalist design built on simple, geometric shapes, a technical manner of designing the dial and the rejection of unnecessary details. It’s amusing to find that these three lots confusingly anticipated the design of the watch collection of the contemporary German watch brand Nomos Glashütte, with the Lange Glashütte/Sa. collection produced many decades before the modern Nomos brand was founded in 1990. In particular, the design similarity is evident in the thin stick-shaped hands, thin Roman numerals, small seconds sub-dial with dashed 10-second markers, straight and thin lugs, and a modest cylindrical case with a thin bezel. In the release of such watches, A. Lange & Söhne acted ahead of time, which undoubtedly adds to the attractiveness of this lot.

The A. Lange & Söhne ‘Lange Glashütte/Sa.’ would appear to be a fine purchase for the collector who desires an appealing and highly rare solid 14k gold wristwatch from a world-famous traditional watch brand, earning a reputation as one of the finest watch manufacturers. The present lot reveals a classical northern European style and features the hallmarks of high-class watchmaking, which are seen above all in the fine finishing of the caliber. A. Lange & Söhne’s reputation in these aspects should be recognised as impeccable. Its neat appearance and discreet execution, which are a treasure in their own right, will impress the heart of any connoisseur.