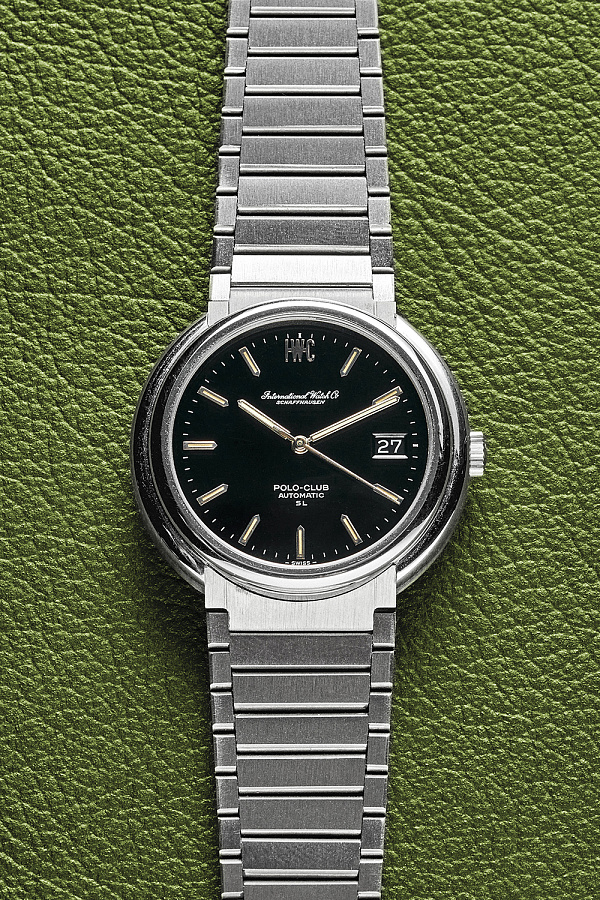 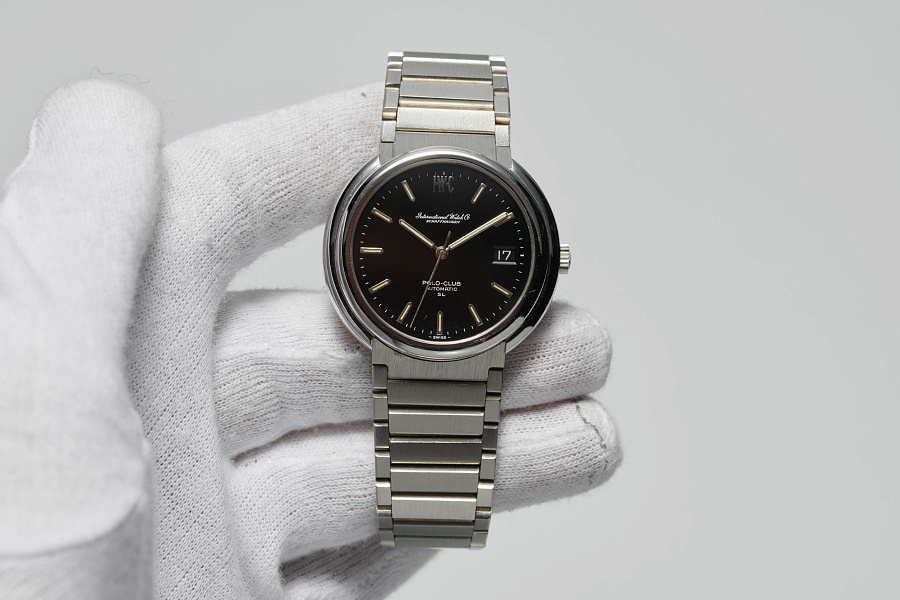 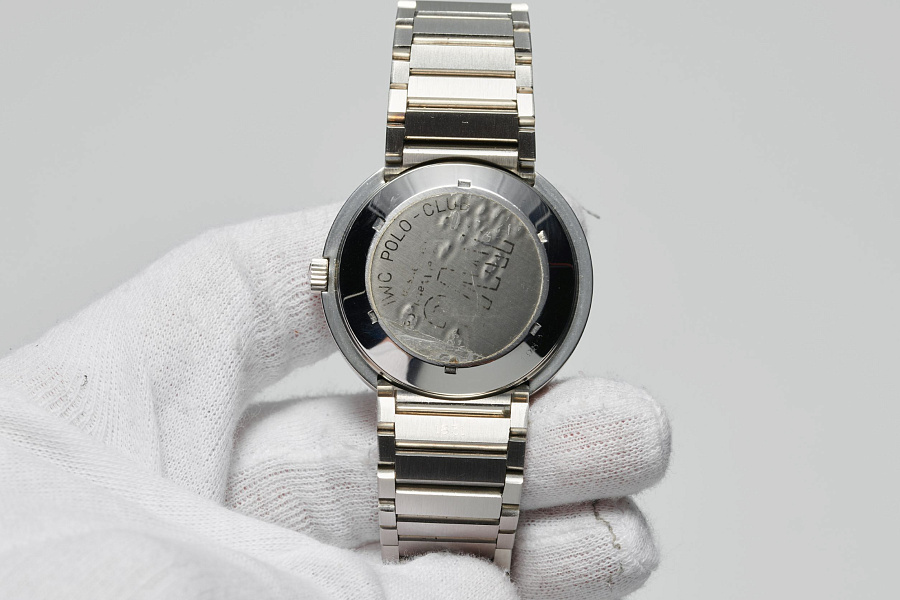 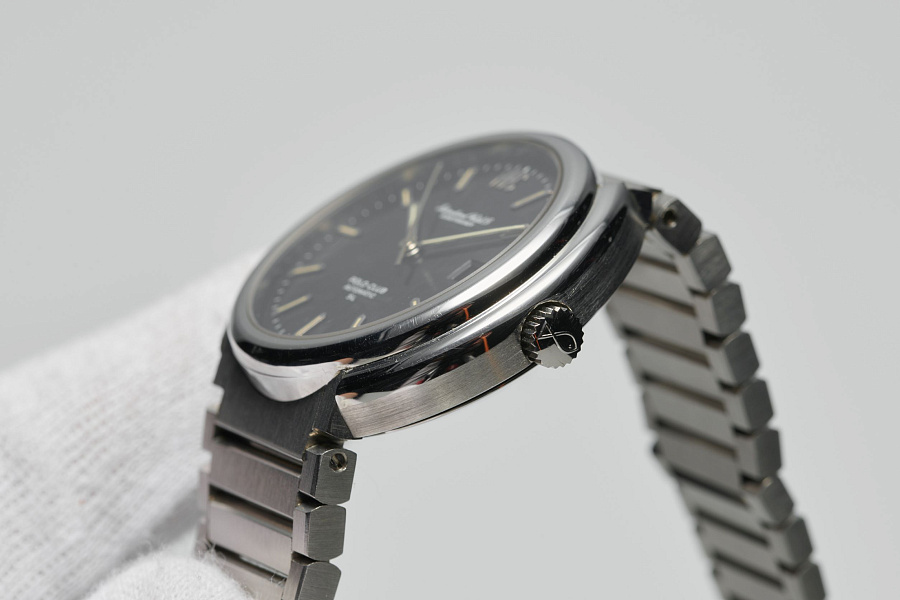 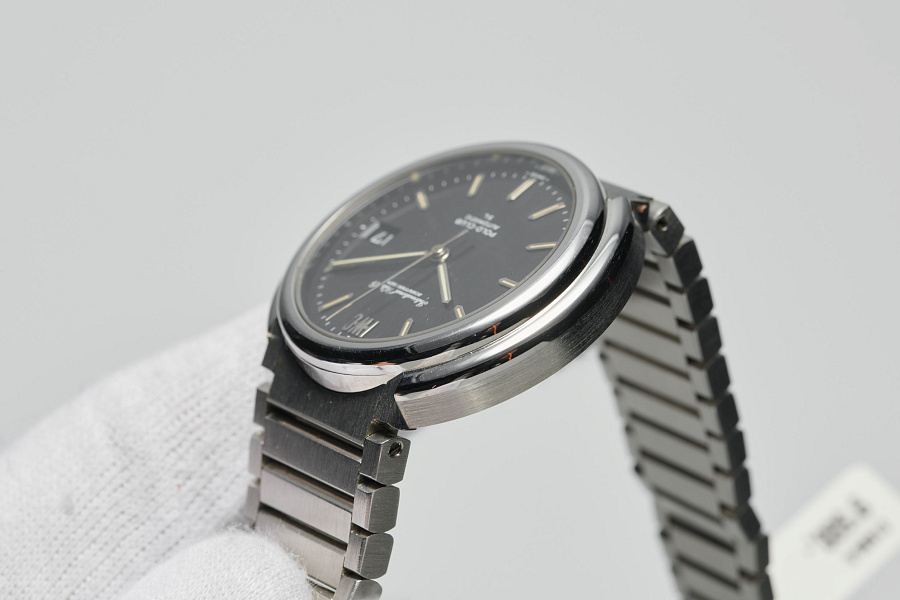 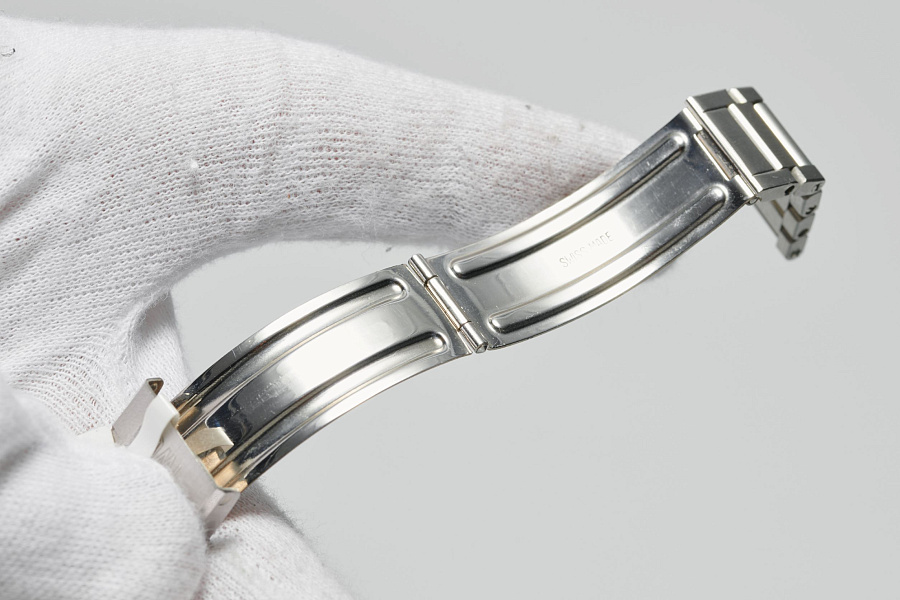 It is common knowledge that the design of the Ingenieur SL ‘Jumbo’ Ref. 1832 was created in 1976 by Geràld Genta, the renowned watch designer. Together with this watch, IWC launched three other models of the SL collection: Polo-Club SL (the present reference), Golf-Club SL (Ref. 1830) and Yacht-Club II SL (Ref. 3212). The abbreviation ‘SL’ that unites these references nowadays has a dual interpretation: as both ‘Steel Line’ and ‘Sports Line’. Both interpretations have a logical justification, since all these references were offered in 1976 only in steel versions, and on integrated steel bracelets, which undoubtedly gave them a sporty character.

Careful consideration of the design of these references allows us to establish a number of significant and clearly carefully-chosen coincidences. Firstly, this is a very similar dial design with generally the same set of indexes and hands as in the IWC Ingenieur SL ‘Jumbo’ Ref. 1832 – featuring baton-shaped hands with a pointed tip (aka ‘pencil’) and applied indexes of the same shape. In addition, the Ingenieur SL, Polo-Club SL and Golf-Club SL dials have an applied metal logo at 12 o’clock. We also note something shared by all references of the SL collection of 1976 – the equal width of the hour hand, minute hand and applied indexes with luminous paint, which gives the dial a particularly harmonious look. Secondly, all references feature an integral bracelet design, as well as tapering bracelet links from the case to the clasp, a sign of high-end design and workmanship. Thirdly, in the finishing of the case and bracelet, straight grinding (in the Ingenieur SL and Yacht-Club II SL circular brushing was also used on the bezel) combined with polishing is used. Finally, the water-resistant screw-down crown of all SL references is marked with an embossed fish symbol. This information leaves open the question of Geràld Genta’s participation in the design of the entire SL collection, as all models, including the Ingenieur SL of which Geràld Genta has confirmed authorship, were introduced together in 1976, and they all share many common features.

This reference was clearly ahead of its time, as evidenced by the high-end in-house self-winding Pellaton caliber, a combination of polished and brushed finishes, and an integral bracelet with tapering links.

It should also be noted that the background of the date window in the black dial SL collection models (including the present example) is black, matching the colour of the dial, a sign of high class in design that is often overlooked by other brands.

The present reference is powered by the 8541B caliber, which belongs to the 85 caliber family (852/8521, 853/8531, 854/8541), all of them featuring the bi-directional spring-and-pawl winding system invented by Albert Pellaton, technical director and chief caliber developer of IWC from 1944. He designed the ‘Pellaton system’ in the late 1940s for early calibers 81 and 85, the first in-house self-winding movements of IWC and something still successfully used in the brand’s calibers.

The SL collection cannot be considered commercially successful in the years of its production span. The circulation of self-winding models should not exceed a thousand pieces – for example, for the Polo-Club SL Ref. 1831, most of which were offered with a vertically-brushed silvery dial (black ones appear on the market much more rarely), there are estimates of a total production of 350–400 pieces, while in some sources you can find a less rigid limit of up to 600 pieces.

The present Polo-Club SL Ref. 1831 ‘Black’ with a magnificent Pellaton self-winding caliber 8541B and a black dial in the original execution is a monument to the watchmaking art of the 1970s, the era of the first arrival of steel sports-elegant watches on an integral bracelet. This reference was clearly ahead of its time, as evidenced by the high-end in-house self-winding Pellaton caliber, a combination of polished and brushed finishes, and an integral bracelet with tapering links. Unfortunately for the brand and to the delight of collectors, these high-end watches were not appreciated by their contemporaries, their circulation is very small, and the collector’s prospects are rated as very promising.