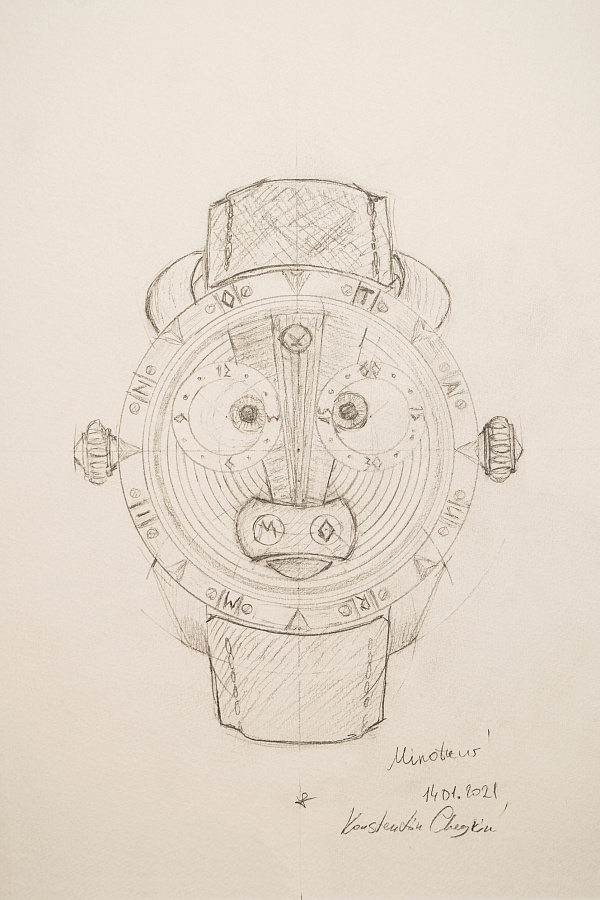 This Chaykin's sketch of the Minotaur watch, inspired by the famous Greek myth about the fantastic creature with a bull's head, shows all the main details of this piece. The master has realized the «features» of the Minotaur in every part of the watch.

The nostrils, covered by sapphire crystal lenses, are nothing but a two-disk weekday indicator invented by Chaykin.

The Minotaur's eyes have the similar to other Wristmons function — they are actually hour and minute indicators. The nostrils, covered by sapphire crystal lenses, are nothing but a two-disk weekday indicator invented by Chaykin.

The artist has carefully sketched a combination of different textures of the dial's finishing, giving the watch an astonishing expressiveness and volume.

The Wristmons is the most famous among all Konstantin Chaykin's collections. The idea of making face-like dials was revolutionary for watchmaking industry.

Thanks to the continuous motion of the indicators, the emotions portrayed change literally every second. It is not surprising that this idea provides a source of endless inspiration for Wristmon's new looks. They are embodied not only in the new watches that join the collection every year, but also in dozens of drawings and sketches.