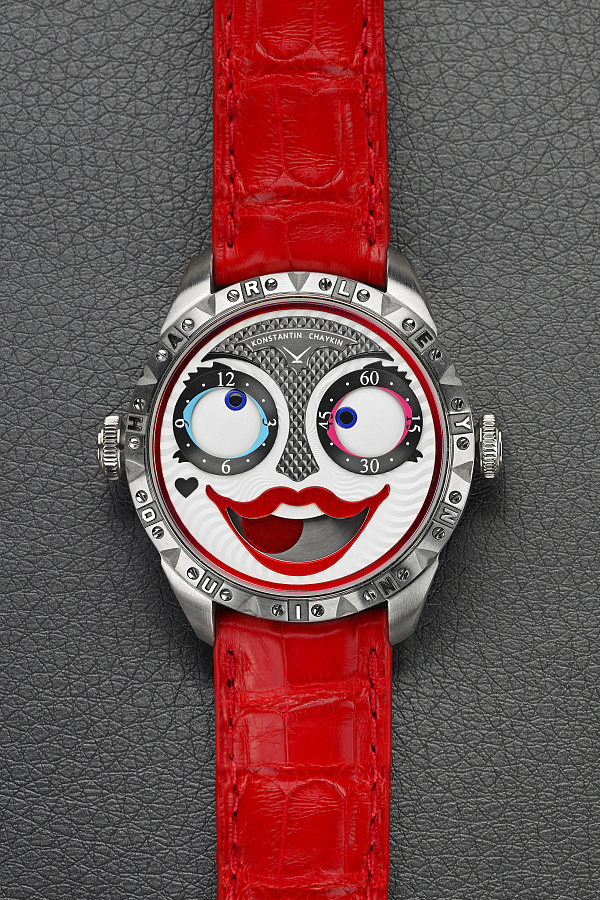 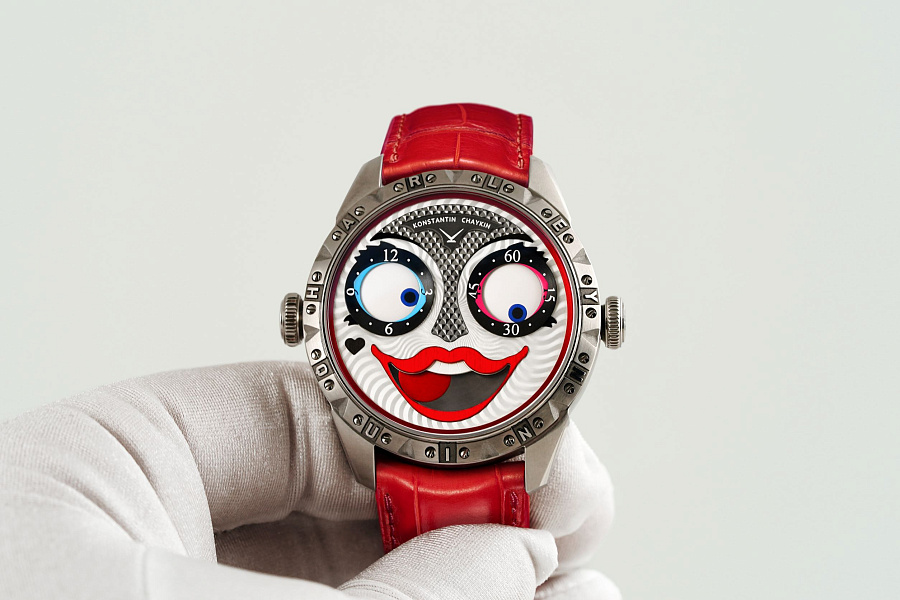 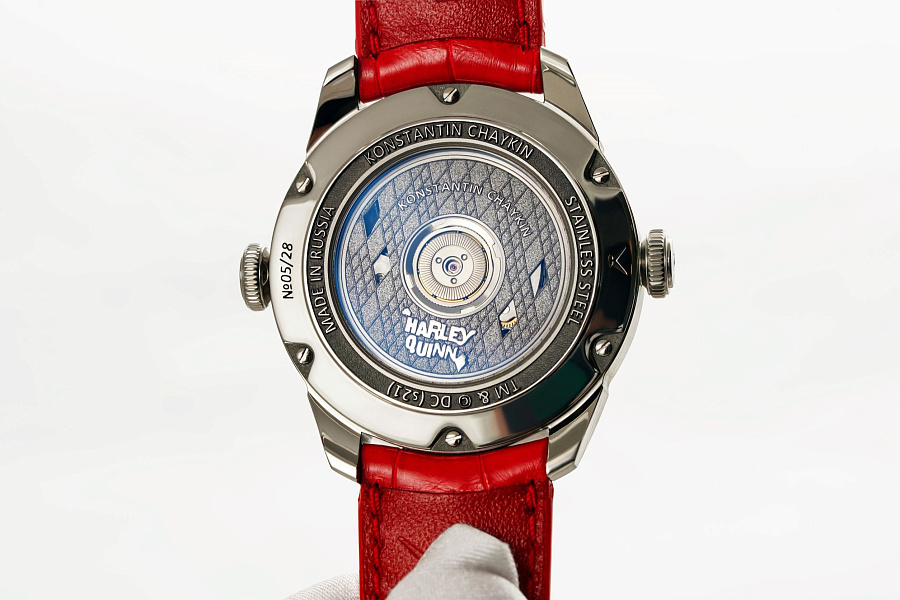 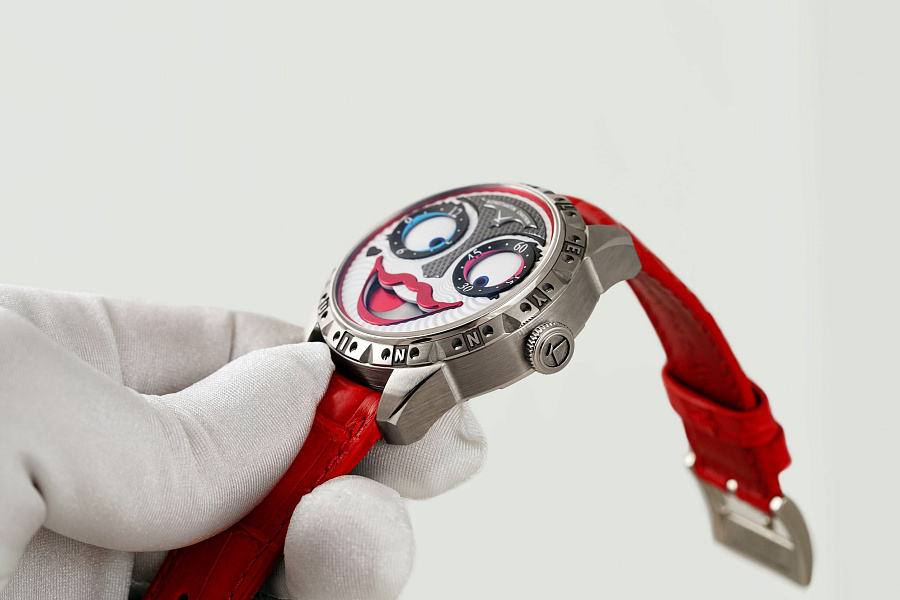 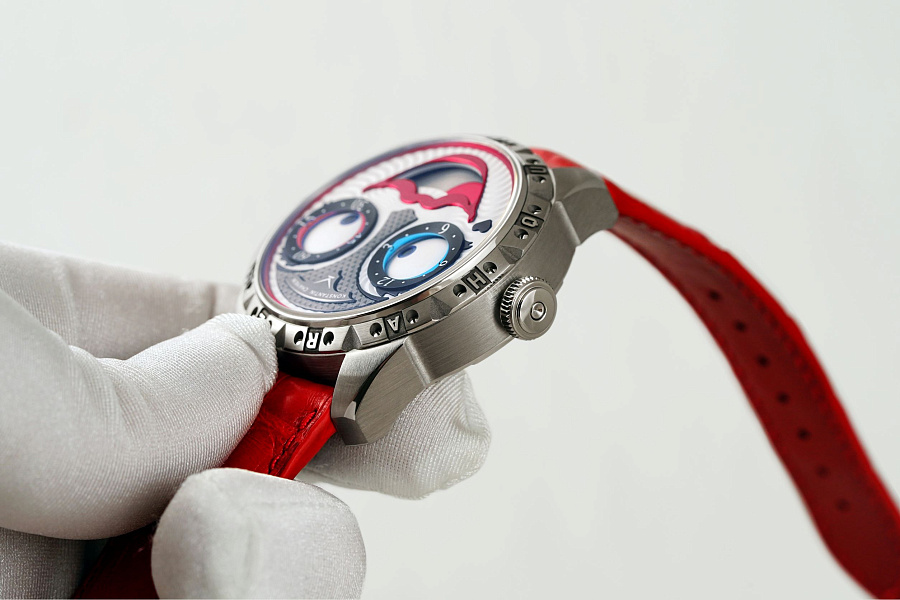 The Harley Quinn Limited Edition, along with the Joker Five watch, are the first models of the Wristmons collection to represent DC Comics’ fantasy Gotham City characters. Konstantin Chaykin created this design in 2022 and it is his first limited edition with a female character. It is also a kind of joke typical of an independent watchmaker, offering two models – a male comics and movie character and his girlfriend. The master carefully crafted a look that combines the features of the first Joker watch of 2017 with the familiar features of the Harley Quinn character. Accordingly, Konstantin Chaykin has reduced the typical Wristmons’ 42mm case size by 2mm to 40mm.

The present example is powered by the self-winding caliber K.07-4, developed by Konstantin Chaykin based on his caliber K.07-0. The latter was created in 2017 for the steel Joker watch of the first limited edition. K.07-0 was based on the Swiss-made Eta 2824-2 with an added in-house indication module, while in the K.07-4 the basic mechanism is different – it is the thinner Eta 2892-A2, although the Joker-indication module in general is the same. The characteristic feature of the present watch and its caliber is its offbeat design, with an anthropomorphic Joker-indication with disc indicators for the hours, minutes and moon phase. The hour and minute sub-dials look like the character’s eyes, while the moonphase indicator resembles Harley Quinn’s smiling mouth. The dial design reproduces the two-tone Harley Quinn theme with turquoise and pink eye edging, as well as, perhaps, one of the most noticeable details of the strange, crazy, but so harmonious and intriguing appearance of Harley Quinn – a black tattoo on the cheek in the form of a heart, which first appeared on her face in the Suicide Squad movie.

The dial design reproduces the two-tone Harley Quinn theme with turquoise and pink eye edging, as well as a black tattoo on the cheek in the form of a heart

Every minute the position of the hour and minute sub-dials changes, and when combined with the smiling moonphase display changing its position every day, the Wristmon’s face-like dial constantly expresses a new emotion.

Konstantin Chaykin works on his collection like an artist, striving to embody in it fresh technical, design or philosophical ideas. That is why he does not intend to fill the market with countless possible colour variations of the Joker watch, and also why the appearance of a truly new model is an excellent and very rare chance for a collector to acquire their own Wristmon. The one-of-a-kind design of the face-like dial is the main feature of both the Harley Quinn watch and other Konstantin Chaykin Wristmons, and for this reason they are considered one of the most emotional, memorable and notable watches in the modern watch industry.

The Konstantin Chaykin Harley Quinn Limited Edition would appear to be an extremely attractive purchase for the collector looking to obtain a highly unusual, sophisticated and emotional mechanical wristwatch from a renowned independent watchmaker, a member of the respected AHCI – Académie Horlogère des Créateurs Indépendants. The combination of the extraordinary design, memorable and instantly recognisable appearance and haute horlogerie execution and finishing undoubtedly adds to the appeal of this lot. Moreover, this is definitely a watch with a strong and distinctive character, and therefore it would also be an incredibly attractive daily wearer.