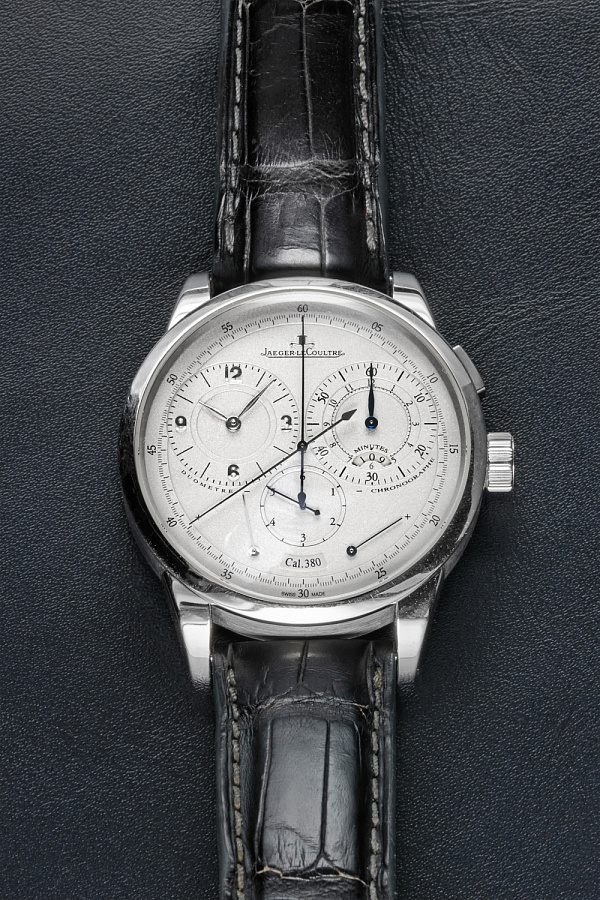 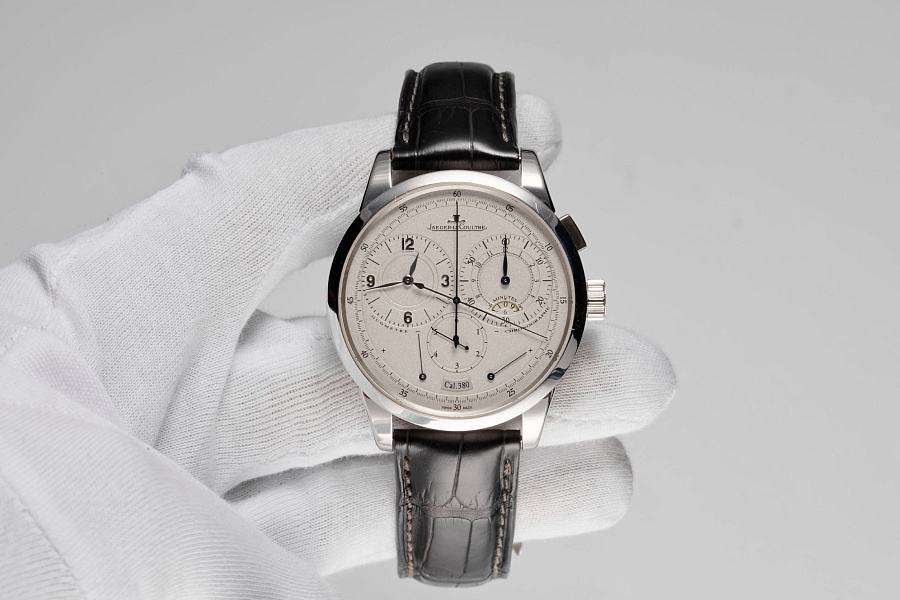 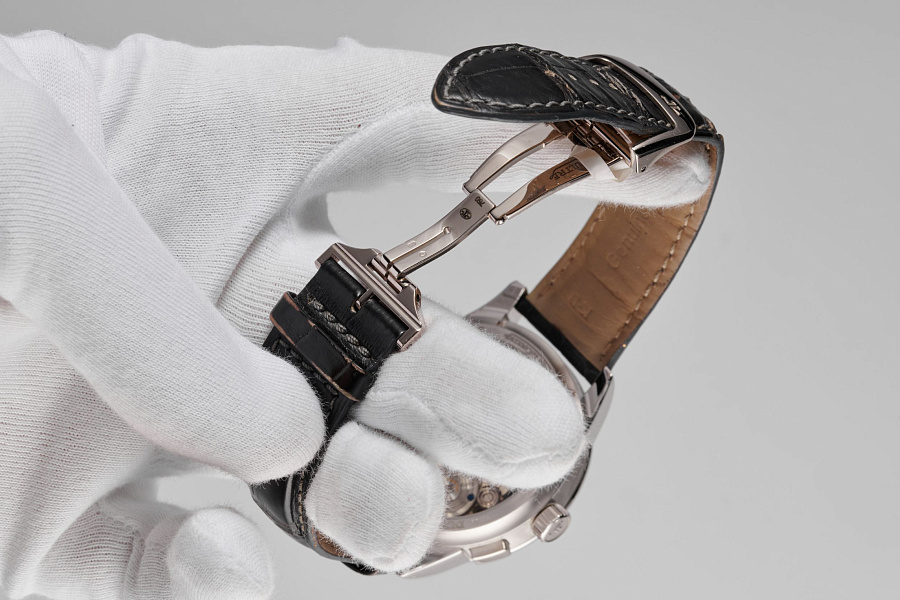 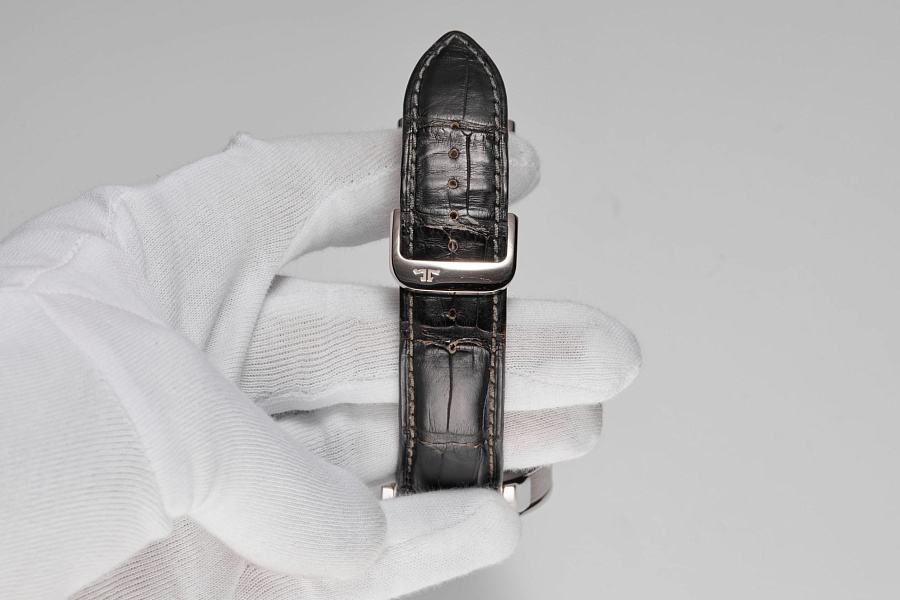 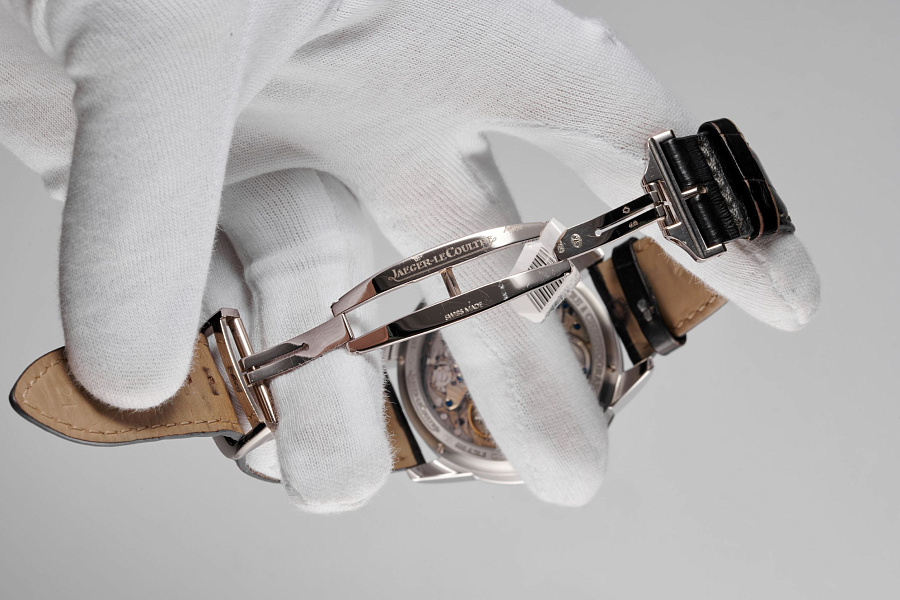 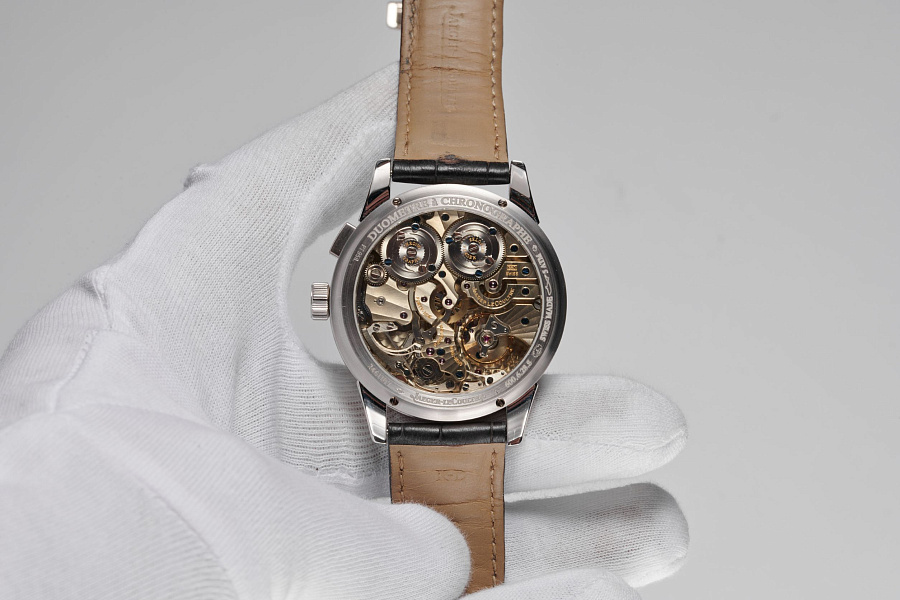 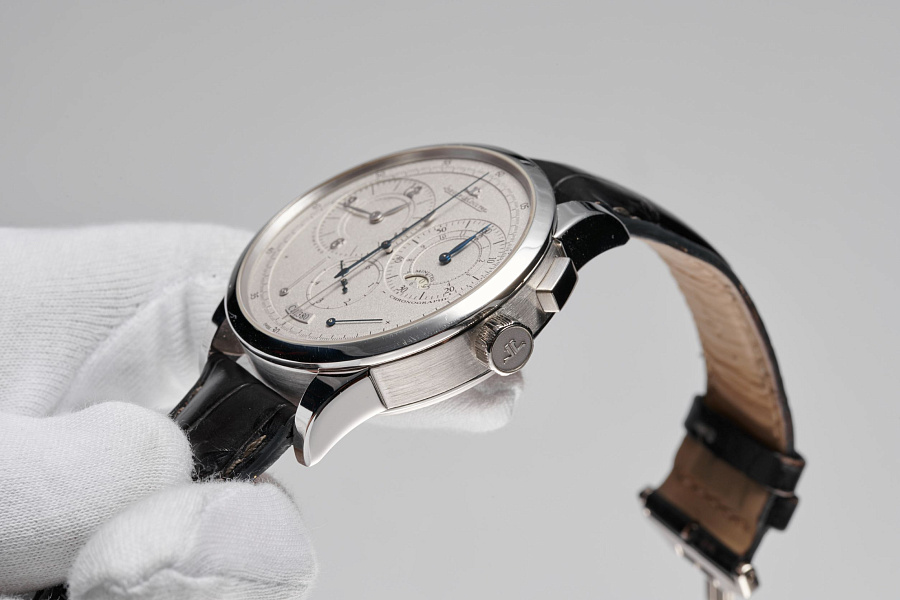 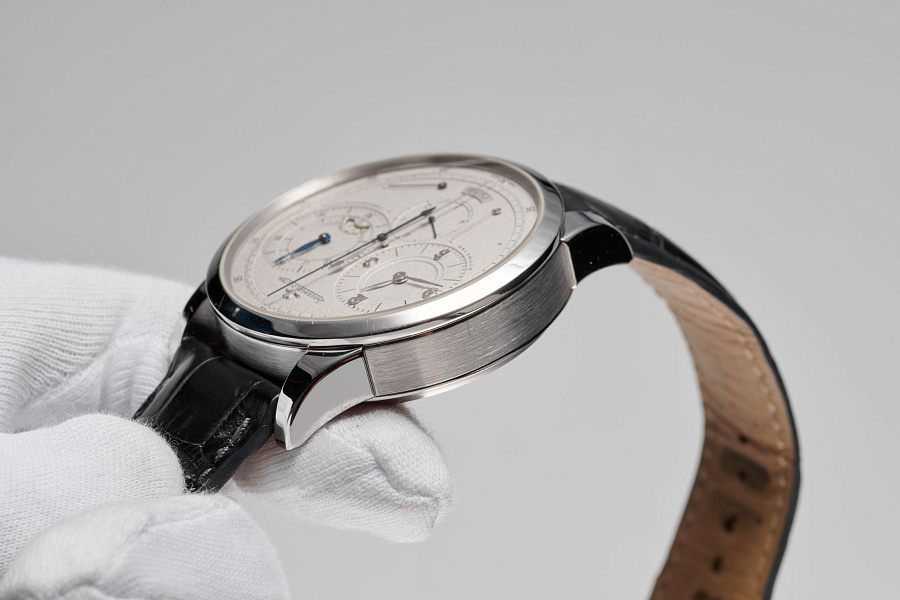 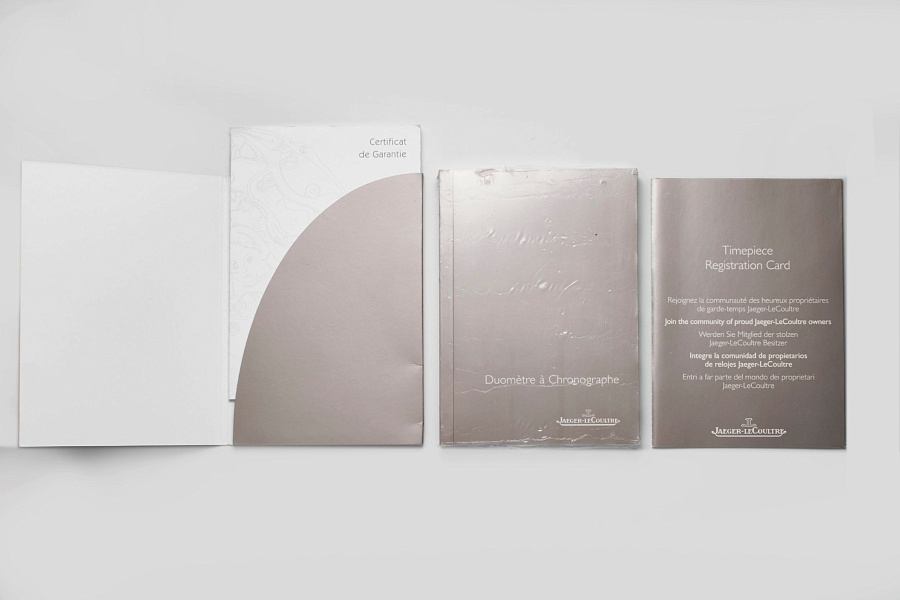 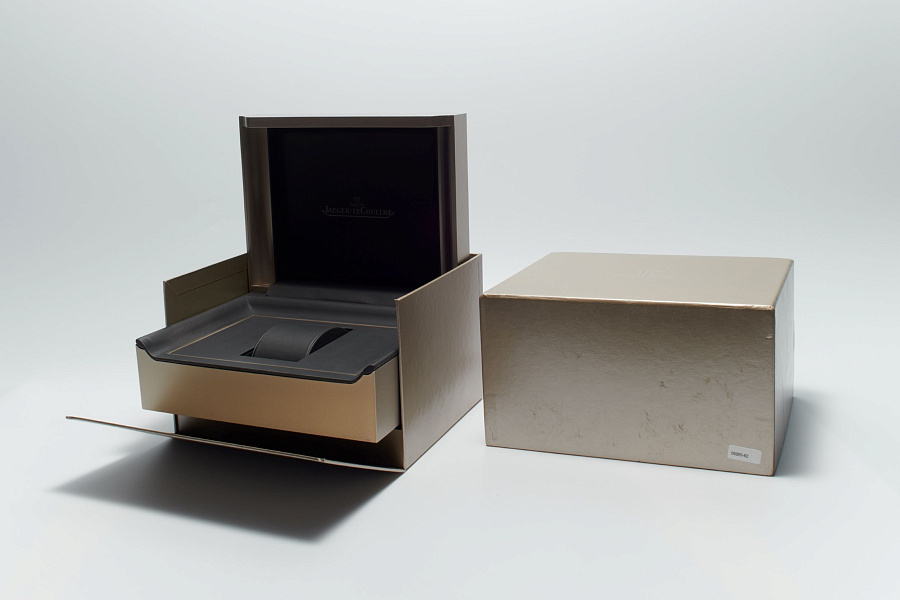 Duomètre wristwatches of a dual-wing concept, featuring one escapement and two independent gear trains – the first just for timekeeping, and the second for functional displays, including the indication of time in hours and minutes – were first developed by Jaeger-LeCoultre in 2007, when the Duomètre à Chronographe watch was launched. The initial range included 42mm models in platinum 950 (the present lot), in 18k rose gold and in 18k yellow gold issued as a limited edition of 300 pieces, all with grainy textured dials. The current Duomètre collection line-up includes only the 42mm 18k rose gold Duomètre Chronographe model with a partially opened dial.

The originality of the Jaeger-LeCoultre’s dual-wing concept implemented in the present watch is often explained by the similarity to a complicated pocket watch equipped with a double or even triple wheel gear system. In the 19th and 20th centuries, these were usually pocket watches with a full strike (grande sonnerie), a trip minute repeater, an independent-seconds hand, a seconde foudroyante, or even more complicated examples, the recognized master of which in the 19th and the first half of the 20th century was the LeCoultre factory, the predecessor of the modern Jaeger-LeCoultre brand. It should be clarified that such a comparison is not completely correct, since the aforementioned pocket watches had separated gears for the time indication system and for additional functions, for example, a full strike, but the modern Jaeger-LeCoultre’s dual-wing concept is arranged differently. In it, one gear with its own barrel is intended only for timekeeping, without complications (except its power reserve indicator), while the second gear with its own barrel moves complications, and both connect to a single escapement with spiral and balance.

The extraordinary combination of its platinum case and solid platinum dial with grained finish offering a unique shade and play of light undoubtedly adds to the appeal of this lot.

With a unique dual-wing concept embodied in it, the Duomètre à Chronographe is a pure pleasure for the connoisseur of fine mechanical watchmaking. The ingenuity and unusual combination of rare mechanical functions are incredible. The same emotions are evoked by the high-quality execution of the watch. The caliber 380 with mainplate and bridges in German silver, decorated with a radiating côtes soleillées pattern and carefully polished chamfers, shows a very attractive patina over the years, giving the movement a golden and grey tint. The distinctive granular texture of the silvered dial is produced by hand-chiselling with a special graver, with the surface of the dial undergoing repeated procedures in all directions until the desired texture is obtained. Numerous indicators are thoughtfully placed on the dial, which is enlivened by a seconde foudroyante hand which moves with lightning speed (hence its name in French), making a revolution in one second and six jumps.

The Jaeger-LeCoultre Duomètre à Chronographe Platinum Ref. 600.6.28.S appears to be an extremely attractive purchase for a collector or haute horlogerie afficionado as a truly rare watch featuring a caliber of a unique concept, peculiar aesthetics, embedded with traditional finishings and breakthrough inventions. Our research shows that the Duomètre à Chronographe in platinum very rarely appears on the market compared to the much more common rose gold models, and therefore is of significant collection value. The extraordinary combination of its platinum case and solid platinum dial with grained finish offering a unique shade and play of light undoubtedly adds to the appeal of this lot.