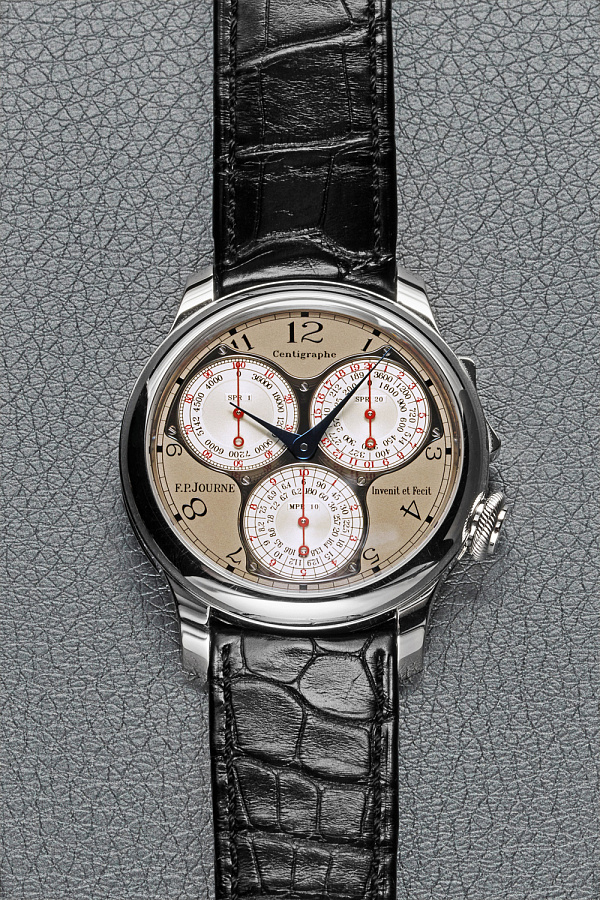 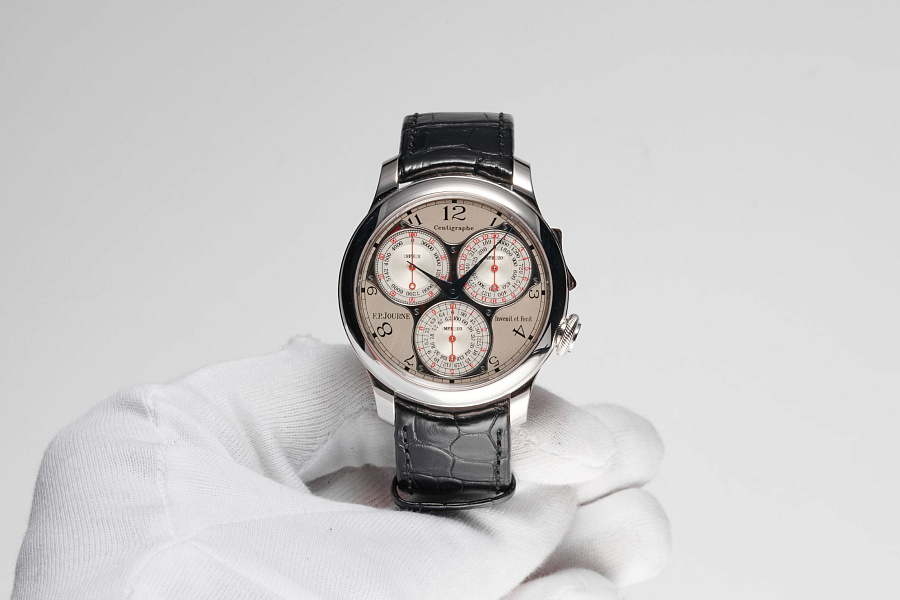 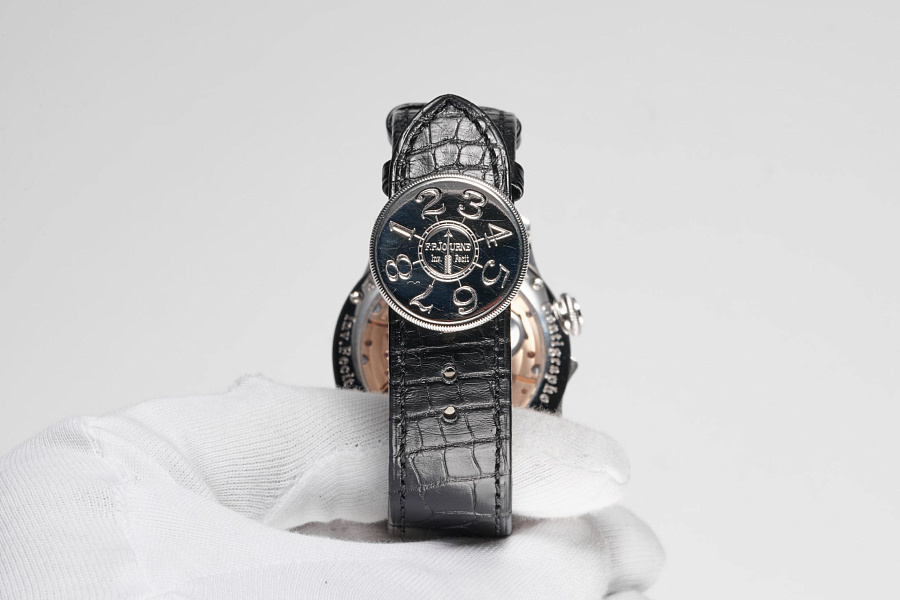 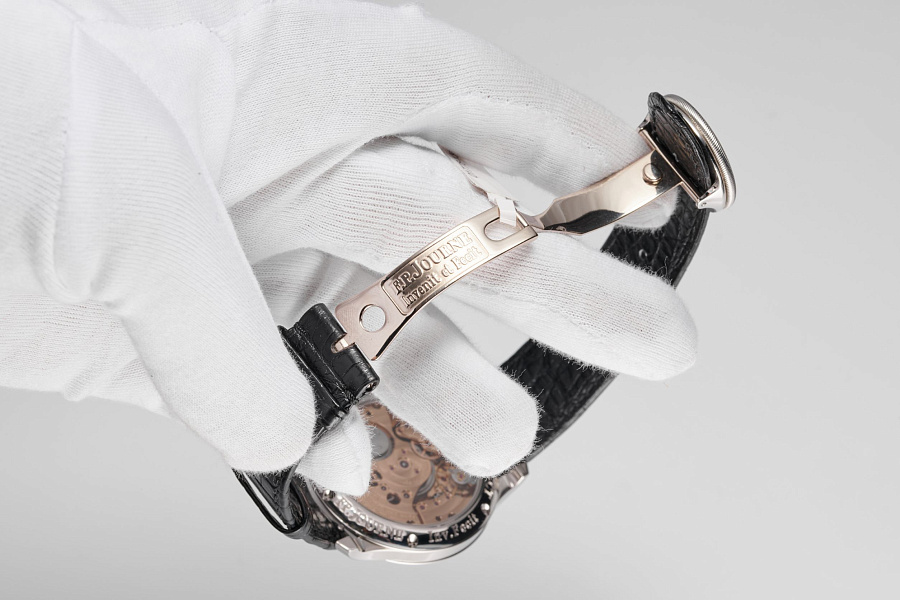 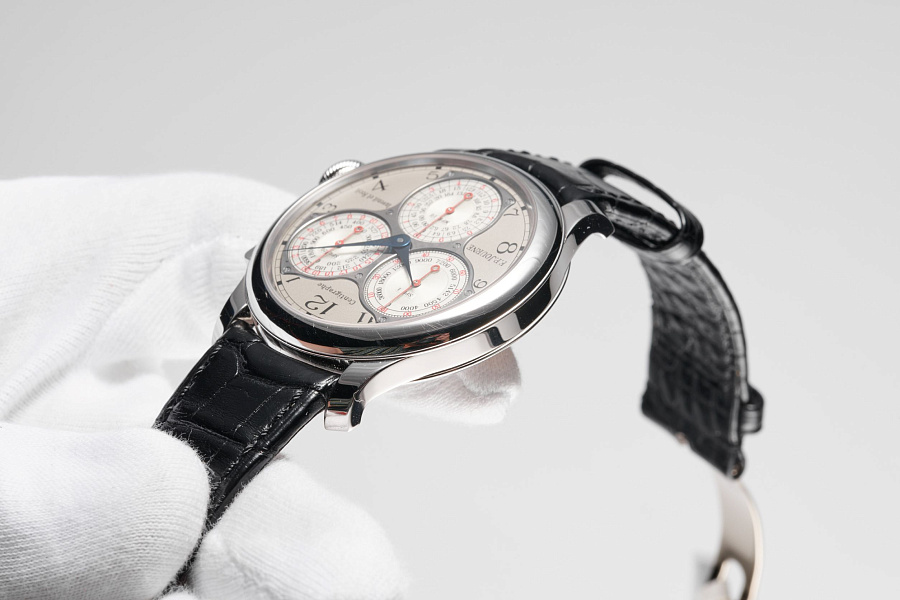 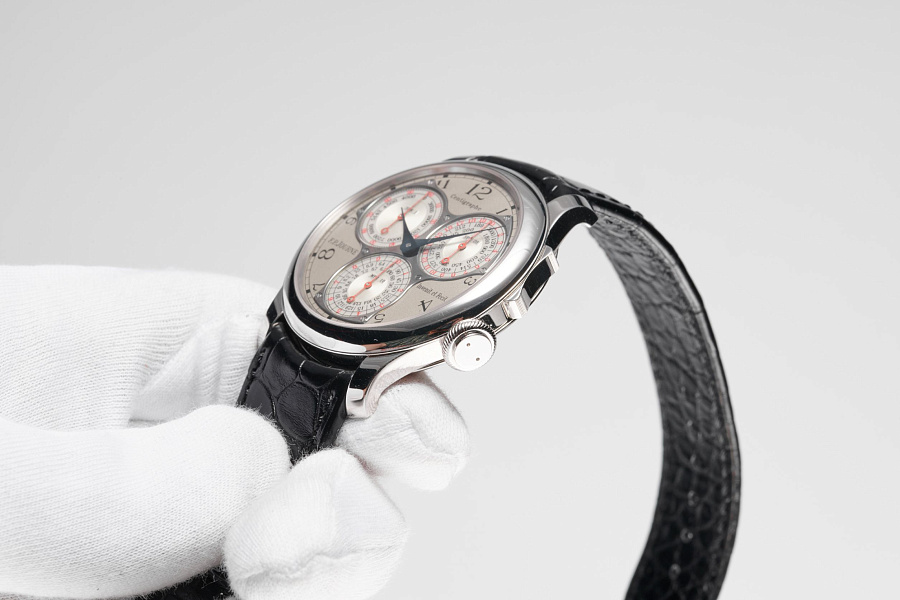 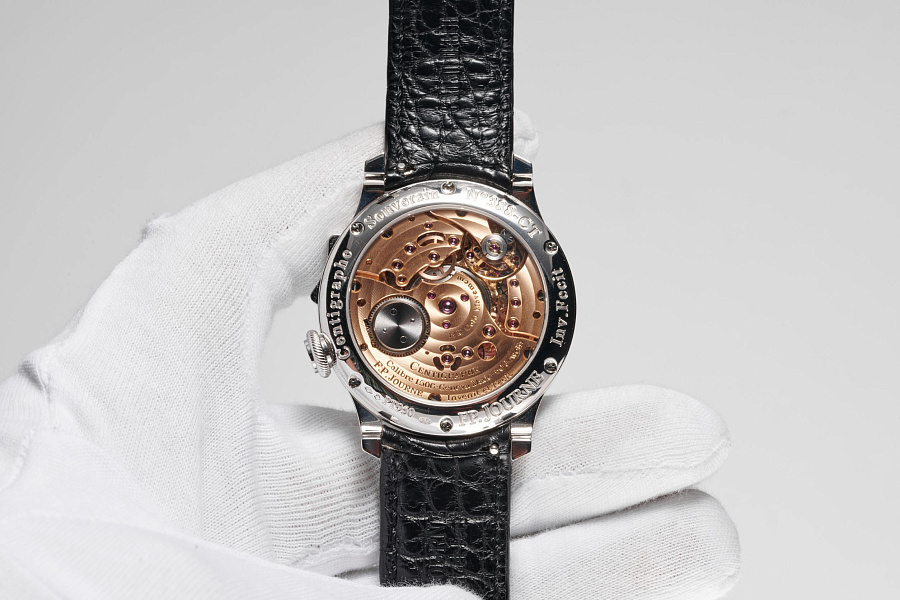 The story goes that the starting point for the development of this unique chronograph movement, which has a seconds counter that rotates in one second and is theoretically capable of registering time intervals with an accuracy approaching a hundredth of a second, was a conversation between François-Paul Journe and Jean Todt (then executive director of Scuderia Ferrari). Caliber 1506 is a kind of mechanical trick invented by François-Paul Journe following this conversation. The balance, operating at a frequency of 21,600 vph, causes the gear system of the movement, both the base caliber and the chronograph, to move in 1/6 second jumps. In caliber 1506, the chronograph is designed in such a way that the fastest seconds hand – also called lightning (foudroyante) – generally moves in 1/6 second increments. However, stopping the chronograph at a certain point in time can theoretically lead to the measurement of time intervals with a smaller increment, down to 1/100 of a second. Modern chronographs with a foudroyante seconds counter are extremely rare, and François-Paul Journe’s design with three counters and no other additional features is definitely unique. The beauty of the concept and the high quality of execution were recognized by the professional community – in 2008 the Centigraphe Souverain received the Aiguille d’Or, main prize at the Geneva Grand Prix d’Horlogerie.

At the 10 o’clock position, the 1/100-second hand revolves in one second, on a scale marked in hundredths of a second. The sub-dial is equipped with a tachymeter scale that permits the reading of subject speeds up to 36,000 kilometers per hour. The subsidiary-hand at 2 o’clock revolves once every twenty seconds, with the scale divided into seconds and a tachymeter scale from 189 to 3600 km/h. The third sub-dial, at the 6 o’clock position, is graduated for 10 minutes, with a tachymeter scale from 6 to 180 km/h. To start, stop and reset the chronograph counters there is a rocker pusher located on the caseband at 2 o’clock, instead of the usual pushers on the sides of the crown. The idea behind it had never been used in the industry, hence why François-Paul Journe patented it.

The winning combination of the present lot is manifested in the solid-gold movement, fine platinum case, solid white gold dial and rare platinum F.P. Journe adjustable folding clasp, collectible in its own right and created in collaboration with Roland Iten, the inventor of the most complex mechanical clasps.

The F. P. Journe Centigraphe Souverain is equipped with a hand-wound 1506 caliber. The movement is finished to a high standard with manual decoration of all parts, including chamfering and polishing. The mainplate is decorated with a Perlage pattern, while the bridges feature a côtes circulaires decoration. The peculiarity of the F. P. Journe movements is that since 2004 they have been produced from solid 18k pink gold, so that no protective coatings are required to create a flawless and non-patinated finish of the parts.

The F. P. Journe Centigraphe Souverain Ref. CT, characterised by its rare original execution, and distinctive yet modest design, is considered to be one of the most sought-after F.P. Journe watches. Therefore, the present lot would appear to be an extremely attractive purchase for the collector and F. P. Journe watchmaking expertise aficionado, who will receive an elegant, extraordinary and rare mechanical chronograph wristwatch from this famous independent watch brand, one of the undoubted leaders in the haute horlogerie watch market. The winning combination of the present lot is manifested in the solid-gold movement, fine platinum case, solid white gold dial and rare platinum F.P. Journe adjustable folding clasp, collectible in its own right and created in collaboration with Roland Iten, the inventor of the most complex mechanical clasps.