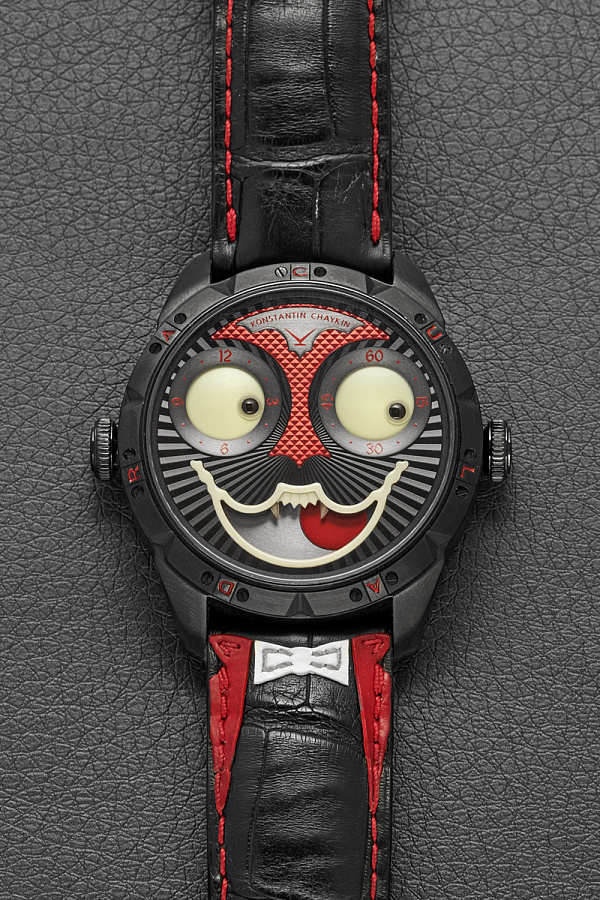 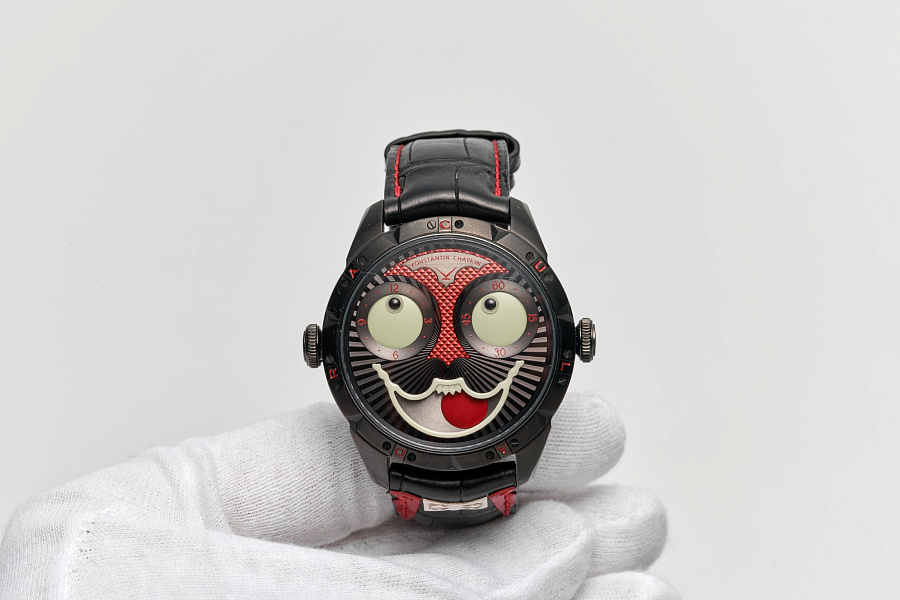 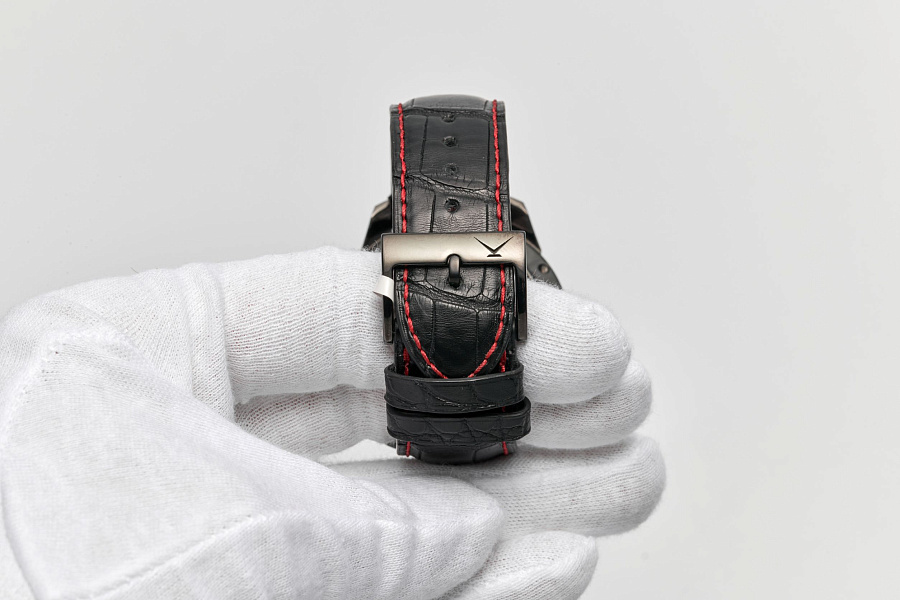 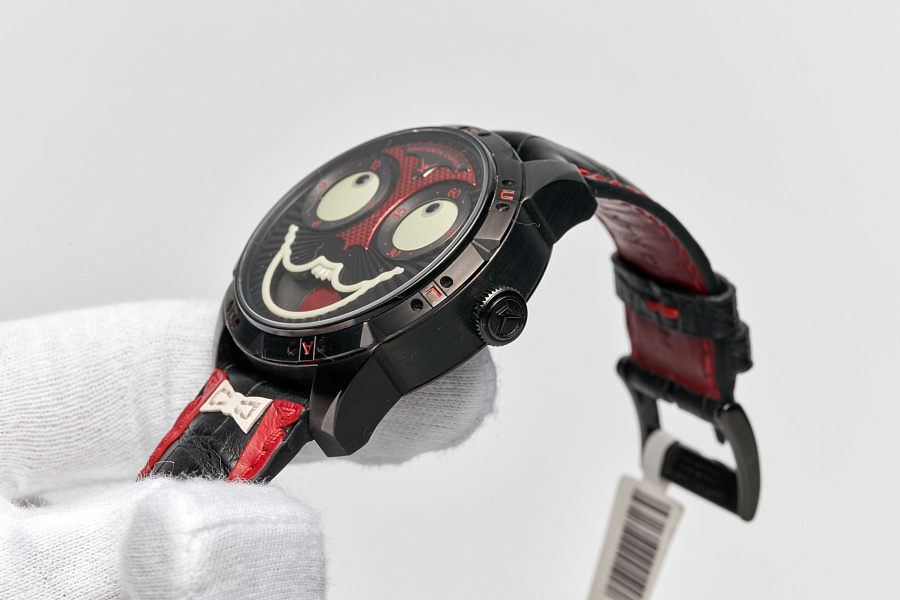 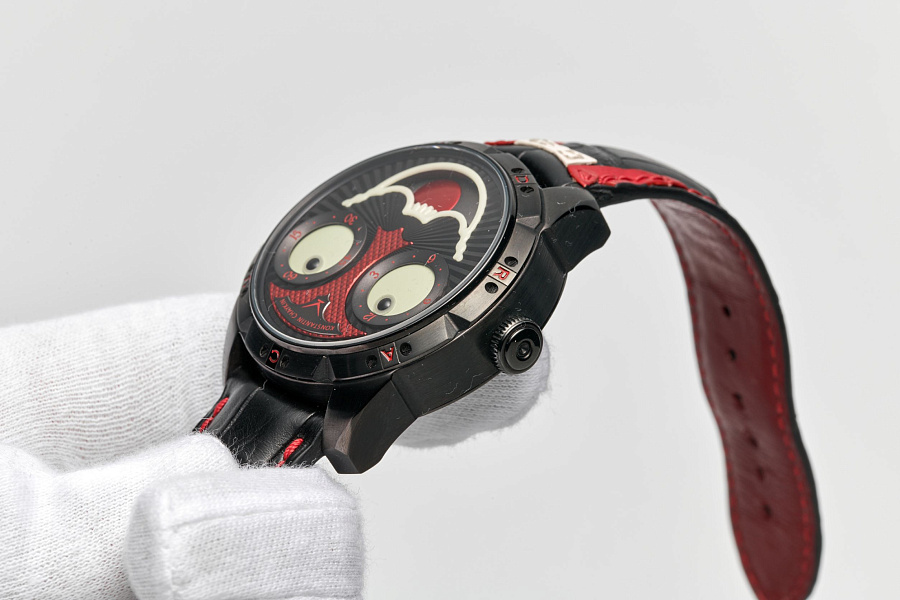 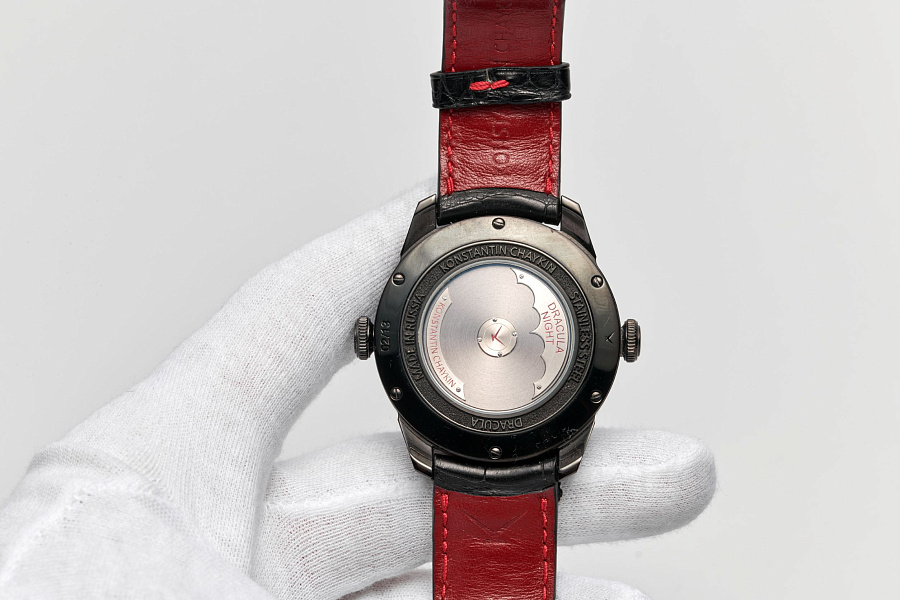 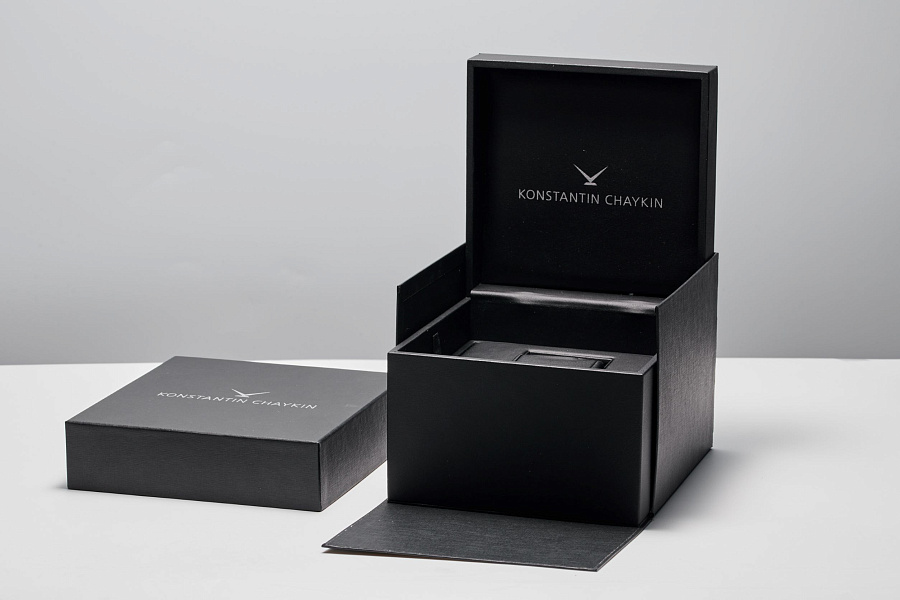 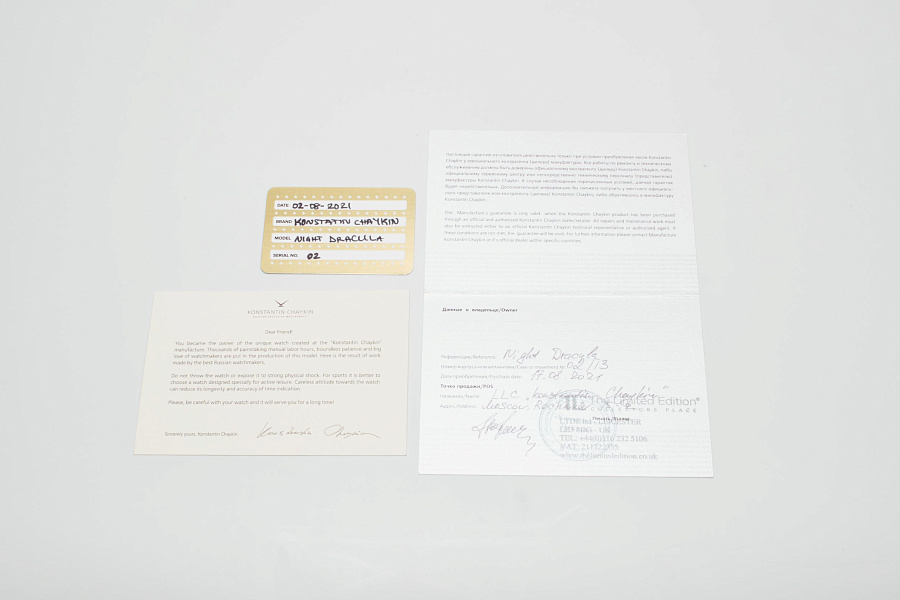 The present example is powered by the self-winding caliber К.18-7, developed by Konstantin Chaykin in 2018 for the original Dracula model. The ‘Dracula time’ indication is highly unusual, functioning by means of mechanical vampire fangs – appearing shortly before midnight, they gain full length around 1 a.m., begin to retract at about 3:40 a.m., and completely disappear at half past five. Unusual features of this design are the details of the shaped rims of the smiling mouth (the moonphase indicator) and the pupils of the character’s eyes (the hours and minutes indicators), made of a monolithic luminous composite developed and produced by Konstantin Chaykin.

The characteristic feature of this watch and its caliber is its unique design with an anthropomorphic Joker-indication, with disc indicators for the hours, minutes and moon phase, with the addition of a one-of-a-kind ‘Dracula time’ feature.

For this caliber, Konstantin Chaykin complicated the Joker-indication module by adding a mechanism that sets the vampire’s fangs in motion. Its operation is similar to the day/night indicator, but the times it functions are altered. Caliber K.18-7 is the first sophisticated version of the original Joker-indication caliber K.07-0, created for Joker watches in 2017. The brand produced only two limited editions – the original Dracula model (13 pieces) and this limited edition (13 pieces), and also released several unique copies of other versions.

The characteristic feature of this watch and its caliber is its unique design with an anthropomorphic Joker-indication, with disc indicators for the hours, minutes and moon phase, with the addition of a one-of-a-kind ‘Dracula time’ feature. The hour and minute subdials look like the character’s eyes, the moonphase indicator resembles a pumpkin lantern’s smiling mouth, and vampire fangs appear and disappear serving as the ‘Dracula time’ indicator. Every minute, the position of the hour and minute subdials changes, combined with the smiling moonphase display changing its position every day, making a somewhat aggressive, slightly scary but undoubtedly cute image when the vampire fangs appear at night. That’s why the Wristmon’s face-like dial constantly expresses a new emotion.

Konstantin Chaykin works on his collection like an artist, striving to embody in it fresh technical, design or philosophical ideas. That is why he does not intend to fill the market with countless possible colour variations of the Joker watch, and also why the appearance of a truly new model is an excellent and very rare chance for a collector to acquire their own Wristmon. The one-of-a-kind design of the face-like dial is the main feature of both the Night Dracula watch and other Wristmons from Konstantin Chaykin, and for this reason they are considered one of the most emotional, memorable and notable watches in the modern watch industry.

The Konstantin Chaykin Night Dracula Special Edition would appear to be an extremely attractive purchase for the collector looking to obtain a highly unusual, sophisticated and emotional mechanical wristwatch from a renowned independent watchmaker, a member of the respected AHCI – Académie Horlogère des Créateurs Indépendants. The combination of the extraordinary design, memorable and instantly recognizable appearance and haute horlogerie execution and finishing undoubtedly adds to the appeal of this lot. Moreover, this is undeniably an ingenious watch with a strong and distinctive character, and therefore it would also be an incredibly attractive daily wearer.