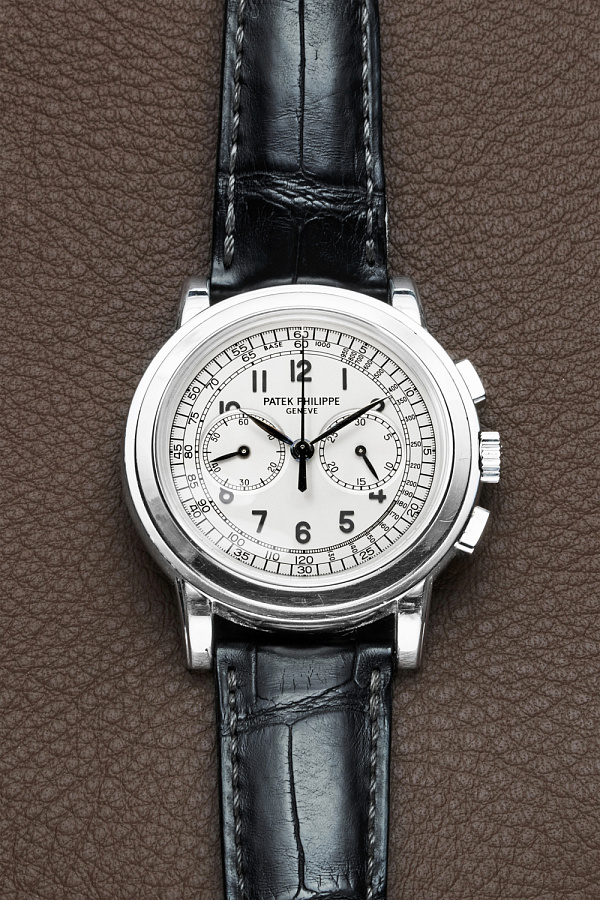 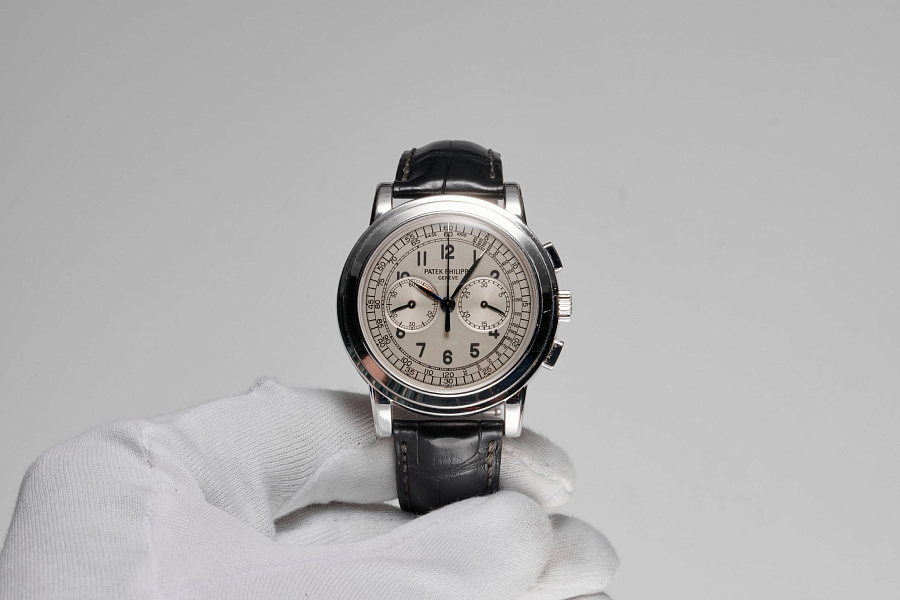 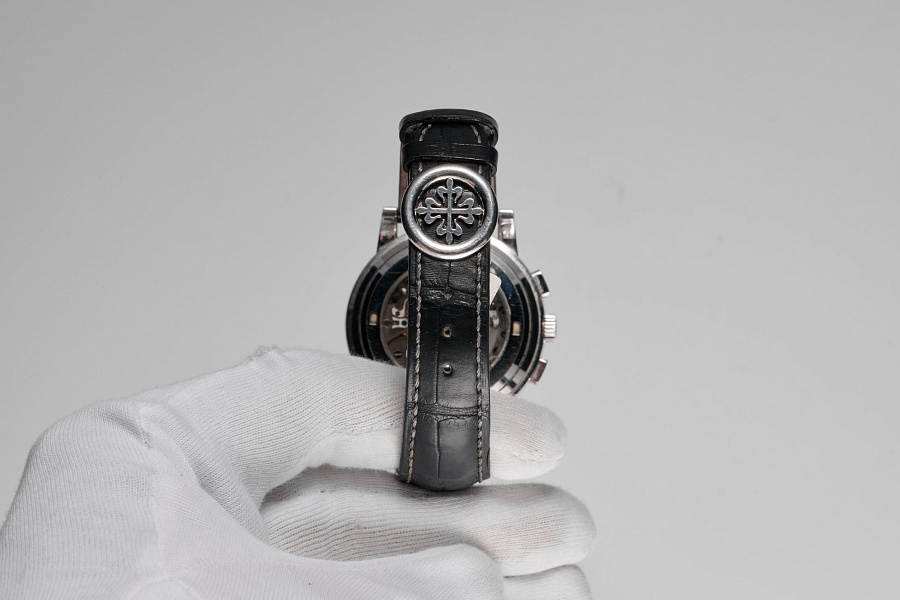 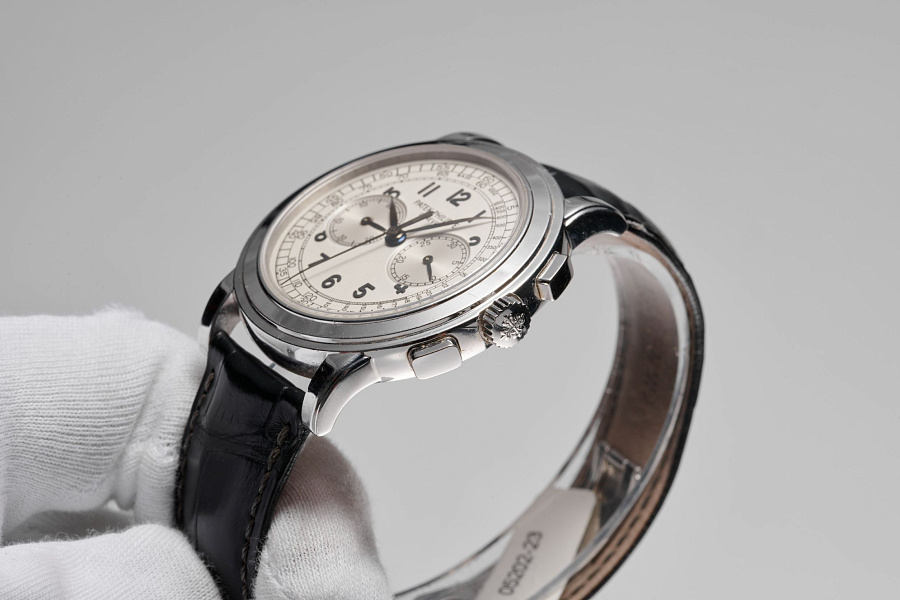 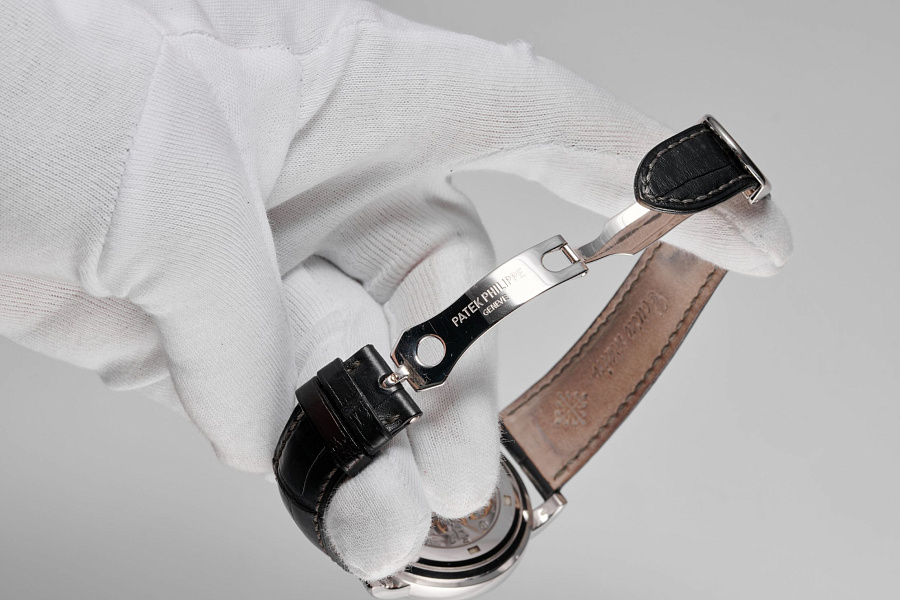 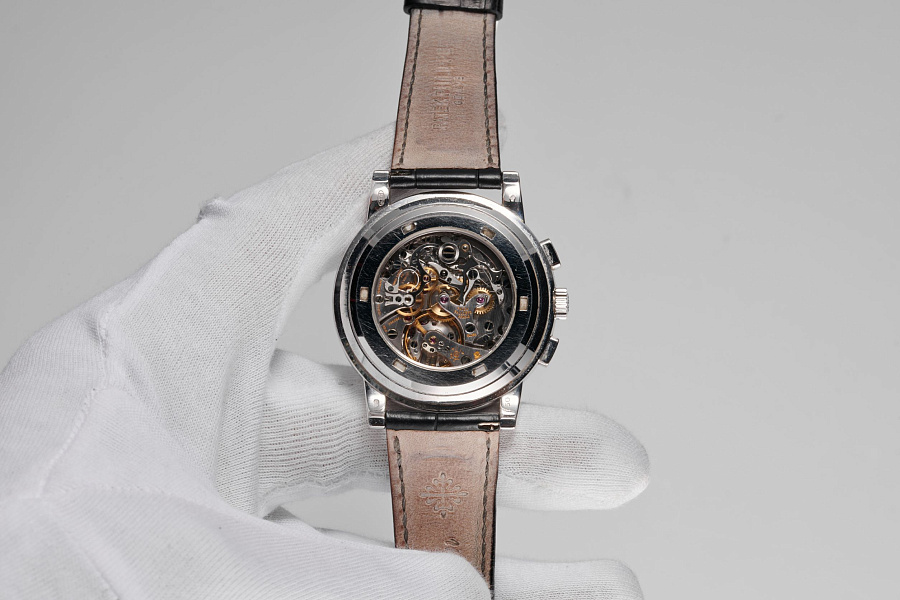 Patek Philippe is considered to be the producer of the most elaborate, refined and collectible chronograph wristwatches. For early chronograph wristwatches, Patek Philippe purchased Valjoux movement-blanks, while in the 1980s there was a transition from using Valjoux to Nouvelle Lémania movement-blanks, namely to the traditionally designed hand-wound caliber 2310 with a lateral clutch system, column wheel and substantial 60-hour power reserve. The 2310 was largely redesigned to match the specifications of the brand, and also to comply with the requirements of the prestigious Geneva hallmark (Poinçon de Genève), which prior to 2009 marked almost all Patek Philippe calibers, including that of the present example. Caliber CH 27-70, the result of this alteration, is considered to be the most outstanding both in terms of the fine finishing of all parts of the movement and the aesthetics of the design. Prior to 1998, Caliber CH 27-70 was used as the base caliber for complications watches, most notably the Ref. 3970 chronograph and perpetual calendar. Ref. 5070, launched in 1998, was the first chronograph-only Patek Philippe wristwatch powered by caliber CH 27-70. In general, the use of the Nouvelle Lémania-based caliber CH 27-70 was discontinued in 2010 with the cessation of the production of reference 5070 and the transition to reference 5170, which was powered by the newly developed in-house caliber CH 29-535 PS.

The Ref. 5070 design was developed in homage to the unique, historical, oversized 46mm reference 2512 split-chronograph manufactured in 1950, now exhibited in the Patek Philippe Museum in Geneva. The 5070 dial design reproduces the hallmarks of the split-chronograph reference 2512 dial with almost absolute meticulousness, including a tachymeter scale with an unusually high limit of 950 km/h. Moreover, for the first 5070 version with a yellow gold case, the black dial colour of the 2512 was chosen. The diameter of the reference 5070 case was 42mm – a very large size for the brand’s collection in 1998, although it was much smaller than the 46mm case of the prototype reference 2512. The unique character of the watch was also given by the wide stepped bezel, which eliminated the contradiction between the large case and the relatively close location of the counters. The dial is classically understated in the spirit of the golden era of art deco, the 1930s. The inclusion of a tachymeter scale and railway-styled minute track perfectly fits the image and the epoch.

The Ref. 5070 design was developed in homage to the unique, historical, oversized 46mm reference 2512 split-chronograph manufactured in 1950, now exhibited in the Patek Philippe Museum in Geneva.

Overall, reference 5070 is perceived as well balanced, while the many pleasing details that complement the caliber’s highest level of design and workmanship ensure the watch has a very high degree of perceived value. Now this watch is certainly one of the most desirable acquisitions for a discerning collector and connoisseur.

The present watch is undoubtedly recognizable. The 42mm white-gold case corresponds to modern tastes and looks beautiful. The technically well-marked 1930s-style dial is definitely perceived as a high classic of the genre. The undoubted advantage of the 5070 is the fantastically attractive chronograph movement, which is visible through the sapphire caseback. Patek Philippe is one of the best craftsmen in the design and traditional artisanal finishing of chronograph calibers, ensuring each piece is valuable as a masterpiece of high horological art. Therefore, the Patek Philippe Chronograph Ref. 5070G-001 would appear to be a fine purchase for the collector looking for an exquisite Poinçon de Genève-hallmarked chronograph wristwatch of a legendary classic design from a world-famous watch brand, the market leader in haute horlogerie and complicated timepieces.