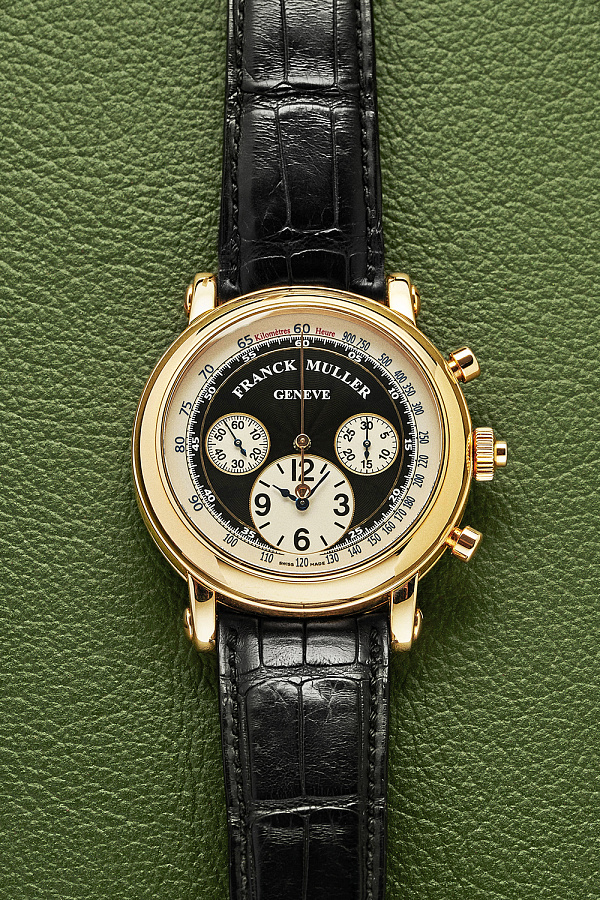 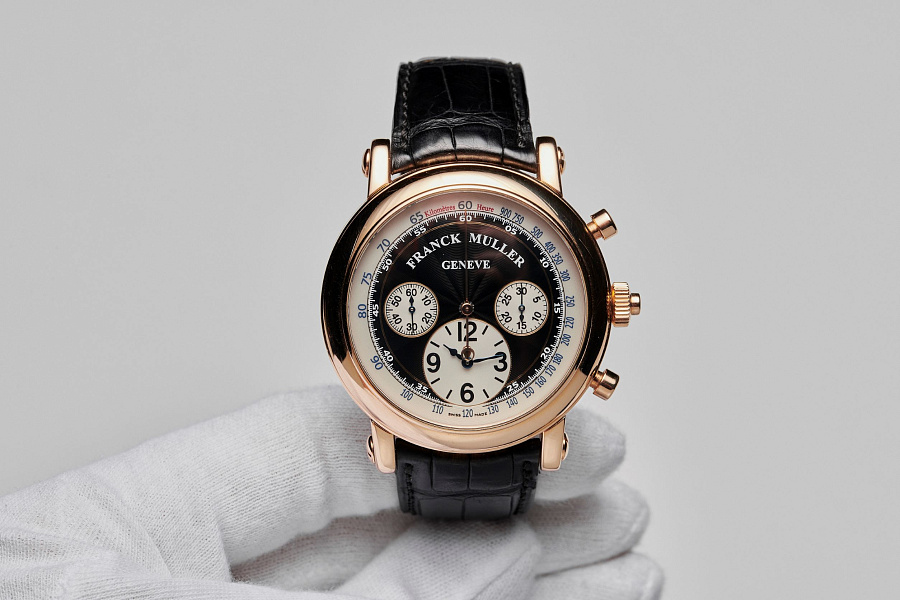 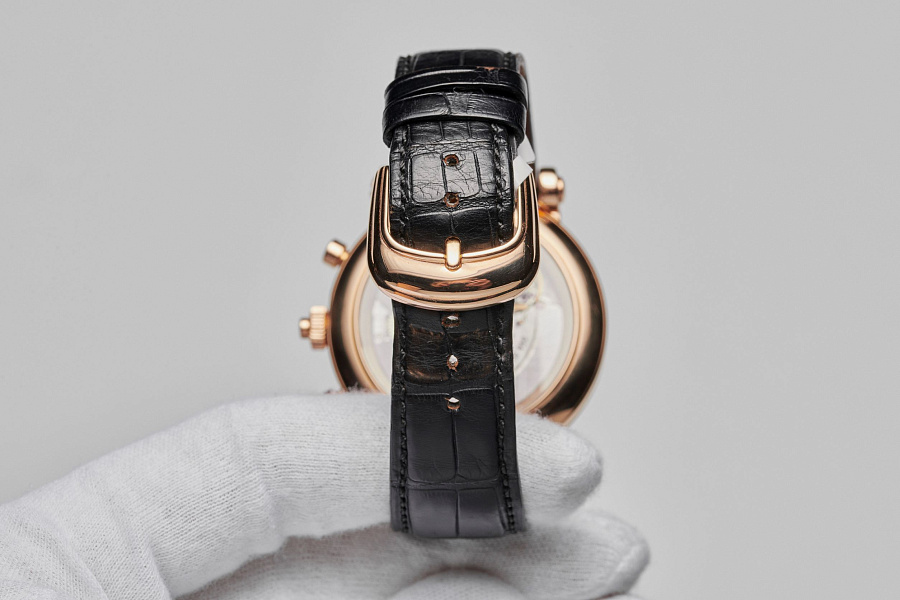 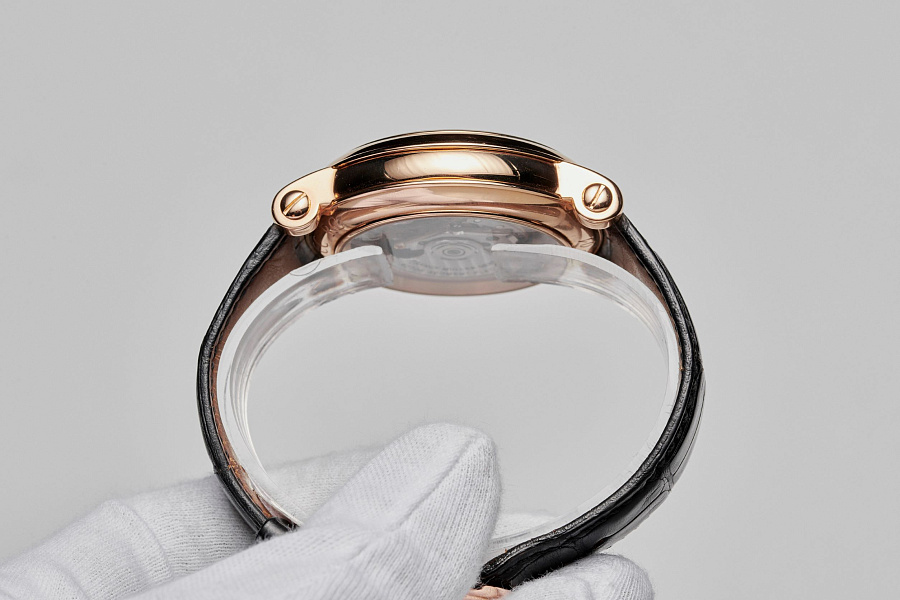 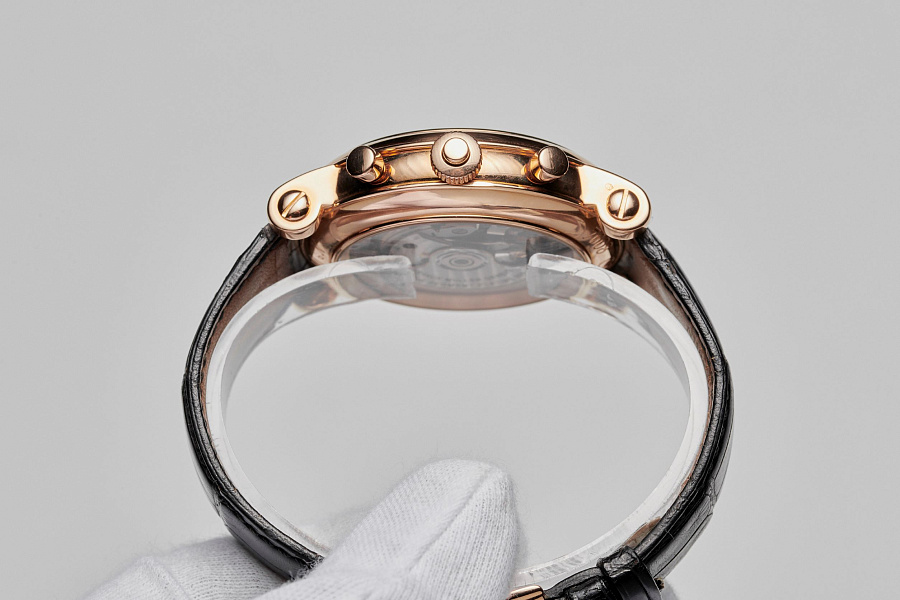 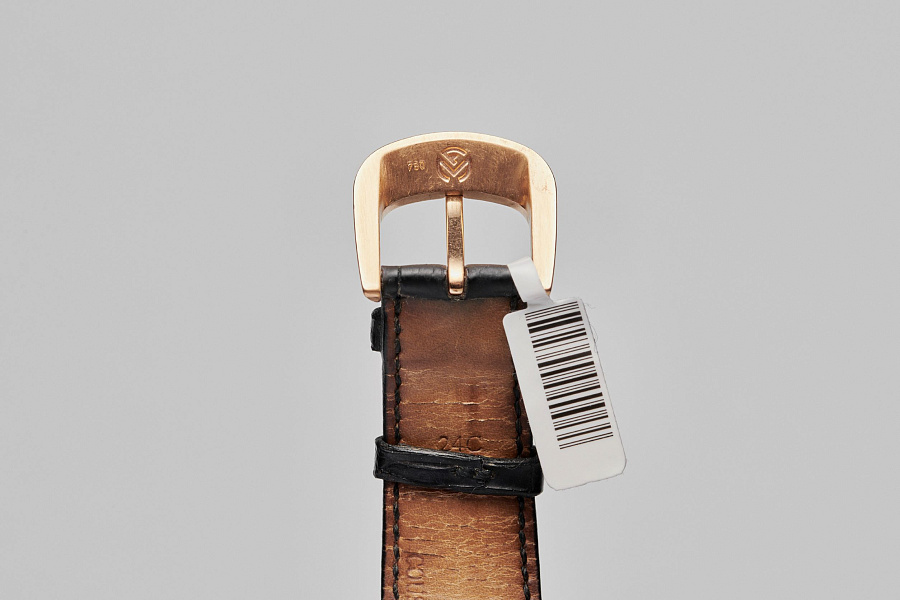 Franck Muller is one of the first Swiss watchmakers of the new era, founding his own watch brand in 1991. From the very beginning of his career he showed extraordinary ingenuity, creating a series of complicated and super-complicated wristwatches, while his brand is also notable for some key design breakthroughs. In particular, he achieved recognition as the earliest proponent in the cultivation of the vintage style – this he practiced back in the 1990s, long before the style began to dominate the entire industry in the 2010s.

This reference undoubtedly belongs to the vintage-styles category, the appearance of which in the collection of the brand is not accidental. In a variety of situations, Frank Muller has demonstrated an excellent knowledge of the history of the development of complications. In the design of this reference, as well as several other similar references from the brand’s collection, allusion can be made to Breguet’s historic fundamental design, the pre-chronograph observation watch No. 4009 featuring two independent central seconds hands (sold in 1825). Abraham-Louis Breguet often set the main hands to the sub-dial, as in this case.

The single-sided present lot, with its black and white ‘reversed panda’ dial, main sub-dial at 6 o’clock, 44mm rose gold case, and coaxial pusher is one of the rarest execution types.

Franck Muller began his career as a master of complex mechanical watches, and his complications often included models with functions rarely found in other brands. This reference is equipped with one such complication. The caliber FM 7000 of the present reference is based on a modified Eta/Valjoux caliber 7753 without calendar indications and with added under-dial split-seconds mechanisms. Franck Muller also replaced the heavy tungsten segment of the rotor with a platinum segment. It is interesting to note that this caliber has been used by the Franck Muller brand since its early days, from at least 1992.

It is important to note that Franck Muller developed six basic designs for this caliber from the outset, with central or off-centre main hands, a split-seconds pusher at 8 o’clock or a co-axial crown pusher, and in a single-side design or in a ‘double face’ double-sided design with multi-scales on the supplementary dial of the caseback. Early period references feature Roman numerals on the chapter ring, while later releases have military-style Arabic numerals. Among the three main references – 7000 CC RC, 7002 CC RC and 7008 CC RC, the last one offers the largest case diameter of 44mm (instead of 39mm and 42mm of the 7000 and 7002 references, respectively). The present reference 7008 CC RC, according to our knowledge, belongs to the latest generation of the Franck Muller Chronograph Rattrapante, produced circa 2010, and it is extremely rare on the market.

The single-sided present lot, with its black and white ‘reversed panda’ dial, main sub-dial at 6 o’clock, 44mm rose gold case, and coaxial pusher is one of the rarest execution types. It is more common to find on the market instances of alternative versions made of stainless steel, with a single-colour dial (mostly white silver-plated), double-sided design and with central main hands. Therefore, the Franck Muller Chronograph Rattrapante Ref. 7008 CC RC No.01 appears to be an excellent purchase for the collector who desires an extremely rare, unusual and impressive split-chronograph wristwatch from a world-renowned watch brand, famous for its vintage-inspired designs. The present lot represents the last chapter of the fascinating history of Franck Muller split-seconds chronographs, spanning from 1992 to circa 2010. In our opinion, this topic is one of the most attractive if we consider the collecting of Franck Muller watches, or rare and unusual chronographs. The fact this is No. 01 of a numbered series makes the present lot even more attractive.