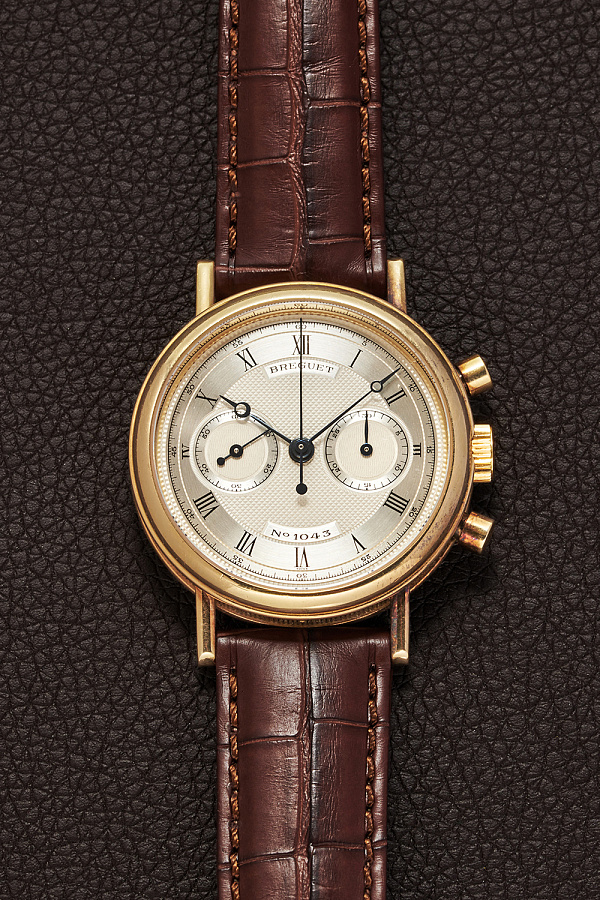 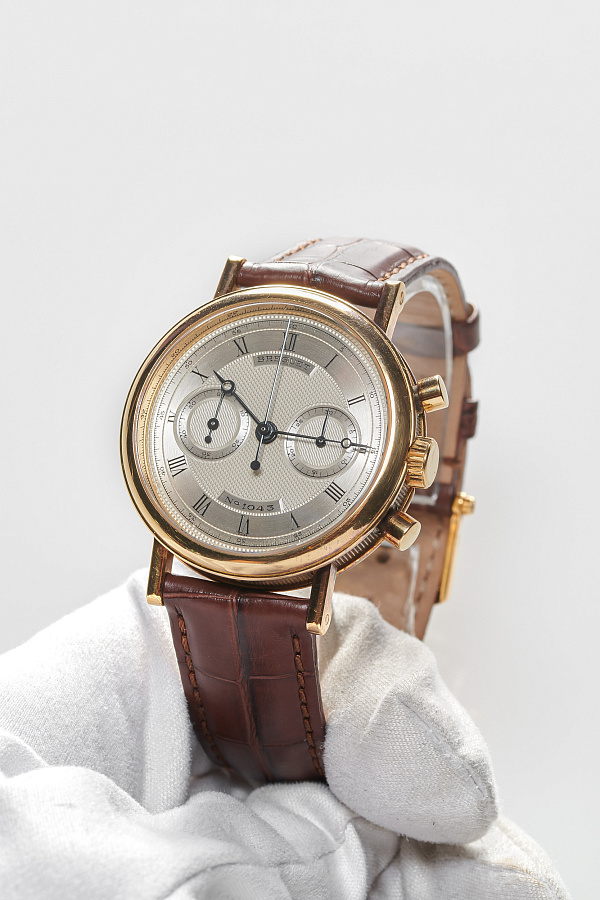 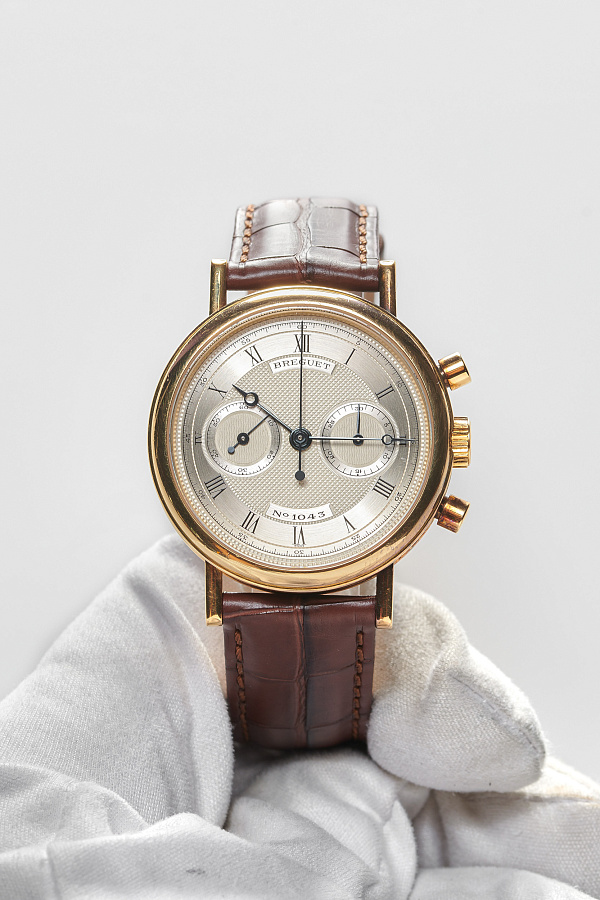 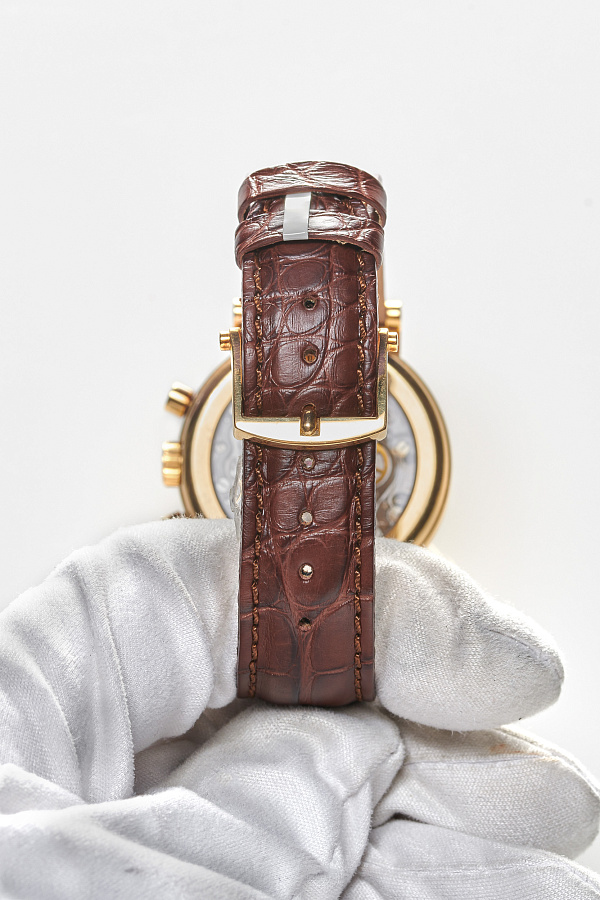 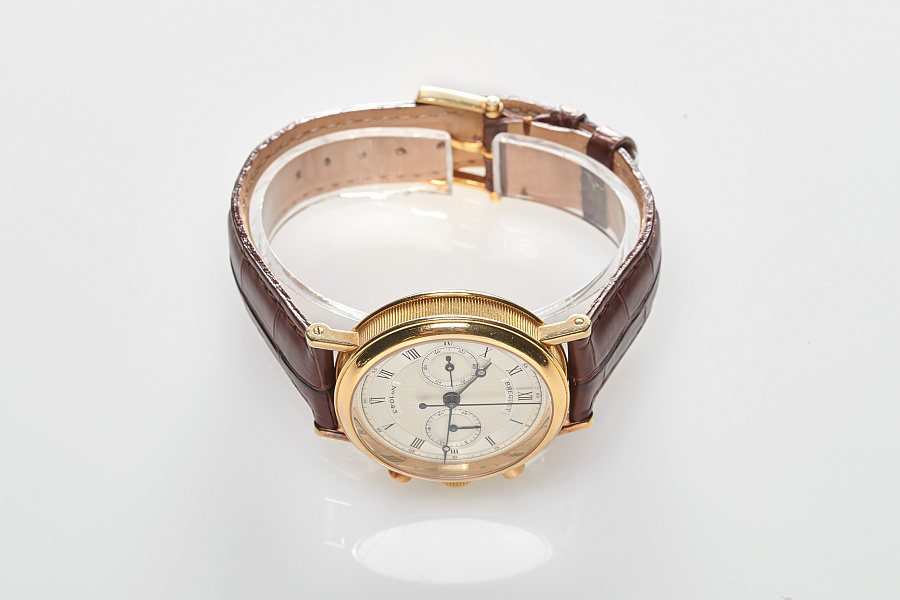 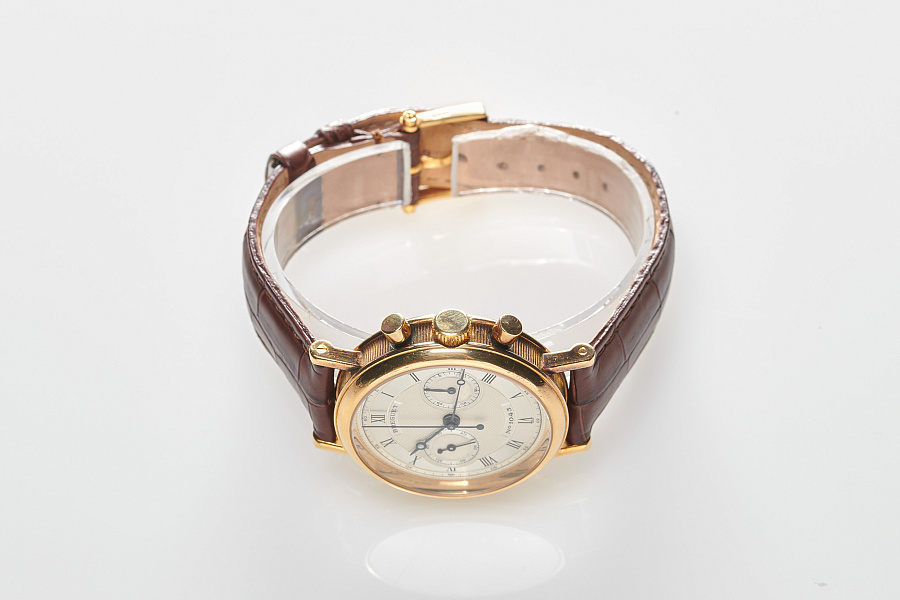 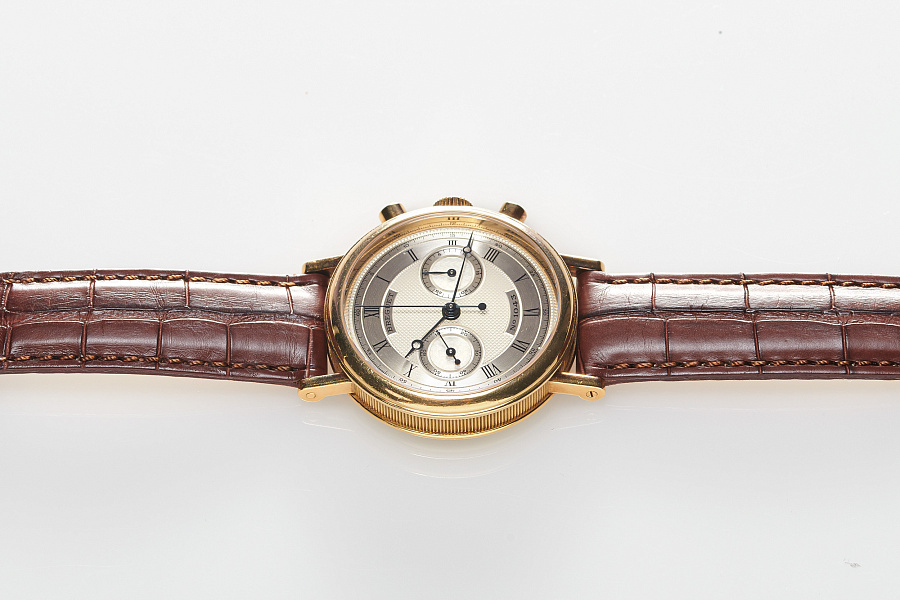 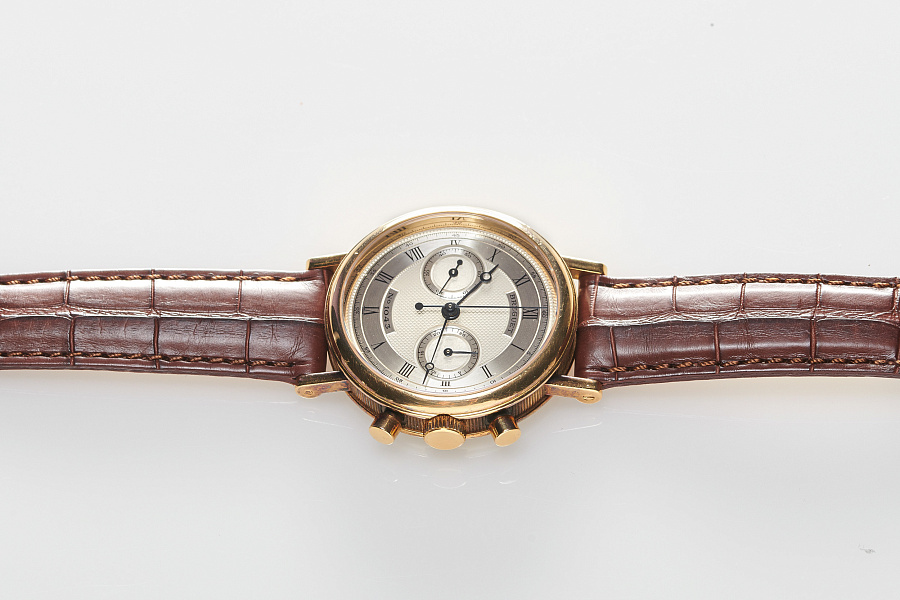 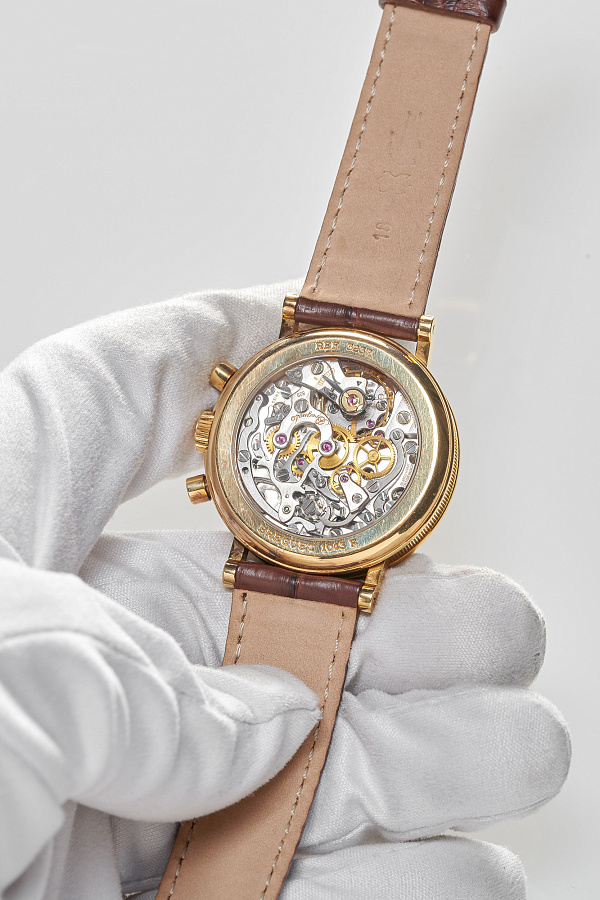 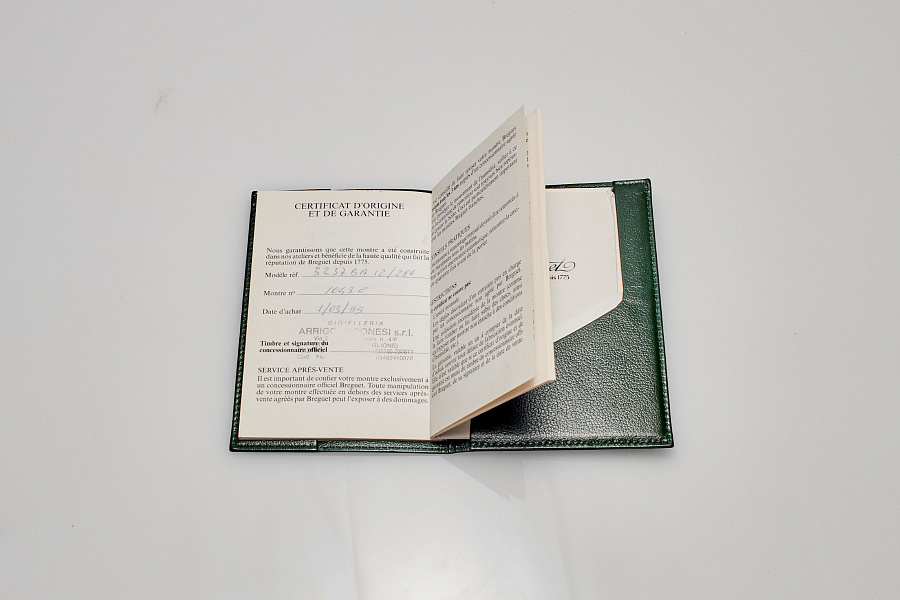 The Classique Chronograph Ref. 3237 is one of the finest collectible chronographs of the modern era. The classic Breguet signature round case is complemented by a mechanical caliber with a traditional lateral clutch, column wheel and beautifully curved levers and flat springs. Breguet Chronograph references 3230 (the initial Classique Chronograph reference, mostly supplied with a solid caseback) and the present 3237 (with a sapphire caseback) with 36mm case and fine engine-turned (guilloche) silvered gold dials are among the earliest models, produced by Breguet under the ownership of the Chaumet brothers (1970–1988). Ref. 3230/3237 was one of Breguet master watchmaker Daniel Roth’s projects during his time at Breguet, and it shows a set of design details carefully selected by Daniel Roth that today are perceived as classic Breguet style. This includes a round case with a polished bezel and caseback rim, a case ring with a crisp vertical knurling similar to that of a metal coin, a guilloché solid-gold and silver-plated dial with blued steel Breguet-style hands and Roman numerals, straight lugs, and of course a high-end mechanical caliber of a superior design and artistically crafted fine finishing. The watch is powered by the calibre 533, Breguet’s 21-jewel version of the Nouvelle Lémania 2310 movement-blank, also used by Patek Philippe (e.g., in Ref. 5070), Vacheron Constantin (e.g., in Ref. 47111), and by Roger Dubuis in an upgraded form for Ref. 3230/3237 with an index-regulator, swan-neck flat spring and an overcoiled Breguet spiral among other features. This was designated as caliber 533.

The present watch is recognizable as a classical and traditional Breguet chronograph, with three superbly crafted components typical for Breguet watchmaking: the Empire case, gold and silvered guilloché dial, and superb chronograph caliber.

Examples of reference 3237 are very rare compared to Breguet’s self-winding chronographs with date of the Marine and Type XX collections, which, in our opinion, significantly increases the collection attractiveness of this watch. We should also note that during the 3237’s production period, which lasted from the 1980s to the early 2000s, Breguet made constant upgrades. As a result, reference 3237 features numerical varieties, including different types of dial and movement, which obviously require careful study. Reference 3237 was most likely discontinued around 2002, when reference 5237 was launched with a case enlarged from 36mm to 38mm, a modernized dial with horizontal guilloché on the counters, the inscription “Swiss guilloché main” and a double secret signature on both sides of the “12”, and a newer caliber 533.2. This caliber, however, has not undergone significant visible modification. 5237 was replaced in 2008 by the 39mm reference 5247, which received a noticeably upgraded caliber 533.3 with a flat spring fixing the chronograph’s minute counter wheel, a new balance and a Geneva-style fixing part of Breguet spiral. 5247 was discontinued in 2013 when the modern 42.5mm reference 5287 was put into production.

Refs. 3230 and 3237 were produced in yellow gold, rose gold, white gold, and platinum. The present example in yellow gold belongs to the E-series, allowing it to be dated to around the 1990s, most likely to the late 1990s. The caseback rim is engraved with the reference and case numbers, which is typical for production in the 1990s. Other hallmarks of this period include a ‘flat’ crown without a logo, a dial with “Swiss” under the “VI” index, and a caliber with the chronograph Y-bridge engraved with “Breguet” on the centre and the number on the lower part of the bridge.

Overall, reference 3237 is perceived as a well-balanced, classical watch with a brand-specific Empire-style gold case and serene guilloché dial that complement the caliber’s highest level of design and workmanship. These ensure the watch has a very high degree of perceived value. This watch is now certainly one of the most desirable acquisitions for a discerning collector and connoisseur.

The present watch is undoubtedly recognizable as a classical and traditional Breguet chronograph, with three superbly crafted components typical for Breguet watchmaking: the Empire case, gold and silvered guilloché dial, and superb chronograph caliber. That’s why we definitely perceive the present lot as a high classic of the genre. The undoubted advantage of the 3237 is the extremely attractive chronograph movement, which is visible through the sapphire caseback. Therefore, the Breguet Classique Chronograph Ref. 3237 would appear to be a fine purchase for the collector looking for an exquisite chronograph wristwatch of a legendary classic design from a world-famous watch brand, one of the market leaders in haute horlogerie and complicated timepieces.