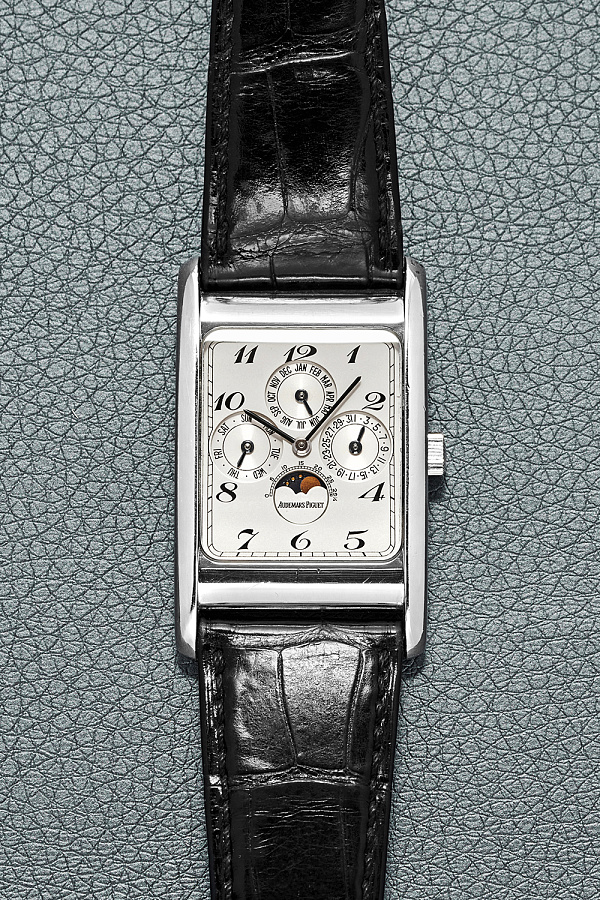 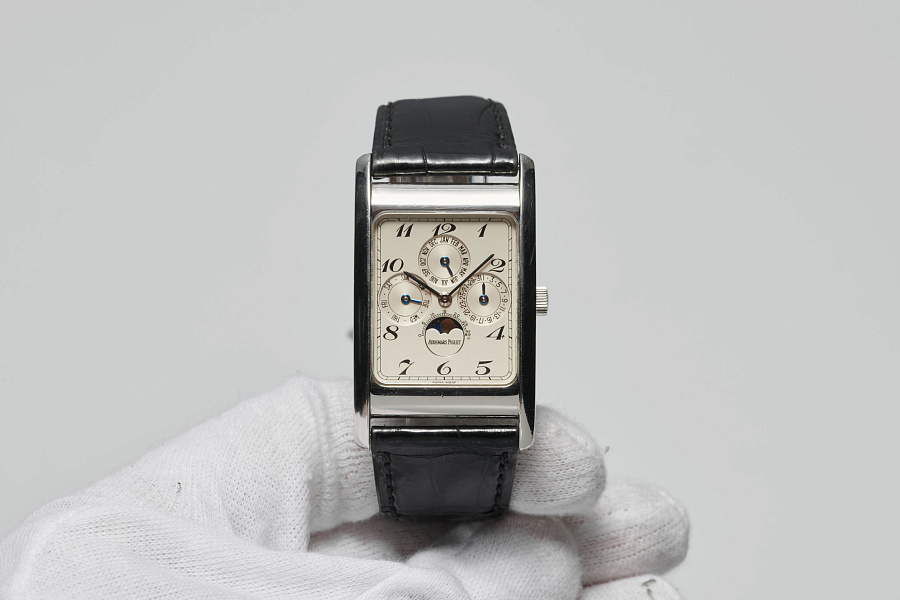 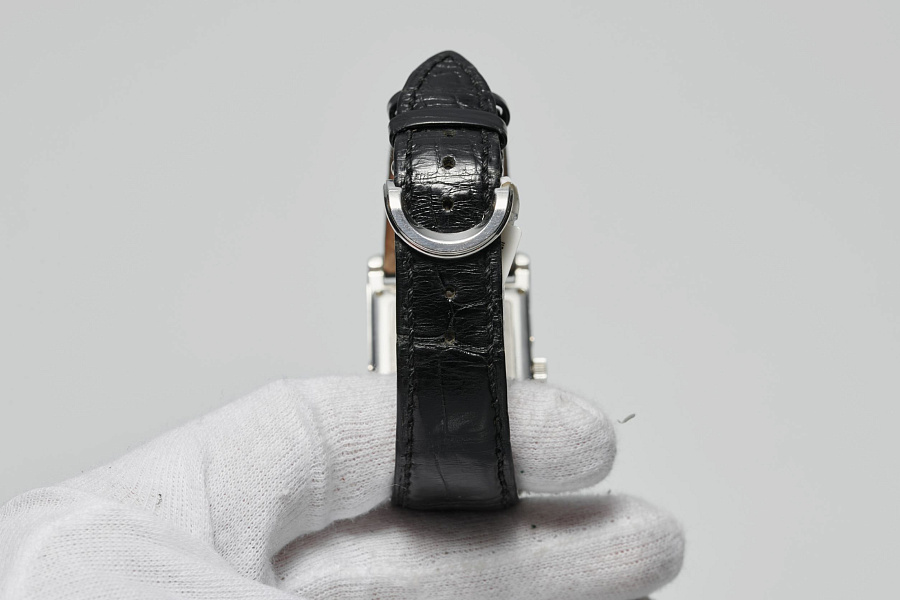 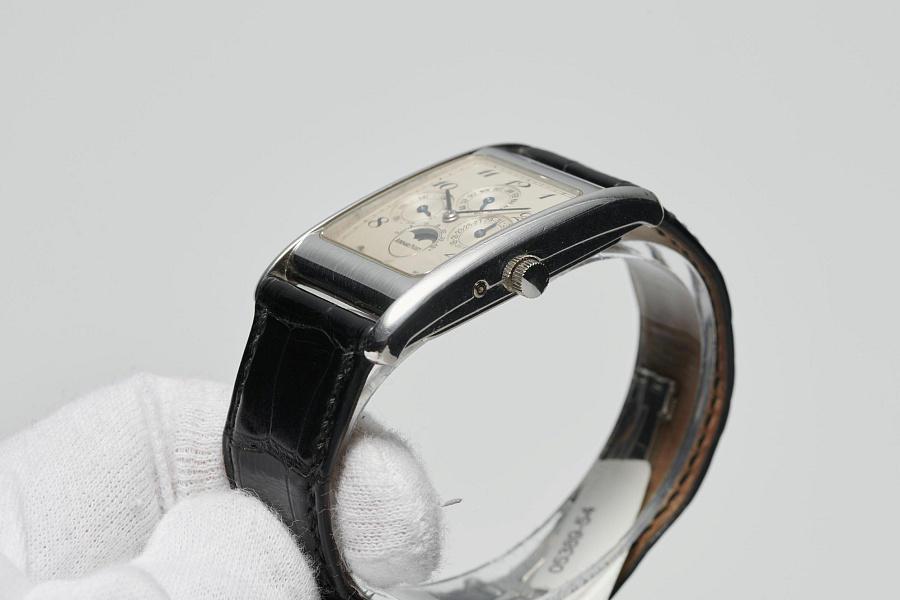 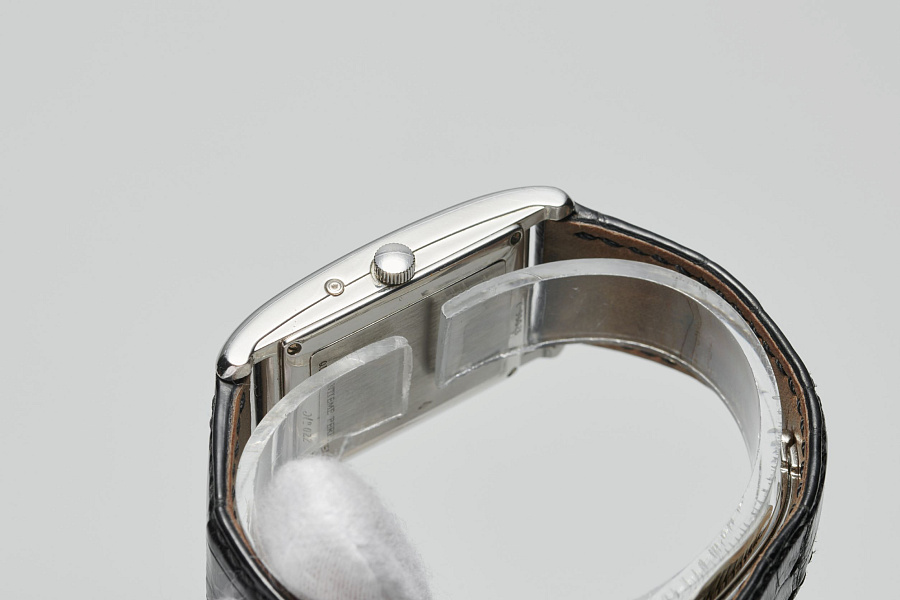 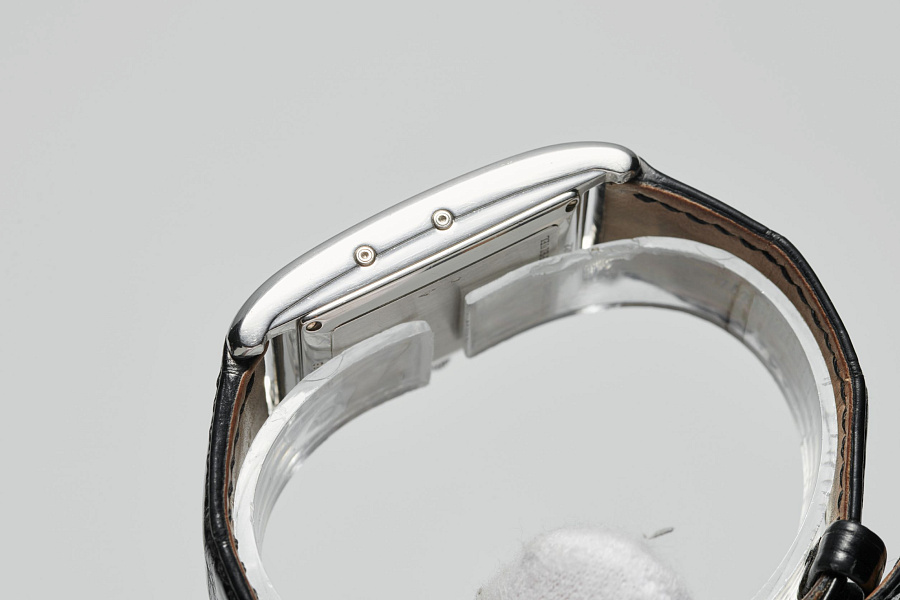 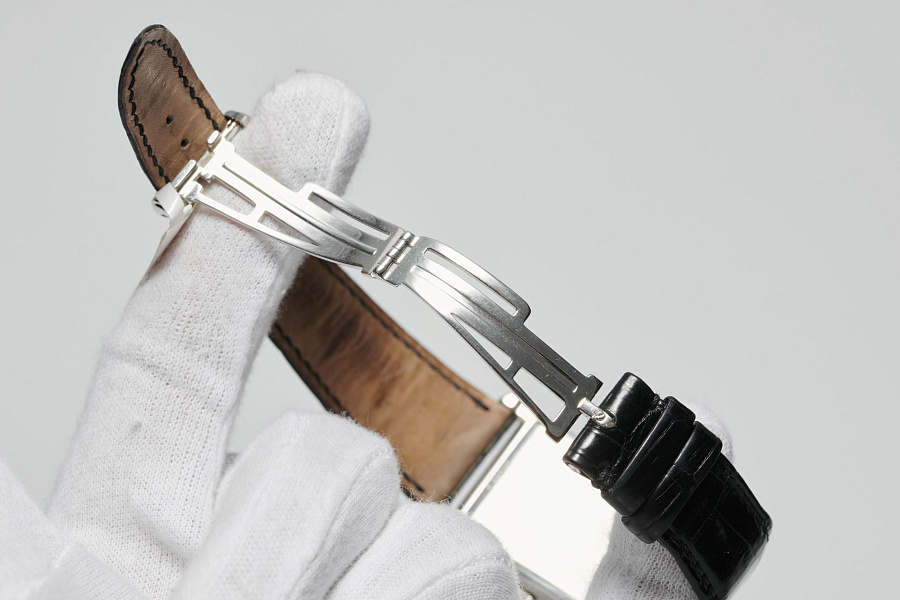 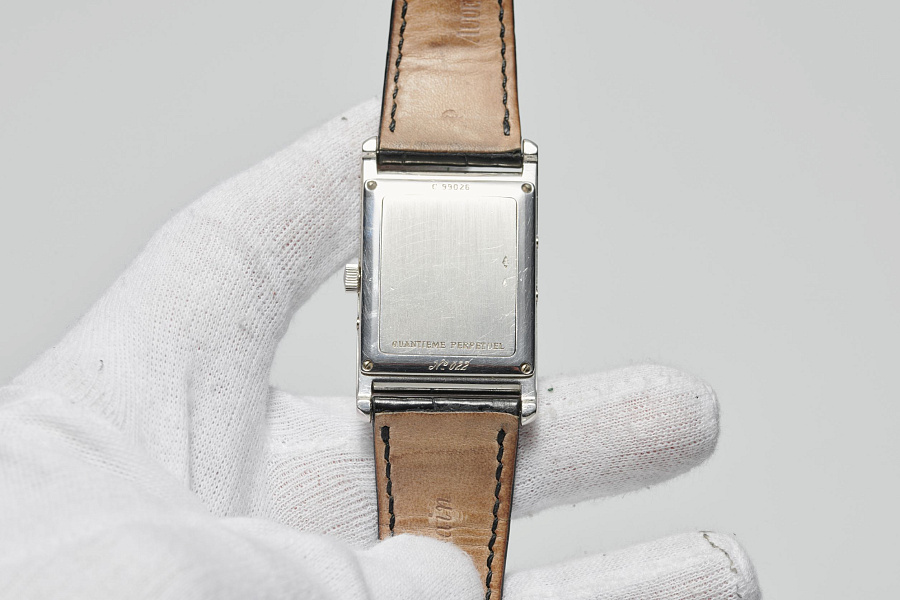 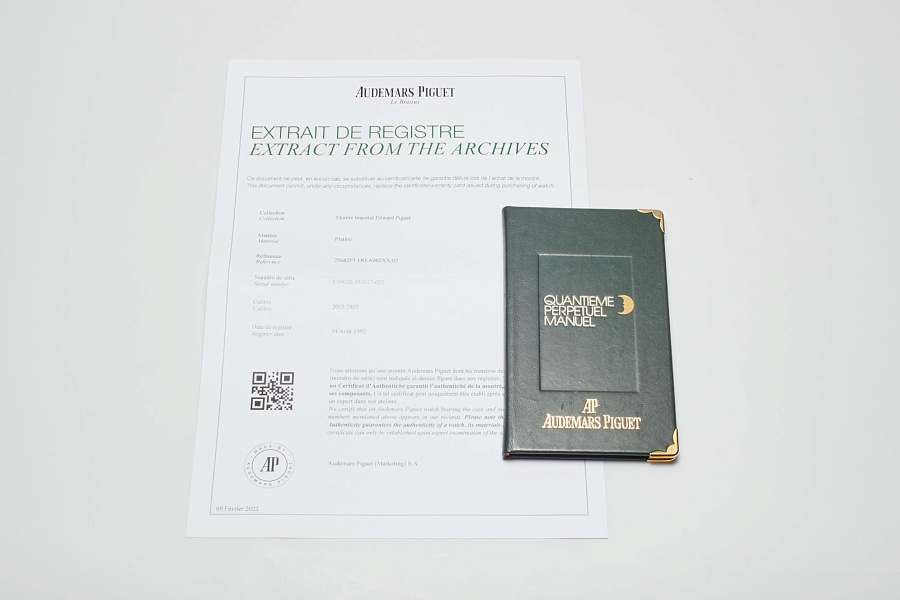 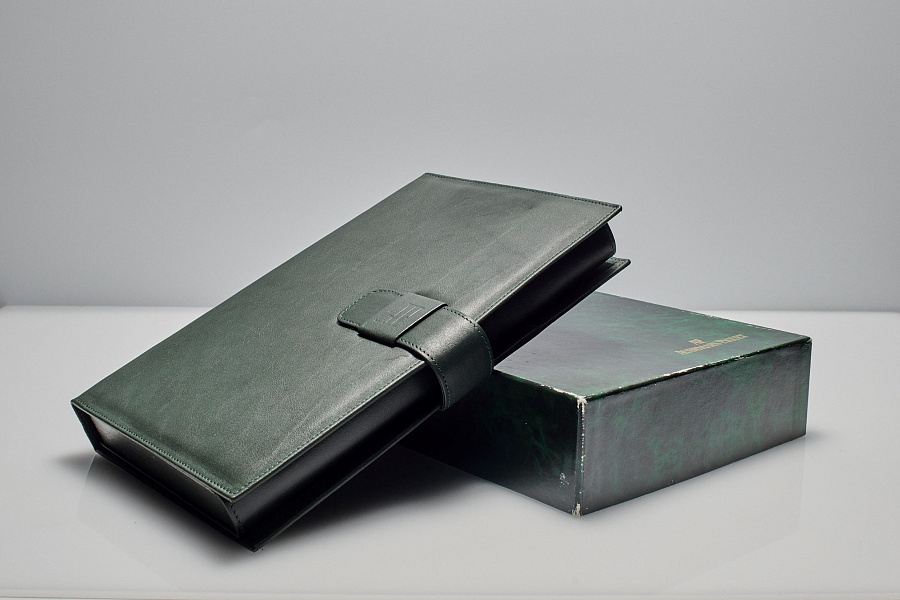 Launched in 1991, Audemars Piguet’s Edward Piguet Quantième Perpétuel Ref. 25682 featured what was at that time the world’s smallest and thinnest perpetual calendar caliber. It was based on the manual winding 2003 caliber, which is just 1.64mm thick. The total thickness of the 2003/2805QP movement is 3.2mm, with a diameter of 23mm. A movement-blank for the 2003 caliber was supplied by Jaeger-LeCoultre, while the perpetual calendar module 2805QP is based on a kit from the Dubois Dépraz factory. Both are long-term partners and suppliers of Audemars Piguet.

Ref. 25682 is regarded as one of the most elegant perpetual calendar watches produced by the company. The historical prototypes of this reference were the early Audemars Piguet calendar wristwatches of the 1920s, which, however, did not have the complication of a perpetual calendar, but were ordinary triple (complete) calendars with the addition of a moonphase indicator. An interesting feature of the present reference is the fact that there is no leap year indicator on its dial, although the perpetual calendar mechanism takes into account the leap year cycle when displaying the date. Therefore, the Ref. 25682 dials very meticulously reproduce the design of Audemars Piguet’s triple calendar wristwatches from the 1920s.

According to our knowledge, this is the only Audemars Piguet rectangular-shaped perpetual calendar reference that was made of platinum 950.

The reference 25682 production span lasted until the 2000s. Watches were usually made from yellow gold or platinum, with far fewer platinum watches being produced. From the very beginning, the brand offered two versions of the dial design. The first featured printed Breguet numerals and leaf-shaped hands, while the second version, more in the Art Deco style, was equipped with stick hands and applied stick indexes. Since the reference was launched in 1991, all models produced before 1993 reveal the so-called ‘small logo’, while models released after 1993, which are rarer, have the new logo in the same place, below the moonphase indicator aperture. It is currently very difficult to collect information on all the varieties produced. It should be noted that a model with a mother-of-pearl dial, leaf-shaped hands and applied gold Breguet numerals has appeared on the market, as well as a D-series late example with a sapphire caseback and finely engraved caliber.

The present example, entered into the register in 1992, offers a highly intriguing dial configuration with stick hands, printed Breguet numerals and the new logo. The presence of the new logo suggests that the dial has been restored, as the 1992 edition should be characterised by the presence of the ‘small logo’.

According to our knowledge, this is the only Audemars Piguet rectangular-shaped perpetual calendar reference that was made of platinum 950.

The Edward Piguet Quantième Perpétuel Ref. 25682PT.OO.A002XX.02 would be a good chance for the collector to purchase an extremely rare, elegant and attractive perpetual calendar watch from a world-renowned traditional watch brand, one of the undisputed leaders in the haute horlogerie watch market. The undoubted advantage of the present watch is the combination of the outstanding features of its manual-winding caliber 2003/2805, one of the slimmest and smallest perpetual calendar movements of modern times, and the splendid and elegant classical design with charismatic Breguet numerals on the dial, which is particular to Audemars Piguet’s Edward Piguet collection. The platinum Ref. 25682PT appears extremely rarely in auctions, which is explained by the very limited production of this model. Therefore, this watch is perceived as an extremely promising collectible.