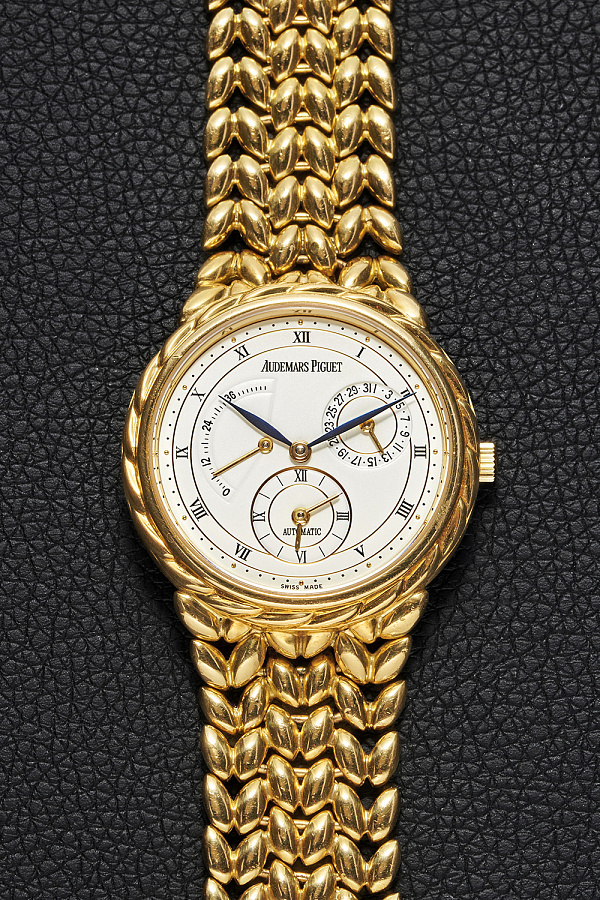 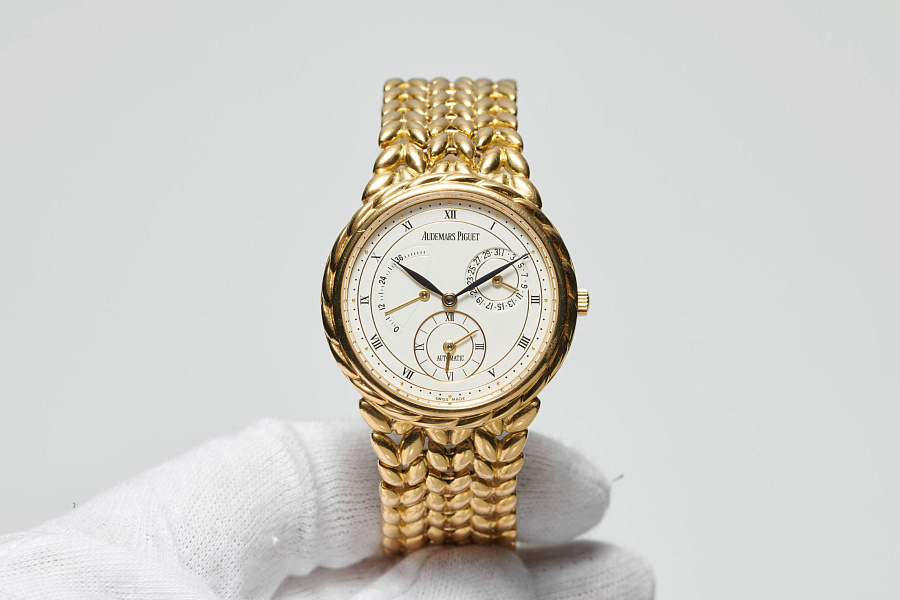 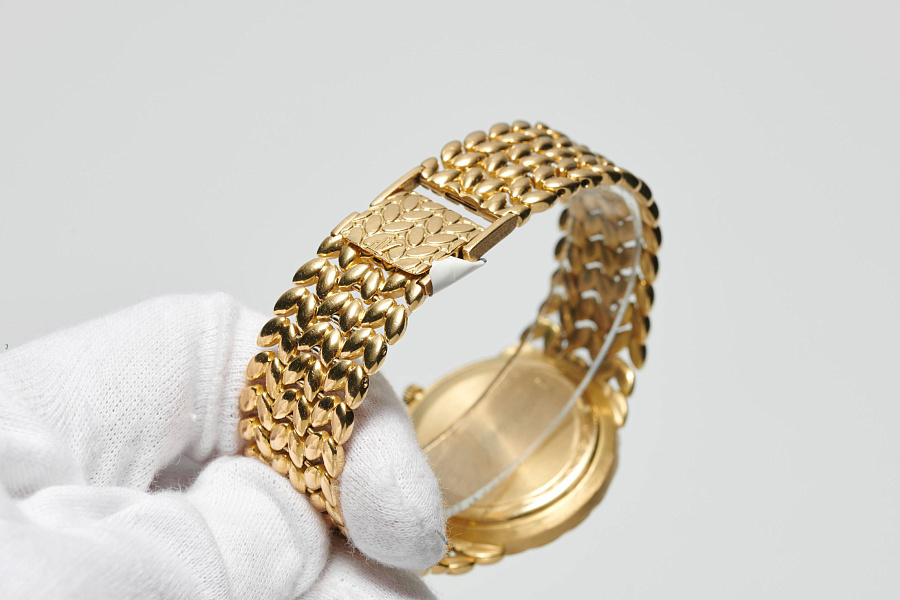 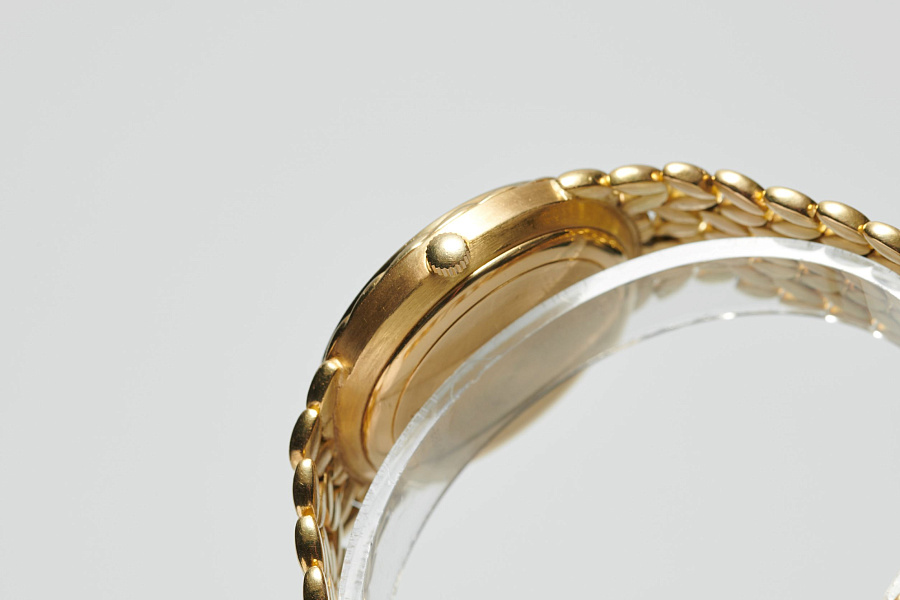 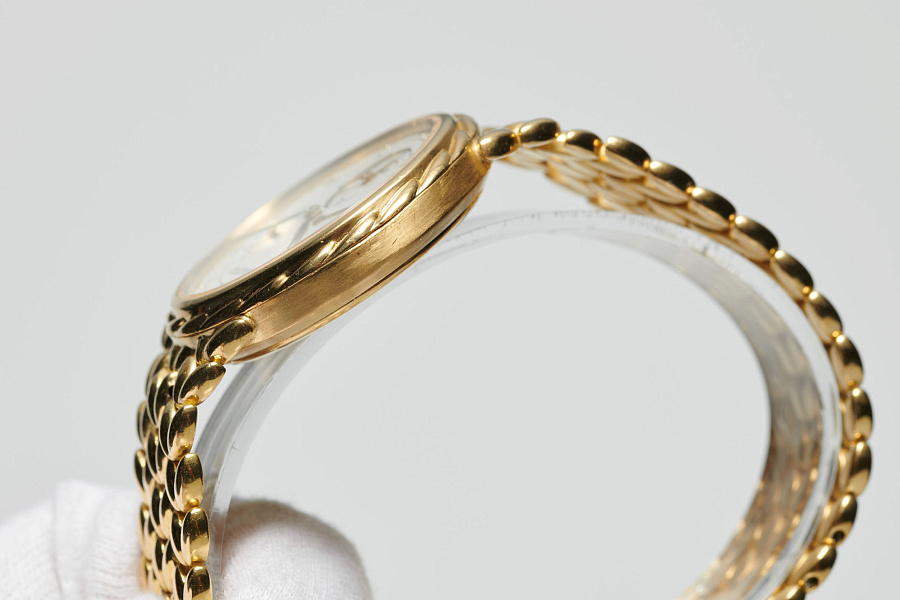 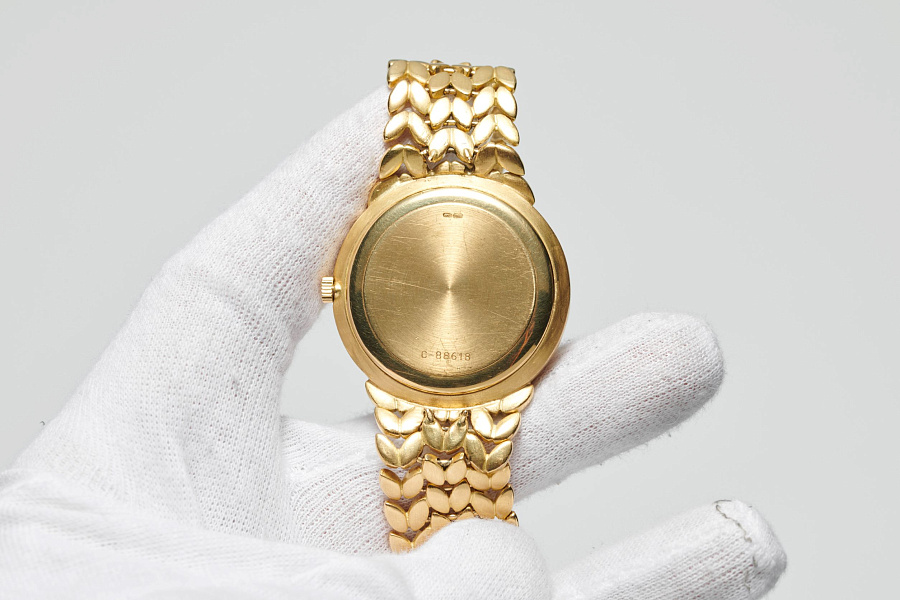 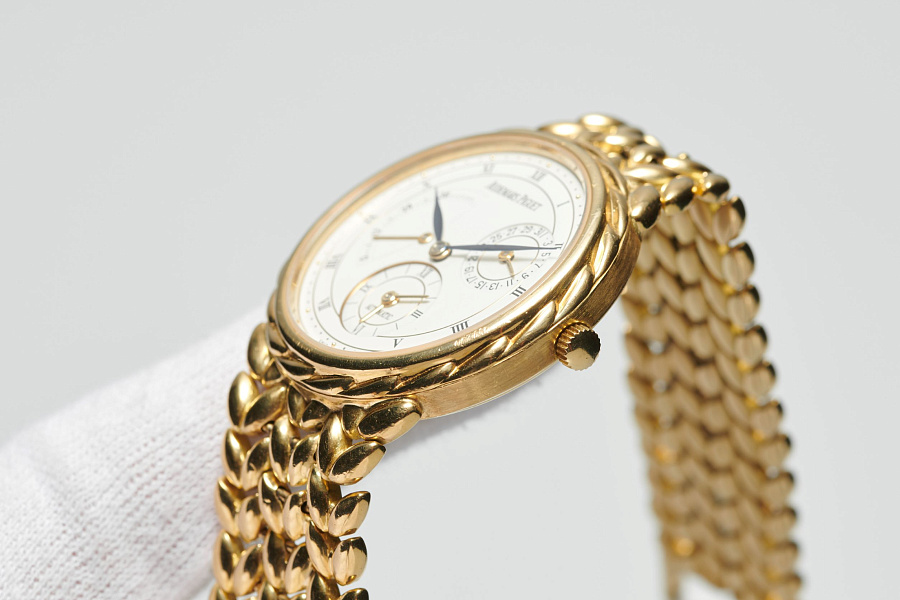 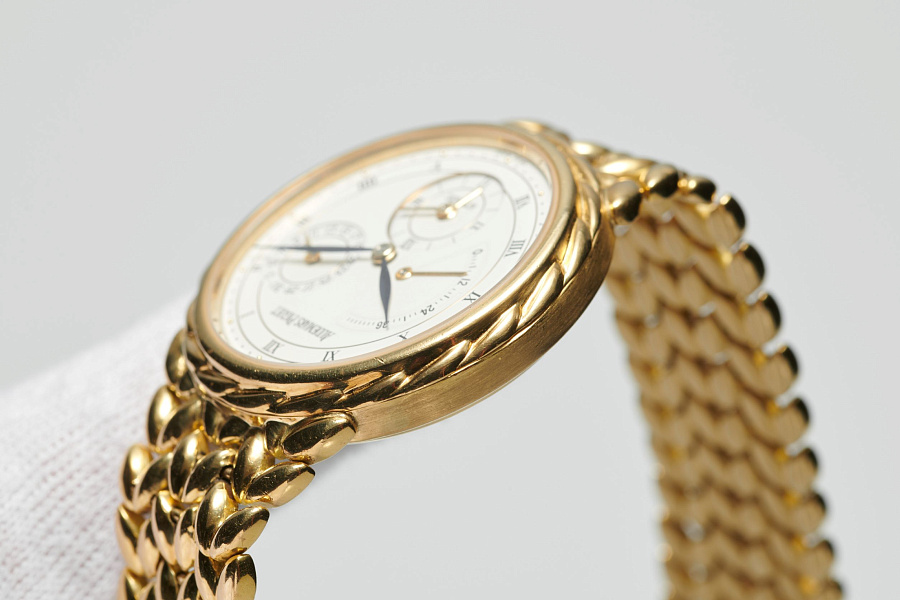 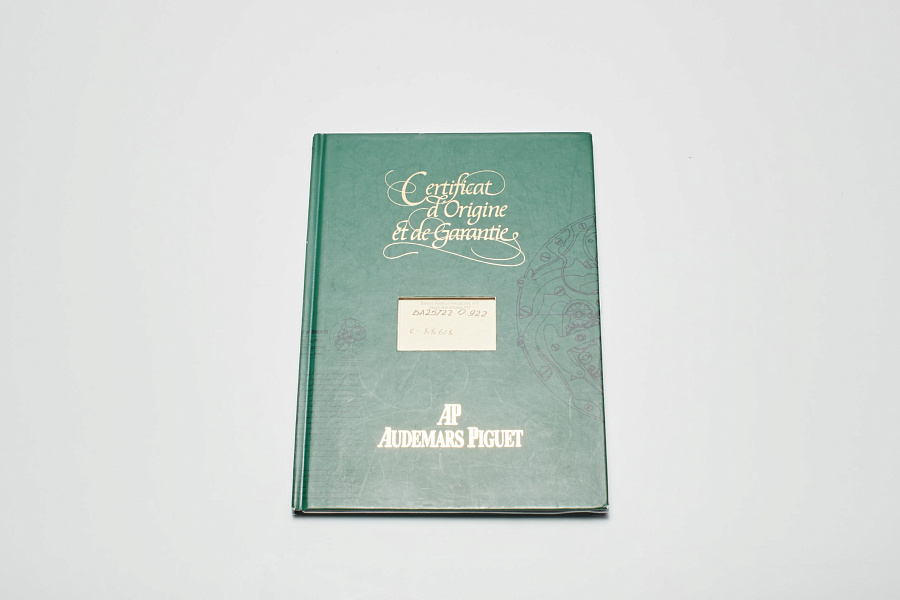 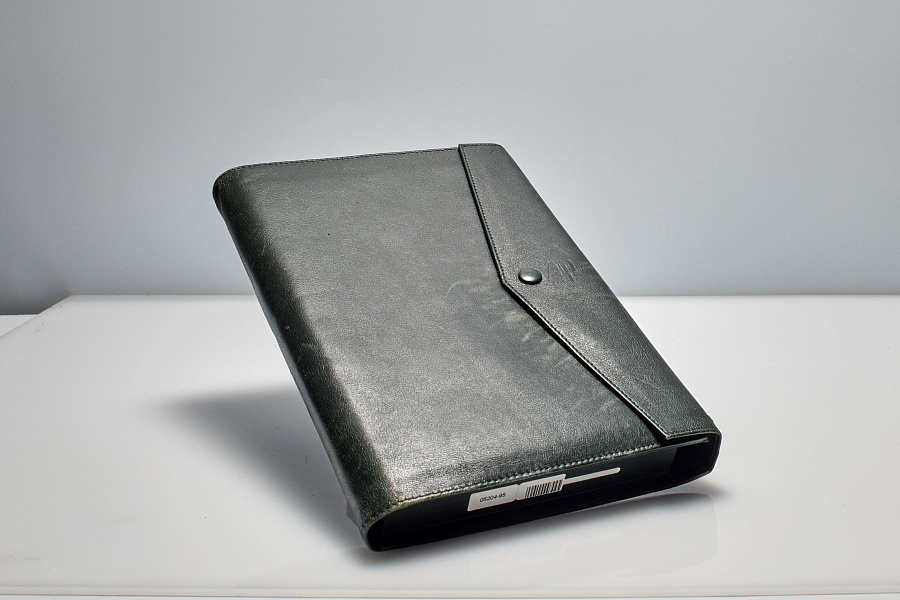 In 1989–1990, Audemars Piguet created its first Dual Time wristwatch – Ref. 25685 – with a classical round design in 18k yellow gold, displaying the time in a second time zone and driven by the self-winding caliber 2129/2845, which had been developed by the brand based on an ebauche caliber 928 supplied by Jaeger-LeCoultre, long-term partner and supplier of Audemars Piguet. The brand later upgraded the caliber, with the newer version designated as 2229/2845.

But even rarer compared to these platinum watches are examples featuring the handmade soldered gold bracelets in the barleycorn style, like the present example.

The vast majority of the production of reference 25685 has a polished round yellow gold case with a characteristic two-step (‘double pomme’) bezel and a matte white silver-plated dial with black Roman numerals. There are also very rare specimens made of platinum also with a matte white silver-plated dial, while even rarer are platinum models with a black dial and brilliant-cut diamond indices, along with a limited edition of 9 pieces in platinum with a purple dial. But even rarer compared to these platinum watches are examples featuring the handmade soldered gold bracelets in the barleycorn style, like the present example. Audemars Piguet gave to such models new references: Phillips sold the watch Ref. 25754BC on a barleycorn bracelet with an onyx dial, diamond-set bezel and dial and hour-markers, and the present example has the designation Ref. 25722BA. Both were very likely produced in just a few copies, quite possibly as unique pieces.

As for the regular model 25685, its release is clearly divided into two periods, featuring two basic types of dials: Mk1 with a small logo, and Mk2 with a new logo. The change in dial style was accompanied by a change in the marking of the power reserve indicator, when in the Mk1’s dial the scale marking continues to the number “48”, and in the latter’s dial the last figure is “36”. We were unable to find transitional examples, and they may not exist. It should also be noted that reference 25685 was originally equipped with the caliber 2129/2845, and towards the end of the production span the watch was equipped with an upgraded 2229/2845 version. However, we were unable to find exactly when this transition took place.

The Dual Time Power Reserve Ref. 25722BA.O.922 is important and remarkable as one of the rarest dual time designs in the Audemars Piguet classical watches collection.

The present example has an interesting feature – its caseback is marked with the serial number C-88xxx, typical of the early period of the basic 25685 execution, while it is equipped with a Mk2 dial. We assume that during the production of this Ref. 25722BA watch the brand used the same blanks as the 25685 model, with a new sculpted bezel and soldered bracelet in a barleycorn style. It should be noted that this is a common practice of Audemars Piguet in the period under review.

We consider the estimated production period to be 1993–1995 for two reasons. Firstly, the gold case does not carry the ‘Head of a St. Bernard dog’ hallmark introduced in 1995 (officially used in Switzerland since August 1, 1995), and secondly, the brand switched to using the new logo and therefore Mk2 dials in 1993.

Considering all of the above, we believe that Dual Time Power Reserve Ref. 25722BA.O.922 is important and remarkable as one of the rarest dual time designs in the Audemars Piguet classical watches collection. Therefore, the present lot appears to be an excellent purchase for the collector who desires a very fine, unusual and sumptuous dual-time wristwatch in an extremely rare bracelet execution from a world-renowned traditional watch brand, one of the undisputed leaders in the haute horlogerie watch market.