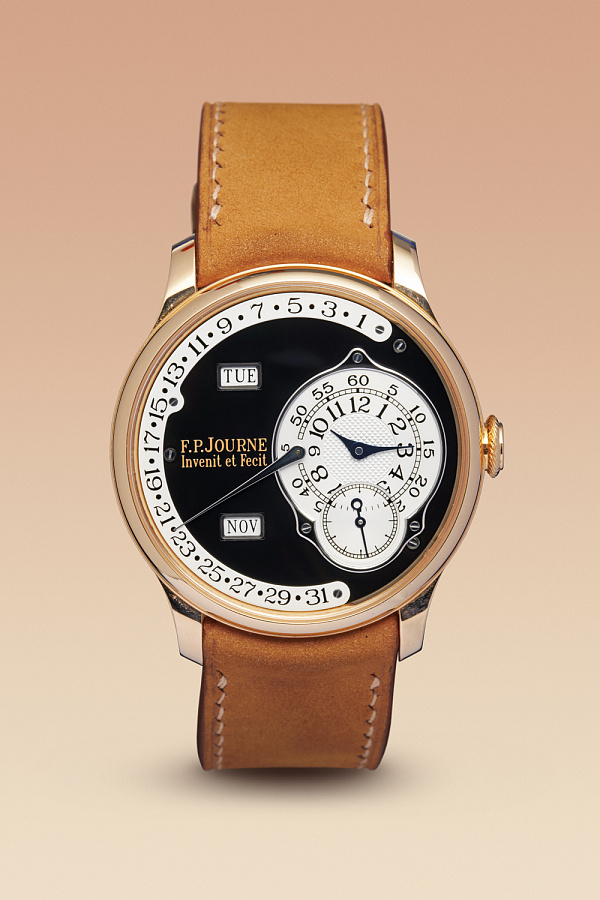 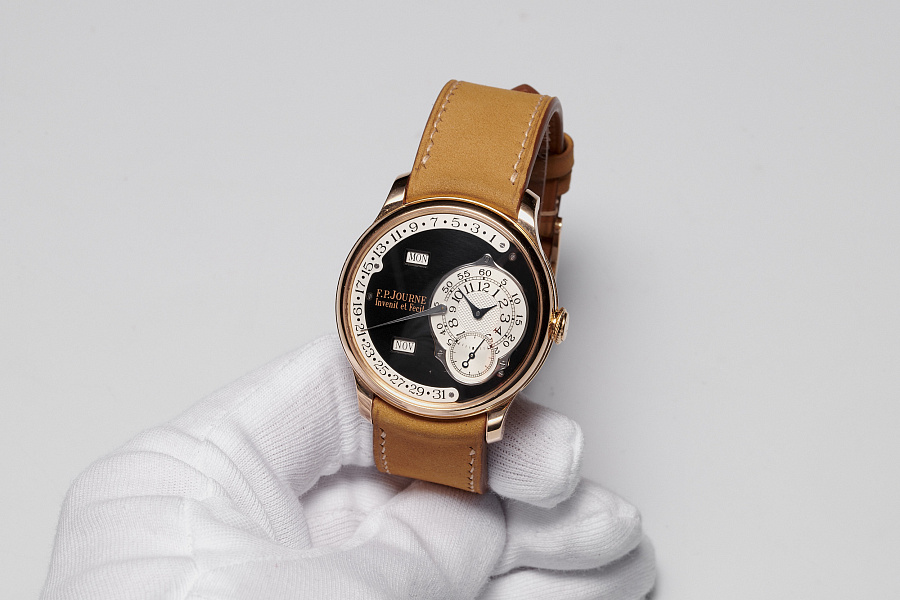 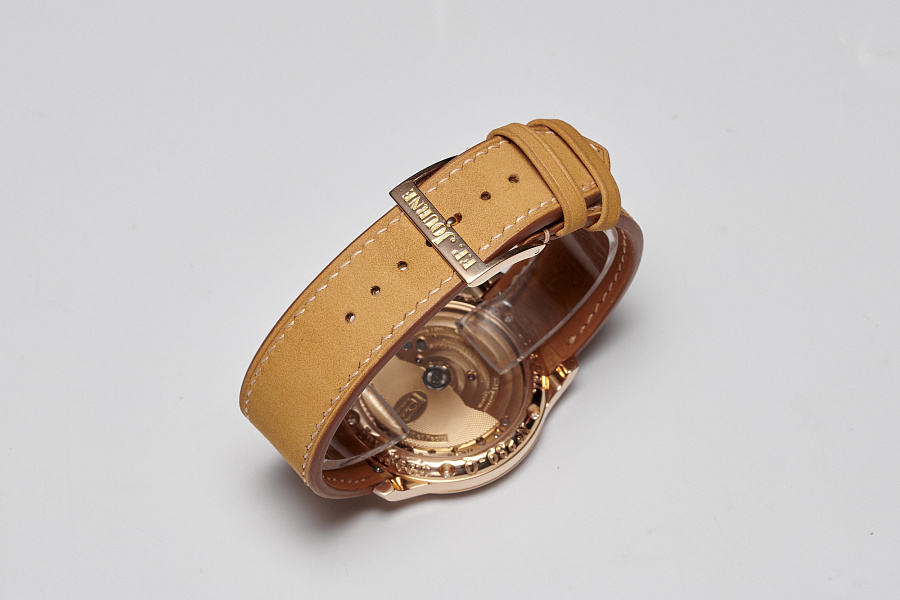 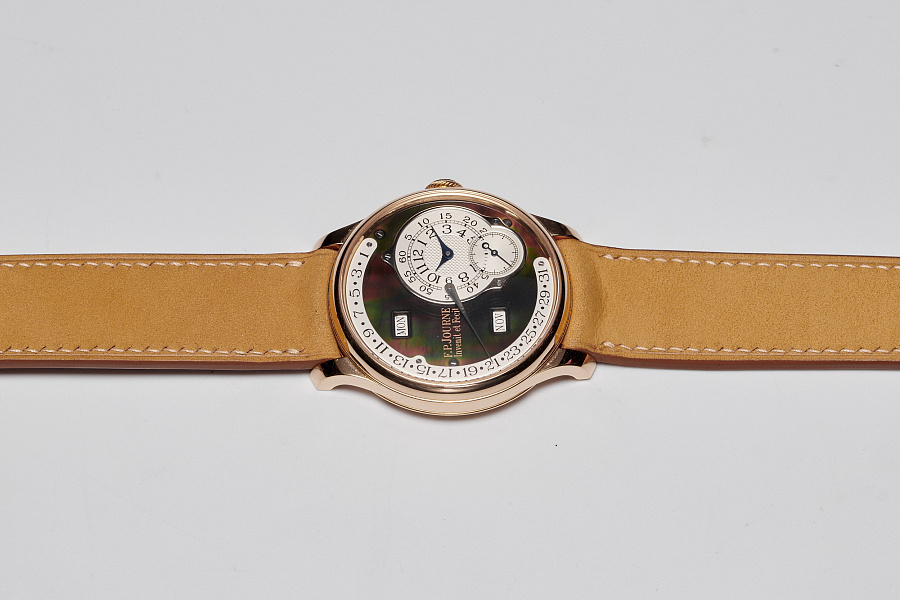 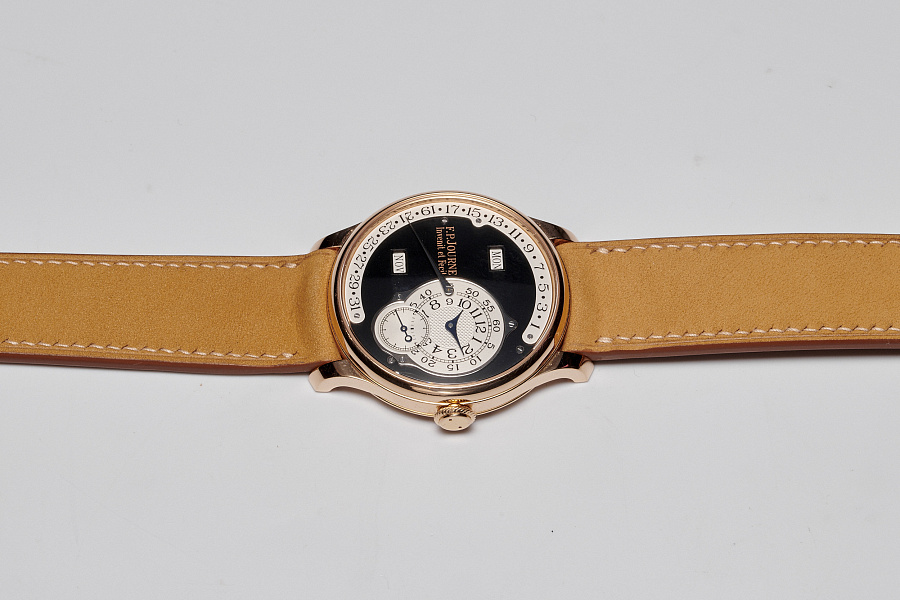 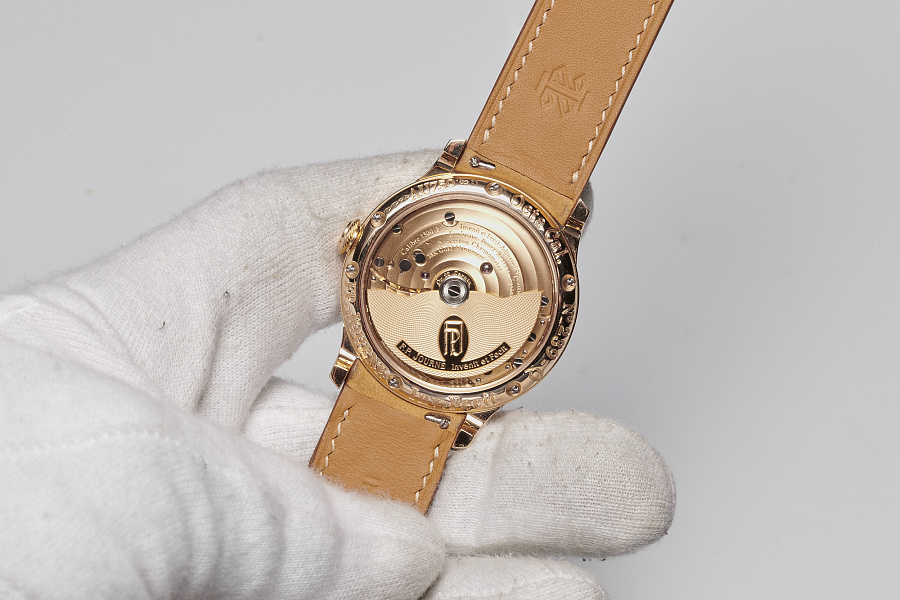 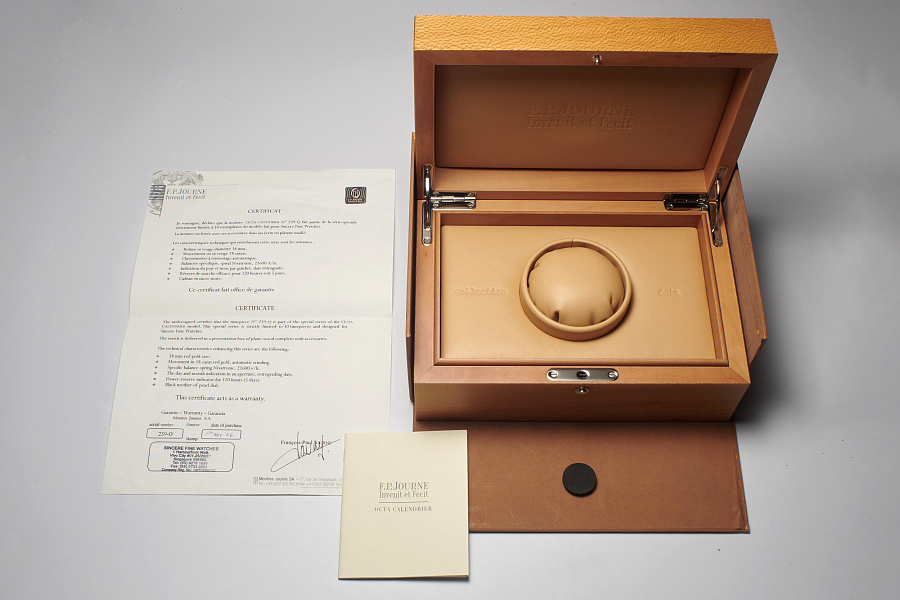 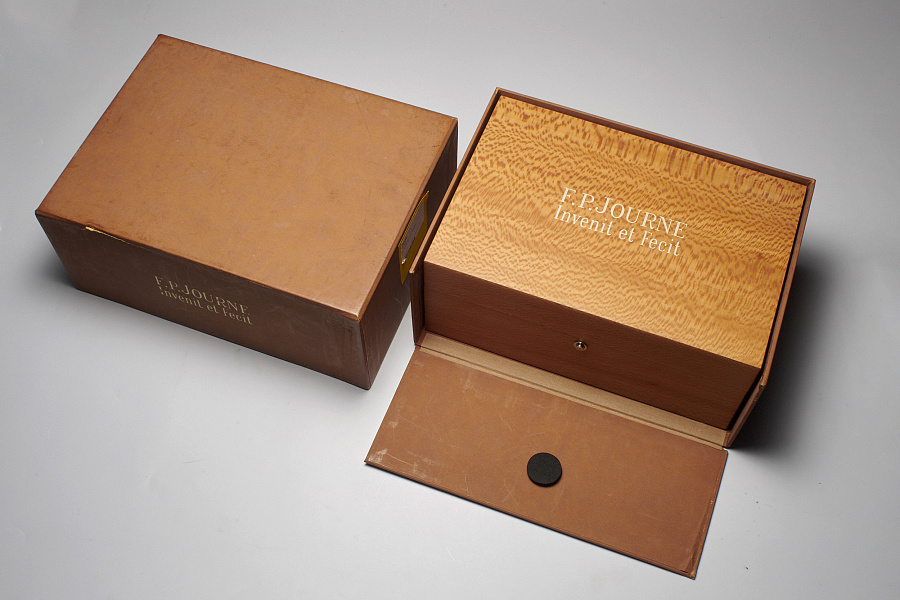 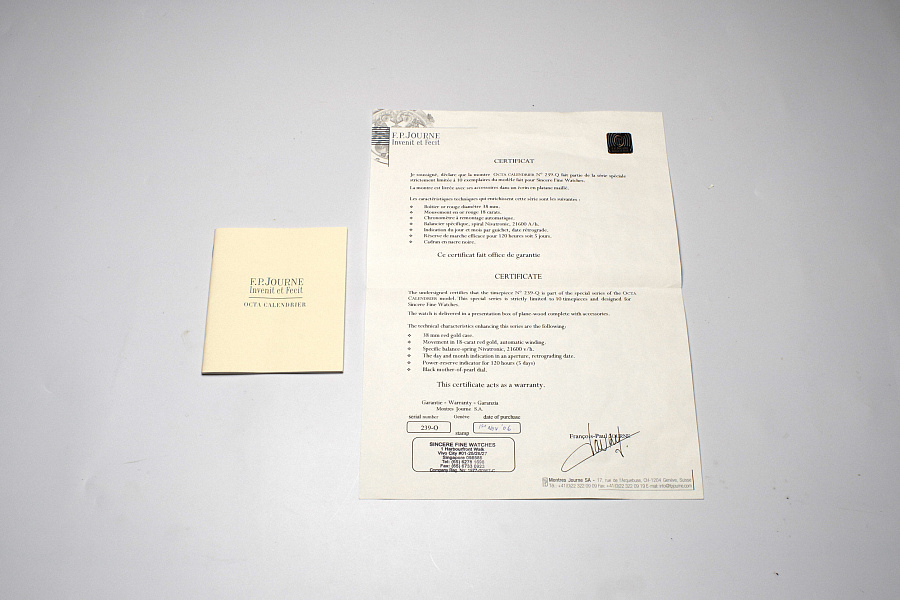 François-Paul Journe is one of the few watchmakers to have developed a wristwatch with an annual calendar complication, automatic winding and long 5-day power reserve. The Octa Calendrier, presented by F. P. Journe in 2002, is the third model of the Octa collection, issued after the Octa Réserve de Marche (2001) and the Octa Chronographe (2002). All Octa timepieces are powered by the same self-winding base caliber 1300 with a notably large (10.1mm) chronometric balance. This caliber was initially developed by François-Paul Journe to meet the requests of his customers preferring a self-winding watch. He conceived a slim caliber, allowing various additional complications to be installed without changing the overall thickness of the movement and ensuring the thickness of the case remained practically the same for all models in the Octa collection. For the caliber, François-Paul Journe developed a large barrel with a 1000mm long and 0.1mm thick winding spring, which provided a power reserve of approximately 160 hours, from which 120 hours were picked, guaranteeing a chronometric rate. The annual calendar function of the Octa Calendrier indicates the date by the large central hand and it advances automatically for the months with 29, 30 and 31 days. In non-leap years (three years out of four) the date should be advanced manually from the 28th to the 29th of February by turning the crown. The date then passes automatically from February 29th to March 1st.

Shortly after its official launch, the Octa Calendrier watch won the Special Jury’s Award at the prestigious Grand Prix d’Horlogerie de Genève in 2002. Early Octa Calendrier watches featured the first-generation caliber 1300 made of rhodium-coated brass. From 2004, the watchmaker began making the Octa movements in 18k rose gold (the second generation), marking the start of caliber 1300.2, as in the present lot. In 2007, the brand introduced the 3rd generation caliber 1300.3, again made of 18k pink gold, but equipped with unidirectional winding. When the Octa was first launched in 2001, its automatic winding mechanism was designed to be bidirectional, which, as it turned out, with an inactive lifestyle of the watch owner, was less effective than unidirectional winding. The production of the Octa Calendrier watch ceased in 2015.

The present lot is an incredibly rare chance to find one of the F. P. Journe Sincere Limited Edition watches at auction.

F. P. Journe has produced numerous Octa Calendrier designs over the years, generally with matte gold dials. For its boutiques the brand produced watches with black dials – icknamed the ‘Black Label Collection’, which are always of high interest. However, the Octa Calendrier Sincere Limited Edition, produced in a very small series of 10 pieces and equipped with black mother-of-pearl dials, is one of the rarest Octa Calendrier models throughout the entire production period of this watch. The present lot is an incredibly rare chance to find one of the F. P. Journe Sincere Limited Edition watches at auction.

The caliber 1300.2 is finished to a high standard with manual decoration of all parts, including chamfering and polishing, Côtes Circulaires decoration of the bridges, Perlage decoration of the mainplate, and a rotor with a Grain d’orge guilloché motif. The peculiarity of the F. P. Journe movements and of the present example is that since 2004 they have been produced from solid 18k pink gold, so that no protective coatings are required to create a flawless and non-patinated finish of the parts.

The Octa Calendrier Sincere Limited Edition No. 239-Q is an extremely rare and attractive purchase for the collector and F. P. Journe watchmaking expertise aficionado, who will receive a beautiful, elegant, and very rare mechanical watch from this famous watch brand, one of the undoubted leaders in the haute horlogerie watch market. The unique, memorable and instantly recognizable style with the warm hues of the rose gold case and black shimmering reflections of the black mother-of-pearl, extremely rarely found in F. P. Journe watches, as well as its characteristic dial layout with F. P. Journe-drawn Arabic numerals and branded blued steel hands, makes the present lot notable and desirable.

The keen collector should note that also offered for purchase in this sale is another F. P. Journe Sincere Limited Edition watch – the Chronomètre à Résonance No. 202-RN in 18k rose gold and with a black mother-of-pearl dial, the perfect companion to the present lot.