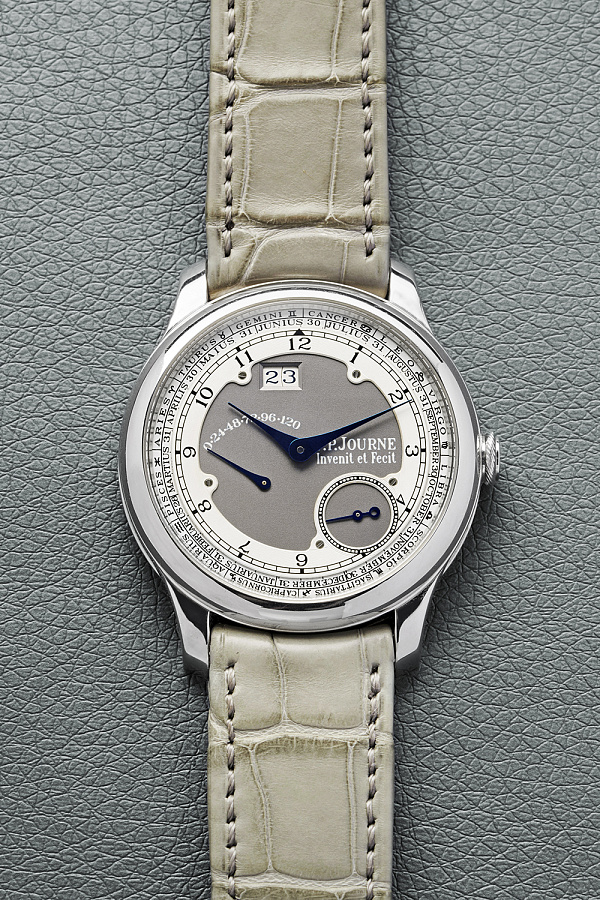 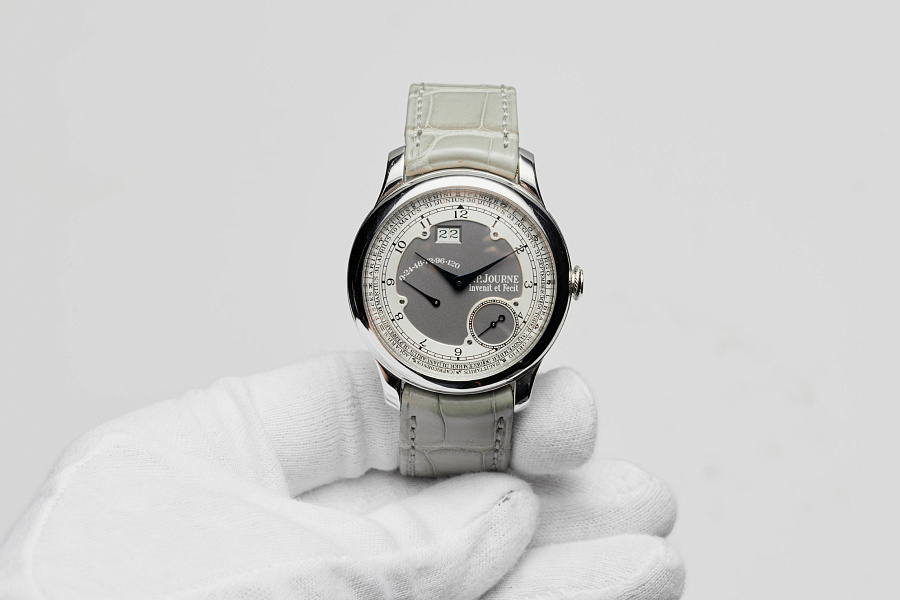 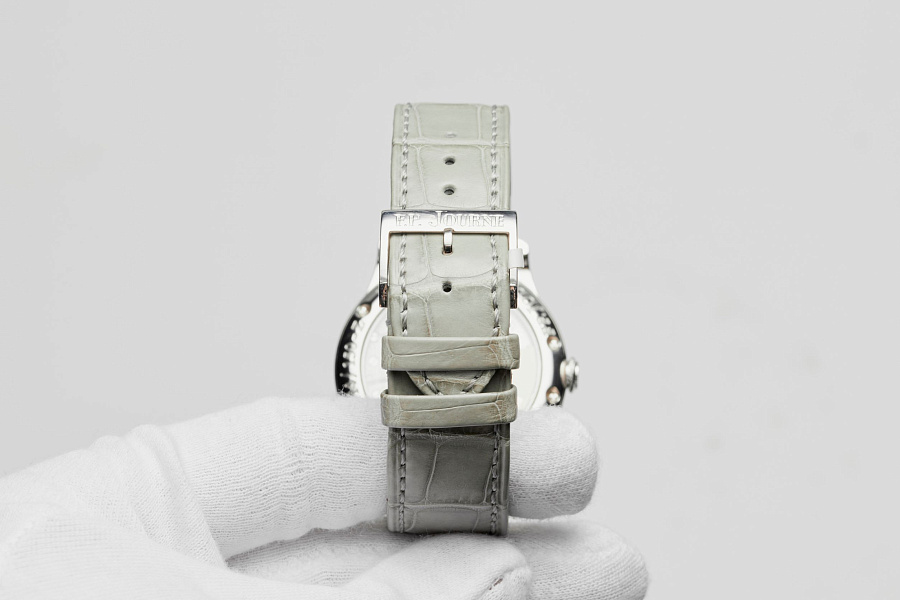 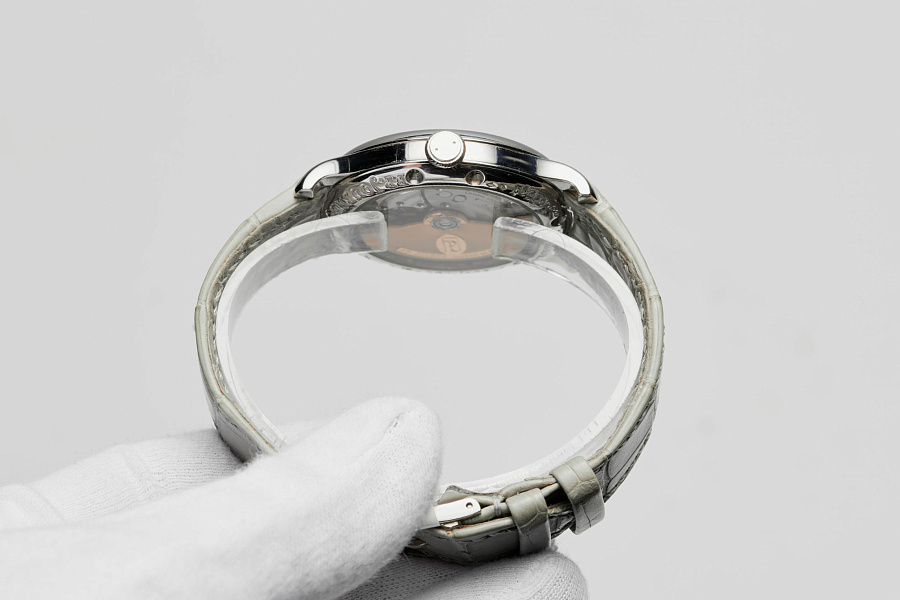 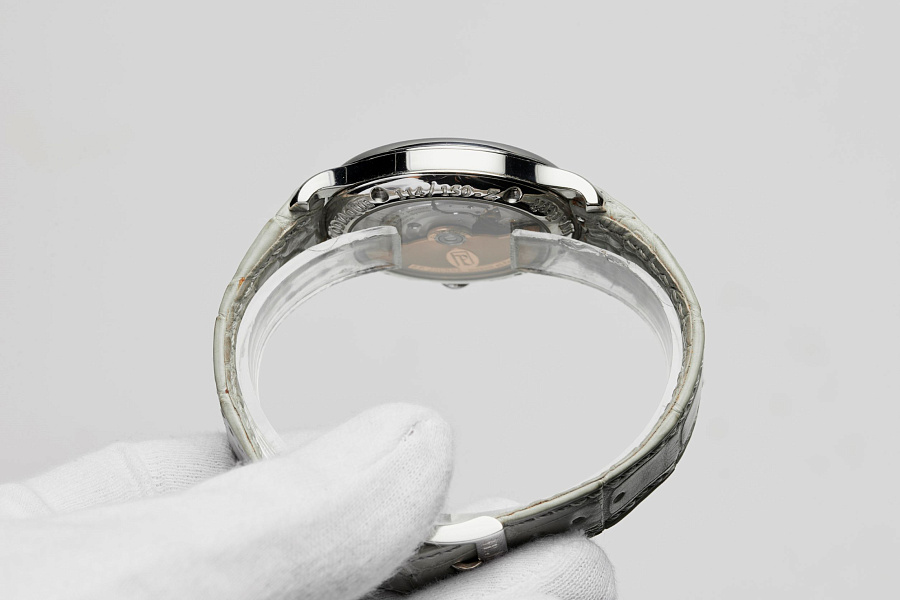 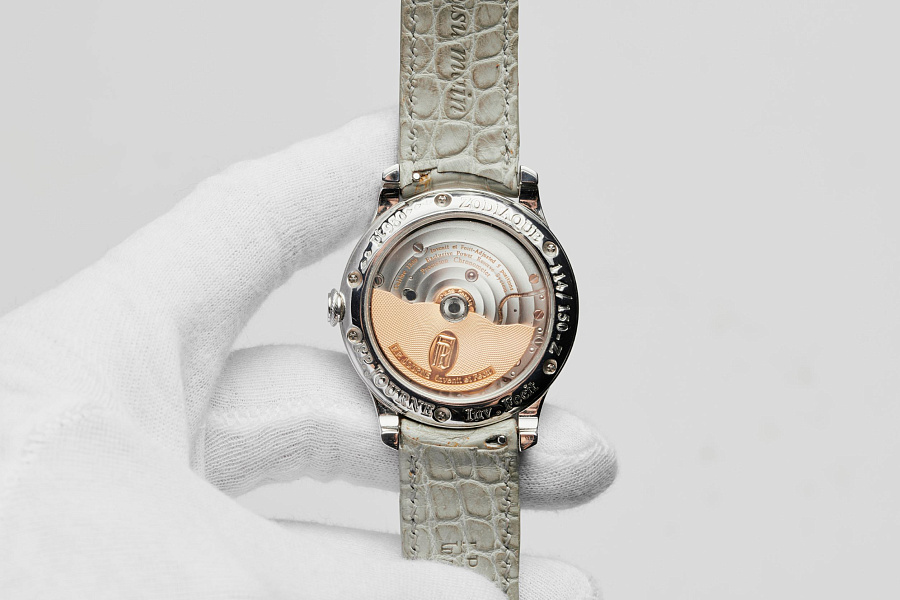 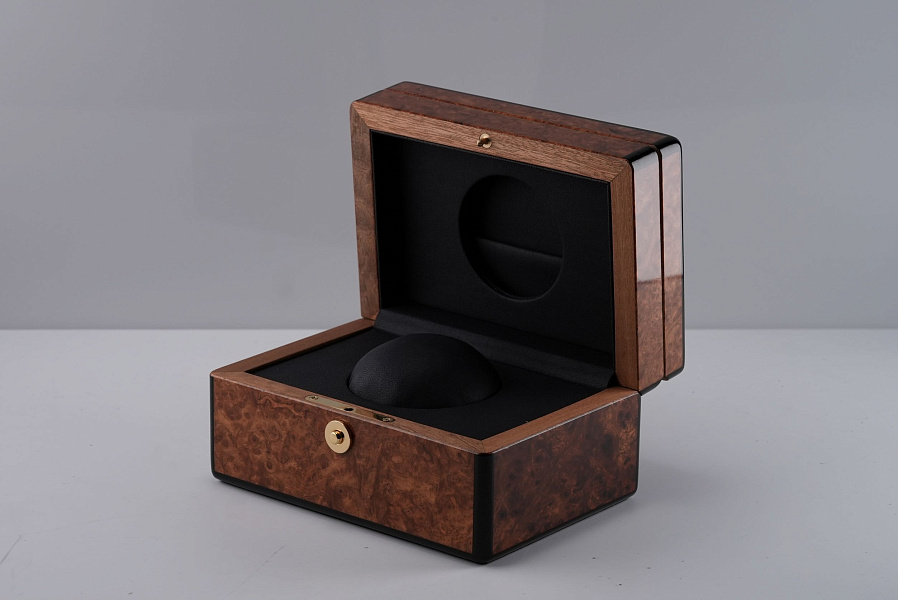 François-Paul Journe is one of the few watchmakers to have developed a wristwatch with a zodiac and annual calendar complication, based on the principle of a rotating ring indicator. The Octa Zodiaque belongs to the Octa collection, powered by the same self-winding base caliber 1300 with a notably large (10.1mm) chronometric balance. This caliber was initially developed by François-Paul Journe to meet the requests of his customers preferring a self-winding watch. He conceived a slim caliber, allowing various additional complications to be installed without changing the overall thickness of the movement and ensuring the thickness of the case remained practically the same for all models in the Octa collection. For the caliber, François-Paul Journe developed a large barrel with a 1000mm long and 0.1mm thick winding spring, which provided a power reserve of approximately 160 hours, of which 120 hours were picked, guaranteeing a chronometric rate.

F. P. Journe has produced numerous Octa designs over the years. The present Octa Zodiaque is incredibly attractive as it is the first ever Octa watch featuring central hour and minute hands in a 40mm watch, and one of a small number of references with a caliber 1300.1 in its original execution, with the mainplate and bridges made of rhodium-plated brass and a solid 22k rose gold rotor – an uncommon combination for F.P. Journe watches. The caliber 1300.1 belongs to the first-generation Octa calibers, with an off-centre 22k gold guilloché rotor and bi-directional self-winding system. Watches from the original limited series have a distinctive marking with the designation “Z” in the serial number, engraved on the rim of the caseback. Such examples have rarely appeared on the market in recent years, and therefore this lot deserves the closest attention.

Firstly, it is the only Octa with a 40mm platinum case, central hour and minute hands, and a first-generation caliber 1300 made of brass. Secondly, the model was released in a limited series of 150 pieces, and was not further produced in series. Thirdly, the watch offers an extremely rare complication for wristwatches with a rotating ring indicator of the zodiac and annual calendar.

The caliber 1300.1 is finished to a high standard with manual decoration of all parts, including chamfering and polishing, Côtes Circulaires decoration of the bridges, perlage decoration of the mainplate, and a rotor in 22k rose gold with a ‘grain d’orge’ guilloché motif. The peculiarity of F. P. Journe movements, and of the present example, is that before 2004 they were produced from rhodium-coated brass, but in solid 18k pink gold since 2004. Nevertheless, collectors and connoisseurs of F. P. Journe’s watchmaking artistry are showing an increasing interest in watches with brass movements, which represent the early period of the brand. The total number of F. P. Journe watches with brass movements is estimated at about 2,000 pieces, and therefore such examples have recently attracted more and more interest among collectors.

The Octa Zodiaque is one of the rarest and most unusual of Francois-Paul Journe’s creations. It has a matte textured slate grey solid white gold dial, easy-to-read Francois-Paul Journe-designed central hour and minute hands, and the rare feature of a zodiac and annual calendar complication, based on the principle of a rotating ring indicator. The Octa Zodiaque was produced in a limited series of 150 pieces between 2004 and 2006, with reportedly no more than 62 pieces made in a year. The outer ring with the months and zodiac signs makes a one-day counter clockwise increment every day, with the month and corresponding zodiac sign indicated by the triangular marker at 12 o’clock.

The F. P. Journe Octa Zodiaque Platinum Limited Edition No. 114/150-Z would be an extremely rare and attractive purchase for the collector and F. P. Journe watchmaking expertise aficionado, who will receive a very rare, unusual and collectible astronomic limited-edition platinum wristwatch from this famous watch brand, one of the undoubted leaders in the haute horlogerie watch market. This model is unique in many aspects, and therefore deserves extremely close attention. Firstly, it is the only Octa with a 40mm platinum case, central hour and minute hands, and a first-generation caliber 1300 made of brass. Secondly, the model was released in a limited series of 150 pieces, and was not further produced in series. Thirdly, the watch offers an extremely rare complication for wristwatches with a rotating ring indicator of the zodiac and annual calendar. Fourthly, it very rarely pops up at auctions. Therefore, the present lot is an incredibly rare chance to meet one of the most original F. P. Journe Octa watches at auction.