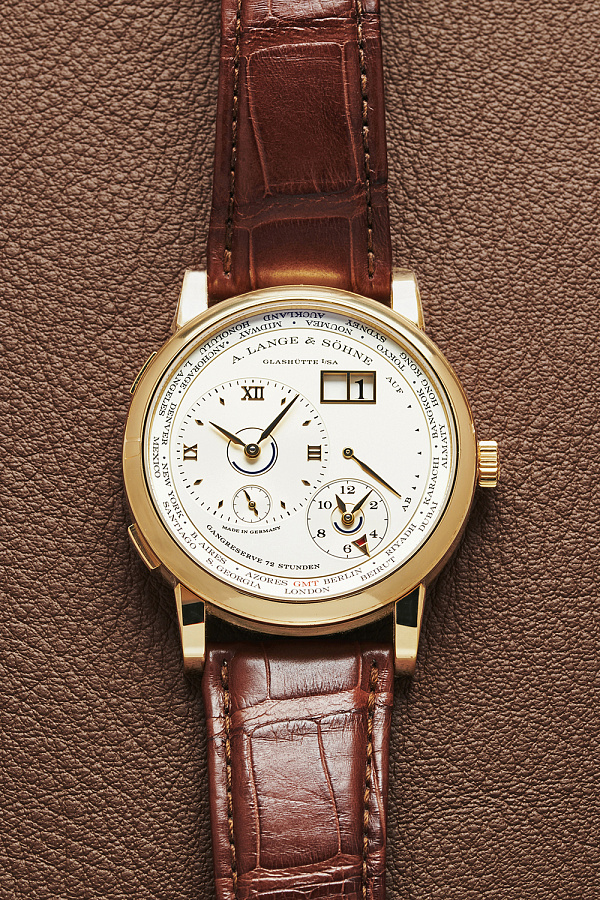 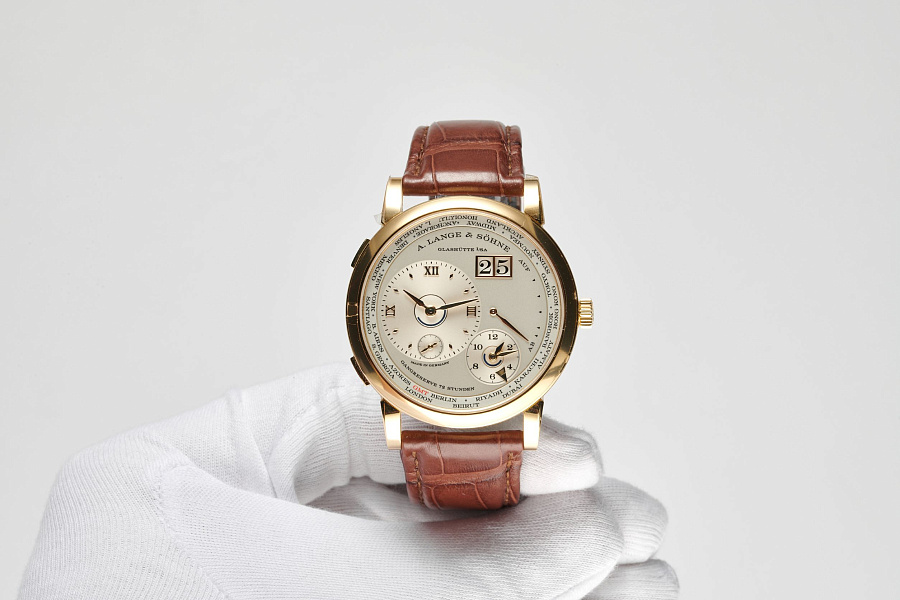 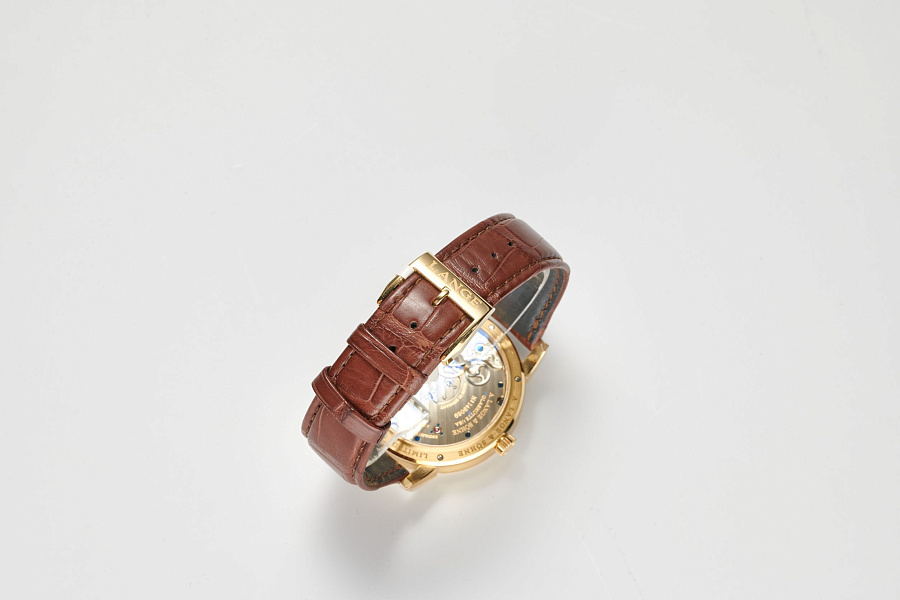 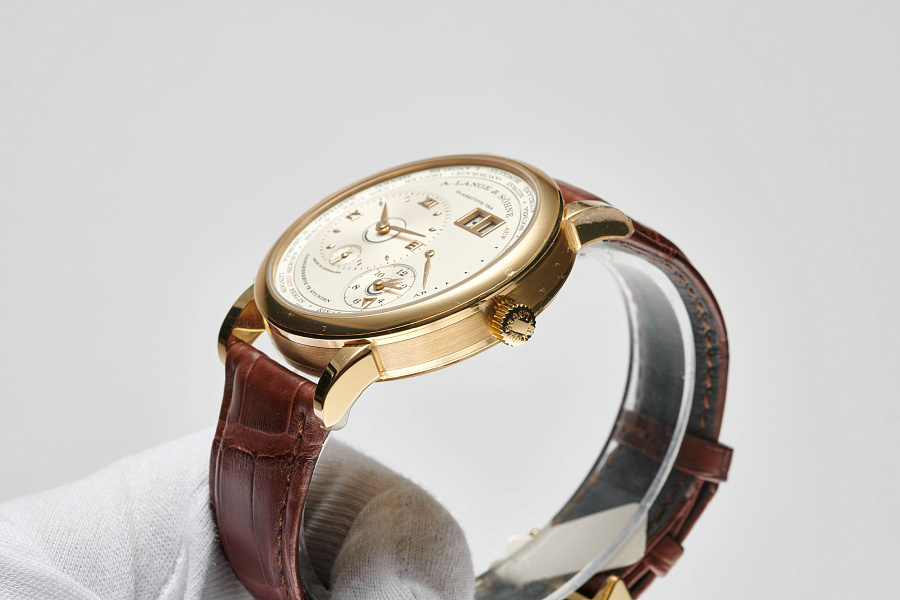 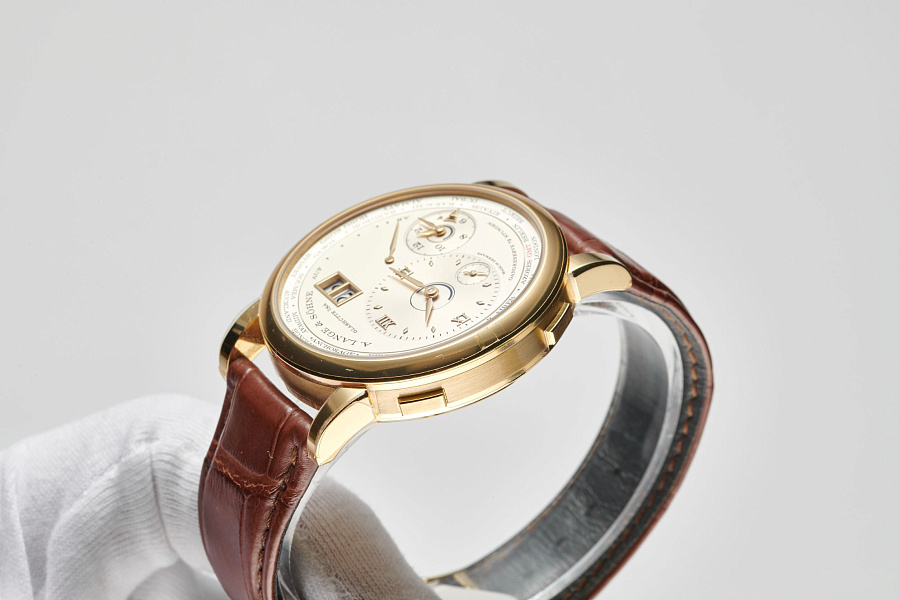 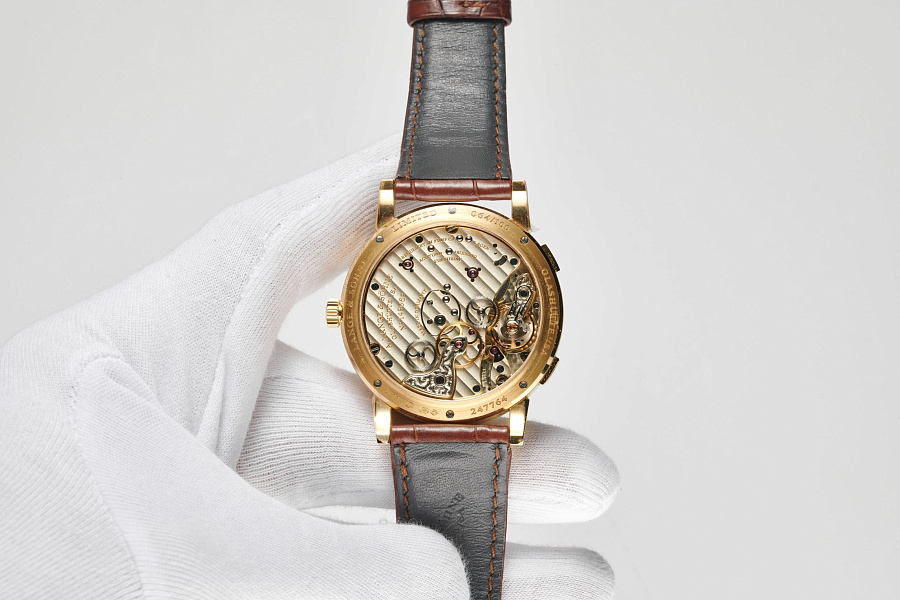 The famous signature asymmetric arrangement of the dial is a unique feature of the Lange 1 collection, which has been perceived as one of the most valuable assets of the brand since its reincarnation in 1990–1994. Since the launch of the Lange 1 collection in 1994, it has been offered in many versions, including in Lange 1 Time Zone watches. Introduced onto the market in 2005, the Lange 1 Time Zone was a sophisticated version of the legendary Lange 1, gaining one more useful function – a time zone indication. Initially the watch was produced in three versions – Ref. 116.021 in 18k yellow gold with a champagne-toned dial, Ref. 116.032 in 18k rose gold with a silver-plated dial, and Ref. 116.025 in platinum with a rhodium-plated dial. Up to the collection update in 2020, more than 20 variations had been offered, with different case, dial, city ring and strap or bracelet executions. In 2020, the Lange 1 Time Zone collection got a new reference – 136.XXX – with a modernized caliber L141.1 and different dial design.

The classical lateral day/night indicators of the local and zonal time sub-dials were replaced by indicators of the central location on each of the two sub-dials in the new reference. Moreover, these indicators are of a differential type, used extremely rarely in modern wristwatches, when both the pointer hand (here it is the hour hand) and the indicator scale rotate. Of course, the rotation speeds of both are different. In addition, the new reference received a DST (daylight saving time) indicator built into the small aperture of the triangular city pointer at 5 o’clock – there was no such indicator in previous references. When this aperture is red, it means the selected city observes daylight savings time and one hour needs to be added to the second time zone.

Introduced onto the market in 2005, the Lange 1 Time Zone was a sophisticated version of the legendary Lange 1, gaining one more useful function – a time zone indication.

In 2005, when the Lange 1 Time Zone collection was launched, a situation developed on the market when rose gold dominated among all types of precious metals, surpassing in popularity the yellow gold which had prevailed until the mid-1990s. Indeed, yellow gold had almost disappeared from the collections of leading brands by the early 2000s, while white gold, incredibly popular in the second half of the 1990s and early 2000s, had lost its dominant position by the early 2000s.

Yellow gold remains the third most popular among the classic gold alloys to this day. A. Lange & Söhne sees it as a reference to the brand’s revival, when the Lange 1 in yellow gold was in the inaugural collection, completed with a champagne-coloured dial. It is this version that is considered as particularly memorable, referring to the history of the brand. In addition, the release of the present reference in yellow gold at the relaunch of the Lange 1 Time Zone line in 2020 is exclusive, as this model is produced in a limited edition of 100 pieces to be sold only in Lange boutiques.

In this sense, the yellow-gold limited-edition Lange 1 Time Zone Ref. 136.021 with a champagne-coloured dial should be regarded as the most sought-after reference in the current collection. In fact, it is the archetype of this design created by A. Lange & Söhne, which certainly attracts connoisseurs and collectors, as well as buyers who would like to purchase a respectable timepiece with a second time zone function of the prominent German watch manufacture.

The release of the present reference in yellow gold at the relaunch of the Lange 1 Time Zone line in 2020 is exclusive, as this model is produced in a limited edition of 100 pieces to be sold only in Lange boutiques.

In addition to the historical aspect, one should also note the undoubted attractiveness of the design, built on the historical combination of the warm tones of the yellow gold of the case and the yellowy silver-plated, so-called champagne-coloured dial.

The craftsmanship of the dial is admirable, particularly the yellow-gold alpha hands, applied indexes and double window of the branded big date indicator, and the lucid dial with slightly recessed sub-dials for the indication of the hours/minutes, day/night and small seconds, the backgrounds of which are decorated with fine circular grooves. These sub-dials feature the same tone as the rest of the dial, but the embossed finish provides a fine contrast with its flat satin-brushed finishing, adding to the appeal of the dial.

Reference 136.021 is powered by the hand-wound 72-hour power reserve single-barrel caliber L141.1, which was developed based on the Grand Lange 1’s second-generation single-barrel caliber L095.1, introduced in 2012. Among the advantages of caliber L141.1 are its high-end finish, typical for Lange, and unique design – which is unique even for the A. Lange & Söhne collection. The signature three-quarter plate construction, with the mainplate and bridges made from nickel silver (German silver) without plating, and three screwed gold chatons, considered one of the most visible and valued hallmarks of Lange’s watchmaking artistry, is complemented by the top-mounted gear train of the second time zone indicator, with three wheels and an intermediate wheel cock. This, like the balance cock, is hand-engraved in the typical Lange manner.

These functional details make the Lange 1 Time Zone distinctive by adding dynamics to the signature design, seen through the transparent caseback. The meticulous finishing with Glashütte stripes, blued screws, polished bevels, a swan neck micrometer regulator, and engraved and gilded inscriptions, makes the movement incredibly eye-catching, while the traditionally hand-engraved cocks make each example feel like one of a kind.

The Lange 1 Time Zone Limited Edition Ref. 136.021 would be a fine purchase for the collector and connoisseur of A. Lange & Söhne watchmaking artistry who desires an attractive complicated mechanical wristwatch with useful second time zone functions from a world-famous traditional watch brand, the undisputed market leader in German high watchmaking. The combination of typical Lange design features, including the spectacular asymmetric arrangement of the Lange 1 dial, with a Time Zone sophisticated arrangement, along with the big date indicator, typical for Lange watches of the modern era, make the present lot highly desirable. The exquisite finishing of the movement’s parts and its typical Lange appearance will impress the heart of any connoisseur, and A. Lange & Söhne’s reputation in these aspects should be recognised as impeccable.