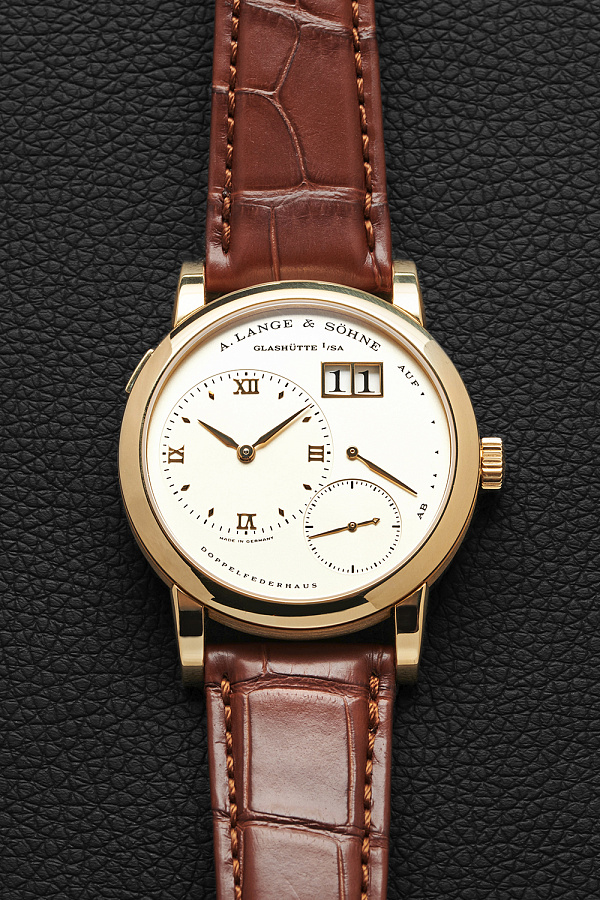 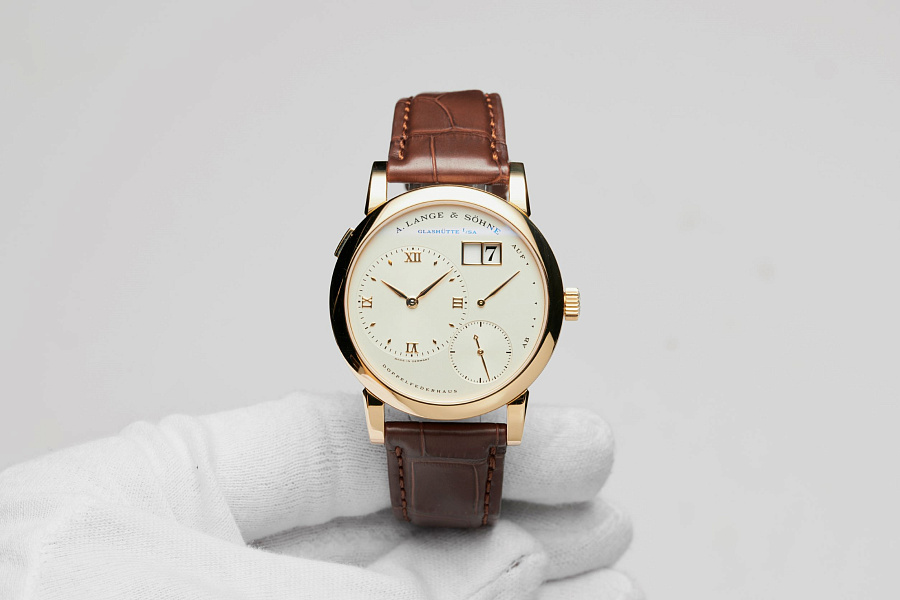 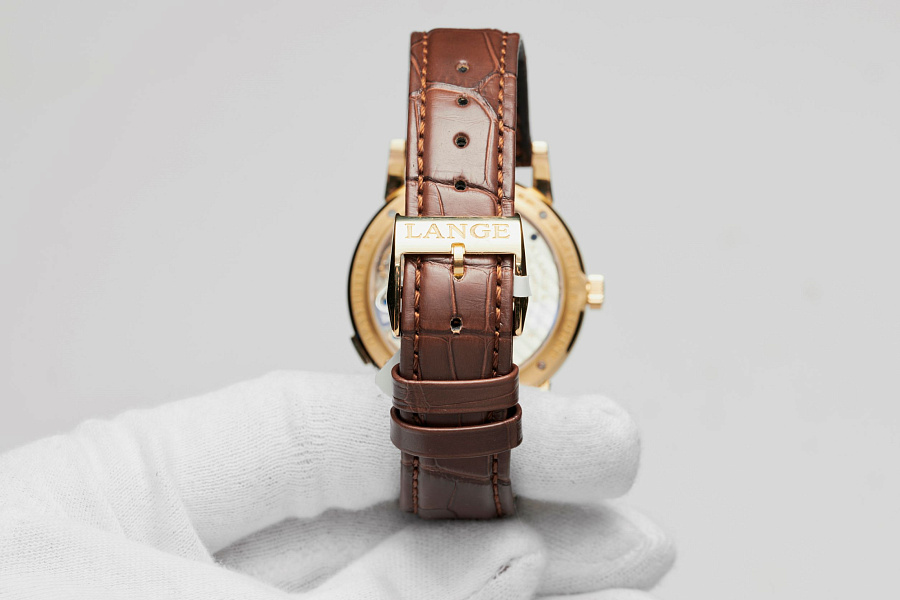 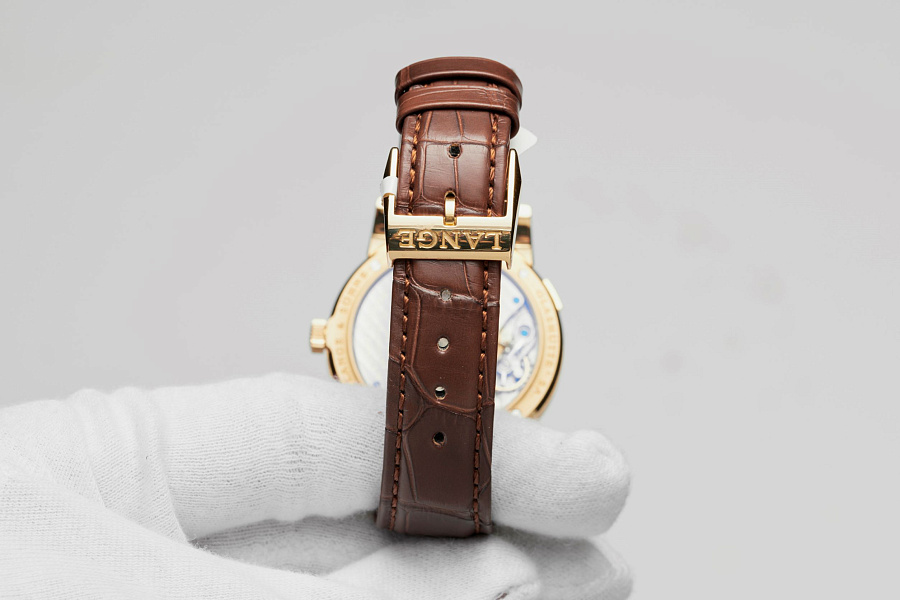 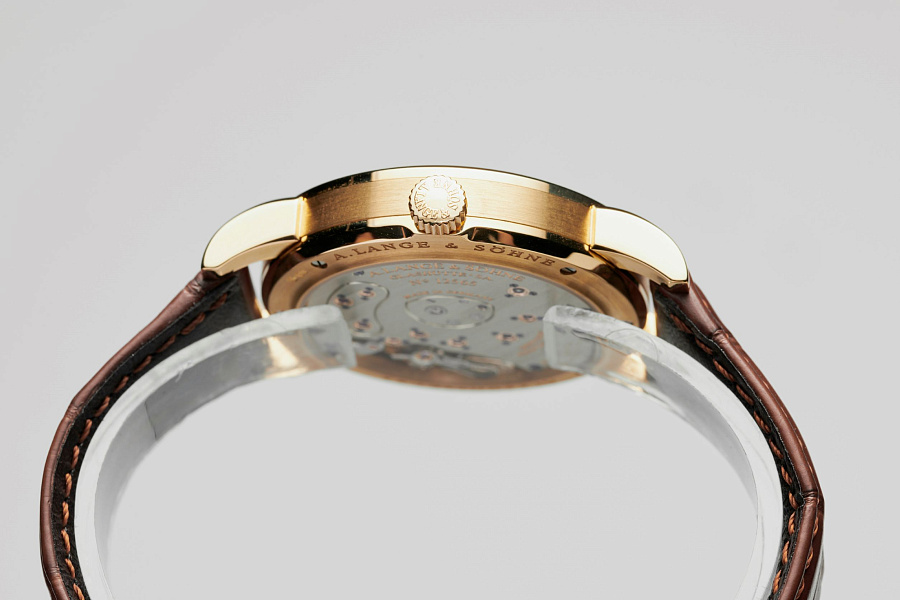 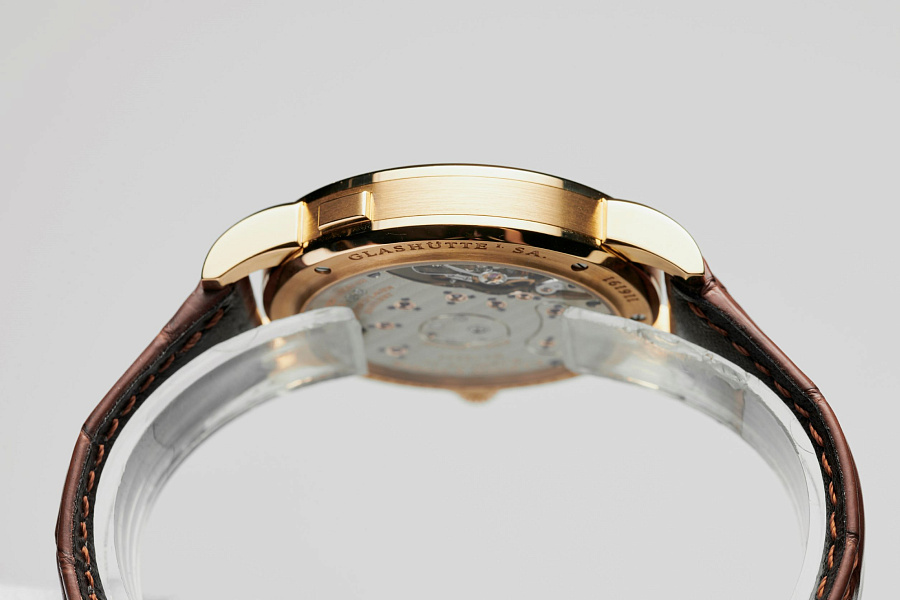 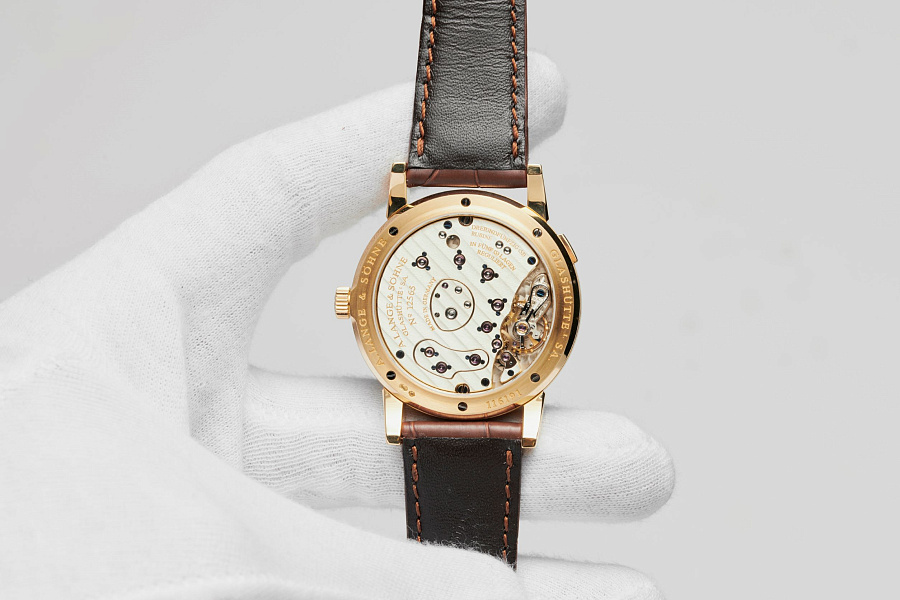 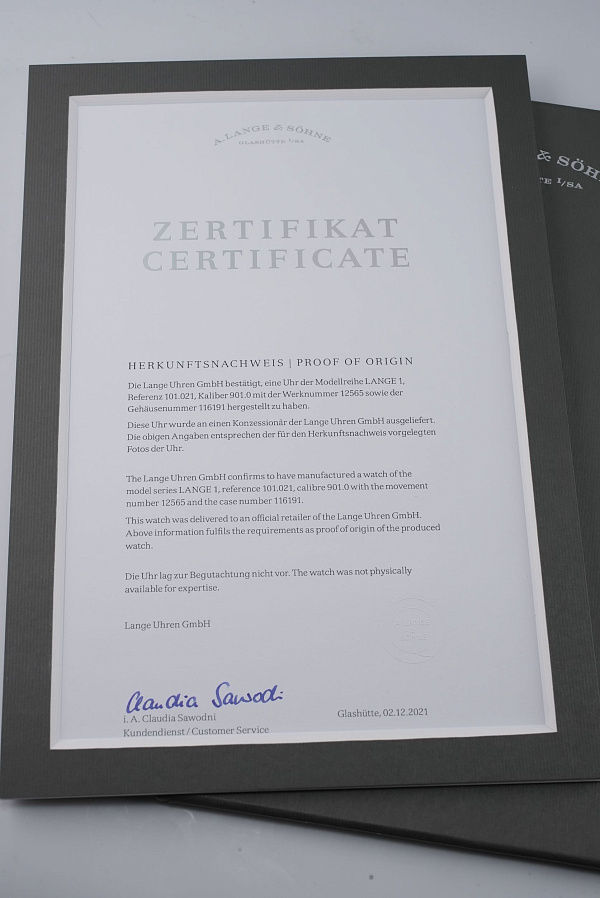 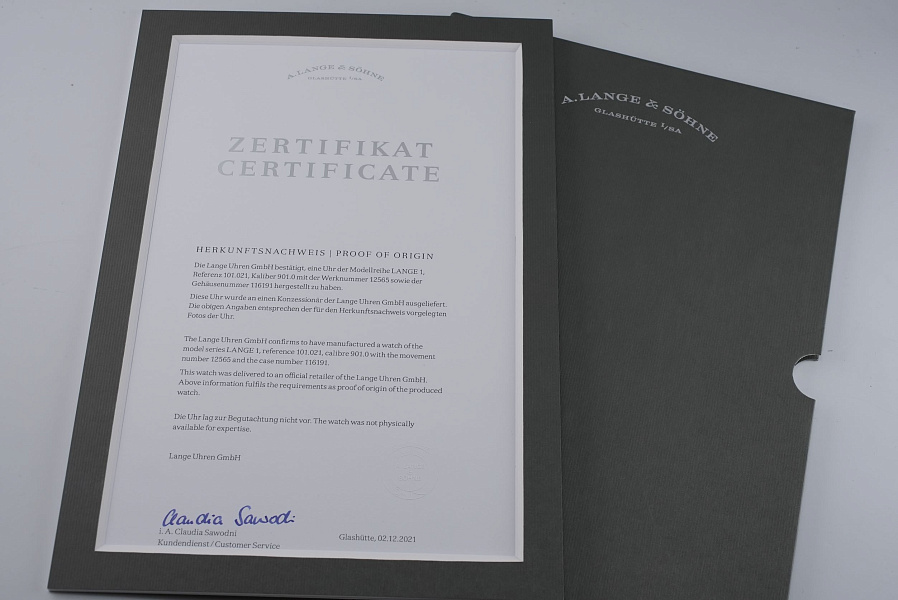 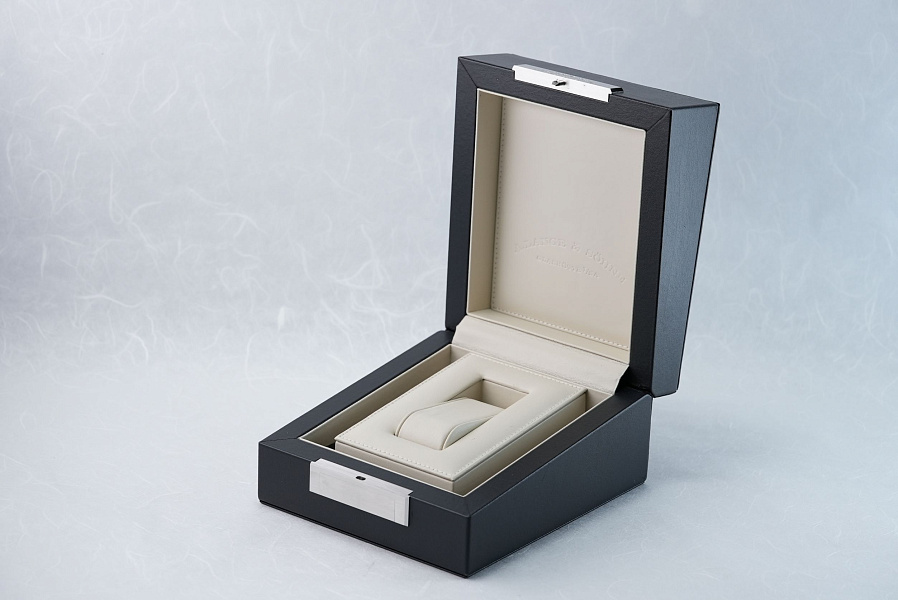 The present reference 101.021 has an especial historical status, since this was one of the first references of the flagship Lange 1 collection. Its historic predecessor, reference 101.001 with closed solid-gold caseback, was presented by the brand along with three other inaugural models at the historical press conference on October 24, 1994 in Dresden, Germany. 101.021, launched in 1995, features the same case and dial design as 101.001, with the exception of sapphire caseback, made to admire a gorgeous Lange caliber. Ref. 101.001 soon was discontinued, and now is almost impossible to find, but 101.021 was one of the most long-lived references in the modern A. Lange & Söhne collection. What is important, in the design of the 101.021 reference we find the same face as the model 101.001, one of the first four.

The combination of rare design features, including the spectacular asymmetric arrangement of the Lange 1 dial, the juxtaposition of the yellow gold case and subtle ‘champagne’ colour and finishing of the dial, along with the big date indicator, typical for Lange watches of the modern era, make the present lot highly desirable.

In addition to the emotional and collectible aspects, we should also note the undoubted attractiveness of the design, built on the combination of the warm tones of the yellow gold of the case and the decorative elements of the dial – the hands, the hour markers and the branded double window of the big date indicator, and the cream-colored dial background, the color described by Lange as ‘champagne’. The dial features fine finishing, with slightly recessed sub-dials for the indication of the hours, minutes and seconds, the backgrounds of which are decorated with fine circular grooves. These sub-dials feature the same tone as the rest of the dial, but the embossed finish provides a fine contrast with its flat satin-brushed finishing, adding to the appeal of the dial.

Reference 101.021 is powered by the hand-wound 72-hour power reserve double-barrel caliber L901.0, which was developed during the revival of the manufactory in the early 1990s and was used as a base caliber in the Lange 1 collection until the 2010s. One of the advantages of this caliber is its unique design and finish, which make it easy to distinguish A. Lange & Söhne watches from high-end Swiss-made watches. This is the signature three-quarter plate construction, with the mainplate and bridges made from nickel silver without plating, and nine screwed gold chatons, considered one of the most visible and valued hallmarks of Lange’s watchmaking artistry. The meticulous finishing with Glashütte stripes, blued screws, polished bevels, a swan neck micrometric regulator, and engraved and gilded inscriptions, makes the movement very eye-catching, while the traditional hand-engraved balance cock makes each Lange 1 feel like one of a kind.

The A. Lange & Söhne Lange 1 Ref. 101.021 would be regarded as an excellent purchase for the collector who desires a rare, important and charismatic complicated mechanical wristwatch from a world-famous traditional watch brand, the undisputed market leader in German high watchmaking. The combination of rare design features, including the spectacular asymmetric arrangement of the Lange 1 dial, the juxtaposition of the yellow gold case and subtle ‘champagne’ colour and finishing of the dial, along with the big date indicator, typical for Lange watches of the modern era, make the present lot highly desirable. The exquisite finishing of the movement’s parts and its typical Lange appearance will impress the heart of any connoisseur, and A. Lange & Söhne’s reputation in these aspects should be recognized as impeccable.