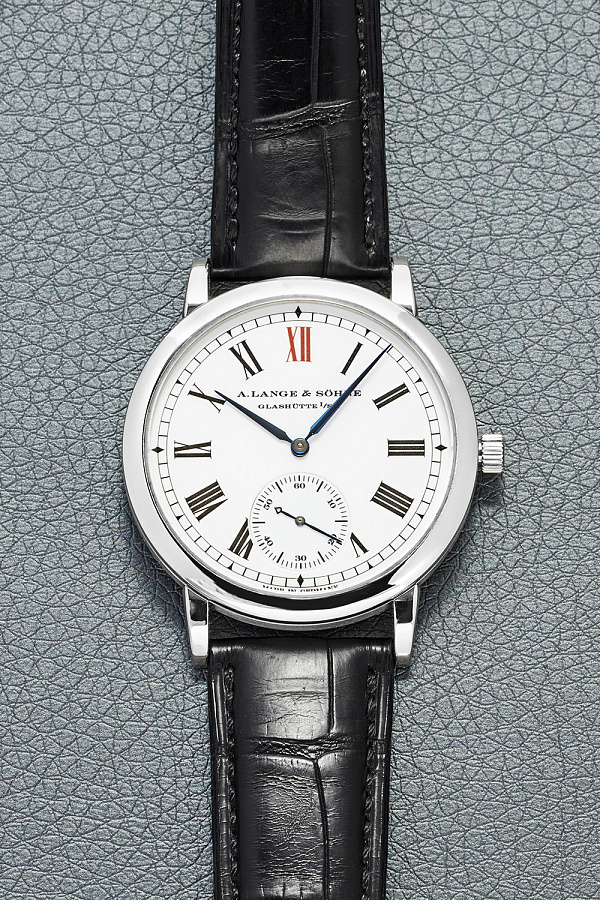 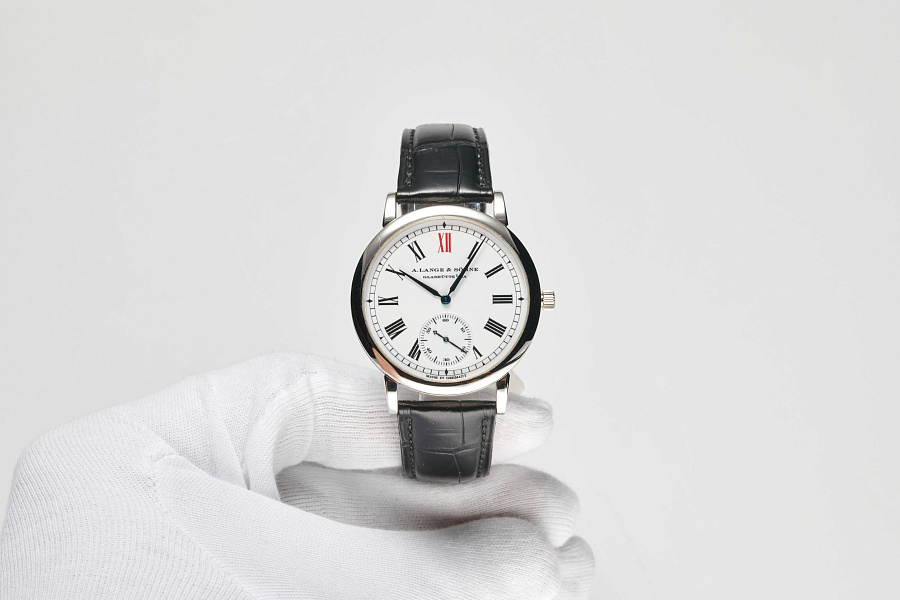 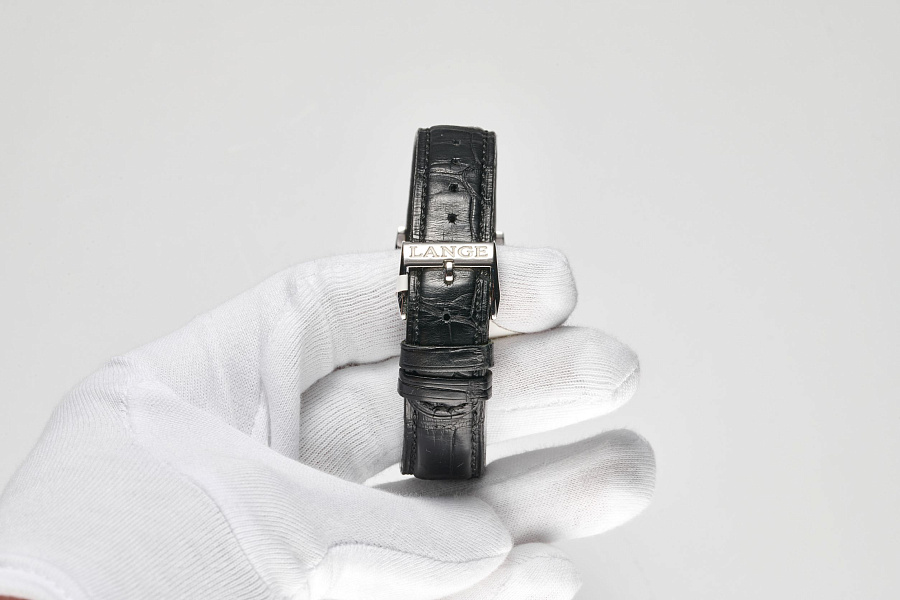 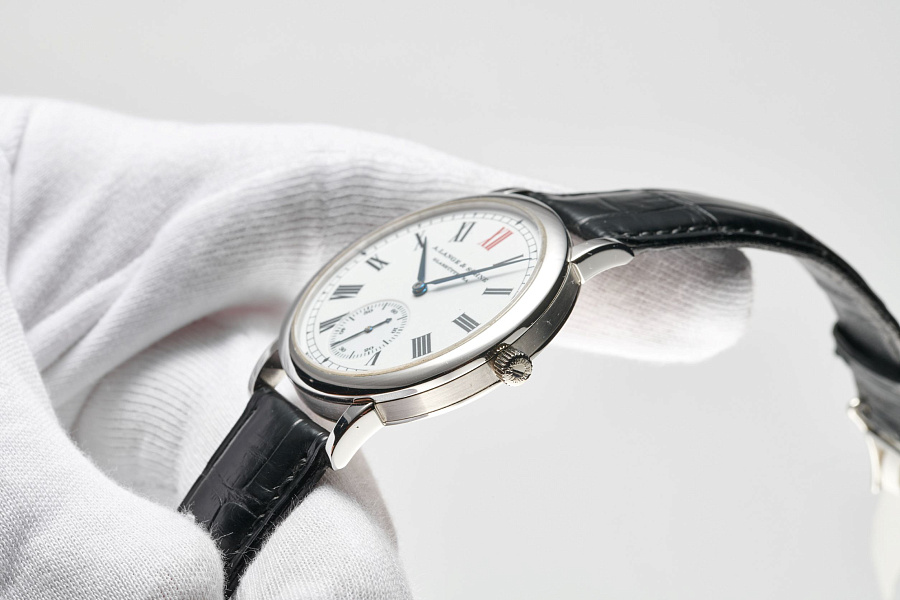 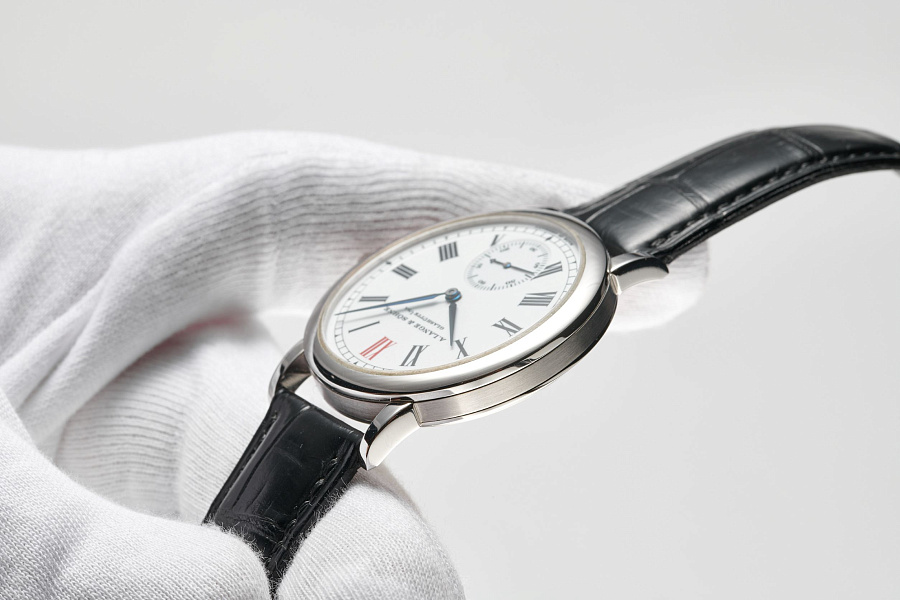 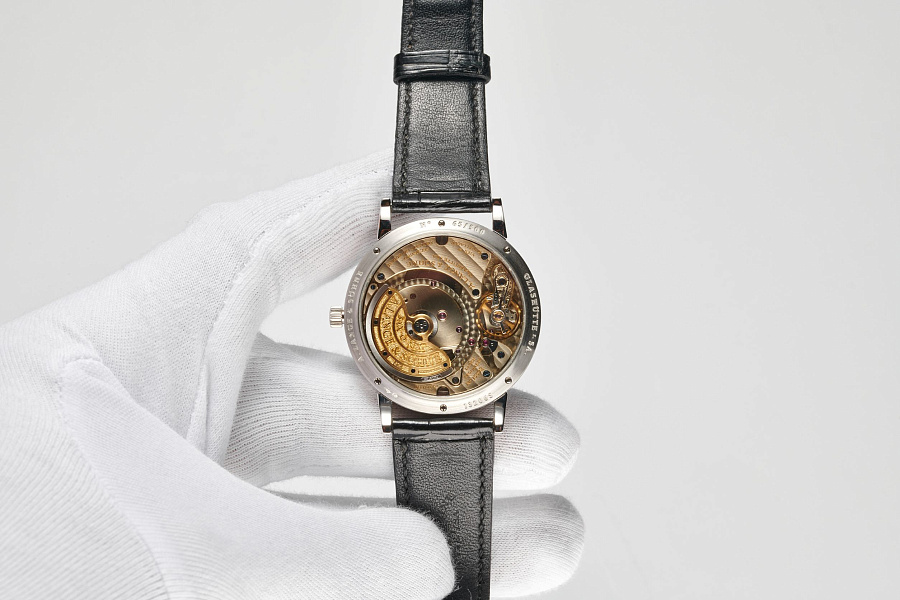 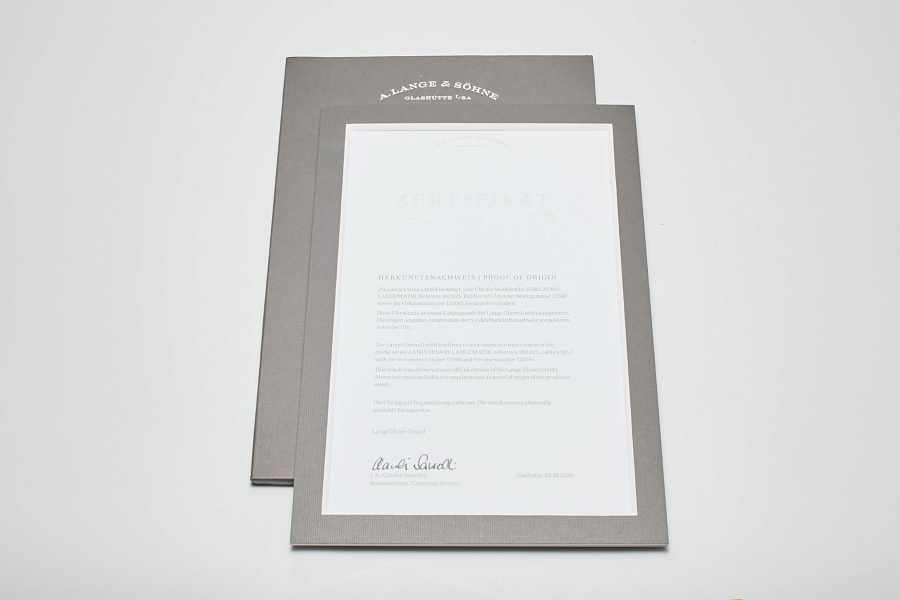 The present reference was launched in 2000 to commemorate the new millennium, the 10th anniversary of A. Lange & Söhne’s rebirth, and the 10th anniversary of German reunification. It based on the Langematik, the first self-winding wristwatch from A. Lange & Söhne, introduced in 1997 and powered by the newly developed L921 SAX-0-MAT caliber. The Langematik initial references, according to the brand’s tradition, were completed with solid silver dials – in black, ‘champagne’, silver-plated or rhodium-plated. The brand offered two basic versions of the Langematik, with or without the signature big date. The present reference was equipped with a non-date movement and a sophisticated enamel dial, created to embody the style of the classic A. Lange & Söhne pocket watches, but, of course, taking into account the specific perception of a wristwatch.

The enamel dial was produced using a traditional technique – so-called ‘grand feu’ enamel – with fused black markings and a prominent red XII, which greatly contributes to the unique look of the watch.

It is believed that Günter Blumlein, a businessman and visionary and the most active participant in the brand’s revival, conceived the design of the dial of the anniversary model. In particular, when designing the dial, the concept of the golden section in the ratio of the central zone of the dial and the outer edge of the peripheral minute scale was used. This principle had not been used in the design of the pocket watch dials, resulting in a unique look that makes the Langematik Anniversary Jubilee obviously different from any other contemporary classical wristwatch, including the unlimited Langematik references.

The enamel dial was produced using a traditional technique – so-called ‘grand feu’ enamel – with fused black markings and a prominent red XII, which greatly contributes to the unique look of the watch. Moreover, it is unique in the truest sense of the word, since the winning design has never been reproduced by the brand. An additional and very important element of the colour scheme is the cornflower-blue blued steel hands.

The case of the Langematik Anniversary Jubilee watch is characterized by harmonious proportions, with a diameter of 37mm and a thickness of 8.6mm. The thin profile is perfectly complemented by the heavy platinum from which the case is made. The sapphire caseback reveals the beautifully decorated caliber L 921.7 Sax-0-Mat featuring a bidirectional micro rotor in 21k gold and platinum as well as the signature hand-engraved balance cock.

Caliber L921.7 Sax-0-Mat, an A. Lange & Söhne in-house self-winding movement, was developed on the base of the L921.2 caliber (non-date version, while L921.4 features a big date). The designation L921.7 was introduced due to the increase in the offset of the axes of the hands, since the enamel dial is thicker than the standard silver dial.

The unique functional features with the brand’s own zero-reset mechanism for zeroing the small seconds hand when the crown is pulled out, are complemented by outstanding technical and aesthetic qualities.

Observers consider the L921 to be the finest self-winding wristwatch movement ever created by A. Lange & Söhne. The unique functional features with the brand’s own zero-reset mechanism for zeroing the small seconds hand when the crown is pulled out, are complemented by outstanding technical and aesthetic qualities. These include the eye-catching three-quarter mini-rotor, which is produced from a solid 21k gold with a platinum peripheral mass. The rotor is decorated with a high-relief engraving with a finely hammered background, which seems to be an appropriate addition to the freehand engraved balance cock with a micrometric screw regulator and a swan-neck flat spring. The mainspring barrel delivers power for up to 46 hours.

In the finishing of the movement, we find the A. Lange & Söhne style at its best. The untreated German silver three-quarter plate and other movement bridges are adorned with a Glashütte ribbing (a type of Côtes de Genève) and the inscriptions, which are engraved and gilded. The mainplate, also in untreated German silver, reveals a perlage finishing. The chamfers are bevelled and mirror polished, the screws are blued, and the escape wheel bridge cap is mirror-polished by hand. Movement parts in German silver eventually develop a golden-grey patina, typical of this material, which, as we observe in the present example, creates a rich warm hue, unusual for movements with standard nickel or rhodium plating. This has long become one of the valuable features of Lange calibers.

The A. Lange & Söhne Langematik Anniversary Jubilee Limited Edition Ref. 302.025 should be regarded as an excellent purchase for the collector who desires an outstanding, very rare and attractive limited-edition wristwatch from a world-famous traditional watch brand, the undisputed market leader in German high watchmaking. The combination of rare design features, including the white enamel dial, which is extremely rare for a modern A. Lange & Söhne wristwatch, a charismatic “XII” numeral made in red, along with high-end self-winding caliber, one of the best automatic movements of modern times, make the present lot highly desirable. The exquisite finishing of the movement’s parts and its typical Lange appearance will impress the heart of any connoisseur, and A. Lange & Söhne’s reputation in these aspects should be recognised as impeccable.