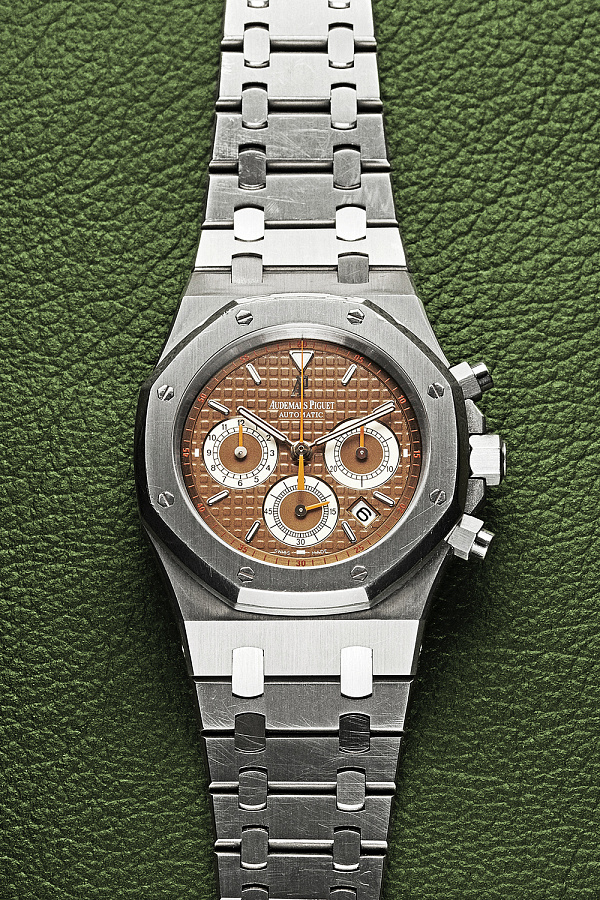 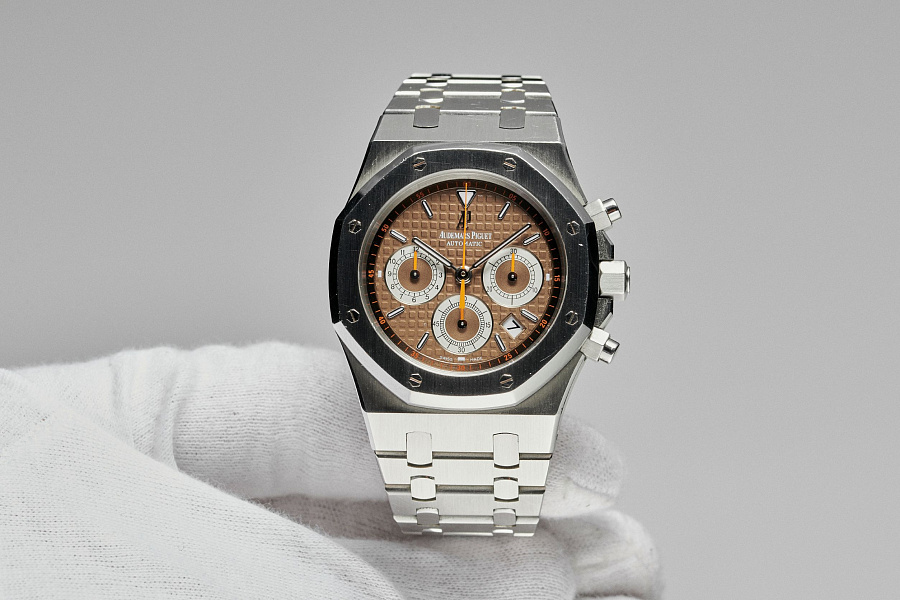 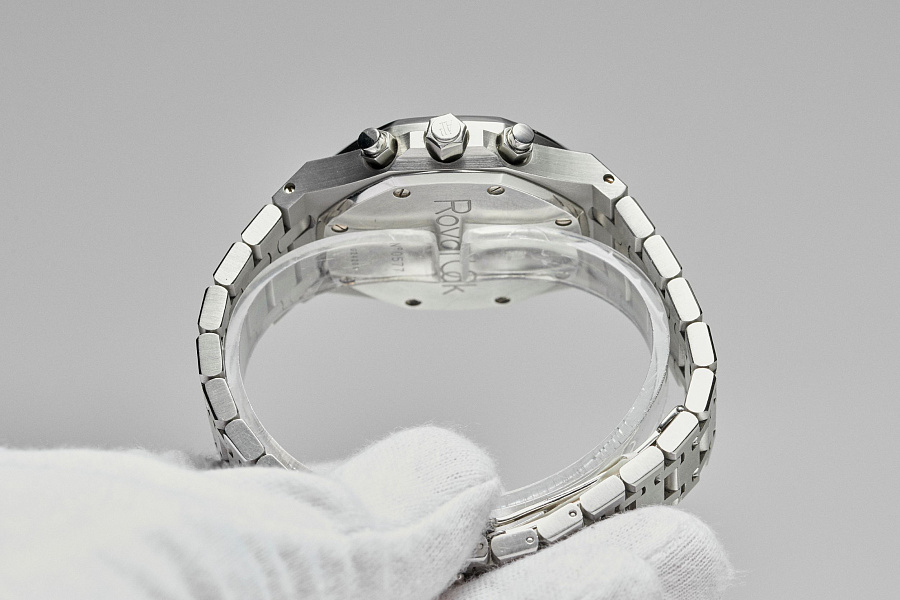 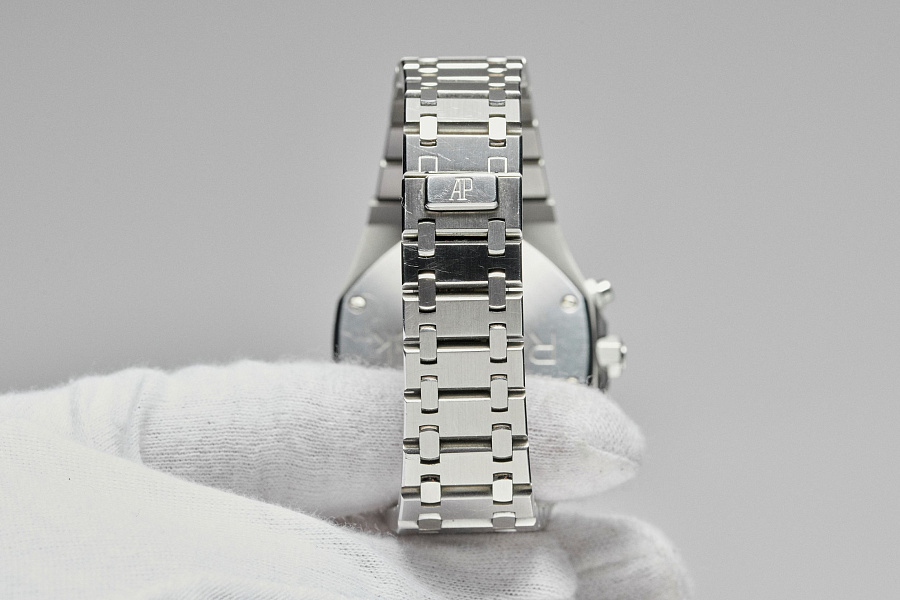 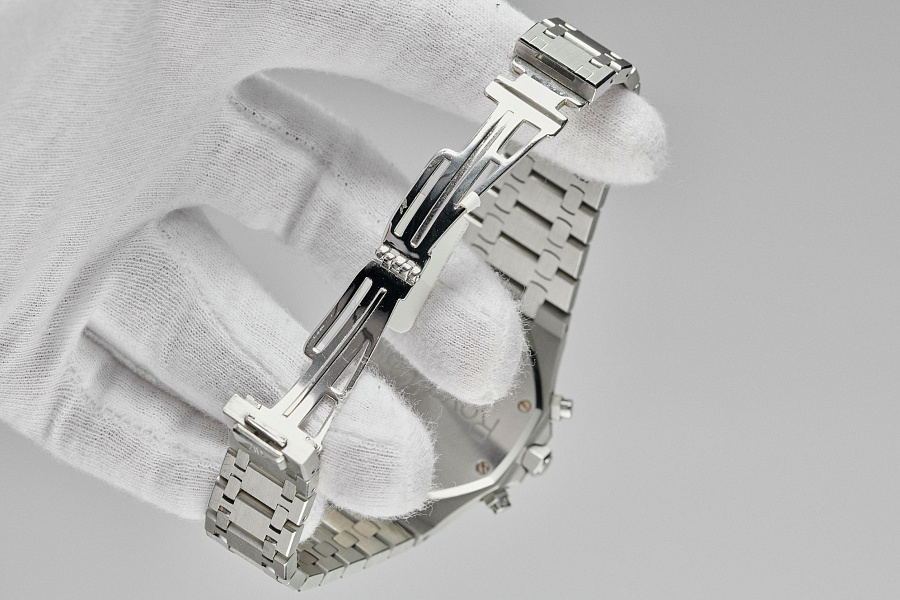 The present lot definitely stands out due to the charismatic combination of its Havana-brown dial and classic enlarged ‘tapisserie’ pattern, and ‘Roundel’ counter design with contrasting orange accents.

Ref. 26300ST was produced in stainless steel with many dial options, from Ref. 26300ST.OO.1110ST.03 to Ref. 26300ST.OO.1110ST.08, of which just two references feature distinctive ‘Roundel’ dials: the present reference, featuring a brown dial, and Ref. 26300ST.OO.1110ST.07, with a blue dial. The specialty of the ‘Roundel’ dial is in the design of the counters, which have a contrasting (in this case, silvery) circular outline and a central zone in the same colour as the main dial. The dials of this style give the watch a distinctly sporty feel, which is why they are often referred to as racing dials. We use the designation ‘Roundel’ because the counters of this design are similar to the characteristic RAF roundel emblems applied as an identification mark, painted on military aircraft to identify them to other aircraft and ground forces. The other features of the reference 26300 dial are the original Gerald Genta Royal Oak rounded baton gold appliques and hands with luminous coating, printed (instead of applied) luminous rectangular markers at 3, 6 and 9 o’clock, and a large applied luminous triangular marker at 12 o’clock.

The present lot definitely stands out due to the charismatic combination of its Havana-brown dial and classic enlarged ‘tapisserie’ pattern, and ‘Roundel’ counter design with contrasting orange accents. Our research shows Ref. 26300ST.OO.1110ST.08 has two main varieties in the execution of the dial – Type1 features small print with the ‘4’ of the hour counter very close to the inner ‘railway’ scale, and Type2 features large print with the ‘4’ of the hour counter distant from the inner ‘railway’ scale. Type2 appears to be significantly rarer, making it an extremely attractive object for collecting and research.

The Royal Oak Chronograph Havana-brown ‘Roundel’ Counters Ref. 26300ST.OO.1110ST.08 Type2 appears to be an excellent purchase for the collector who desires a very rare, attractive and charismatic chronograph wristwatch from a world-renowned traditional watch brand, one of the undisputed leaders in the haute horlogerie watch market. Audemars Piguet Royal Oak collecting is becoming more and more attractive, and connoisseurs of this iconic design are in search of new themes. The situation is such that chronographs should be recognised as one of the most promising areas, since the market of classic ‘Jumbos’ has basically reached a point of equilibrium. The present watch is remarkable as a second-generation chronograph of the legendary Royal Oak design, with distinctive and sporty ‘Roundel’ counters on a charismatic Havana-brown dial of a very rare Type2 ‘large print’ dial, undoubtedly making this lot even more attractive.