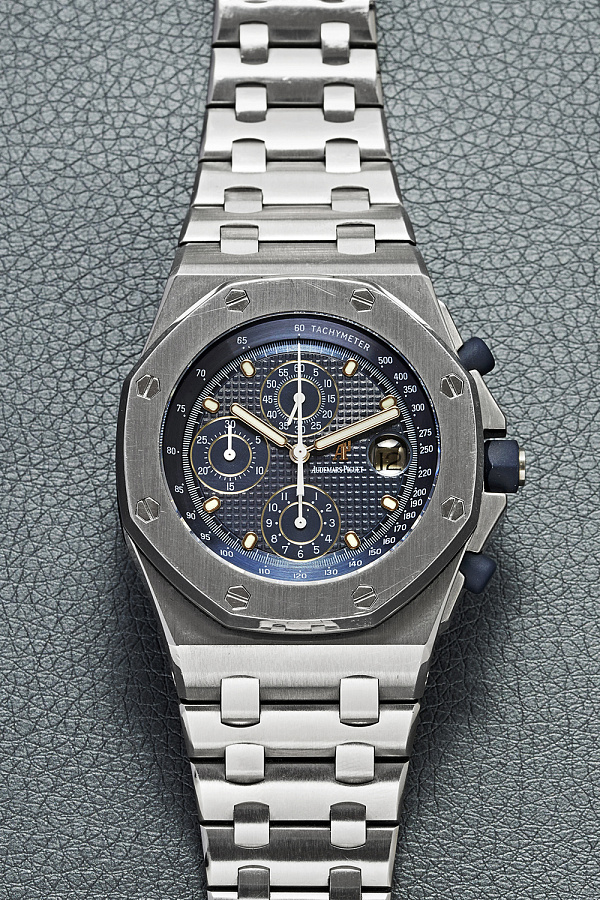 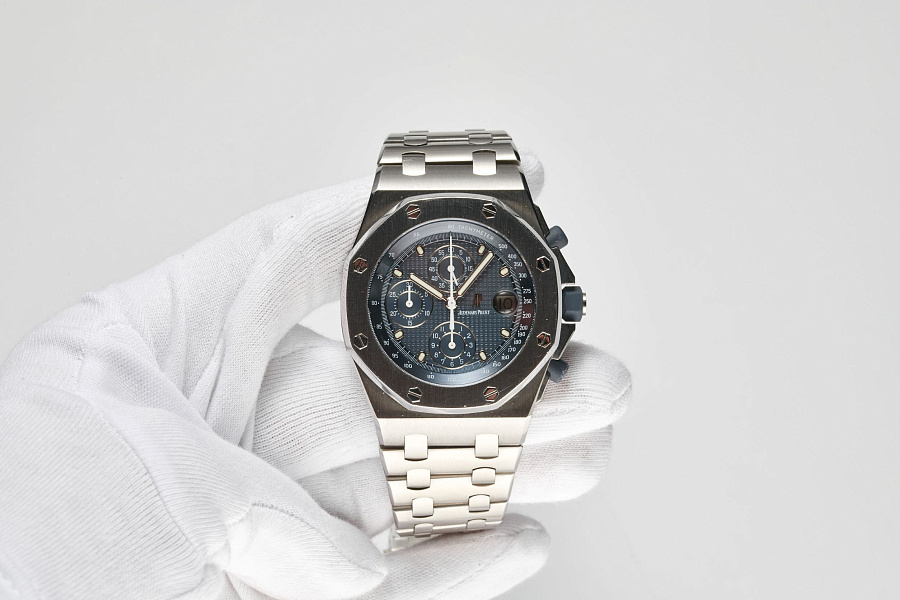 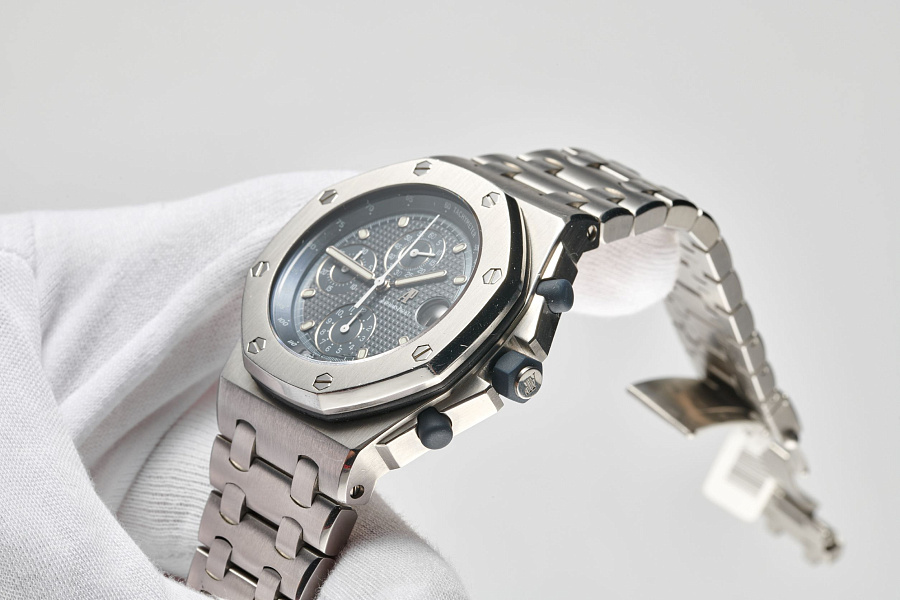 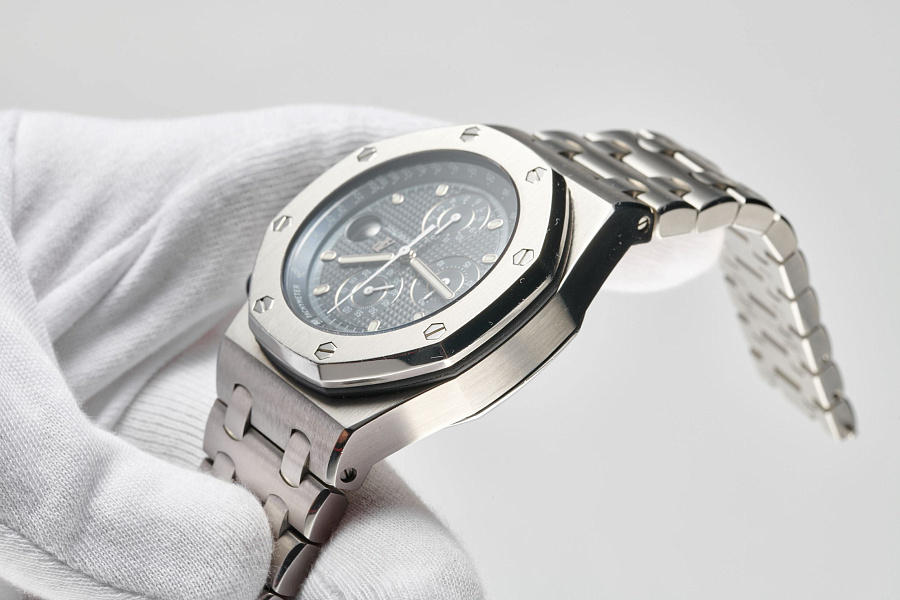 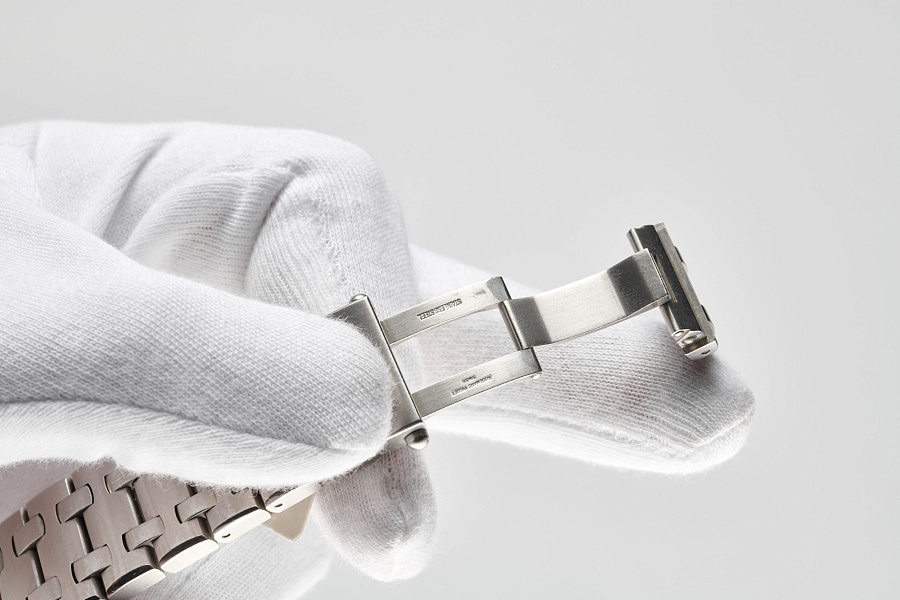 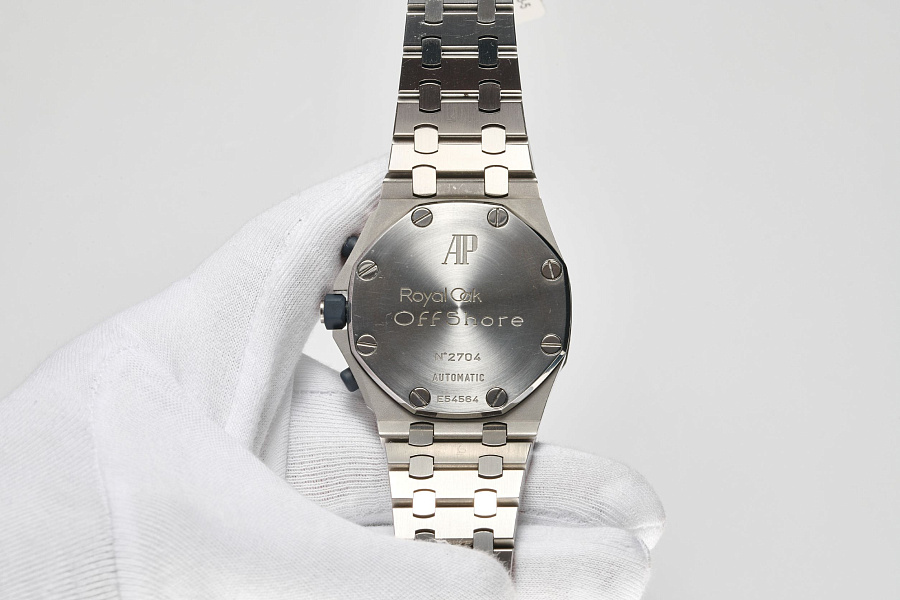 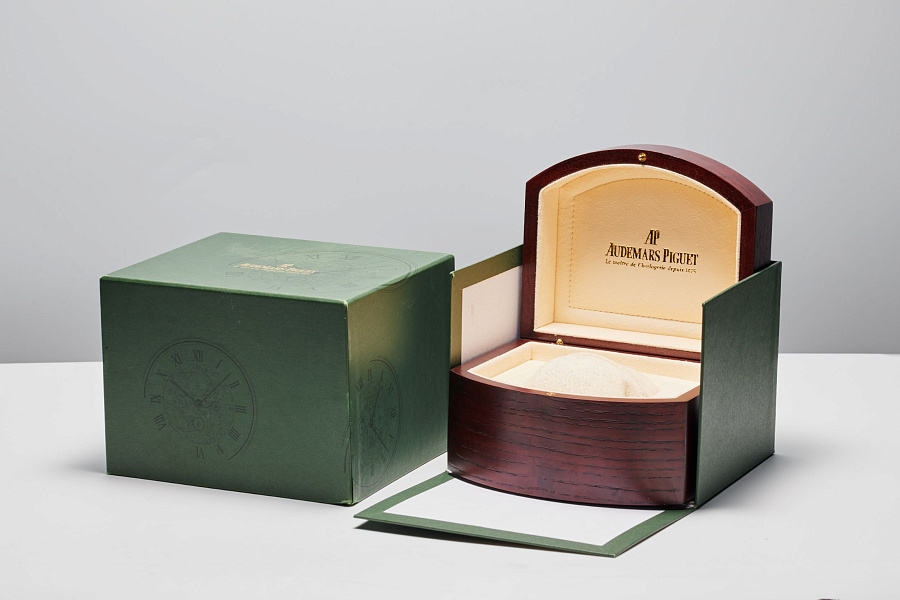 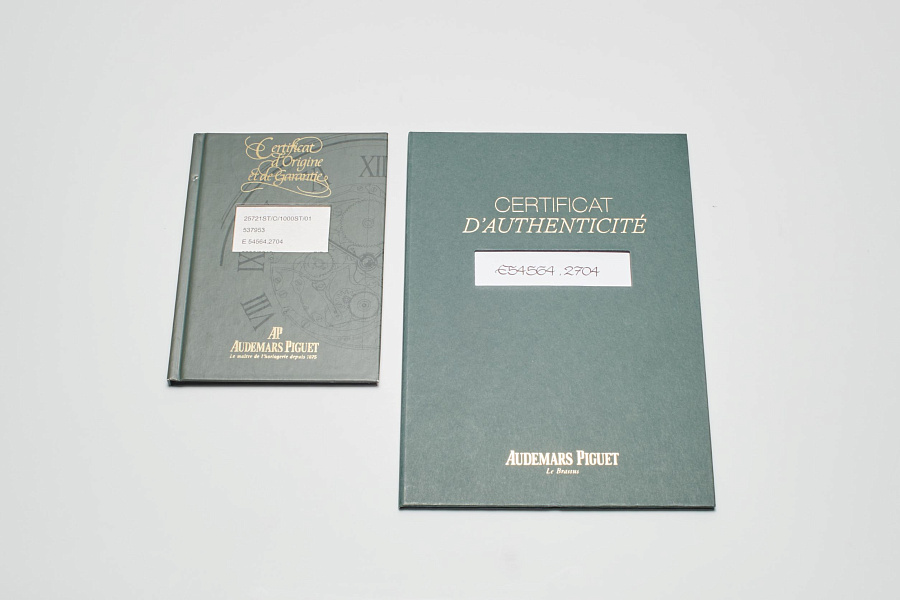 The Royal Oak Offshore of Audemars Piguet is a highly attractive collectible series. Since the launch of the collection in 1993, a huge variety of references, designs, limited editions and special editions have appeared. However, there are several basic models, without which any collection of Royal Oak Offshore should be perceived as incomplete. Of course, this includes the original reference 25271 in stainless steel with a dark-blue ‘tapisserie’ dial.

The present lot belongs to the initial Royal Oak Offshore reference 25721ST.OO.1000ST.01, launched in 1993. Legend has it that it was at the exhibition in Basel where it came to be nicknamed ‘The Beast’, due to its staggering proportions which were unusual for the tastes of those times. According to watchcollectinglifestyle.com, no more than 2,600 examples of ‘The Beast’, with its signature blue dial, were ever produced, with approximately 1,250 pieces falling within the D-series production period, and approximately 1,350 for the E-series. The production span is divided over several generations, according to the changes in caliber and design attributes: calibers 2126/2840, 2226/2840, or 2326/2840; smaller (‘10-row’) or slightly larger (‘9-row’) ‘tapisserie’ relief pattern; the absence or presence of the “OffShore” engraving on the caseback; the style of the engraving on the caseback; and the execution of the bracelet and its clasp. Therefore, the collecting of ‘The Beast’ Ref. 25721ST is of great interest in view of the possibility of thorough research into the subject and discovering rare varieties or transitional types. The present example’s execution corresponds to the latest E-series numbering of the case and 27xx serial model number, E-545xx case number with an enlarged 9-row ‘tapisserie’ pattern, second-generation 2226/2840 caliber, second-generation bracelet and clasp, and distinctive rounded double “f” in the “OffShore” engraving.

This is a true Offshore ‘The Beast’, noticeable, impressive and charismatic, with a heavy 42mm stainless steel case and bracelet, legendary dark-blue ‘tapisserie’ dial, and high-end craftsmanship characteristic of the brand’s production

This is by far one of the most recent steel models of the 25271 produced. According to watchcollectinglifestyle.com, “we have not seen any examples of the Audemars Piguet Royal Oak Offshore reference 25721ST.OO.1000ST.01 past the E-54500 production series. The last documented example we’ve seen falls within this production number and not past the 2600 individual serial number”.

The present watch is powered by the second-generation caliber 2226/2840. It is worth remembering that the Ref. 25271 of the first 200-piece batch was equipped with a modular caliber 2126/2840 with a chronograph function. The automatic movement was based on a movement-blank supplied by Jaeger-LeCoultre (caliber 889), modified to 21,600 vph, while the chronograph module 2840 is based on a kit from the Dubois Dépraz factory. Both are long-term partners and suppliers of Audemars Piguet. Later, until 2005, the ROO was equipped with a second-generation movement – caliber 2226/2840, which used the updated version of a Jaeger-LeCoultre automatic caliber 889/2 (28,800 vph), while in 2005 and early 2006 Audemars Piguet carried out a further modernisation, switching to the caliber 2326/2840 with a modernised basic Jaeger-LeCoultre 899 – this is the third-generation ROO chronograph movement, produced until 2014, when the brand made the transition to the in-house basic caliber 3126 movement.

The Royal Oak Offshore ‘The Latest Beast’ Ref. 25721ST.OO.1000ST.01 E-series appears to us to be an outstanding collectible, representing one of the last examples of this reference ever released. It would definitely be an excellent purchase for the collector who desires an attractive, collectible and rare chronograph wristwatch from a world-renowned traditional watch brand, one of the undisputed leaders in the haute horlogerie watch market. The present lot is remarkable as an example of the final period in the development of the original Royal Oak Offshore Ref. 25721ST, and therefore a must-have for the discerning collector. At the same time, this is a true Offshore ‘The Beast’, noticeable, impressive and charismatic, with a heavy 42mm stainless steel case and bracelet, legendary dark-blue ‘tapisserie’ dial, and high-end craftsmanship characteristic of the brand’s production, making the present lot not only a collectible, but also a highly desirable daily wearer.