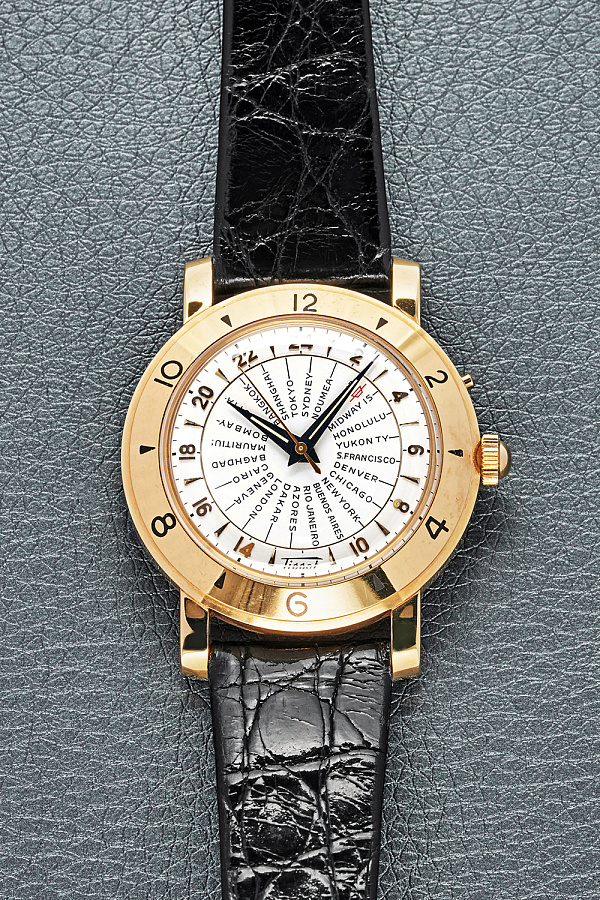 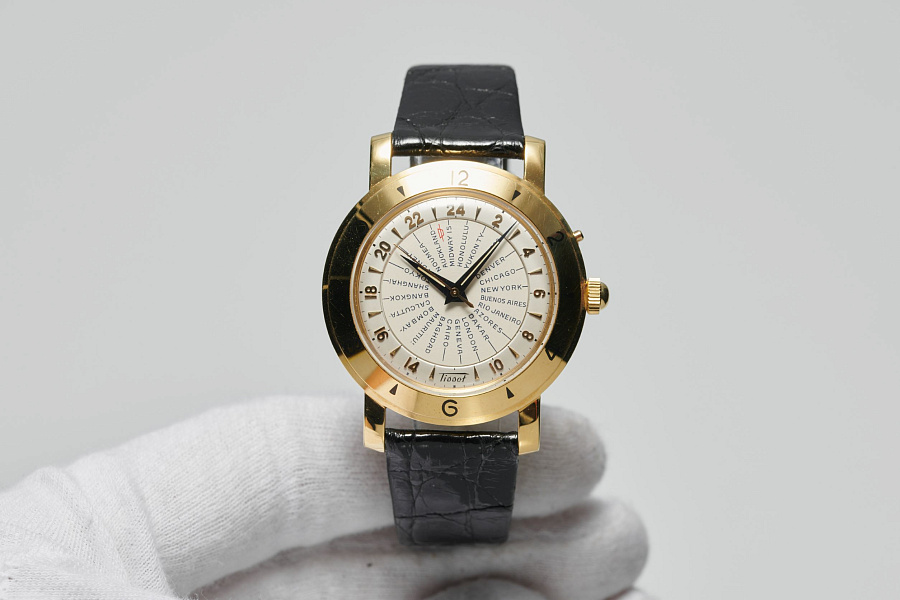 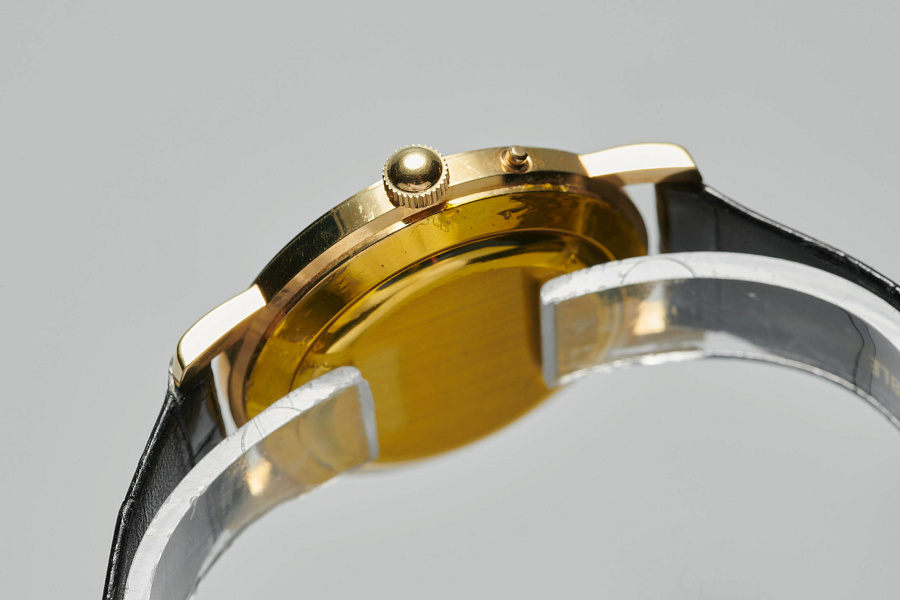 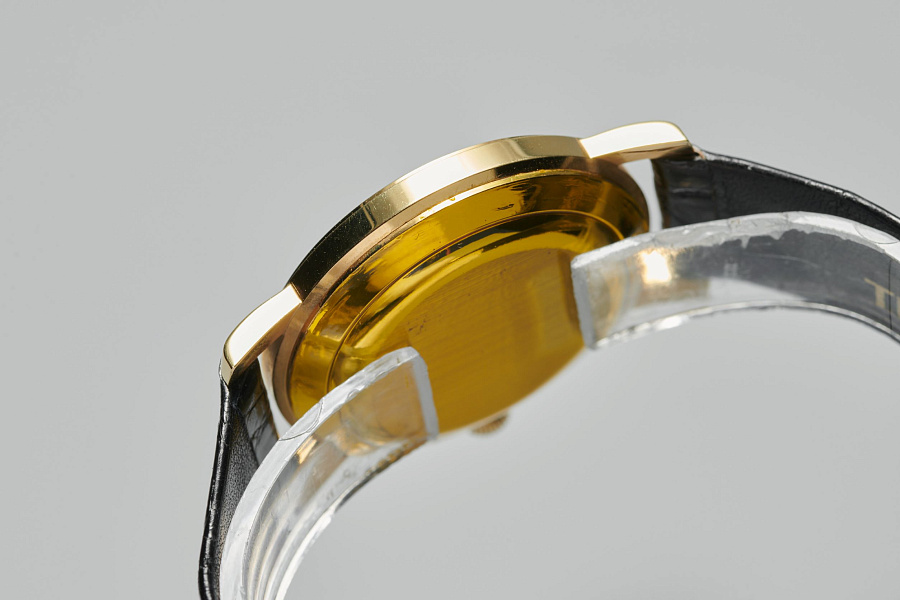 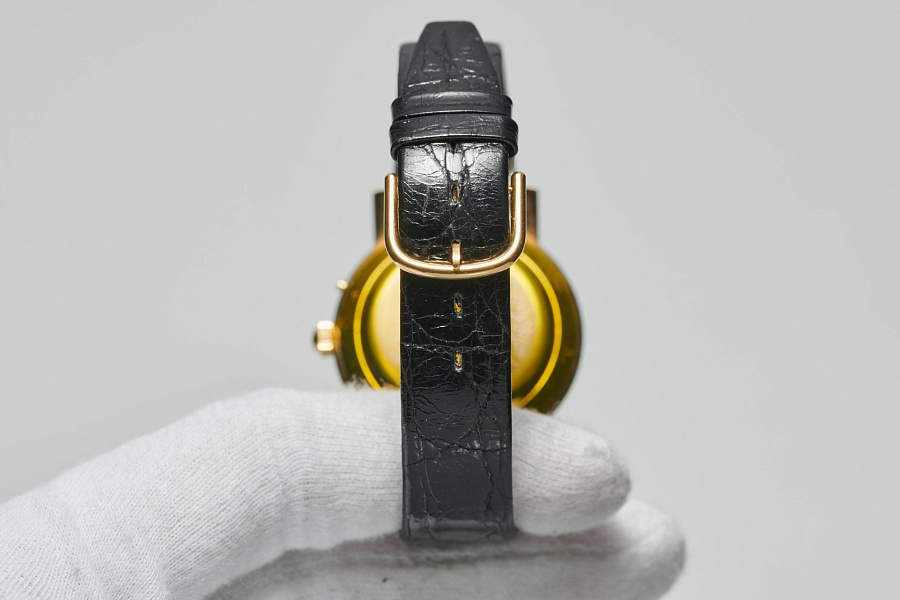 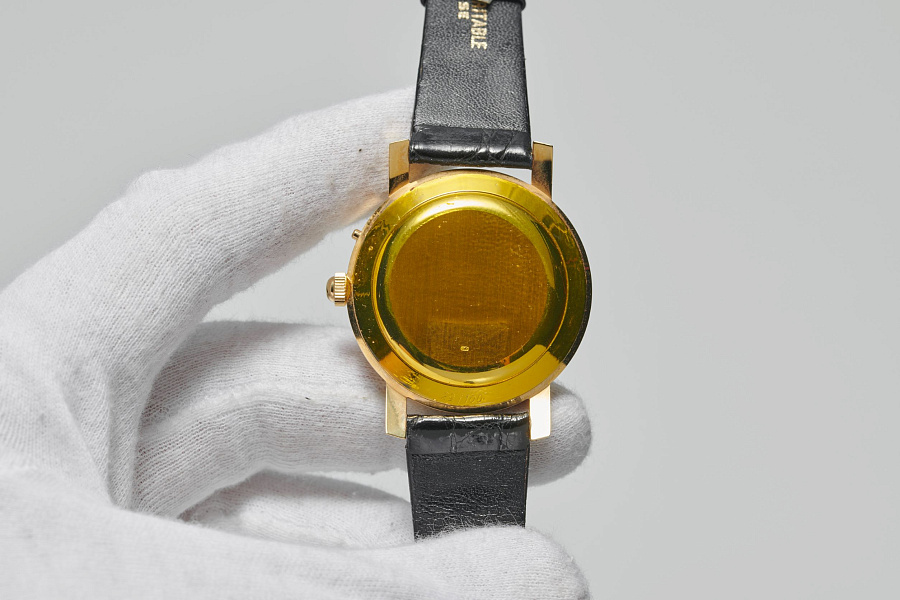 Attractive and rare, the 18k yellow gold Navigator Ref. OR 4001 is powered by the self-winding bumper caliber 28.5-N-21T. Based on Tissot’s first automatic calibre 28.1, launched in 1944, caliber 28.5N-21T features a mechanism that allows the local time to be set separately by the crown with the aid of an additional pusher at 2 o’clock. The characteristic feature of this watch and its caliber is its unique design with world time system, an alternative to that invented by Louis Cottier in the early 1930s. The dials of the Louis Cottier system have a 24-hour scale that is in continuous rotation, meaning it constantly passes along the list of cities of the world, showing the local time in each of them. The Tissot Navigator features an alternative system with a fixed 24-hour scale on the peripheral ring of the dial and a constantly revolving inner disk with a list of 24 cities around the world. In the normal modes of operation and time correction, the central 12-hour hand is synchronized with the 24 cities disk. In order to separately set the local time, one should press the button at 2 o’clock while the crown is extended outwards.

The present watch is an extremely interesting and historically important watch, which for the first time combined a world time indication with an automatic winding, making the watch with worldtimer a practical daily wearer.

The Tissot Navigator is a very attractive and historically significant collectible, as it was the first to incorporate a world time system combined with an automatic winding – at least a year before Rolex did the same with its GMT-Master.

Tissot embarked on the development of the Navigator in the late 1940s, with the 1853–1953 centenary approaching. In fact, according to many reports, the anniversary series watches were sold before 1953 – it is believed by as early as 1951. The Tissot Navigator watches were available in stainless steel, 14k gold and 18k yellow gold, as the present watch, with the latter released in a limited edition of 100 pieces. There is no available information about the limitation of the other models. It is likely that Navigator watches were also produced in other versions. The production span of the Tissot Navigator ended in the 1960s.

The present Tissot Navigator Ref. OR 4001 would appear to be an extremely attractive purchase for the collector, offering the opportunity to obtain an attractive, very rare and complicated mechanical wristwatch from a world-famous traditional watch brand. This watch is an impressive showpiece of Tissot’s ability to produce budget-friendly and beautiful counterparts to much more expensive models from other brands with the same function. The present watch is an extremely interesting and historically important watch, which for the first time combined a world time indication with an automatic winding, making the watch with worldtimer a practical daily wearer. The 36mm size suggests a classic look, while the solid gold case, along with its rarity thanks to its limited production, add value and appeal to this lot.