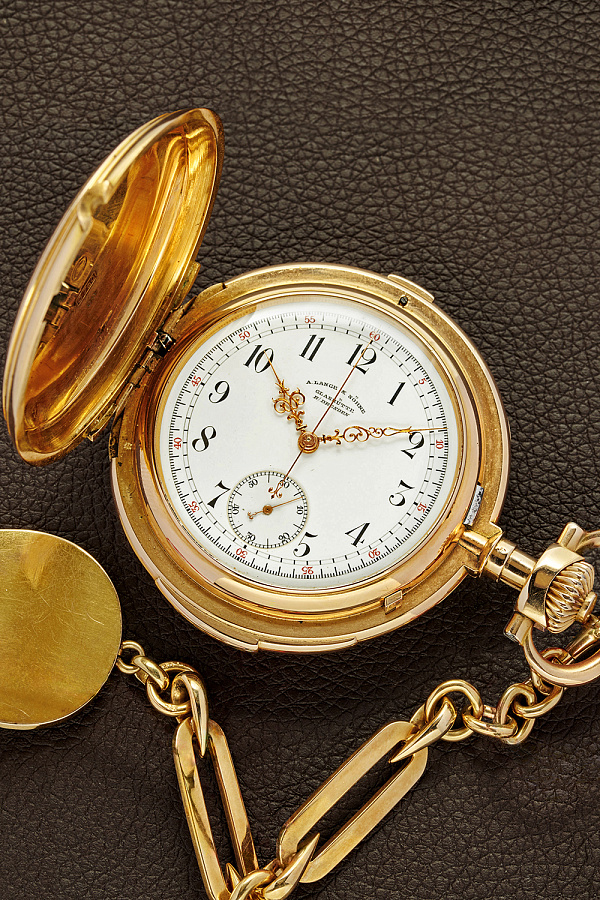 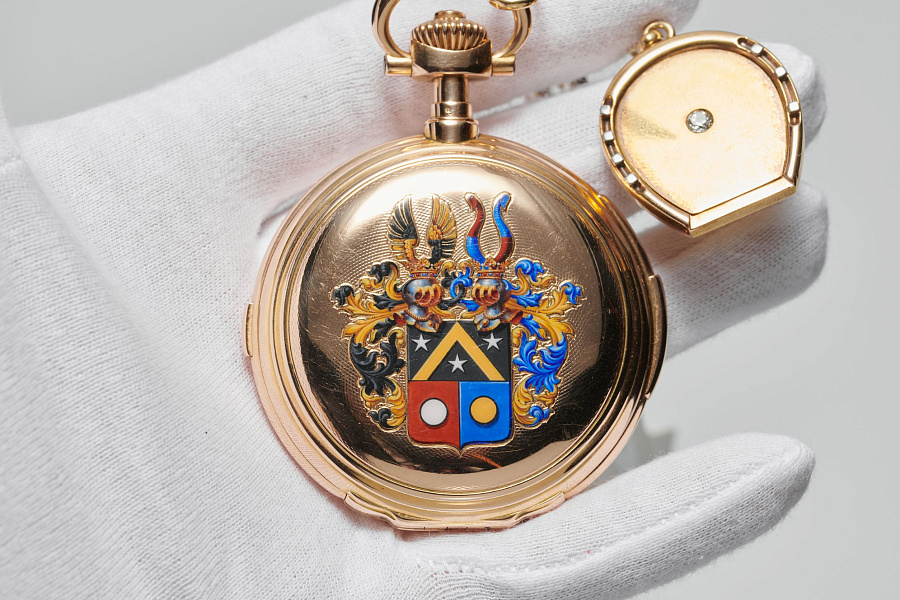 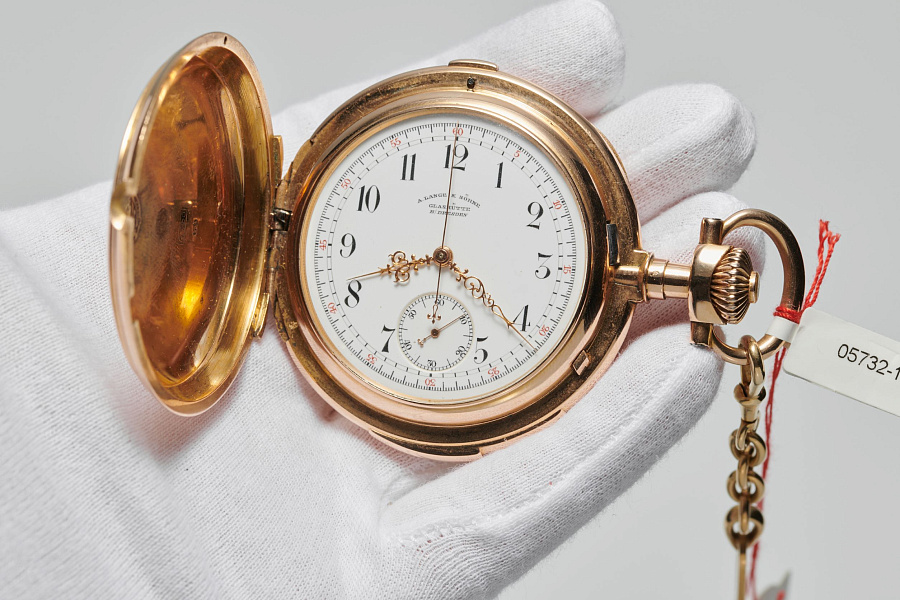 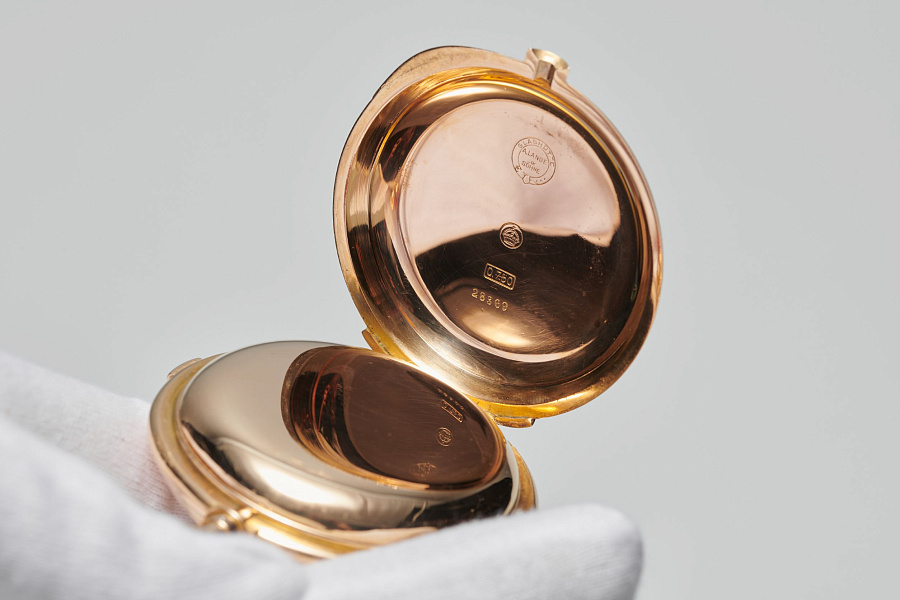 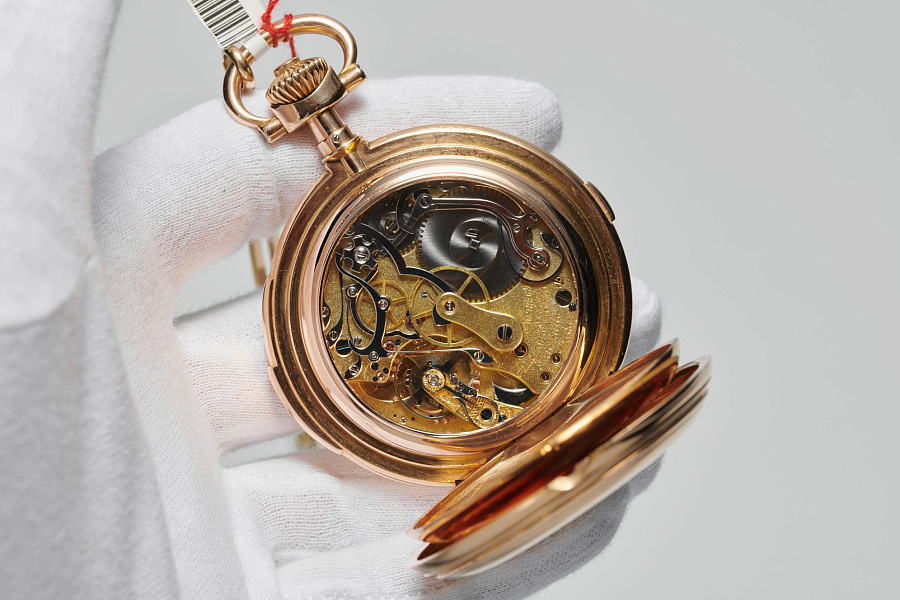 A. Lange & Söhne pocket chronographs are among the most beautiful pages of the historical heritage of the venerable German brand. The typical Lange chronograph movement, visible when the caseback is open, shows the best signs of the brand’s watchmaking artisanship, combining pleasing designs of complex clockwork with outstanding fine workmanship on all components. Elongated, thin, gracefully curved steel levers and flat springs are naturally decorated with chamfering and polishing. The lever’s rounded lugs at the axle or jewel mount are accompanied by carefully polished internal corners, and the groove around the hole also features a polished chamfer. This is complemented by the traditionally high-quality finishes of the Lange base caliber, the present example coming with gilt and a frosted finish, an engraved balance-cock with diamond end-stone, a swan-neck precision index adjuster, a compensation balance with gold screws, gold lever and escape-wheel, and a Breguet blued hairspring.

A. Lange & Söhne pocket chronographs are among the most beautiful pages of the historical heritage of the venerable German brand.

Quarter repeating chronograph pocket watches were made by A. Lange & Söhne from 1880 to 1941, according to Reinhard Mais, author of ‘A. Lange & Söhne. The Watchmakers from Dresden’ book. According to him, about 65 pieces were made during this period. Early specimens, including the present example, were based on the ‘rocking-wheel’ design, resulting in the unusual appearance of the chronograph movement mounted on the back of the caliber with only one transmission wheel, while the classic design has two additional wheels. Presumably, the Swiss company Louis Elisée Piguet from Les Brassus, a specialist in complications’ movement-blanks, was the supplier of such a mechanism. In particular, this suggests the presence of a column wheel of a characteristic design with five round milled recesses. The big chronograph’s wheel design has the advantage of being an extremely large central wheel, which creates beauty. Moreover, the use of such a wheel can reduce the unpleasant effects of uncontrolled jumping or recoiling of the chronograph’s central hand when starting the chronograph.

The present example comes in a spectacularly luxurious full-gold case (including cuvette), which is decorated with grain d’orge guilloché and the coat of arms, meticulously fire enamel painted. At the end of the 19th century, such pocket watches were clearly created to emphasize the spirit and feeling of established traditions and good old times, which was achieved by using the design features of the Louis XV style from over a century earlier.

The present A. Lange & Söhne Quarter Repeater Chronograph No 28369 would appear to be an excellent purchase for the collector who desires an outstanding, rare and highly complicated mechanical pocket watch from a world-famous traditional watch brand, the undisputed leader in German high watchmaking. The present lot features the classic sophisticated functions of a quarter repeater and a chronograph of an unusual innovative design. Therefore, it appears to be an excellent example of the traditional watchmaking and craftsmanship of sophisticated pocket watches, in which A. Lange & Söhne has earned a reputation as one of the best manufacturers. The fine finishing of the movement’s parts and its exquisite and clearly very complex design will impress the heart of any connoisseur, and A. Lange & Söhne’s reputation in these aspects should be recognised as impeccable.