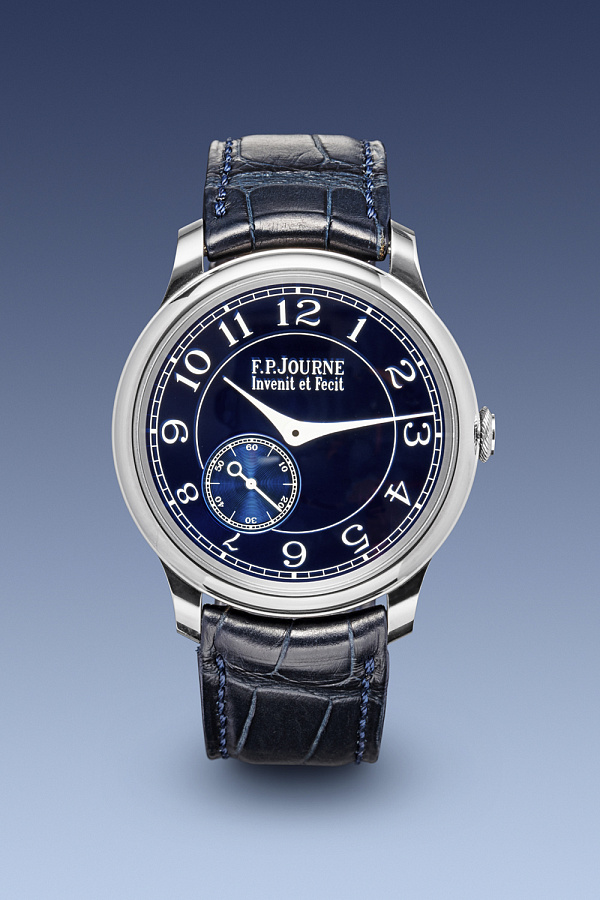 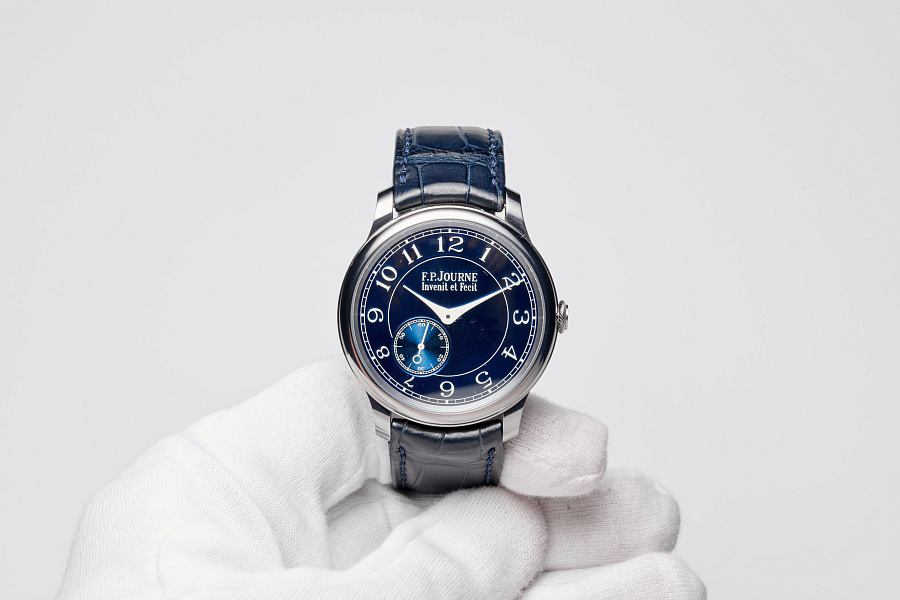 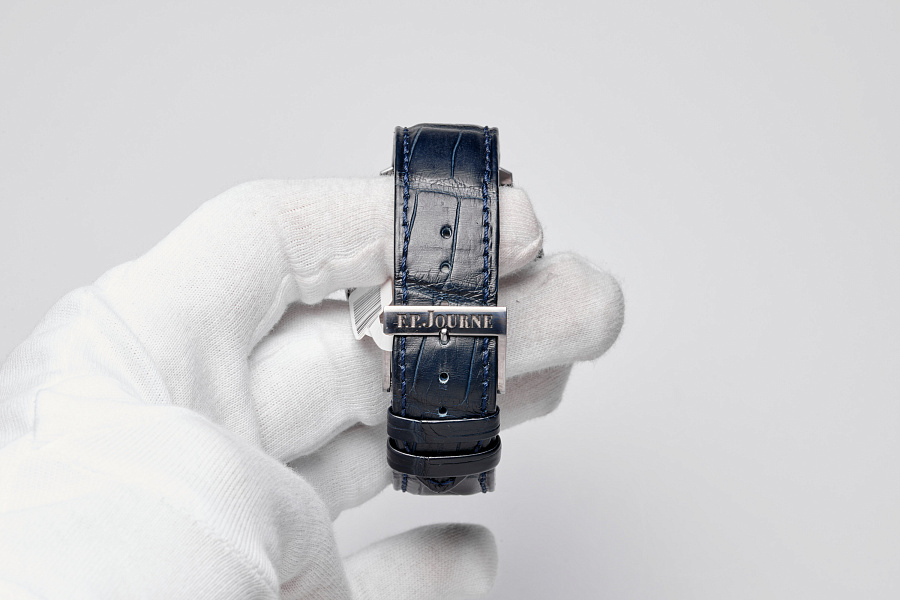 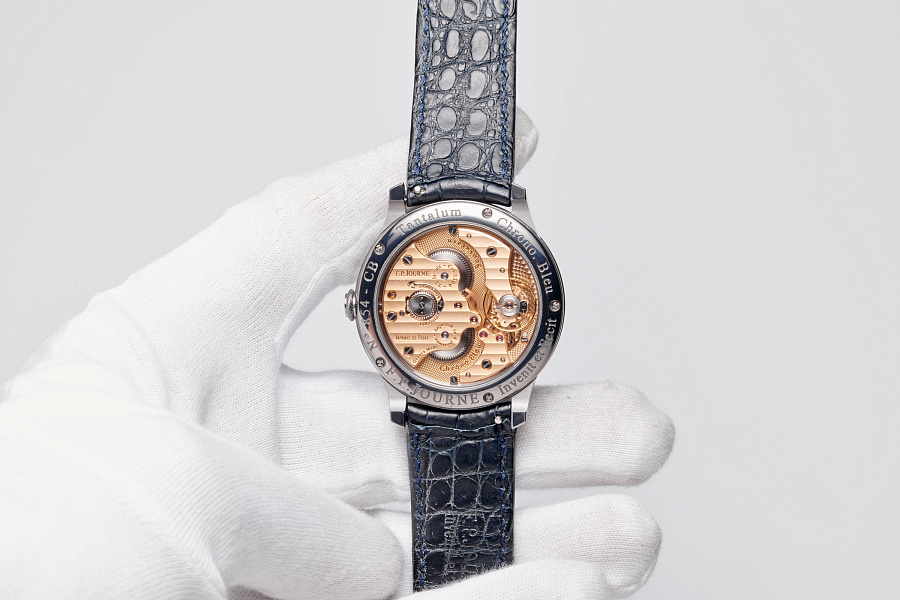 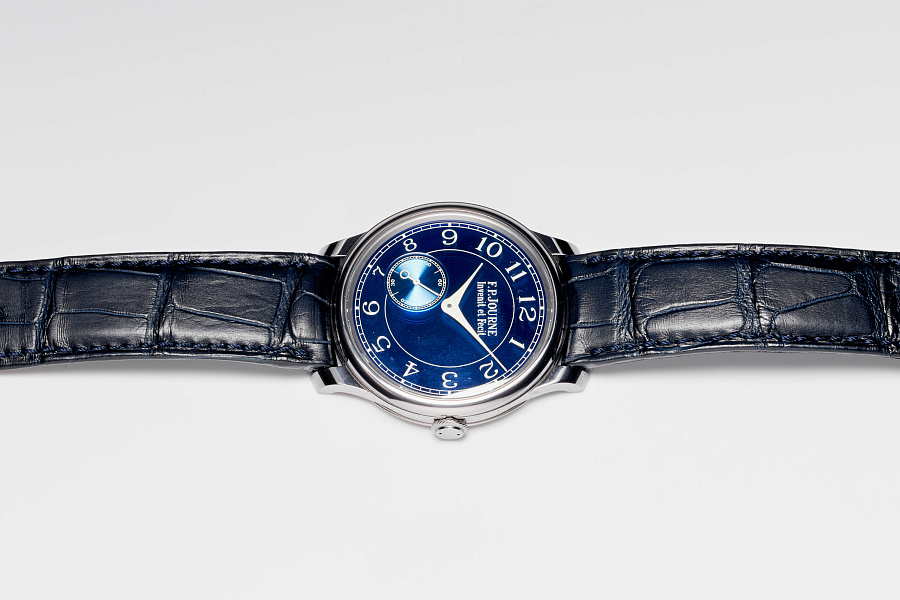 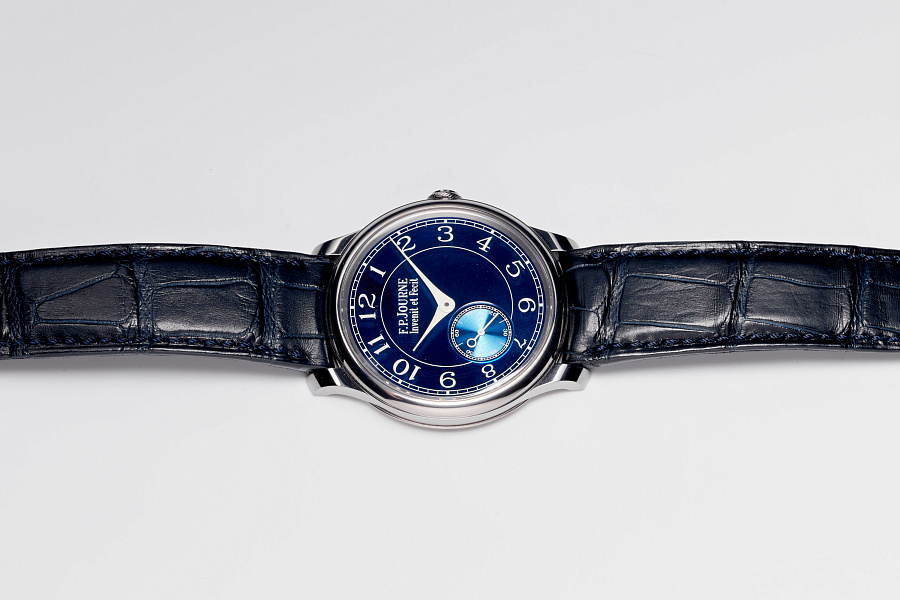 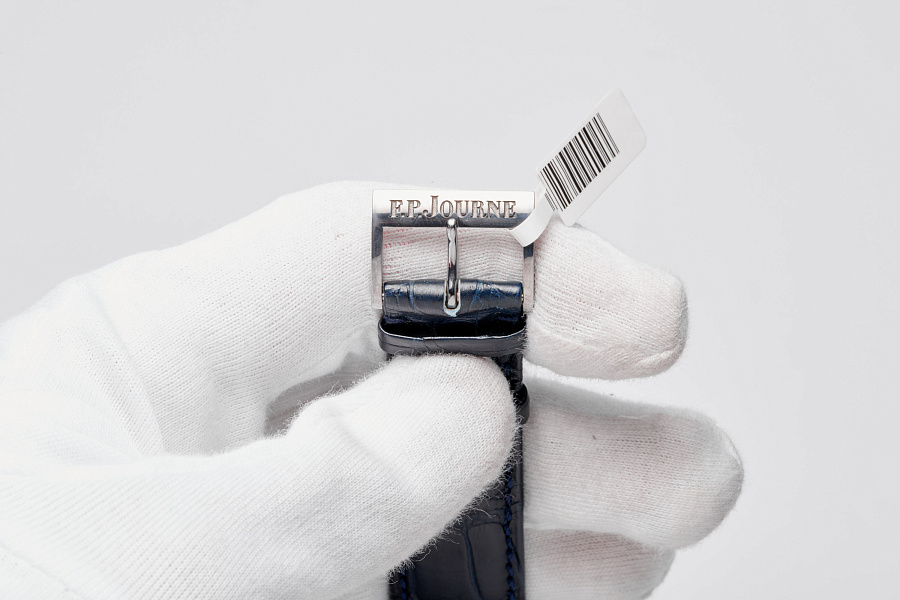 Chronomètre Bleu was reportedly developed by F.P. Journe as an entry-level timepiece (in terms of F.P. Journe collection) after the 2008 financial crisis. Instead of standard precious metal, the case was made of tantalum and the movement was slightly less complicated than the original 1304 caliber of Chronomètre Souverain, without the power reserve indicator.

The F. P. Journe Chronomètre Bleu is equipped with a hand-wound 1304 caliber. The movement is finished to a high standard with manual decoration of all parts, including chamfering and polishing. The mainplate is decorated with a barleycorn guilloché pattern and Perlage, while the bridges feature Côtes de Genève decoration. The peculiarity of the F. P. Journe movements is that since 2004 they have been produced from solid 18k pink gold, so that no protective coatings are required to create a flawless and non-patinated finish of the parts.

The Chronomètre Bleu, characterised by its rare execution, and distinctive design and appearance is considered to be one of the most sought-after F.P. Journe watches.

Caliber 1304 was designed by François-Paul Journe as a reminder of the precision movements of 19th century pocket chronometers, and with the purpose of guaranteeing accurate timekeeping. Initially, Caliber 1304 was used exclusively in the Chronomètre Souverain, which since 2005 has been introduced in a variety of designs. Later, in 2008, F. P. Journe developed for Chronomètre Bleu a simplified version of the caliber, without power-reserve indication. The newer caliber retained the same designation, 1304, along with the double-barrel system, substantial 56-hour power reserve, and a notable design characterised by separated barrels and escapement areas. A hidden gear train that is between the mainplate and the dial gives to the caliber a charming mysterious illusion that the free-sprung balance is sitting all on its own.

The watch features a dial of a deep blue colour, with the tantalum case adding the light blue-grey hue that distances the tantalum from more common precious and ‘technical’ metals. The case’s blueish sheen in addition to the rich blue dial easily gives away how the watch was named.

The Chronomètre Bleu, characterised by its rare execution, and distinctive design and appearance is considered to be one of the most sought-after F.P. Journe watches. According to thejourneguy.com, annual production of the Chronomètre Bleu remained around 190 watches until 2019, when it dropped to approximately 100 examples. The waiting list to purchase a new watch is reportedly an incredible 5 to 7 years, which makes us proud to offer the present lot as an absolutely rare chance to acquire this sought-after timepiece of a world-famous brand.

The Chronomètre Bleu Ref. CB would appear to be an extremely attractive purchase for the collector and F. P. Journe watchmaking expertise aficionado, who will receive an elegant, beautiful and rare mechanical time-only dress watch from this famous watch brand, one of the undoubted leaders in the haute horlogerie watch market. The combination of impeccable exquisite craftsmanship manifested in the solid-gold movement, fine classic design of the exotic tantalum case and the characteristic deep-blue dial with branded Arabic numeral markings, personally designed by François-Paul Journe himself, undoubtedly adds to the appeal of this lot.