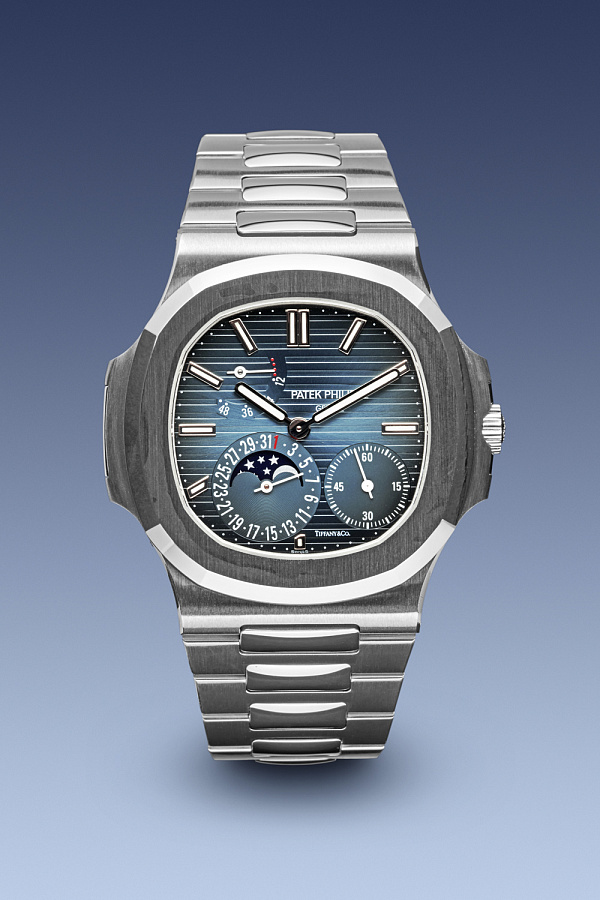 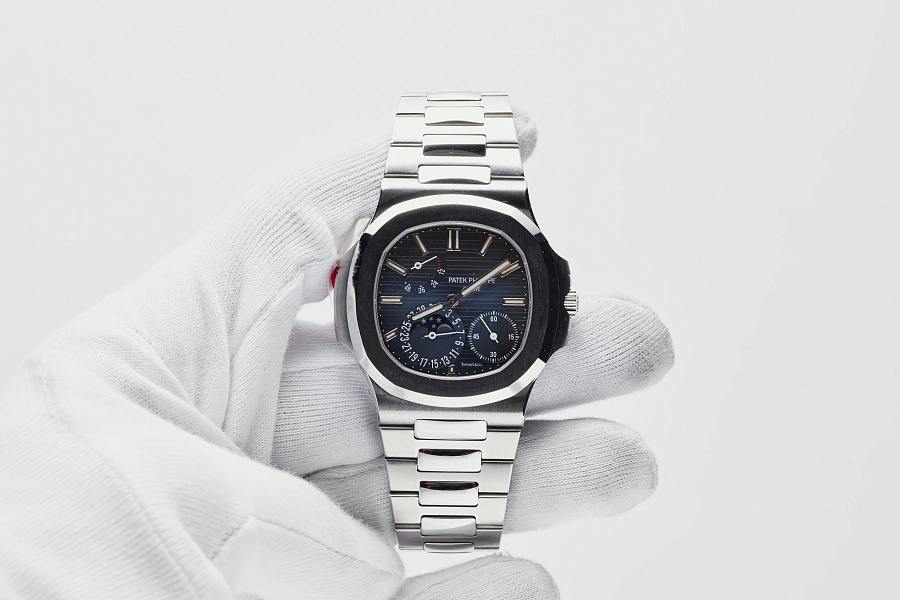 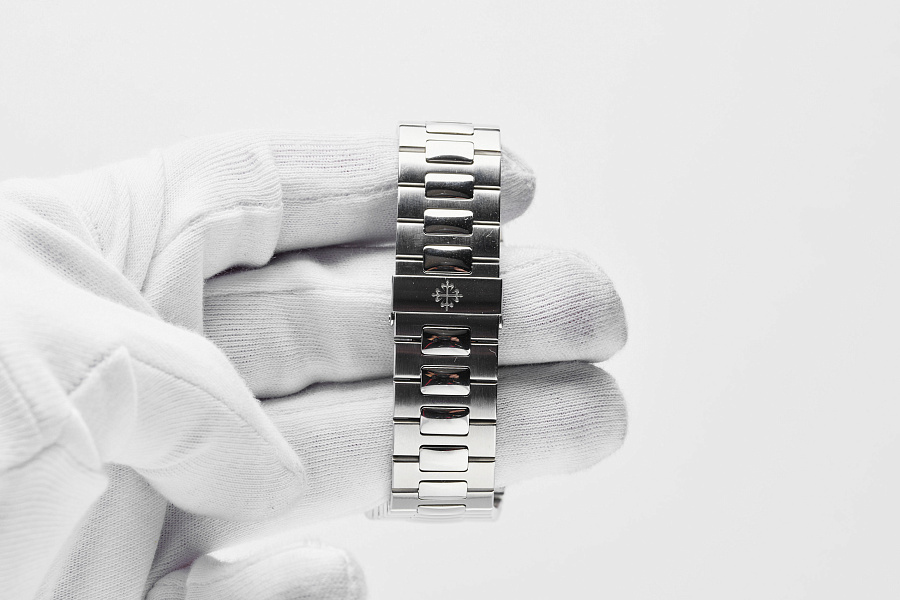 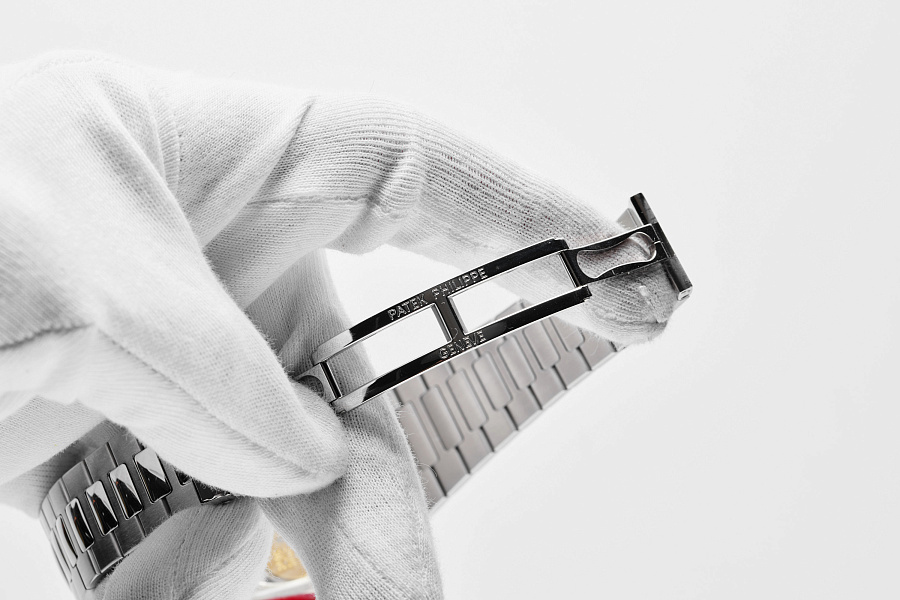 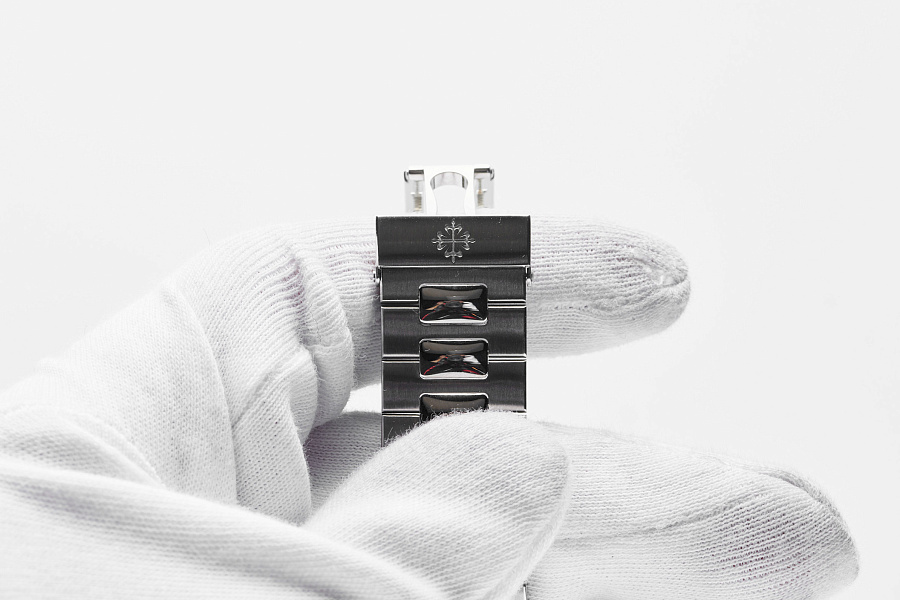 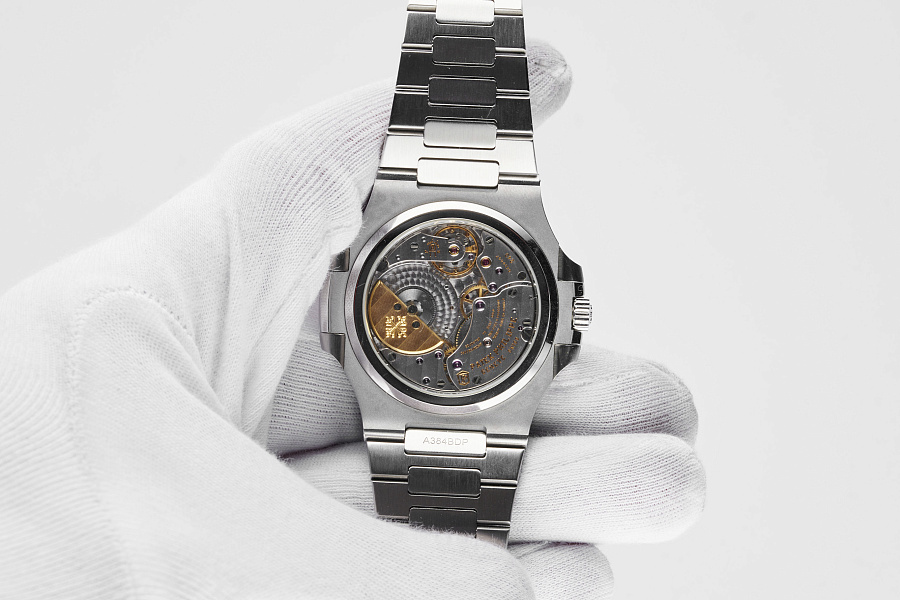 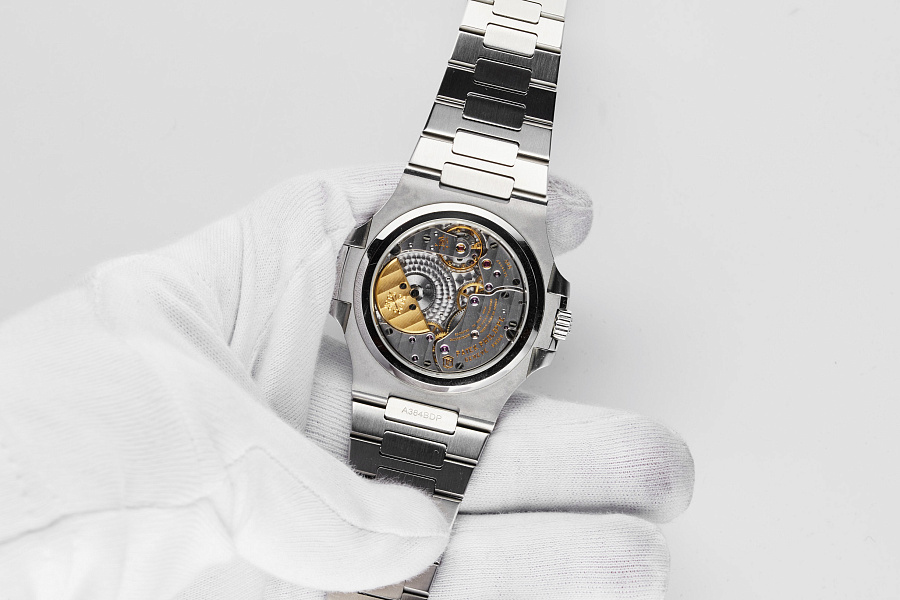 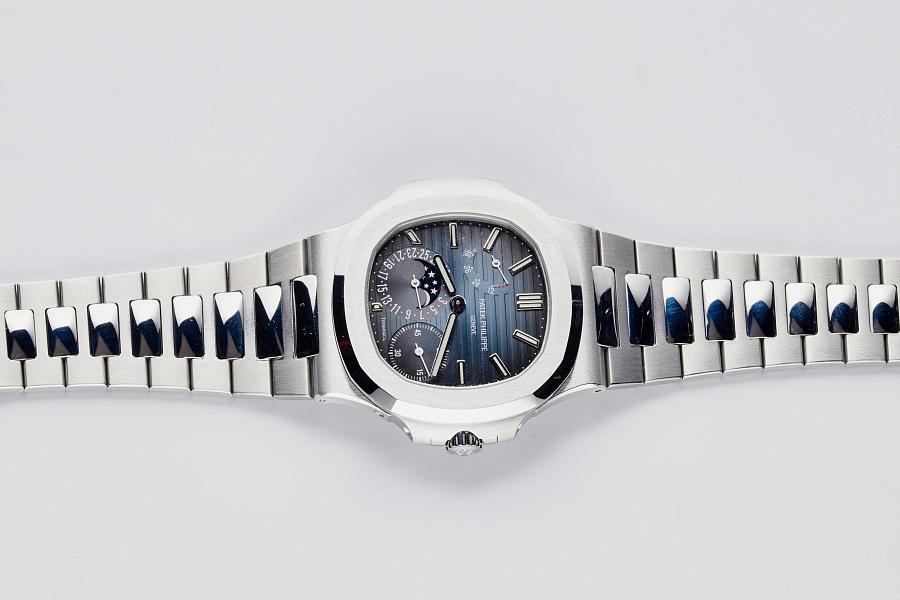 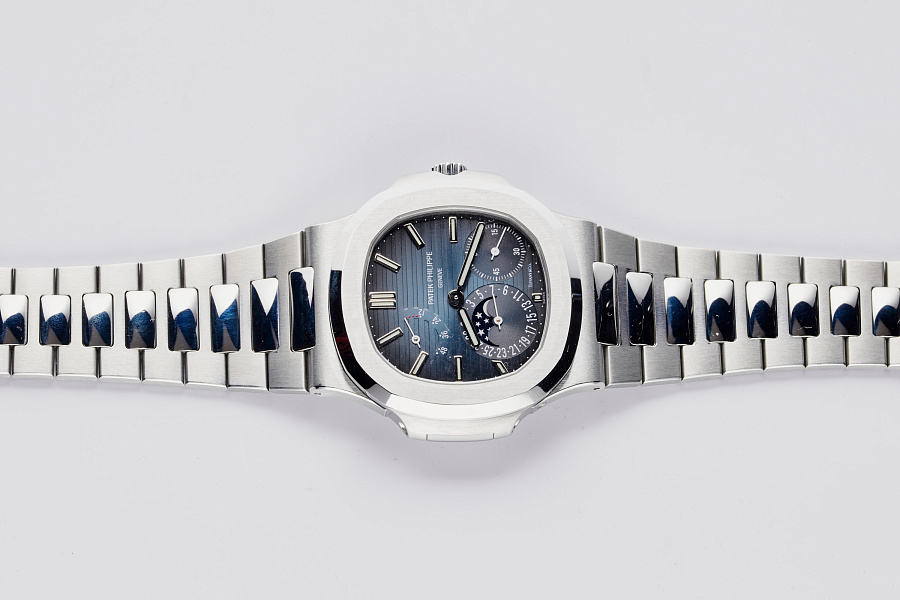 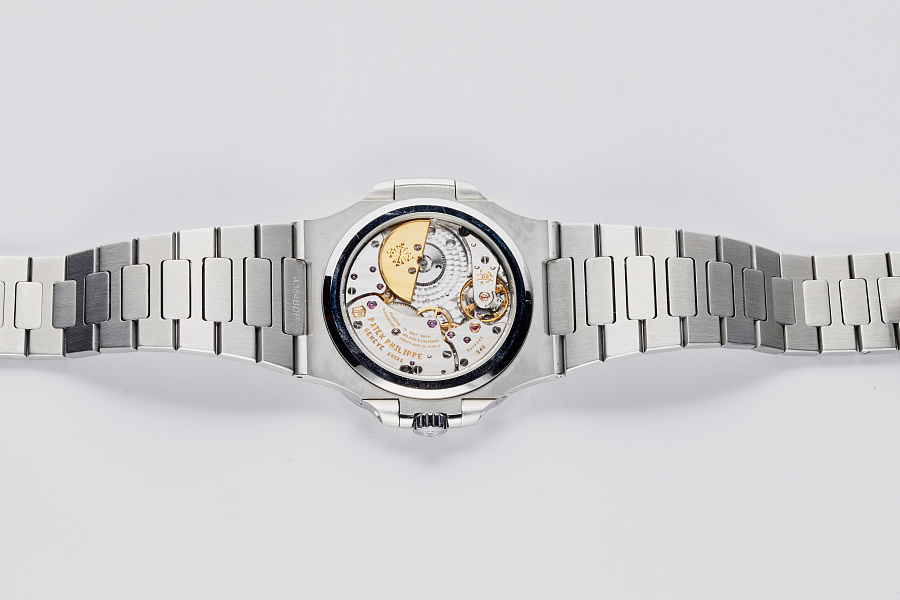 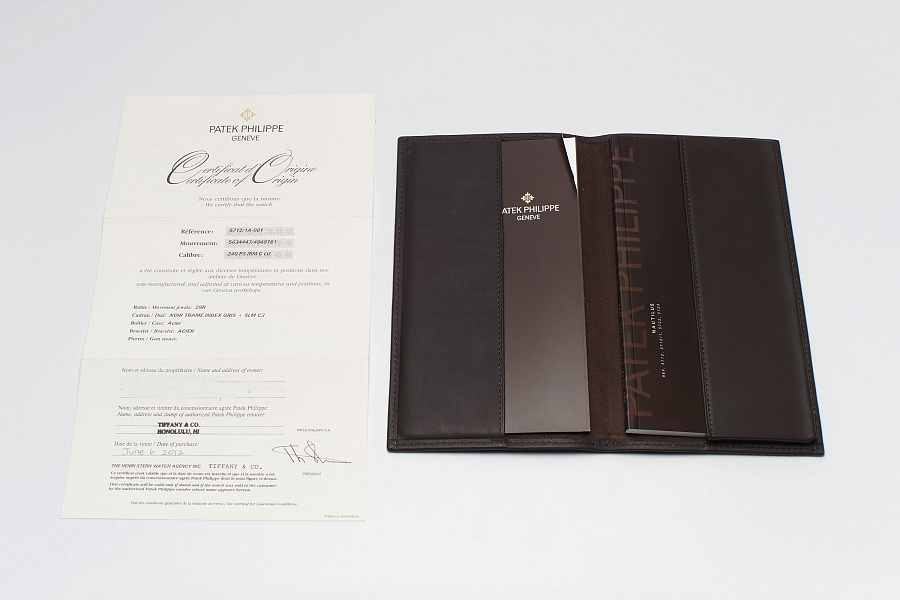 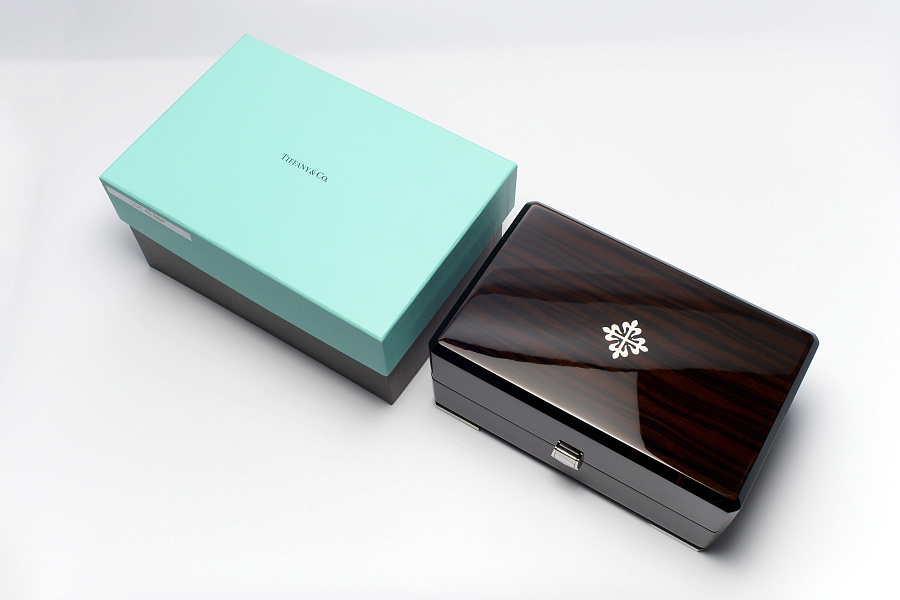 In 2006, to commemorate the 30th anniversary of Nautilus, the first Patek Philippe sports watch, the brand introduced several new references. These included Ref. 5711, a new version of the original Nautilus ‘Jumbo’; the automatic chronograph Ref. 5980 in steel; and the date and moonphase Ref. 5712, the present reference. Nautilus Ref. 5712 was launched as a modified and reasonably large version of the previous moonphase, power reserve and date Ref. 3712/1A-001, the first ever Nautilus to house the base calibre 240 with a mini-rotor. Production of Ref. 3712 started in 2005 and was discontinued in 2006 with the launch of Ref. 5712/1A-001.

The main feature that defines the attractiveness of this already extremely valuable and desirable watch is the dial marked ‘Tiffany & Co.’

Reference 5712/1A-001 features the ultra-thin caliber 240 PS IRM C LU, self-winding with an off-centre mini-rotor. Examples from the early production period of this reference were fitted with movements marked with the prestigious Poinçon de Genève quality seal. In 2009, Patek Philippe announced that it would be phasing out the Poinçon de Genève in favour of marking their own, even more stringent, quality standards with the Patek Philippe quality seal. The present example comes with the Patek Philippe seal and belongs to the third generation of reference 5712/1A-001, distinguished by the presence of the aforementioned Patek Philippe seal and the ‘240’ caliber marking.

The main feature that defines the attractiveness of this already extremely valuable and desirable watch is the dial marked ‘Tiffany & Co.’ The American jeweller and retailer is a historical partner of Patek Philippe, greatly contributing to the dynamic development of the Genevan brand in the 19th century and retaining its prestigious status as the official seller of Patek Philippe watches in the US market ever since. The rare examples of the Nautilus 5712 marked ‘Tiffany & Co.’ are now highly sought-after by collectors, commanding extraordinary and increasing prices in the vintage watches market.

The stainless-steel Nautilus ‘Tiffany & Co.’ Ref. 5712/1A-001, with the rare and desirable ‘Tiffany & Co.’ signature, is an extremely charismatic, important and rare complicated mechanical watch from a world-famous watch brand

The ’gold rush’ of double-signed watches has increased significantly in the past few years, and the recent release of the special Nautilus with dials in the ‘Tiffany’ turquoise colour has further fired up the market.

Nowadays, due to the incredible popularity of Patek Philippe Nautilus watches, Ref. 5712/1A-001, (along with several other Nautilus references) is seeing a fabulous increase in prices in the previously worn watch market, indicating significant interest in this item as a collectible and as an investment. The stainless-steel Nautilus ‘Tiffany & Co.’ Ref. 5712/1A-001, with the rare and desirable ‘Tiffany & Co.’ signature, is an extremely charismatic, important and rare complicated mechanical watch from a world-famous watch brand, the market leader in haute horlogerie and complicated timepieces. The mini-rotor ultra-thin caliber is executed with Patek Philippe’s impeccable technical workmanship and exquisite artisanal finishing of all parts, confirmed by the presence of the Patek Philippe quality seal. The equally high-end finishing of the case and integral bracelet, and the notable design, undoubtedly make this lot even more attractive.