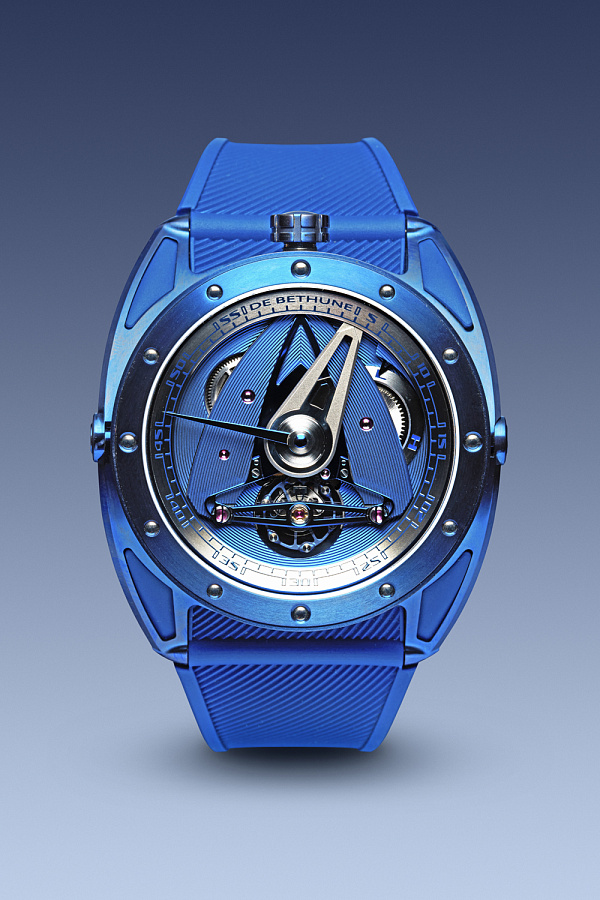 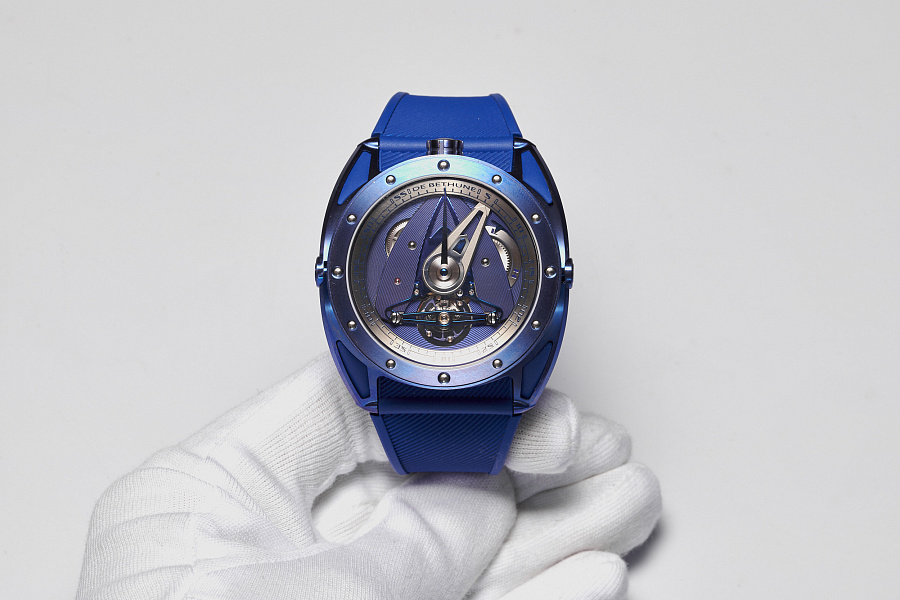 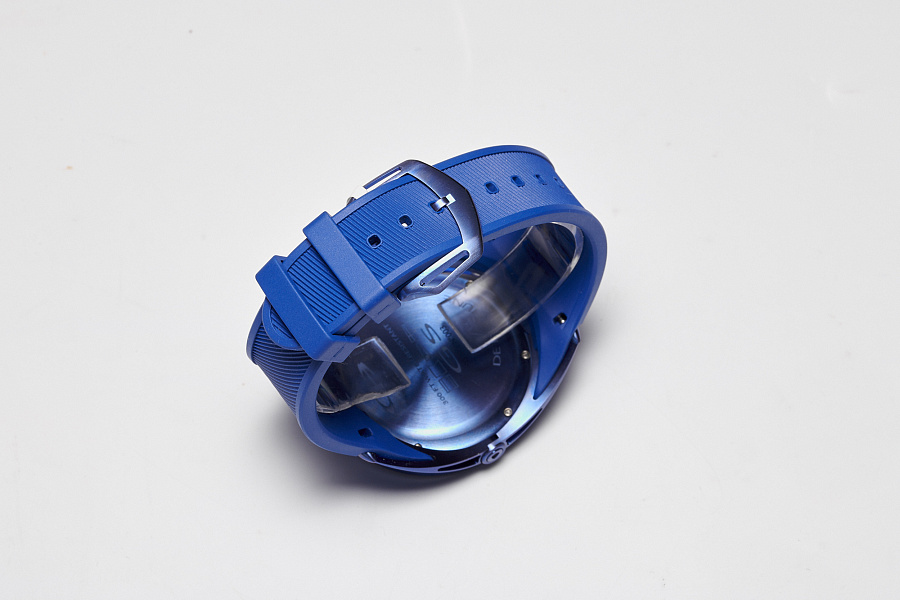 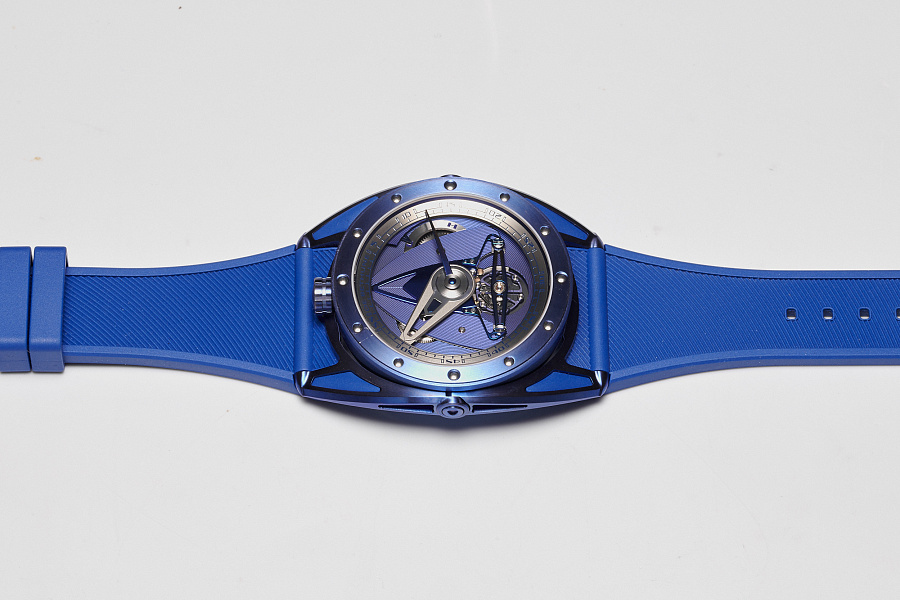 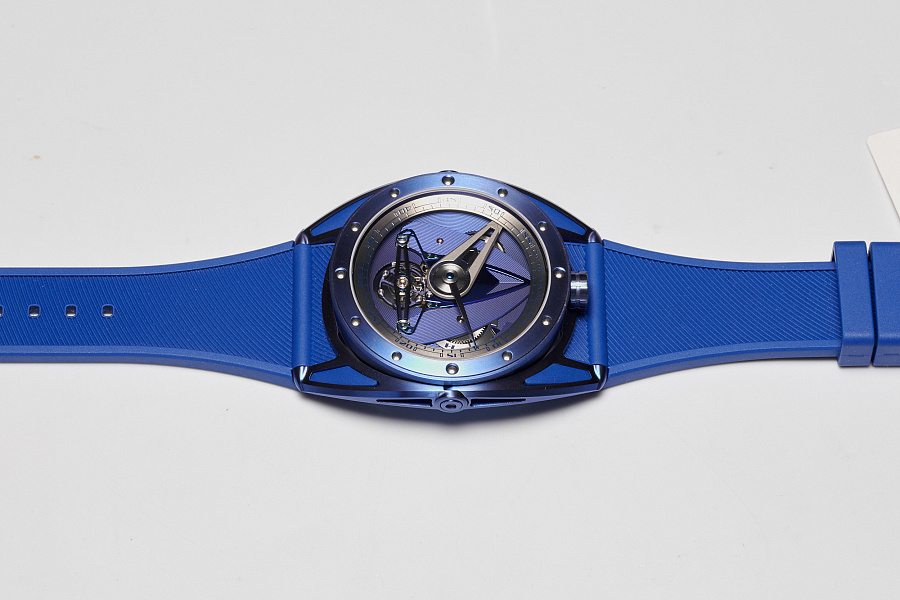 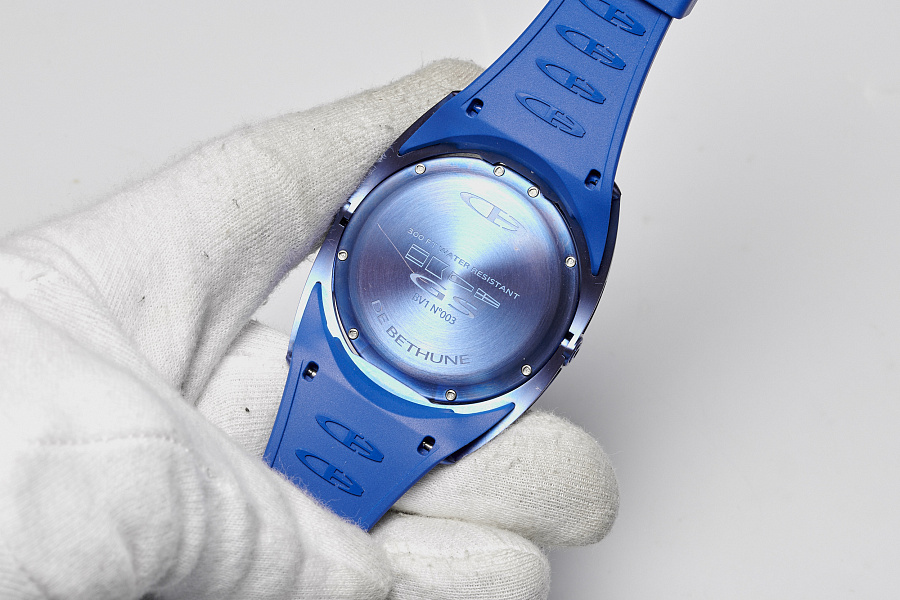 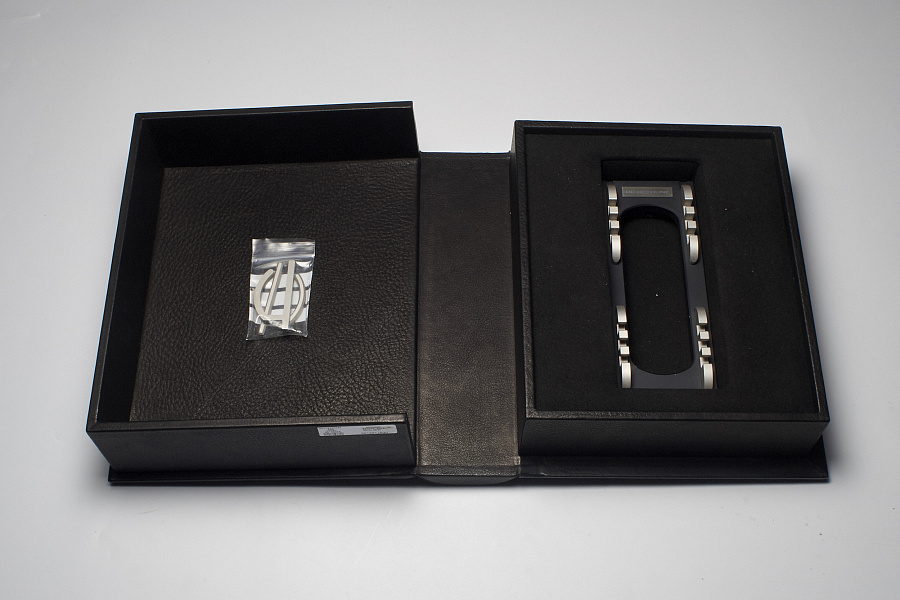 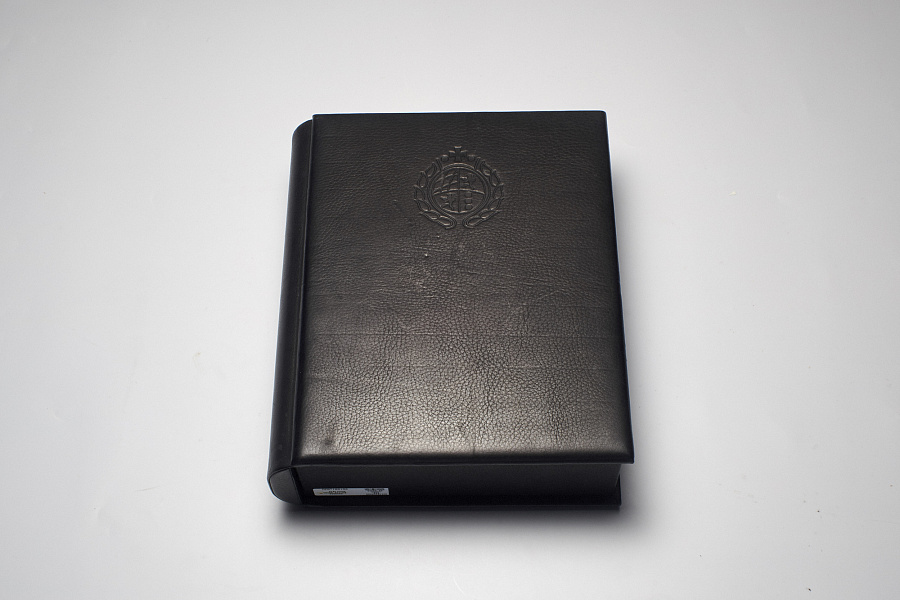 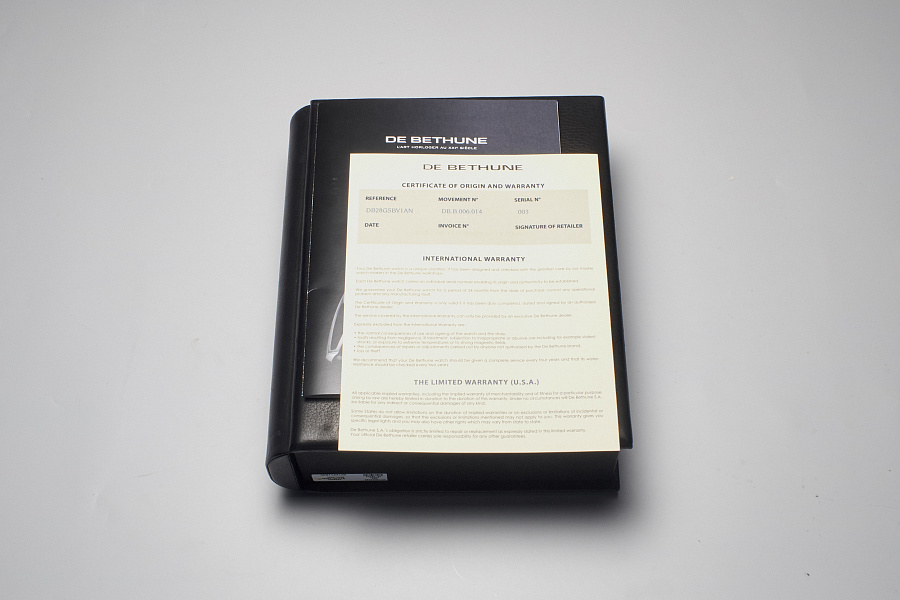 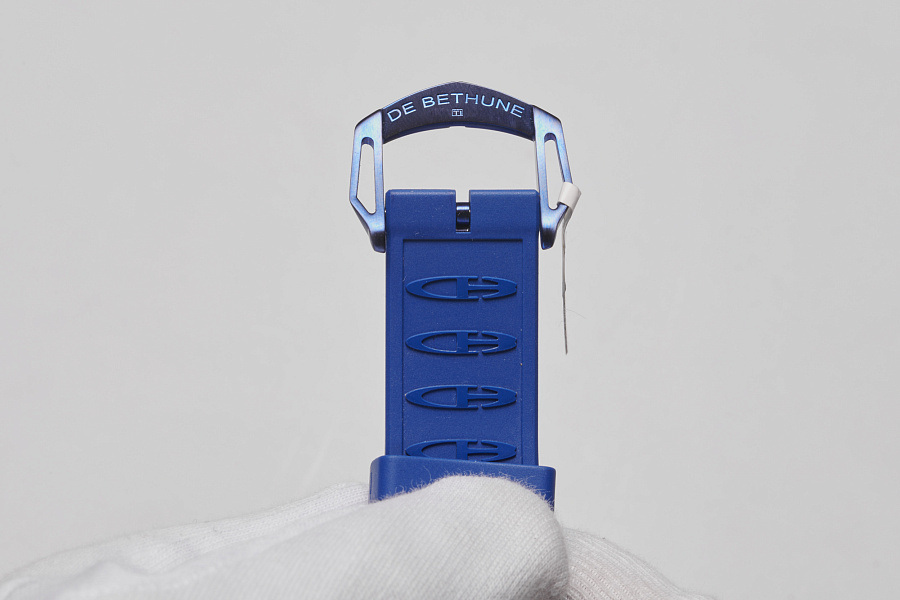 The present example is the 2018 blue version of the DB28 Grand Sport model launched in 2015. The core DB28 collection, introduced in 2010, was one which definitely opened a new era in the development of the brand. Several innovations have contributed to both raising the brand’s image as a pioneer, and to the practicality and convenience of the watch. In particular, the ‘floating’ spring-loaded lugs of the strap allow the watch to adjust to the wrist when you put it on, giving a very special feeling. Despite having two barrels for a 6-day winding, caliber DB2115 is remarkably thin, coming in at just 4.5mm. The reversed structure of the movement, which was later perceived as one of the brand’s trademarks, allowed the highlighting of other inventions from Denis Flageollet, the horological mastermind behind the brand. In the present example these include a titanium balance wheel with white gold weights, a De Bethune hairspring with flat terminal curve, and a unique triple shock resistance system with blued polished steel flat fixing springs and a carefully finished blued steel horizontal bridge. The high technical characteristics of the caliber are accompanied by attractive aesthetics with fine artisanal finishing of all components, and fine grooves following the shape of the movement’s blued bridges on the dial side. High-end finishes are also characteristic of the case and dial parts, enhancing the perceived value of the watch.

The high technical characteristics of the caliber are accompanied by attractive aesthetics with fine artisanal finishing of all components, and fine grooves following the shape of the movement’s blued bridges on the dial side.

On the caseback, along with the engraved inscriptions “300 ft water resistant”, “De Bethune”, the early serial number “BV1 No.003”, and the emblems of the brand and Grand Sport collection, there is an inscription indicating “DB28”, which is made with the flags of the international maritime signal system. That is why this model is sometimes called the ‘Grand Sailor’.

The DB28 Grand Sport ‘Grand Sailor’ Ref. DB28GSBV1AN is an extremely attractive purchase for the collector and De Bethune watchmaking expertise aficionado, with an opportunity to obtain an extremely rare, beautiful, and unusual mechanical sports watch from this famous independent watch brand, one of the undoubted leaders in the haute horlogerie watch market. The combination of impeccable technical workmanship, an important and unusual complicated caliber with a visible balance and power reserve indicator complication, exquisite artisanal finishing of the movement, a special and very rare design of case in blued titanium with ‘floating’ lugs and a charismatic dial with opened movement featuring fine finishing, undoubtedly adds to the appeal of this lot.

The keen collector should note that also offered for purchase in this sale is another extremely rare ‘all blue’ De Bethune watch – the DB28 Kind of Blue ‘Golden Hands’ Ref. DB28BTIBN. It is definitely an excellent chance to add a De Bethune blue double to a collection.